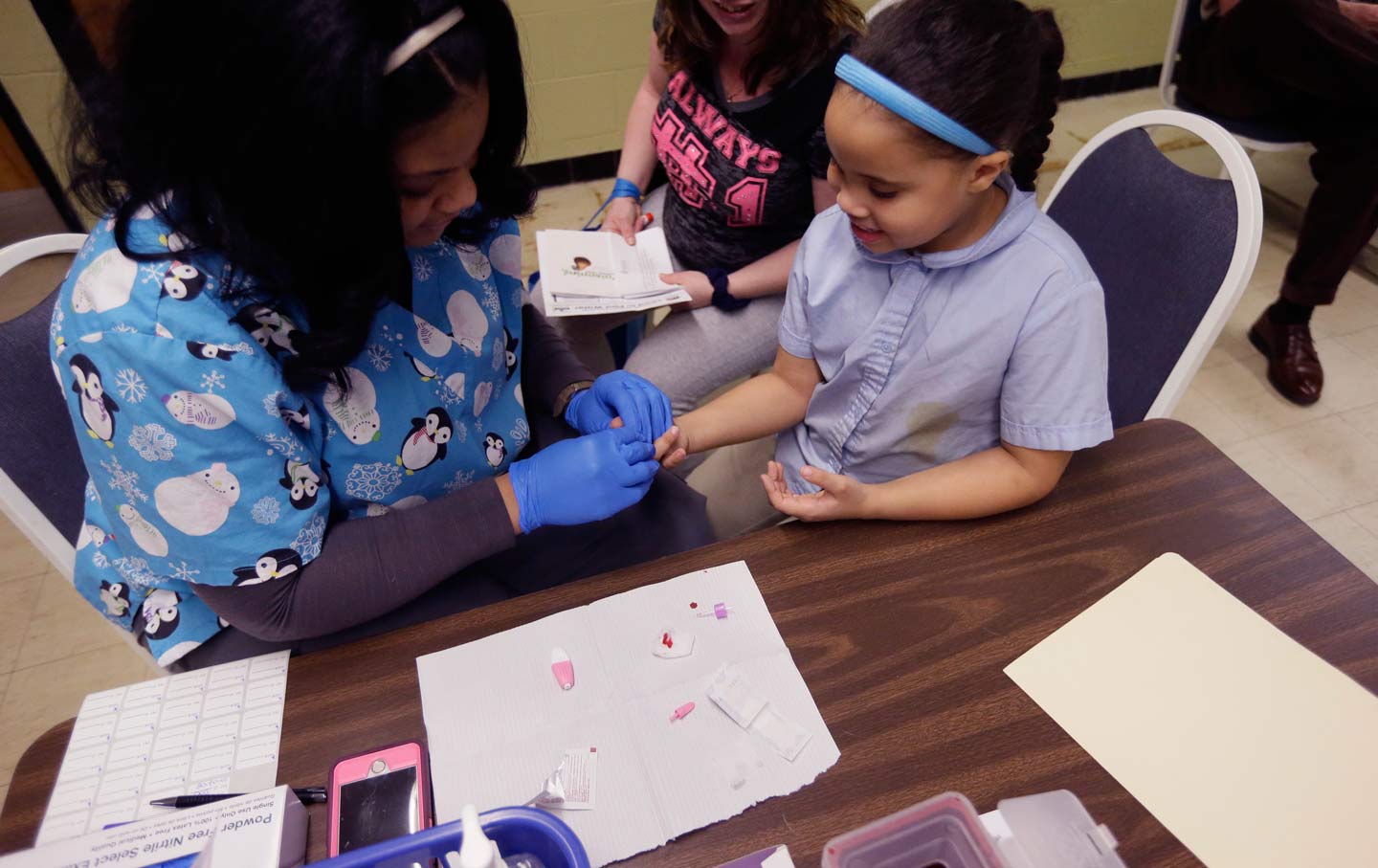 Long before people in Flint, Michigan, had to worry about brownish, putrid-smelling, lead-laced water, they worried about poisoned air. In 1992, the Michigan Department of Natural Resources approved a permit for a new power plant in a predominantly African-American neighborhood in Flint that was already home to a cement plant, an asphalt plant, and other hazardous facilities. The power station is fed with demolition wood, some of it covered in chemicals and lead-based paint, which can release toxic particles when it’s burned.

Community members, including a Catholic priest named Phil Schmitter, complained to the Environmental Protection Agency, arguing that the state violated residents’ civil rights when they allowed yet another polluter to operate in the neighborhood. According to the complaint, the decision reflected a pattern in the state of siting toxic industrial facilities in communities of color. The EPA’s Office of Civil Rights (OCR), which is supposed to police discriminatory decision-making by agencies and private companies that receive federal funding, said it would initiate an investigation in 1995. More than a decade later the agency sent a few employees out to look at the incinerator, Schmitter told me, but that was the last he heard from them. The office still has yet to release even preliminary findings.

“Twenty-one years,” Schmitter mused when I called him this week, a time lapse during which most of the other community leaders who worked to oppose the incinerator have died. “I find that egregiously offensive.” He can’t say exactly what the effect of the power plant has been on the surrounding community, which includes a school and public-housing units, because “nothing has ever been done to find out, by the state or the federal people.” The way the OCR handled that complaints is par for the course, according to environmental-justice advocates, who believe the office’s reluctance to crack down on discrimination at the state level has helped perpetuate a cycle of environmental racism not just in Michigan but across the country.

“Absolutely not,” was the response Michigan Governor Rick Snyder gave when asked if the decision to switch Flint’s water supply to a cheaper, more polluted source, and his administration’s flagrant lack of concern for residents’ health, had anything to do with the fact that the majority of Flint’s residents are black, and many poor. Snyder has blamed the crisis instead on a “handful” of incompetent bureaucrats. But as Flint Mayor Karen Weaver pointed out, it’s hard to imagine that residents in a wealthy, white suburb would be ignored and belittled for nearly two years while their children were slowly poisoned.

People in Flint—and in many other communities of color across the country—routinely bear the brunt of environmental degradation and industrial pollution, and are regularly ignored by the officials who are supposed to protect them. For instance, a report released this month by the Center for Effective Government found that people of color are nearly twice as likely than whites to live near facilities that process dangerous chemicals. Michigan’s most polluted zip code—a Detroit neighborhood surrounded by oil refineries, steel plants, coal incinerators, and salt mines that release some 1.6 million pounds of chemicals into the community each year—is 84 percent African-American, and has higher pediatric asthma and lung cancer rates than most other parts of the state.

As was the case in Flint’s water crisis, state and local agencies are mostly responsible for the development of toxic industrial zones and for ignoring public-health threats in minority communities. But a major failing is occurring at the federal level, too. Title VI of the 1964 Civil Rights Act prohibits recipients of federal funds—such as state environmental agencies—from making decisions that have discriminatory impact. The EPA’S Office of Civil Rights is supposed to police that beat by following up on complaints like the one about the biomass power plant in Flint, and by initiating affirmative investigations of its own. It should be an important backstop for communities who’ve been failed by their local officials, but it hasn’t exactly worked out like that.

The office has received over 300 discrimination complaints since it was established in the early 1990s. The agency has never once issued a formal finding of a violation. Instead, nine in ten communities that seek help from the EPA have had their claims rejected or dismissed, in many cases without an investigation, according to a recent analysis by the Center for Public Integrity. In one case, the EPA took over a decade to address a complaint that Latino schoolchildren in California were disproportionately exposed to a pesticide that can cause cognitive disorders. Although the EPA eventually made a preliminary finding that discrimination had occurred, it did not issue a formal violation and instead reached a settlement with the state’s Department of Pesticide Regulation that provided no compensation to the families and failed to stop farmers from spraying pesticides near schools.

“The single greatest determinant of where certain kinds of toxic sources are located, like hazardous waste facilities, is race, and yet [the EPA has] never once made a finding of discrimination, and they very rarely use any of the other tools at their disposal to push states or localities or private actors to change their behavior,” says Marianne Engelman Lado, an Earthjustice attorney who is suing the EPA on behalf of Flint and four other communities whose civil rights complaints have been unaddressed.

“There are no incentives for states to worry about the EPA cracking down on them,” says Brent Newell, legal director of the California-based Center on Race, Poverty & the Environment, who has been working on Title VI cases for about 25 years. In the case of the Flint water crisis, “there was no cop on the beat, and Michigan knew it.” Newell chalks the problems up to Congress’s not giving the EPA enough money to do its job, along with imbalanced budget allocation within the agency, and a culture that prioritizes what are sometimes weaker environmental laws over stricter civil-rights standards. “The agency is very busy rearranging the deck chairs on the Titanic, but they are not implementing reform that is going to make a difference in Flint or anywhere else,” Newell says.

In 2011, the consulting firm Deloitte released a report that described a “record of poor performance” in the civil-rights division, due to poorly qualified and trained staff, management issues, and the prioritization of “minor responsibilities” instead of “the critical discrimination cases affecting employees and disadvantaged communities.” In response, then–EPA Director Lisa Jackson promised the agency would “move quickly to address the issues raised in the report.” Nearly five years later, advocates say little has changed.

Instead, the EPA recently proposed changes to its rules for complying with Title VI, a move that justice advocates see as an attempt to evade legal responsibility when it fails to respond to allegations of discrimination. The proposed changes would eliminate the deadline for addressing complaints, and would give the agency more discretion to ignore them. Newell believes “the EPA is trying to change the rules to eliminate its liability—to protect itself from the people it’s supposed to protect.” He continued, “They do not want to be taken to court by complainants and be held accountable for not acting.”

In response to questions, an EPA spokesperson sent a statement that reads, in part, “The proposed amendments to EPA’s nondiscrimination regulation are just that—proposed. We are currently in a public comment period and look forward to engaging with the public on the proposal. This proposed rulemaking is a part of EPA’s suite of critical measures to ensure prompt, effective, and efficient civil rights nondiscrimination complaint docket management and to enhance the Office of Civil Rights proactive compliance program.”

In the context of the Flint crisis, there’s an important distinction between critiques like Newell’s and Lado’s, and those offered by, say, Donald Trump, who recently argued that the EPA is “really guilty of” a “horror show” in Flint, and that its funding should be subjected to “tremendous cutting.” It does appear that regional EPA officials buried critical warnings from water expert Miguel del Toral, and that, more broadly, the agency has failed to use its authority under the Civil Rights Act to challenge patterns of environmental racism. But Lado, who is hardly a defender of the EPA’s civil-rights record, doesn’t think the answer is to cripple the agency even further. “[EPA is] on the defensive all the time, with the right-wing accusing them of overreach, or really pursuing them in every form possible,” Lado said. “And then when something happens, like Flint, all of a sudden it’s EPA’s fault. If we really want a federal agency to do its job, we have to give it the resources.”