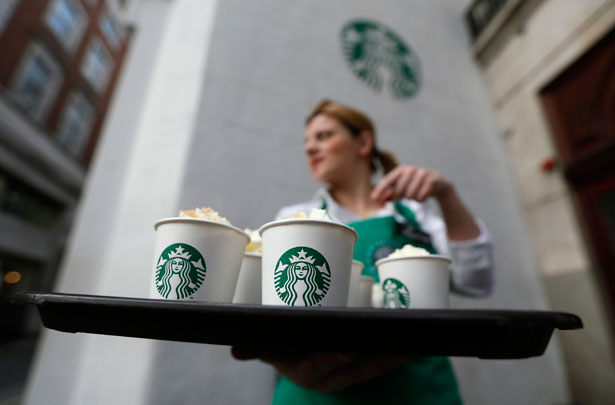 Starbucks is a brand of contradictions: it’s the crême de la crême of fast food, blending high-brow coffee culture with middle-brow commercialism. And its workers represent a stylishly liminal “barista class” hovering between upward mobility and millennial stagnation. But as Starbucks industrializes global cafe culture, the company’s “partners”—their preferred term for “workers”—face a growing labor crisis, percolating just beneath the surface of the coffee brand.

The New York Times explored the lives of the Starbucks precariat last week with a feature on Jannette Navarro, a 22-year-old single mom doing the barista hustle in San Diego. As she juggles erratic hours, her family life has become consumed by financial stress. Her workdays are tightly scheduled through an ultra-efficient computerized program. But the logistical automation leaves workers subject to scheduling volatility that interferes with household budgeting, from Navarro’s childcare expenses to her lapsed college plans.

Starbucks spins this kind of instability as an asset: they call it “flexibility.” The emancipatory ring of that term suggests what CEO Howard Schultz calls the company’s “employees first” philosophy—keeping workers happy to boost performance. Just as you can personally flavor your own latte, the company’s system of not giving set schedules is all about a freewheeling, enterprising lifestyle. Baristas can embrace this slippery work/life balance with “your special blend” of “rewards,” such as health benefits and partial tuition assistance (relatively rare in low-wage service work). So goodbye forty-hour work week, hello flexible work life, with barista shifts filling the hours between philosophy seminars and band practice.

But a new report by the Starbucks Workers Union (SWU) argues that the coffee giant fails to fairly source its labor. Drawing on the company’s data, the union, an affiliate of Industrial Workers of the World, argues that “partners” are tethered to miserable wages and schedules akin to those suffered by other fast-food workers, and workloads are intensifying despite unsustainable pay scales. Compared to the dramatic growth in corporate revenues, SWU says, the supposedly progressive company is denigrating the employees it claims to put “first.”

While baristas typically scrape by on less than $10 an hour, the company has transferred a cumulative total of about $3.7 billion to shareholders from 2010 to 2013, through dividends and repurchased shares, according to the report. The union points out that the company’s “improved performance is due to the hard work of the nearly 200,000 Starbucks workers,” mostly “low-wage store baristas who serve the customers every day.”

In response to criticisms of its treatment of workers, Starbucks spokesperson Zack Hutson tells The Nation that the company “strives to be flexible to accommodate their commitments outside of work,” and that the company is “very proud of our progressive workplace,” including its compensation and benefits package. He also says that the SWU does not speak on behalf of the entire workforce, and, “While we respect the free choice of our partners to affiliate with unions, we believe that the direct employment relationship we currently have with our partners is the best way to help ensure a great work environment.”

Meanwhile, following the Times story, in another gesture of “corporate social responsibility,” Starbucks declared it would reform and upgrade its scheduling practices, better enforce its existing policy of posting workers’ schedules with a week’s advance notice, and make concerted efforts to ensure that workers live within an hour’s commute of their stores. But labor advocates dismissed these measures as too limited; after all, one-week’s notice won’t help workers accommodate a monthly daycare program for their kids, or plan for next semester’s classes.

The labor dilemma facing Starbucks and other service brands reveals a grinding friction underlying their corporate and consumer culture: a slick cultural aesthetic is fueled by a brittle illusion of middle-class stability, which is, amid global economic tumult, unraveling for the workers, and for the young professionals they serve. Behind the image of the perky barista, Navarro’s daily life isn’t nearly as “put together” as the brand suggests: her schedule forces her to shift childcare duties onto her increasingly frustrated family members. Constantly fearing any slip in her schedule, she struggles with the grueling “clopening”—the double-duty of closing and opening the store in back-to-back shifts.

In response to the announced scheduling reforms, SWU organizer and former barista Sarah Madden tells The Nation via e-mail that the company should “take Ms. Navarro’s story to heart and try to set an industry standard for scheduling in the food and retail industry.” A more equitable system, she suggests, would be “to post workers’ schedules a month in advance and meet hour and scheduling requests based on seniority.” Such an arrangement would help baristas “attend school, make doctors appointments, schedule childcare and plan our futures.”

For many marginal workers in irregular service jobs, flexibility tends to work in the management’s favor, not theirs: a variable schedule is not a perk when you’re grasping for enough hours to make rent.

According to Joe S., a barista and SWU activist, flexibility is done to workers rather than provided for them: “‘Flexibility’ is a euphemism for forcing chaotic, inconsistent schedules onto low-wage workers, and I have seen firsthand how this ‘flexibility’ has negatively impacted educational and family commitments outside of the workplace.”

Activists also view with skepticism the company’s latest initiative for helping baristas advance themselves: a much-hyped tuition-discount plan offered through Arizona State University’s online degree program. Joe S. tells The Nation via e-mail that the tuition benefit, which phases in during the last two years of college, just isn’t realistic for many struggling rank-and-file workers: “To many of us, it felt like a PR campaign designed to bolster the company’s public image, not help its employees, while issues like the pay that baristas receive, which often falls below the Federal Poverty Line, are swept under the rug.”

Of course, poor workers do need “flexibility,” because rough hours and day-to-day hardships mean there’s little financial “give” in their family lives. But this flexibility requires worker empowerment, protective labor legislation, and control over job conditions. So SWU seeks to organize workers to demand more secure wages and schedules. That in turn would allow employees to see their barista gig as potentially a long-term, decent livelihood worth investing in. Though Starbucks is not a union shop in the United States (despite notable labor campaigns in overseas branches), simple reforms like fairer scheduling rules, Madden says, “will change the work environment instantly, removing unnecessary stresses on workers,” which can help stabilize the workforce and decrease turnover.

The contrast between Starbucks’s astronomical profits and the precarity of the barista’s daily grind highlights tensions in a young workforce that, despite the “partner” label, is chronically strapped. And many now realize instability isn’t part of a go-getter lifestyle.

For workers without security, in workplaces that lack a supportive structure to negotiate labor conditions, flexibility can be dangerous—more about compromising than finding “your perfect blend.” There’s precious little room for flexibility when you’re already stretched to a breaking point.