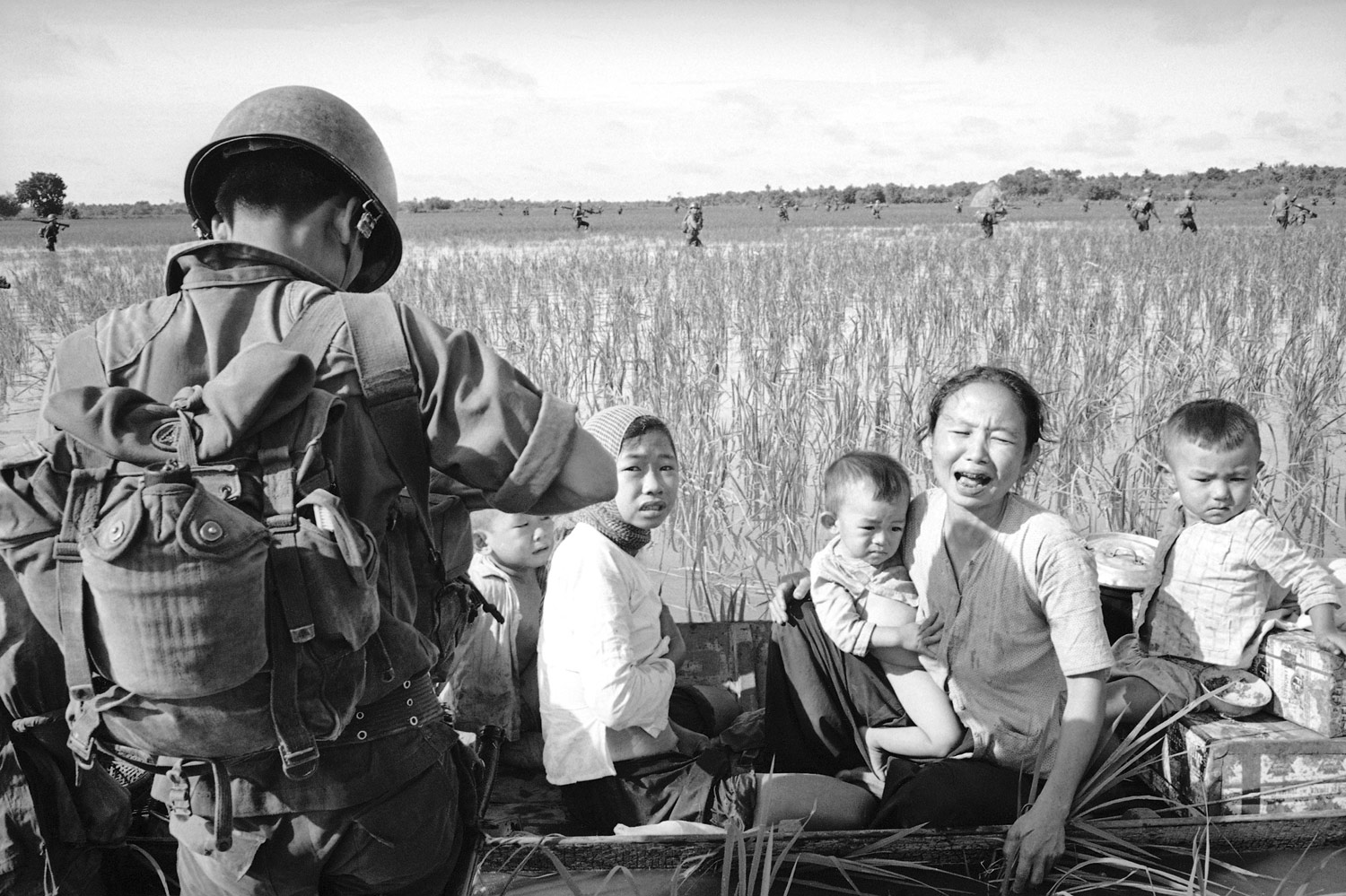 Villagers displaced by a US Army operation, March 1966 (AP Photo/Huynh Thanh My)

At the beginning of Last Days in Vietnam, Rory Kennedy’s Oscar-nominated documentary about the chaotic final days of what the Vietnamese call the American War, an American man tears up, struggling to maintain his composure. “It was a terrible, terrible, terrible moral dilemma,” he says, choking on his words.

“Terrible” is a perfect word to describe the conflict: close to 4 million violent war deaths, about 2 million of them civilians—most of them in South Vietnam—millions more wounded, 11 million made refugees. But the former US Army officer, Stuart Herrington, wasn’t talking about anything of that sort. The dilemma in question had to do with whether a US-allied South Vietnamese army colonel should decide to abandon his post, his army and his country and flee with his family to the United States—surely a gut-wrenching personal choice, but microscopic in a war that saw suffering on an almost unimaginable scale.

So goes the rest of this much-hailed documentary that focuses on harried, haphazard, sometimes even mildly heroic efforts by Americans to slip South Vietnamese friends out of the country on planes, ships and finally helicopters as North Vietnamese forces push ever closer to the South’s capital, Saigon. The film keeps a tight focus on this particular aspect of the end of that grim war, while rehashing tired canards and distorting history in ways large and small. In so doing, it offers a classic American yarn about the good intentions of well-meaning Americans whose chief desire, in a land that their country had helped to decimate, is to save Vietnamese lives under difficult conditions—and the terrible intentions of barbaric communist hordes bent on a bloodbath. (Never, mind you, are viewers made aware of a single reason Vietnamese might have a gripe about successive US-backed South Vietnamese regimes that imprisoned, abused, tortured and killed their own people.)

For example, Last Days in Vietnam contends that once the US military pulled its last ground troops out of South Vietnam, after the signing of the Paris Peace Accords in 1973, North Vietnam simply bided its time, waiting until Watergate paralyzed Washington before setting upon the South, which is portrayed as a sitting duck. There’s even a map with a spreading, blood-red stain to indicate communist advances, akin to the creeping communism commonly depicted in Cold War–era graphics. There’s no indication that in fact both sides began violating the accords almost immediately, fighting tooth and nail for territory, and that neither ever showed any real interest in a political settlement.

At such a late date, this warped history serves only the interests of the cynical US architects of those accords and the failed policies that followed, chief among them Henry Kissinger, President Gerald Ford’s secretary of state and national security adviser at the time of Saigon’s collapse. Kissinger anchors a cast of talking heads that also includes former CIA analyst Frank Snepp; Richard Armitage, a Special Forces adviser who went on to serve in George W. Bush’s State Department; and lesser-known functionaries like Herrington, as well as a tiny set of South Vietnamese, half of them former military men.

Kissinger—architect of the secret, murderous bombing of neighboring Cambodia and top adviser to a president who resigned rather than face impeachment—is given carte blanche to craft his own self-serving version of history and to champion another former boss, President Ford, as a humanitarian. “He had two major concerns. The first was to save as many people as we could. He cared for the human beings involved,” Kissinger says. This is the Gerald Ford, mind you, who as a congressman pressed Lyndon Johnson’s administration to increase US bombing; the Gerald Ford who cheered President Nixon’s escalation of the war; the Gerald Ford who attempted to use the massacre of more than 500 Vietnamese civilians by US troops at My Lai for partisan gain; the Gerald Ford who waited until April 1975, when South Vietnam was nearly defeated, to ask for $722 million in emergency support for Saigon, to do what billions and billions over a decade had failed to do—a hollow gesture that he knew stood no chance of passage in Congress.

In the same vein, low-level functionaries are allowed to spout off, unchallenged, presenting painfully decontextualized rewrites of history. “The South Vietnamese population had ample reason to fear the Vietnamese communists. The communists’ conduct throughout the course of the war had been violent and unforgiving,” says Herrington at one point. Drivel like this runs throughout Last Days in Vietnam. Not that America’s enemies weren’t violent or that they didn’t kill civilians, but who were the “South Vietnamese population,” and who killed them most often, and who most deserves the label “violent and unforgiving”?

As I watched this collage of tired talking heads and uninspired footage from the era, my mind kept wandering back to Ho Thi Van and countless other Vietnamese I’ve interviewed over the years. As a young teen, she huddled in a bomb shelter during intense artillery shelling of her hamlet, escaping out a rear exit just as US Marines shouted for the “mama-sans” and “baby-sans” (women and children) to come out the front. She got as far as the nearby river before she heard gunfire. Returning the next day, she encountered a scene that was seared into her brain. “I saw dead people piled up in the hamlet. I saw my mom’s body and my younger siblings,” Ho Thi Van told me decades later. She lost eight family members in that 1968 massacre. In all, according to the local survivors, thirty-seven people—including twenty-one children—were killed by the Marines.

Her family nearly wiped out, Ho Thi Van joined the guerrillas and fought the Americans and their South Vietnamese allies until she was grievously wounded, losing an eye in battle in 1973. Offered the chance to be sent to North Vietnam for treatment of her remaining, badly injured eye, she refused, even after being told she could lose it. “I didn’t want to go because my mom and my siblings were killed here. If I had to die, I’d rather die here with them,” was how she explained her decision to me. After recovering, she soldiered on until April 30, 1975. To her, that date didn’t mark the “fall” of Saigon; it was liberation, a dream passed down over the generations, from parents who had opposed the French colonialists and their South Vietnamese collaborators in a war bankrolled and then taken over by the United States.

Ho Thi Van wasn’t North Vietnamese. She lived in the South. To her, to her hamlet, to millions of her fellow Vietnamese, the United States—Stuart Herrington’s military—was the violent and unforgiving force of that war. Indeed, it was profligate US firepower, not North Vietnamese troops, that turned so much of the South Vietnamese countryside red with blood (not to mention the destruction of huge swaths of its lush green vegetation with toxic defoliants like Agent Orange). Nothing in Last Days in Vietnam offers as much as a clue about any of this. In fact, if not for the stock footage of 1970s Saigon streets, you wouldn’t know women were involved in the war at all. Not one woman is interviewed in a film that repeatedly refers to Vietnamese wives, girlfriends and “mistresses” of US personnel.

Americans interested in learning about the real American War—beyond a decontextualized micro-history of its last blunder-filled and outrageous moments—won’t find much of use in Last Days in Vietnam. Still, the film is a must-see for future quislings, proxies and allies tempted to sign on to American projects abroad; for men and women who might be attracted by billions of dollars, high-tech weaponry and seemingly sincere promises—like Richard Nixon’s January 1973 pledge to re-enter the war with the “full force” of American power, a vow that helped induce the South Vietnamese government to sign the 1973 peace agreement.

Toward the close of the movie, Stuart Herrington—the author of several books, including Silence Was a Weapon: The Vietnam War in the Villages, about an earlier stint as an adviser in Vietnam—appears again. He’s made one final promise to hundreds of Vietnamese still crowded on the US Embassy grounds on the final day of the evacuation—perhaps the last American promise offered to the men and women who threw in their lot with the wealthy, well-armed foreigners. “Nobody is going to be left behind,” he told them. One of the Vietnamese who was there remembered his words: “When you are in the American Embassy, you are [on] American soil. I promise [that] me and my soldiers will be the last ones to leave the embassy.”

With 420 Vietnamese still waiting but with orders from Washington that the airlift was over, save for the last Americans, Herrington assures them that a big helicopter is coming for them and then excuses himself to go “take a leak.” Scurrying off into the shadows, he sneaks into the embassy building and onto a helicopter, abandoning those to whom he’d just given his word. Consider it not just a fitting end for the American War, but a warning to America’s current and future allies. It’s the most honest thing to come out of Last Days in Vietnam.

Here’s a postscript that doesn’t appear in the film: those frantic final moments at the embassy weren’t actually the “last days in Vietnam.” The entire country, knitted back together after the Americans flew off, has been around every day since. As it happens, those weren’t even the last days for Americans in Vietnam. Take a walk in Saigon or Hanoi or Hoi An today, and you can be sure of that. They weren’t even the last days of the American War. Every year since 1975, Vietnamese have been killed or injured thanks to the leftover US ordnance that still litters the landscape. This never-ending horror could, of course, be remedied if enough Americans cared about saving Vietnamese lives, as the stars of this documentary claim they did. After all, what kind of people seed a foreign land with hundreds of thousands of tons of explosives and then allow succeeding generations to lose eyes and limbs and lives? Only a “violent and unforgiving” people could do such a thing. Someone should make a movie about that.