Over the past several months, the likelihood of the United States’ engaging in military conflict with Iran has increased dramatically. President Donald Trump declared that he would pull of of the Iran deal, despite full compliance from Iran. Trump fired Secretary of State Rex Tillerson, one of the key supporters of the Iran deal within his cabinet, and ultra-hawk John Bolton will become the president’s new national-security adviser on Monday.

But can Trump actually build public support for another bloody and costly war? Maybe not broadly, but our new research indicates there is a receptive audience for armed conflict with Iran: Americans who are most accepting of racism, and most hostile toward Muslims. Fifteen years after the United States invaded Iraq, there is still limited understanding of the ways that comfort with systemic racial inequalities and racist attitudes toward people of color translate to public support for war.

The most prominent supporters of the Iraq war, and other interventions in the Middle East, have often let their mask slip. Thomas Friedman, for instance, explained that the purpose of the Iraq war was to tell the Arab world to “suck on this.” Christopher Hitchens spent the later years of his life defending the Iraq War on right-wing media and claiming that the term “Islamophobia” was designed to “promote criticism of Islam to the gallery of special offenses associated with racism.” In popular culture, an early anthem for the Iraq war came from country musician Clint Black, who sang in “I Raq and I Roll” that “our troops take out the garbage for the good old USA.” Franklin Graham, who swore George W. Bush into office at his first inauguration, denounced Islam as “a very evil and wicked religion” in the wake of the September 11 attacks.

That approach lives on today, and there are many reasons to believe that racial animus underpins the right’s imperialist designs. Bolton, who has openly advocated for war with Iran, also chairs the Gatestone Institute, which falsely claims that Muslims have established “no-go” zones into which non-Muslims cannot enter. Just a few years after maintaining that “Iran Will Cheat on the Nuclear Deal,” National Review  is now calling for Trump to do it himself, and unilaterally pull out of the deal. As it happens, National Review is also a frequent promoter of anti-Muslim writing, hyping imaginary “no-go zones,” warning of “sharia supremacism,” and questioning whether religious liberty should even apply to Muslims.

While these pundits and politicians might claim that perpetuating racial hierarchies has nothing to do with their hawkish views, our research disputes this. A new Data For Progress working paper explores how racial attitudes affect attitudes about when our country should send troops abroad. To explore these attitudes, the paper uses an acceptance-of-racism scale, which measures how much a respondent agrees or disagrees with statements like “white people in the United States have certain advantages” and that “racial problems in the United States are rare, isolated situations.”

We find that race, gender, and racial attitudes are, in many cases, significantly associated with endorsing different justifications for the use of military force. But acceptance of racism is often the most powerful predictor of foreign-policy attitudes. It’s important to highlight the importance of this finding, given how rarely the dehumanization of people of color is discussed when the United States goes to war.

To understand how racial animus affects views on war, imagine a hypothetical individual who scores a zero on the acceptance-of-racism scale and is average across all other variables (such as age and education). This individual would be most likely to endorse using US troops to aid our allies and least likely to endorse using US troops to ensure the supply of oil or spread democracy. 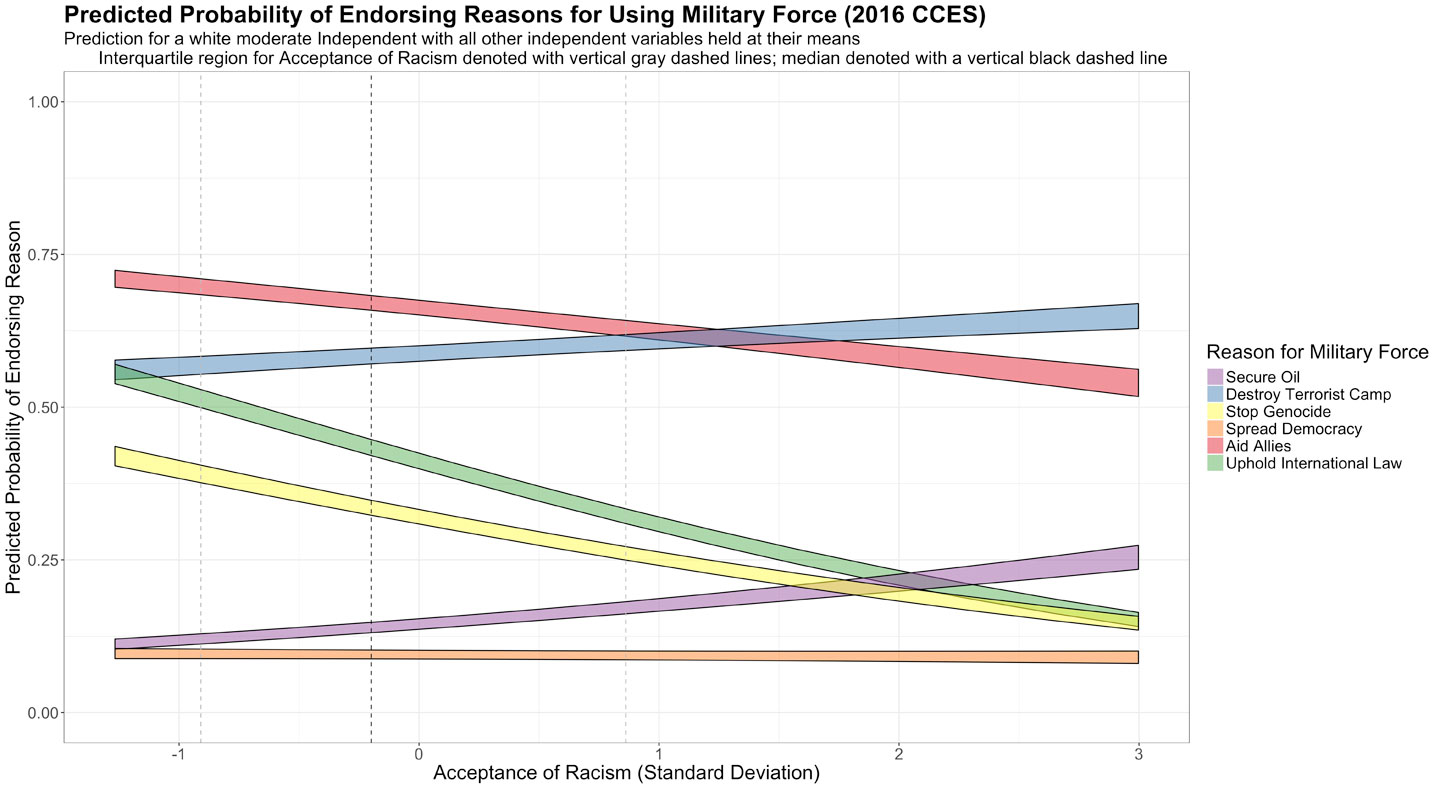 We can explore how these findings relate to the Trump administration’s increasingly aggressive and dangerous positioning toward Iran. Using the American National Election Studies 2012 survey, we examine three major questions that related to the way Trump might approach Iran: bombing Iran, invading Iran, and diplomacy with Iran.

To begin, we should note that diplomacy had the overwhelming support of the American public at the time: 71 percent favored diplomatic talks, while only 8 percent opposed. This support was bipartisan: with 69 percent of Republicans and 76 percent of Democrats in support (11 percent and 6 percent opposed, respectively). In contrast, only 31 percent of respondents supported bombing Iran (40 percent opposed) and 19 percent supported invading Iran (52 percent opposed). This is consistent with more recent polling suggesting widespread support for the Iran deal—Americans on the whole are far more war weary than elites.

But who was in the minority that supports bombing Iran? Perhaps unsurprisingly, racist attitudes are strongly associated with that bellicose position. Among those who believed the word “violent” describes Muslims “extremely well,” 46 percent of individuals support bombing Iran and 24 percent oppose. Among those who said “violent” describes Muslims “not at all well,” 21 percent supported bombing and 44 percent opposed.

To test the effect of anti-Muslim animus on support for bombing Iran, we use a feeling thermometer that asked individuals to place their feelings towards Muslims on a scale from zero (“coldest”) to 100 (“warmest”) and the racial-resentment scale, which is a standard measure of racial attitudes in political science. A representative question asks respondents whether they agree that “It’s really a matter of some people not trying hard enough; if blacks would only try harder, they could be just as well off as whites.” 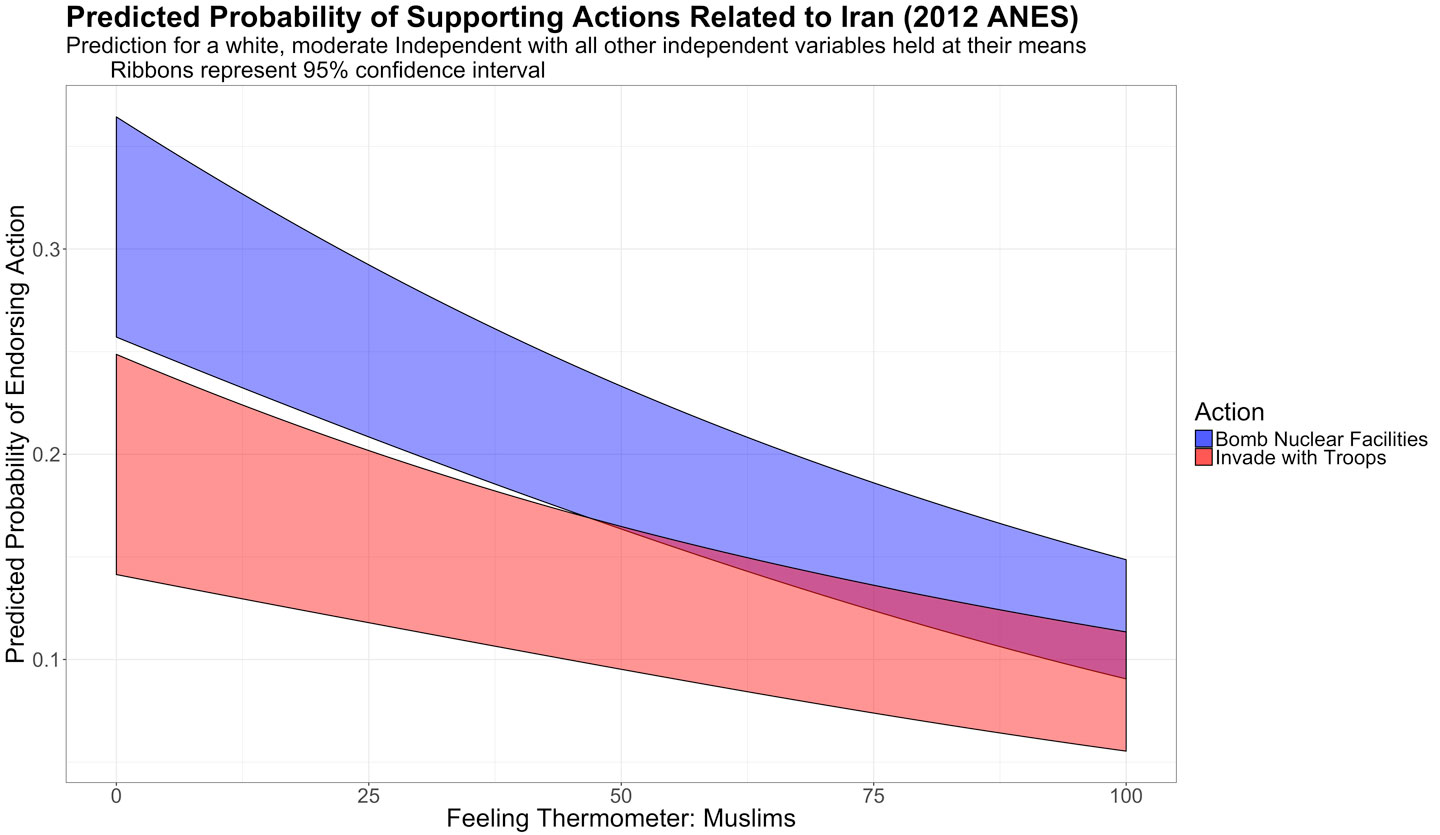 It may seem like a contradiction for Trump to now push for military intervention in Iran, given that he at least motioned toward having a reduced US military presence around the world when he was running for president. But it’s less of a contradiction than most people think. Just look at Trump’s comments about supposed rapist immigrants from Mexico, “shithole” countries, and countless other pronouncements—these made his investment in white supremacy clear, and that attitude helped him get elected. Our evidence suggests that his desire for imperial wars draws support from similar roots. As the United States stumbles towards another war in the Middle East, it’s important to understand how Islamophobia and racism fuel support for such intervention.