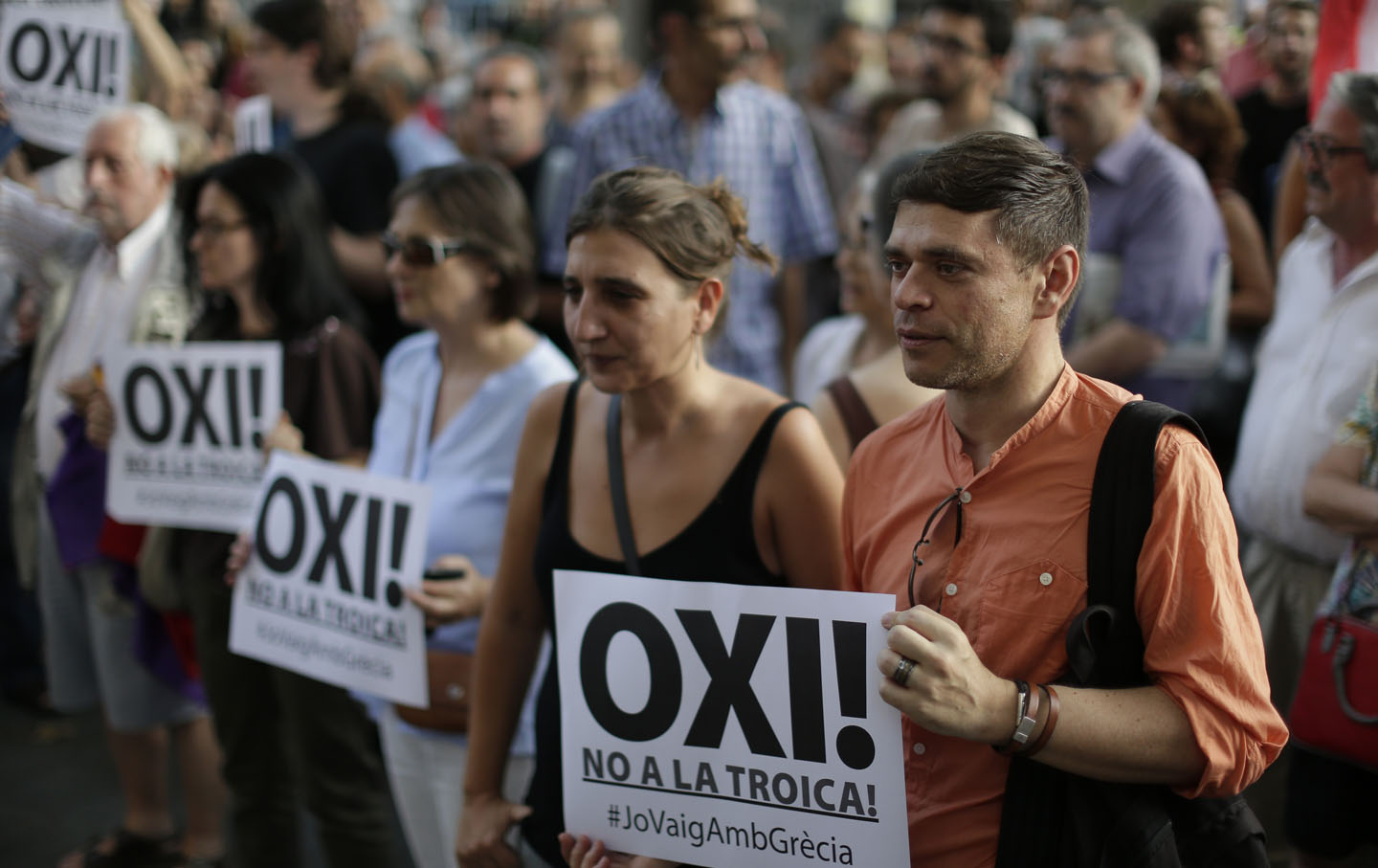 While Greeks’ rejection of austerity in last week’s referendum may not have had the desired effect, that doesn’t mean public opinion in Europe is impotent. To the contrary, both the hardline stance of German Chancellor Angela Merkel and the more accommodating position of French President François Hollande hew closely to their electorates’ beliefs (which those politicians have, in turn, helped to shape), while the leaders of Southern European nations like Spain and Italy have used Greece as a fable for the perils of rejecting austerity, in the hopes of quelling populist movements in their own countries.

To better understand the impact of public opinion on Greek negotiations, we’ve taken a look at some of the most influential countries participating in the ongoing discussions about Greece’s future:

Merkel’s hardline approach to Greek Prime Minister Alexis Tsipras is rivaled only by that of average Germans. In fact, the German public has taken a more severe stance against any form of debt relief for Greece: A poll conducted shortly after the Greek referendum found that 60 percent of Germans supported a Greek exit (“Grexit”) from the euro zone—almost the same percentage as the “no” vote won during the Greek referendum—and 70 percent opposed any further concessions by the European Union.

Merkel's hardline approach to Greek Prime Minister Alexis Tsipras is rivaled only by that of average Germans.

German voters have expressed strong support for their leaders’ performance in negotiations: Two-thirds of voters said they approved of Merkel’s diplomatic efforts, and 70 percent lauded the even more hardline Finance Minister Wolfgang Schäuble, suggesting that German leaders have very little internal pressure to change their tack towards Greece. Of course, the German public might just be echoing the unrelenting anti-Greek messaging they’ve been hearing from their leaders and the press: Schäuble has repeatedly accused Greek leaders of making “false statements,” and Bild, Germany’s best-selling tabloid, greeted news of the latest bailout deal with a banner headline on its website reading, “After all those promises… another 86 BILLION euros for Greece.”

Like their president, the French public is far more conciliatory toward Greece. A poll last week found that only 45 percent of French citizens supported the possibility of a Grexit, even though 85 percent of French don’t expect Greece to ever pay back the 42 billion euros it owes France. In fact, a small plurality of those polled (37 percent) said they supported Greek voters’ decision to vote “no” on the referendum.

A large degree of this support stems from France’s own worries about its economic future in the event of a Greek default or Grexit: French unemployment levels have hit record highs in recent months, and there are fears that a Grexit could trigger a “domino effect” that would damage France’s own fragile economy. That’s not to say the French are totally on Greece’s side though—62 percent of French oppose any form of debt relief for Greece, and more French (42 percent) say they have faith in Merkel to resolve the crisis than in Hollande (24 percent).

Public opinion data from the other countries of Southern Europe is hard to come by, but not from lack of concern. The leaders of similarly debt-ridden Spain, Portugal, and Italy have caught themselves in a double bind, torn between trying to get as much distance as possible from comparisons to Greece and simultaneously relying on the specter of Greece to fend off challenges from anti-austerity movements in their own countries. Italian Prime Minister Matteo Renzi has used the Greek crisis to paint a picture of a more mature, fiscally responsible Italy, telling an Italian reporter on July 1, “In the past, our place was among the troublemakers, whereas now it is among those trying to solve the problems.” Under his government, Italy has pushed through deep cuts to its pension system and liberalized its labor market in order to appease its own creditors, contributing to sky-high levels of youth unemployment and stagnant economic growth.

Southern European leaders rely on the specter of Greece to fend off anti-austerity movements in their own countries.

Meanwhile, in Spain and Portugal, where center-right governments face strong opposition from anti-austerity parties in upcoming elections, right-wing politicians have attempted to tar left-wing opponents with Syriza’s struggles. As Bécquer Seguín and Sebastiaan Faber reported Tuesday for The Nation, Spanish Prime Minister Mariano Rajoy has steadfastly opposed concessions towards Greece and repeatedly compared Podemos, Spain’s insurgent anti-austerity party, to Syriza, while also declaring, “What’s happening in Greece won’t happen in Spain because this is a serious country.” In contrast, Podemos leader Pablo Iglesias has expressed solidarity with Greece, joining in the Twitter hashtag #ThisIsACoup to protest the troika’s bailout proposal. And three months ahead of his own election contest, Portuguese Prime Minister Pedro Passos Coelho has also invoked Greece to defend his own austerity measures, saying on Portuguese television, “It’s in the hands of the Portuguese to make [Coehlo’s economic reforms] a lasting change or risk another path.”