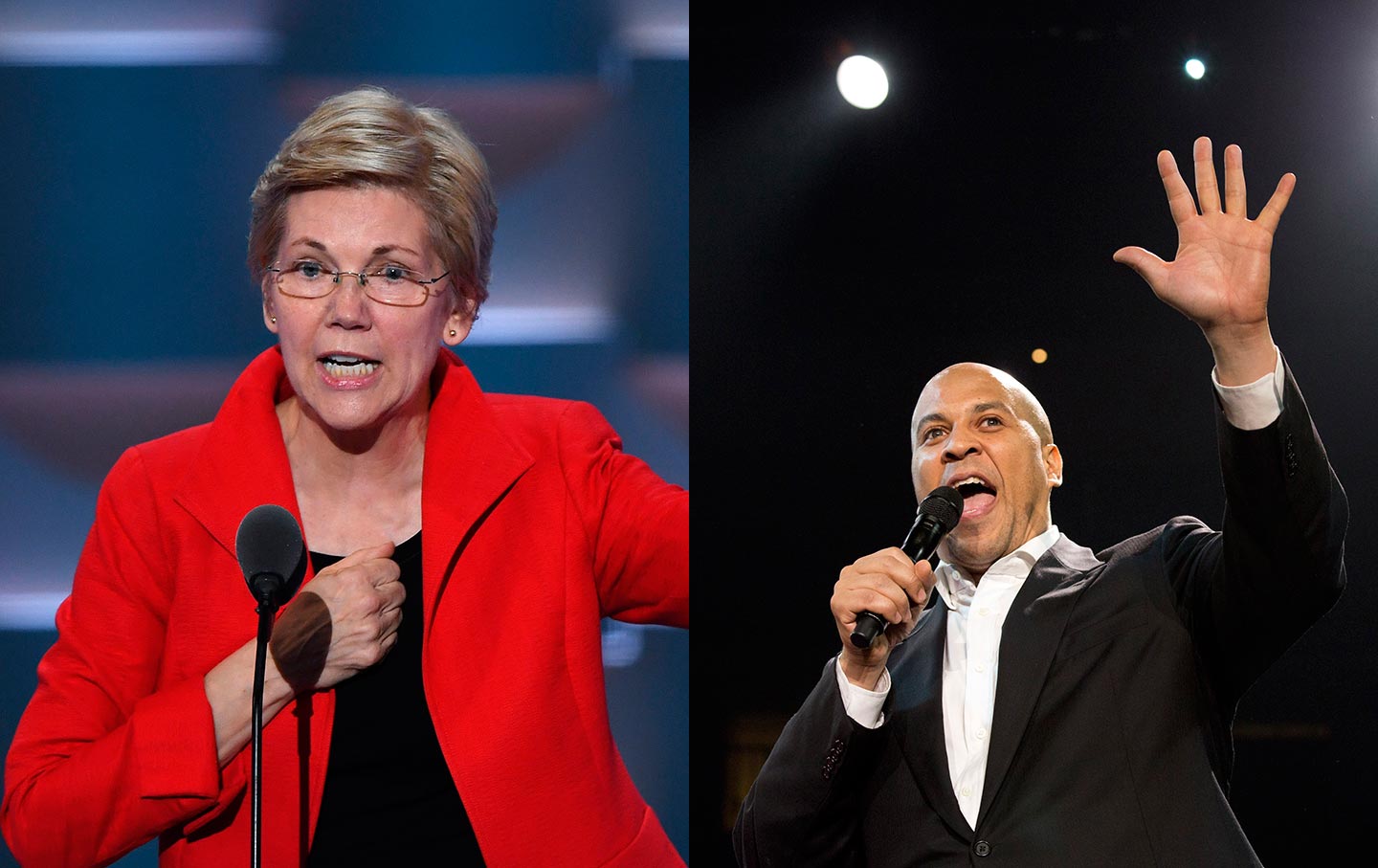 The Center for American Progress, the Democratic establishment’s premier think tank, gathered luminaries and potential 2020 candidates this week for what it billed as an “ideas conference.” Their goal was to focus “not what could have been,” as CAP Vice President Winnie Stachelberg said, but on “new, fresh, bold, provocative ideas that can move us forward.”

In the basement of Georgetown’s Four Seasons Hotel, the posh watering hole for Washington lobbyists, lawyers, and visiting wealth, the conference was at turns a debate about the future, and a demonstration of the difficulty in talking about a positive agenda when Trump looms over everything.

Virtually every speaker dutifully invoked the theme of the day: Resistance is not enough; Democrats must propose what they are for. Each then proceeded to rail at one Trump folly or another, and called on progressives to join in defending what was achieved over the last eight years.

There was a vigorous competition on who had the best Trump putdown. Instead of the sign on Harry Truman’s desk that read “The buck stops here,” Senator Cory Booker offered, Trump’s should read “The ruble stops here.”

“Do you get the feeling that if Bernie Madoff weren’t in prison,” Elizabeth Warren said, “he’d be in charge of the SEC right now?” Representative Maxine Waters topped them all by calling for Trump’s impeachment: “We don’t have to think impeachment is out of our reach,” she said.

The first sessions of the day on the economy revealed that Bernie Sanders’s agenda is gaining ground among mainstream Democrats. Los Angeles Mayor Eric Garcetti described his success in passing a $15 minimum wage, a large infrastructure program, and tuition-free community college. Senator Jeff Merkley, the sole senator to support Sanders in 2016, indicted the trade and tax policies that give companies incentives to move jobs abroad, and called for major investments in infrastructure, renewable energy, and education. Medicare for All still appeared to be off the table, however, with most speakers focused on defending Obamacare against the Republican assault.

Senator Elizabeth Warren used her presentation to present a broader argument for Democrats. She argued that concentrated money and concentrated power were “corrupting our democracy,” and noted that “Trump did not invent these problems.” On concentrated money, she argued not simply for overturning Citizens United and moving to publicly financed elections but also for taking on the revolving door between Wall Street and giant companies and government, the “bought and paid for policy experts,” and the armies of lobbyists that distort our politics. She also argued for “picking up the anti-trust stick” to break up monopolies and the big banks, and revive competitive markets.

Investor and environmentalist Tom Steyer, one of the Democrats’ billionaire benefactors, provided a clear agenda for addressing catastrophic climate change, as well as savvy advice on the coalition needed to bring reform about. Since Republicans are hopeless and business won’t lead, Steyer called for building a coalition around a green-jobs agenda that offers jobs that pay a decent wage, reaching out to labor, people of color, and businesses that will gain in the transition in a bold plan to rebuild the country.

The foreign-policy discussion, in contrast, was virtually bereft of new ideas or serious analysis. The United States is mired in wars without end and without victory. Its war on terror has succeeded in spreading violence and minting terrorists. Its “humanitarian intervention” in Libya has produced a failed state. Its globalization strategy has been devastating to America’s working class. We’re facing rising tensions with both Russia and China. Both parties are pushing for spending more on the Pentagon, which already consumes 40 percent of global military spending. The clear and present danger of climate change doesn’t get suitable action, but we can commit $1 trillion to a new generation of nuclear weapons.

Surely progressives ought to be at least considering a fundamental reassessment. Instead, Susan Rice, Obama’s former national security advisor, offered platitudes. She called for the US to sustain its “mantle of global leadership.” Instead of Trump’s vow to bomb the (bleep) out of ISIS, we should “use our full arsenal.” She called for a “balanced” approach, including strong defense (able to respond to “any threat at a moment’s notice”), skillful diplomacy, smart development and domestic strength.

On the foreign-policy panel, Senator Chris Murphy, who is seen as a leader of progressive foreign-policy thinking, criticized Trump’s “foreign policy by improvisation” and delivered a strong defense of diplomacy and the State Department. Bizarrely, with the US headed into its sixteenth year of war in Afghanistan, the only mention of the debacle came tangentially from Representative Adam Schiff, who invoked disgraced former General David Petraeus on the importance of US aid in building a competent government in Afghanistan. Apparently pouring over $100 billion in that feckless effort is not yet enough.

The national press treated the event as an early audition of potential 2020 presidential contenders. Senators Kirstin Gillibrand laid out her national paid family leave plan. Senator Kamala Harris took apart Attorney General Jeff Session’s revival of the failed war on drugs. Virginia Governor McAuliffe warned about gerrymandering and the importance of winning gubernatorial races before the 2020 census and state-level redistricting. But Senator Merkley and Representative Keith Ellison, the only Sanders supporters present, were placed on panels, and Sanders wasn’t even invited.

The most interesting contrast was between Warren and Senator Cory Booker, who were both given star turns. Warren was full of fire and brimstone, while using her speech to put forth a clear analysis and reform agenda that pushed the limits of the Democratic debate. Booker closed the conference with a passionate address, invoking the progressive movements that have transformed America, concluding that Democrats can’t merely be the “party of resistance,” but must “reaffirm” America’s “impossible dream.” It was a speech brutal on Trump, replete with good values, sound goals and uplifting oratory, and unfortunately devoid of concrete ideas.