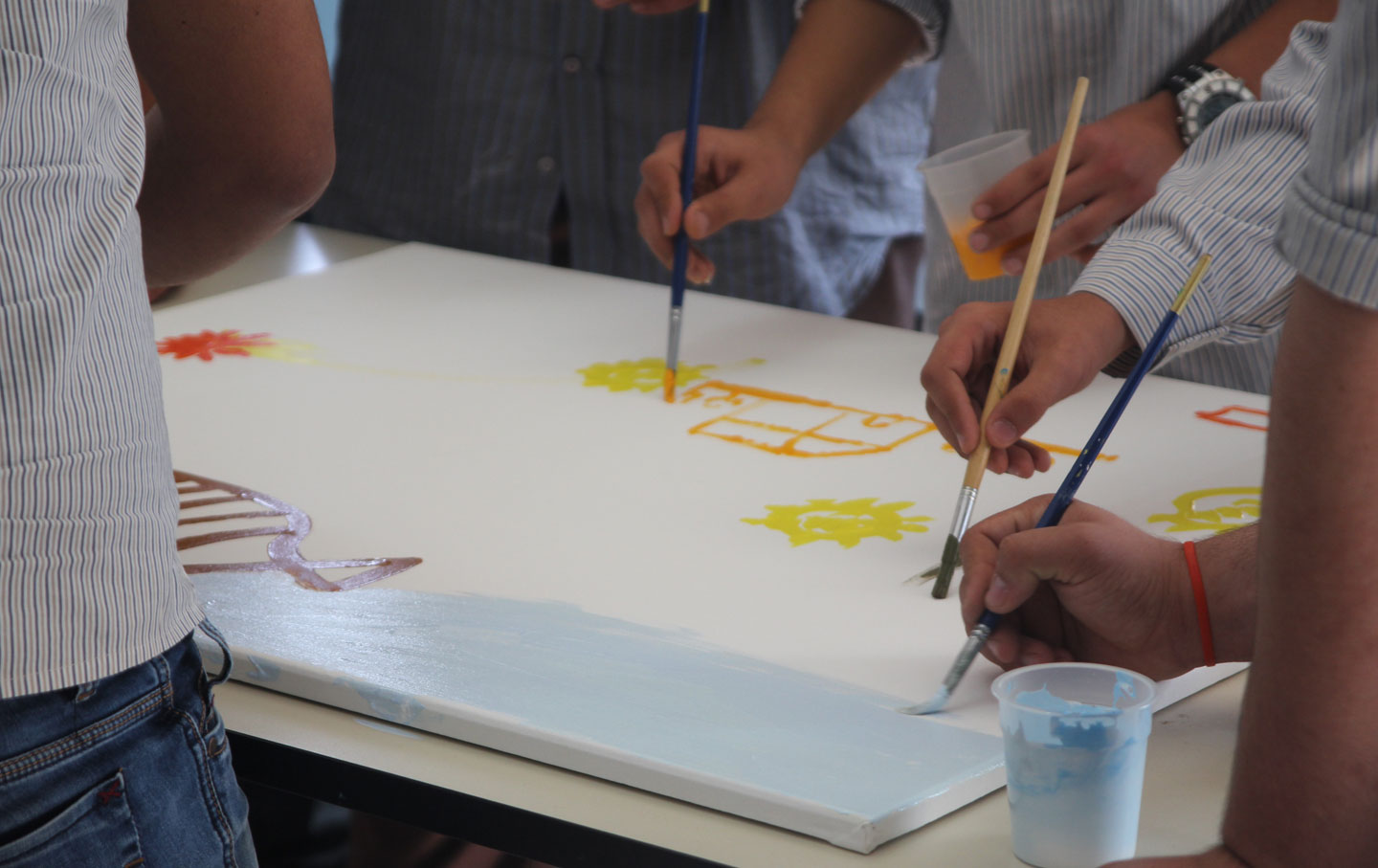 BARJA, LEBANON–Anita Toutikian stands alone in a bare-bones classroom, huddled over a table covered in art supplies. She carefully arranges paint bottles and brushes, and sets out a sleeve of plastic cups for pallets.

In a few minutes, 22 students, five of whom are Syrian refugees, will burst into this room for a two-hour art therapy session. Toutikian, a working artist and a clinical psychologist, is there to help alleviate tensions between the refugees and their Lebanese classmates. According to the UN, at least 1.3 million Syrians refugees are currently living in Lebanon, which has led to a crisis-level strain on resources that impacts virtually every facet of society – and education is no different. This is the second time Toutikian has come to the Barja Technical School, a secondary school in this costal town 30 minutes south of Beirut. The first time the students all drew a figure – a firefighter, to be specific – individually. But today the students will be painting in groups.

Barja Technical School is one of the hundreds of schools in Lebanon that are struggling to accommodate the nationwide surge of Syrian children into the Lebanese school system, which the UN has called “under served prior to the Syria crisis.” As a result, Syrian children all over Lebanon are facing a crippling lack of access to education. A recent UN report found that only 22 percent of school-age children are receiving a formal education. “The Syrian influx has increased the demand on the limited public school places by almost 134 per cent,” according to the report. “There’s an education crisis,” in Lebanon, says Amnesty International’s Lama Fakih. And that current crisis could result in a heightened susceptibility to recruitment to violent groups. “When you talk about a person’s ability to care for himself and his family and have a fulfilling life, obviously the opportunities are very limited without an elementary education,” adds Fakih.

Even those who are enrolled in school face significant barriers. Lebanese classes are often taught in either French or English, which most Syrians don’t speak. That’s an issue at the school in Barja. “This is one of the challenges, but teachers who teach languages are helping with this, are working with Syrians,” says Haifa Abu Hader, who works for the school. “It’s not easy. They’re very brave,” he says, referring to the harassment Syrians often encounter in schools across Lebanon. Prejudice against Syrian children and even some teachers is a growing concern for the U.N. Refugee Agency. “Syrian girls and boys face blatant discrimination, bullying and violence,” the agency noted in a recent report. “Violence against boys can be serious—in Mount Lebanon a 13-year-old was hospitalized after being beaten up outside his school.”

At Barja Techincal School, many of the refugee students initially fled Syria to the northern Lebanese city Arsal. Regular cross-border fighting between the Lebanese army and jihadi groups, including ISIS, then pushed those families deeper into Lebanon. Between the trauma of the war and the continuing struggles that come from a precarious living situation, many students aren’t receiving the support they need. The U.N. estimates that there are 95,000 Syrian children in Lebanon who have been traumatized by the conflict, which has diminished their learning abilities. “There is a lot of pressure on Syrian children in schools,” says Chantal Chedid, prevention coordinator at Skoun, a Lebanese NGO that works with adult drug users as well as young people through their early intervention program. Though Skoun – who organized the session I’m observing – doesn’t see some of the worst manifestations of trauma, school administrators say many of the Syrian students struggle with a variety of issues related to fleeing the war. “We see dropouts of Syrians, many are feeling sad, or depressed,” says Chedid. She adds that other common symptoms are “insomnia, [and] trouble concentrating.” An estimated 20 percent of Syrian refugee children in Lebanon dropout of school.

After the 22 students file in, Chedid breaks them into three groups of seven or eight, and each group crowds around a canvas roughly three feet by four feet. For the next hour, the students paint brightly colored landscapes full of sailboats, cars, and trees. “We are not teaching art here, and we are not doing full therapy. It is a psychosocial support with art, therapeutic art, we can say, because we are not addressing the problem of each child,” says Toutikian. “We are offering them the opportunity to express themselves freely, without judgment, without evaluation of their work.”

“In this work, we are not exploring the trauma,” she adds. “We are working in a group setting, and in a group setting it is not easy to address individual traumatic experience. We are giving them the opportunity to release the trauma.” One can’t help but wonder what some of the young adults who have fled the war might paint given a darker palette, but that answer isn’t for today. “When they’re happy, they all become children,” says Toutikian.

Observing the group, which is assembled from several different classes, there’s no question they are enjoying themselves. How well does it work to combat bullying? “Usually when someone from outside the school comes to the school, the students are commenting, ridiculing them, etc,” says Hader, the school employee, through a translator. “We didn’t see this today.” “We are offering them the opportunity to express themselves freely, without judgment, without evaluation of their work, says Toutikian. (John Knefel)

I take out my camera to take close ups of the paintings, which initially doesn’t elicit much of a response. “It’s good, right?” says one girl. But when I take out my phone to snap a few more, the kids immediately strike poses. “Selfie!” yells one of the boys. Many of the students speak English very well, but even those who don’t know the word “selfie.” I pose with several of the students for a shot, not realizing that I’ve now opened the door for a new distraction – a picture with a native English-speaking interloper – that virtually every one of their classmates finds irresistible. By the end of the hour I’ve snapped over a dozen selfies with a rotating cast of characters, and, inexplicably, signed the tops of several students’ outstretched hands.

One of the students, who I’ll give the pseudonym Ali because he’s a minor, is excited to practice his English on me. “My favorite subject is electricity,” he says, and explains that he works at his father’s shop repairing washing machines. Does he like painting? “I like it, but this is kid stuff for my friend,” he jokes, bopping a boy lightly on the back of the head.

As the students file out, and return to their regular schedule, several complain and plead for Toutikian not to leave. After a few more requests for selfies all but a few students have cleared the room. One boy extends his hand to me, like many of the others, excited to practice his English. “I love you,” he says, as we shake hands goodbye. Then adds: “Nice to meet you,” and walks out the door.