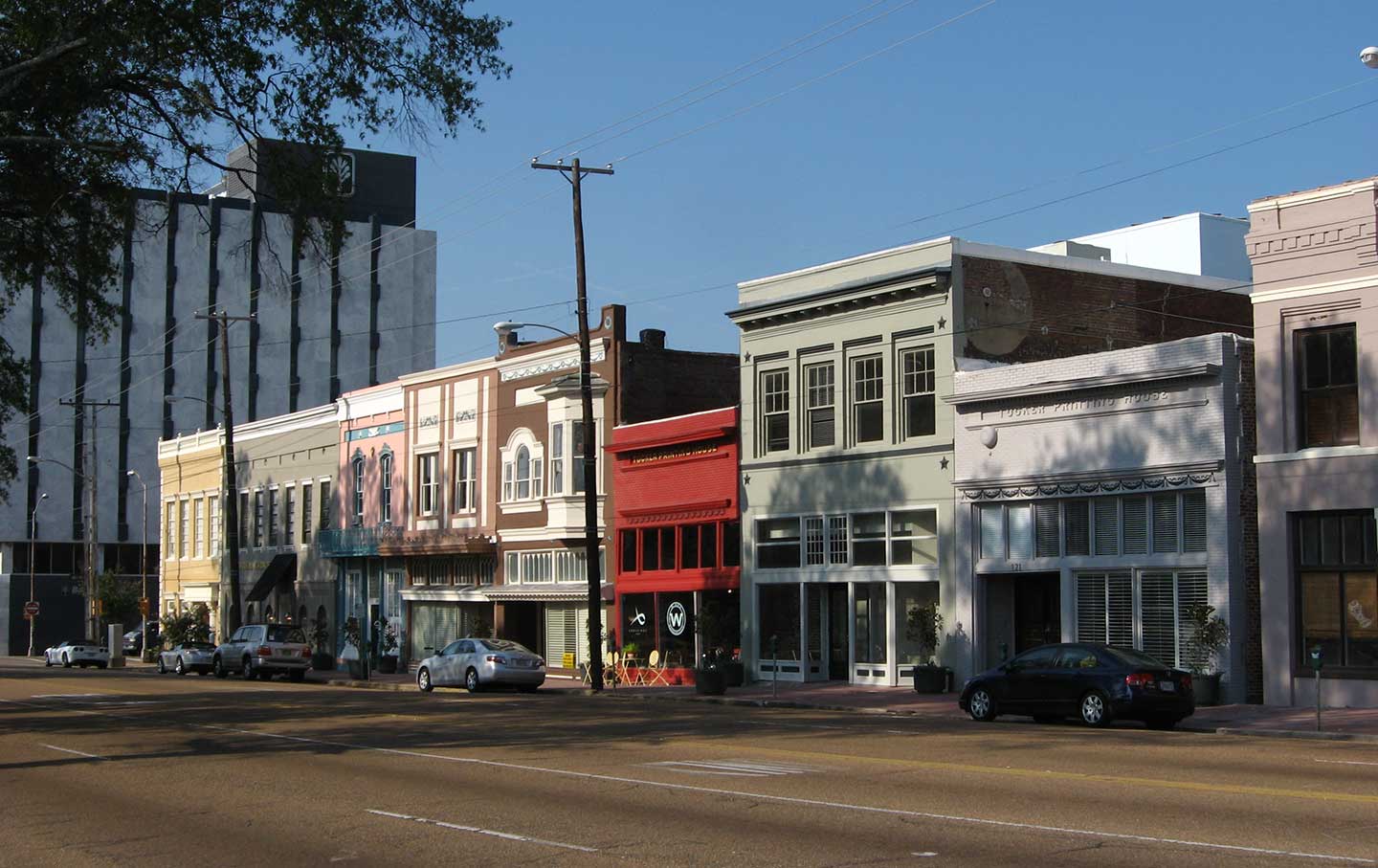 Obama praised the idea. Reporter Annie Lowrey and Facebook co-founder Chris Hughes recently published books about it. The city of Chicago is exploring it. And the town of Stockton, California, has begun a pilot project experimenting with it. But Mississippi is arguably one of the last places you’d expect to find an effort to provide people in poverty with a guaranteed basic income. Yet, in December, 16 mothers in public housing in Jackson will begin to receive $1,000 per month for a year, no strings attached.

The new guaranteed-income initiative, the Magnolia Mothers Trust, targets an African-American community with an average annual income of $11,300. The project emerged out of Jackson native Aisha Nyandoro’s work running Springboard to Opportunities, a nonprofit serving residents in federally subsidized affordable-housing communities in Mississippi, Alabama, Maryland, and the District of Columbia. Frustrated with the stubbornness of intergenerational poverty in these housing complexes, Nyandoro turned to the families living there to gather information about their experiences and needs.

This Week in Poverty: The Invisibles in Mississippi and the US

The women Nyandoro spoke with consistently articulated that inadequate access to cash was a serious impediment. Without cash, “There is no breathing room. There is a constant idea that at any moment something could go wrong and knock you back—not just for that moment, but for six months or a year,” said Nyandoro. That led her and her colleagues to ask a simple question: “What if the mothers had the resources they need to breathe and think about the future and plan?” Nyandoro secured funding for the pilot from individual donors as well as the Economic Security Project, which supports initiatives that explore access to unconditional cash. In November, there will be a lottery to select the participants.

Without cash, “There is no breathing room. There is a constant idea that at any moment something could go wrong and knock you back—not just for that moment, but for six months or a year.”

One of Nyandoro’s hypotheses is that a guaranteed, unconditional income will serve like a release valve to the constant pressures of poverty, freeing bandwidth women can use to strengthen the prospects for both their families and their communities—to work towards their own dreams and goals, and to engage and lead in their communities. Society, Nyandoro said, greatly underestimates the strengths, skills, and leadership qualities of these women.

“I see on a daily basis how they work to keep their dignity in a system and country where they are not being dignified,” said Nyandoro. “To advocate for their kids in failing school systems…for themselves in a failing economic workforce system. And somehow they still manage to show up with humor and grace and joy.”

The idea of giving poor women cash without telling them how to use it is a direct refutation of the punitive approach to antipoverty policy that has been ascendant in America since the Reagan years. As it happens, Mississippi was ground zero for that kind of approach: Before President Bill Clinton signed the Personal Responsibility and Work Opportunity Reconciliation Act (PRWORA) of 1996, which caused the number of poor families receiving cash assistance in the United States to plummet, there was a pilot program in Mississippi that was a harbinger of things to come.

Mississippi Governor Kirk Fordice’s “Work First” program, which began in 1995, forced primarily African-American mothers to leave literacy programs, GED classes, and two-year associate-degree programs in order to work as security guards, shrimp pickers, fast-food workers, in poultry plants or at other low-wage jobs—often without childcare or reliable transportation—if they wanted to receive meager, but needed, cash assistance. Many women were forced out of whatever promising futures they were working towards and required to accept dead-end jobs offered by the state.

The policy reinforced the popular narrative that people in poverty—especially black women—were poor because of laziness or a lack of gumption. It also conveniently provided an ample source of cheap and monitored labor. In a 1996 report, graduate students at the University of Southern Mississippi’s School of Social Work who had tracked the Work First program concluded that the state’s punitive approach continued “to blame women on welfare for imagined deficiencies,” and that policy-makers should focus on “increasing wages, providing quality childcare, and investing in training and education [for] low-income women.”

Instead, Clinton and the Gingrich Congress followed Mississippi’s lead and passed PRWORA. That year, 68 of every 100 families with children in poverty were able to receive cash assistance, called Temporary Assistance to Needy Families (TANF); in 2016 the number was down to 23 of every 100. Because there are few federal standards for how the program should be administered, cash-assistance is now virtually nonexistent in many states. Mississippi, for example, provided TANF to fewer than seven of every 100 families with children in poverty in 2016—and six states helped an even lower percentage of poor families. The maximum benefit in Mississippi is $170 per month for a family of three, or less than $2 per person per day, the lowest in the country. In September, Census data revealed that 27 percent of children in Mississippi were in poverty in 2017, third-worst in the nation, including more than 31 percent of African-American children. Even with such widespread poverty the state approved only 1.4 percent of TANF applicants in 2016.

Gutting TANF has left many low-income mothers with little access to cash. While women represent half of the state’s workforce they are also two-thirds of its minimum-wage workers; any breadwinner earning Mississippi’s minimum wage of $7.25 an hour will likely not be able to rise out of poverty. Even if a person were able to get SNAP to help with food, or housing assistance to help make rent, or even CHIP or Medicaid, they will still be cash poor, struggling to purchase items like diapers, over-the-counter medications, hygienic products, and other household goods. Moreover, the state only serves about 10 percent of the children who qualify for childcare assistance, and childcare can cost as much as college tuition.

Even if a person is able to get food stamps or housing assistance, they will still be cash poor, struggling to purchase items like diapers and over-the-counter medications.

When Nyandoro describes the effects of being cash poor, one gets a sense of a pressure cooker with no relief. Without cash or a savings account, what would otherwise be a minor inconvenience can be crippling. Nyandoro recounted the story of a mother whose car transmission recently died, a $1,500 repair that she can’t afford. The woman is now bartering to get rides to her job, her children to extracurricular activities, and to the grocery store. She is trying to hold on until next tax season when she will receive her Earned Income Tax Credit that will supplement her low-wage earnings. Other people can be set back by something as little as a flat tire—a common occurrence in Jackson, where the streets are riddled with potholes.

Nyandoro’s belief in the potential of low-income women was shaped by her grandmother, the civil-rights icon LC Dorsey. Dorsey grew up a sharecropper, dropped out of high school, and married and had six kids before age 25; later she earned a GED and a masters in social work from Stony Brook University in New York before returning to the Mississippi Delta where she helped start the first federally funded rural health clinic in the United States. She also led boycotts and fights for Head Start, for job opportunities for youth and adults through community action agencies, and for prison reform at the Parchman state penitentiary. “I grew up sitting at her feet,” said Nyandoro. “Everything I know about social justice and working in community I learned firsthand from her and my mother and maternal aunts—hearing them talk, listening, and going to community meetings.”

The motto for Nyandoro’s organization—“radically resident-driven”—grew out of her grandmother’s approach to partnering with the community in order to determine the necessary work. Following that model, women in the four housing projects that Springboard serves in Jackson helped to design the Magnolia Mother’s Trust. During the year, women participating in the program will have the option for financial coaching, leadership training, monthly meetings with their peers, and counseling with a social worker for trauma and any other issues they want to discuss. The women will also lead a service project in the community, something they insisted on in order to not be viewed as “taking without giving back.” Importantly, there will be no “interventions” for how the women choose to spend their money.

“We need to get to the place where we trust poor people,” Nyandoro said. “They are all mothers who want the best for their kids, and they know what that looks like.” She challenges the notion that society can determine what is “wasteful” or “non-essential” spending. Take the use of money to get one’s nails done, which might be considered trivial: “Those two hours might be the only two hours when they are not raising their kids during the course of that month. It’s self-care.”

“We need to get to the place where we trust poor people. They are all mothers who want the best for their kids, and they know what that looks like.”

Over the course of the year, the Magnolia Mothers Trust will collect quantitative data such as spending patterns, ability to accomplish one’s goals, and frequency of community engagement. But it’s the qualitative data—the stories about how the women’s lives change—that could help undo the damaging narrative about people in poverty that is currently being reinforced as the Trump administration and other conservative politicians put a new emphasis on work requirements, drug testing, and race baiting. Nyandoro knows the women enrolled in the pilot may face obstacles—for example, the participants will lose some public benefits as a result of the additional income—but she believes that a clearer picture of poverty in America and the ability of people to change their conditions will emerge.

“I want folks to understand what it means to live in poverty as an African-American mother in this country, and that we begin to see that it’s the system that is the boogey man—because that’s what’s really wrong in this country,” she said.