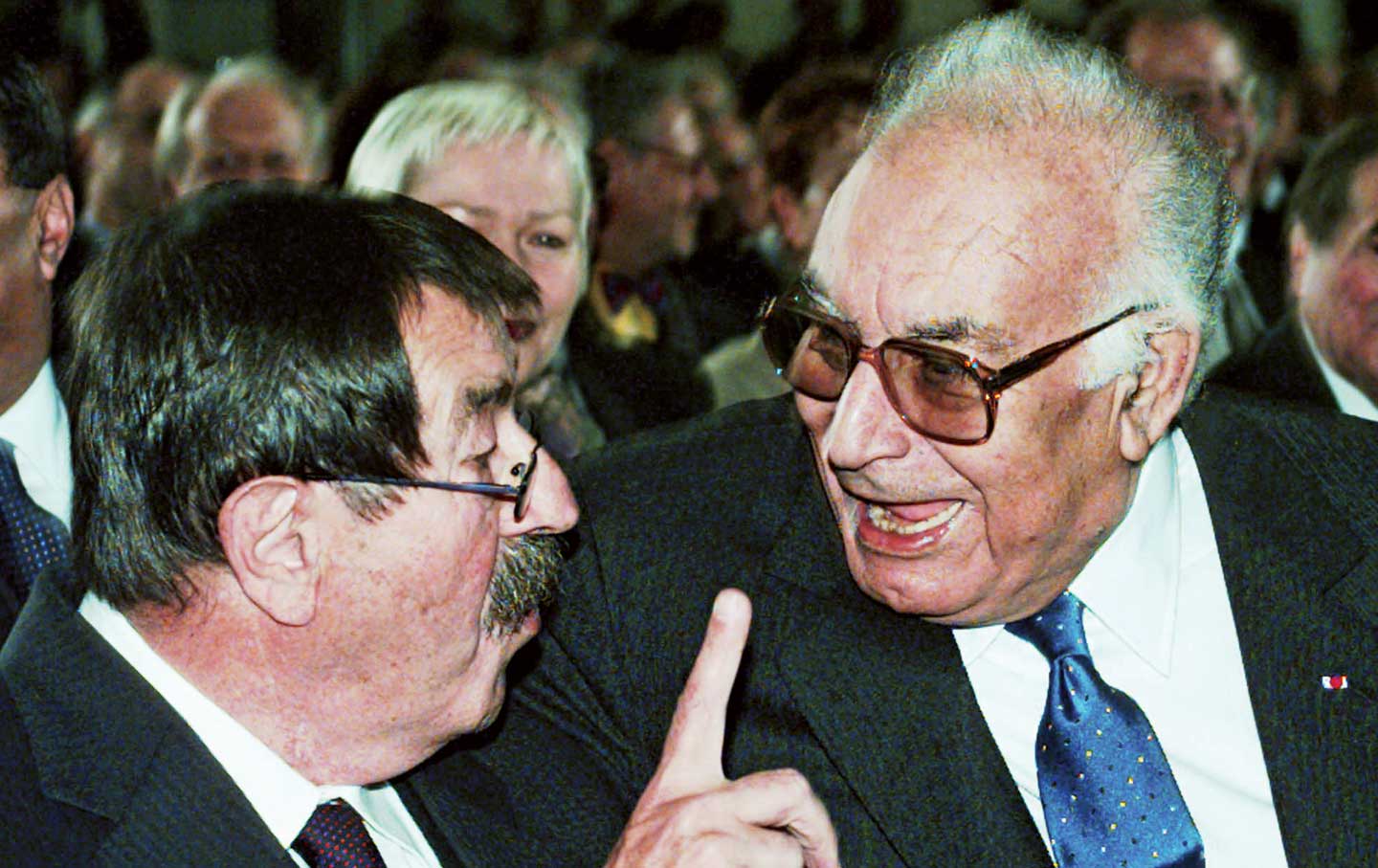 He had credited many writers with influencing his work: Stendhal, Cervantes, Chekhov, and Faulkner, among others. But in the 2005 introduction to his best-known novel, Memed, My Hawk, first published in 1955, Turkey’s greatest storyteller, Yaşar Kemal, who died on February 28, at age 92, admitted to having another master: Charlie Chaplin.

Kemal was the underdog’s writer. It was the dirt-poor villagers squeezed dry by the great agas, the agas exploited by the corrupt landowners, and the outlaws of the Taurus Mountains, forced down to the plains, resettled, and brought to heel by the state, whom he cast as his heroes. Modernity, in its relentless sweep, tried to fling them aside. Through Kemal, they held fast and fought back.

Kemal came from a family of Kurdish origin, though he never played up the fact, even when in 1995 he penned a breathless, scathing essay for the UK-based Index on Censorship denouncing Turkey’s policies toward its Kurds. “Turkey is disappearing in flames along with its forests, anonymous acts of genocide, and 2.5 million people exiled from their homes, their villages burnt, in desperate poverty, hungry and naked, forced to take to the road,” he wrote, describing the army’s scorched-earth tactics in the country’s southeast, “and no one raises a finger.” The words earned him a 20-month suspended jail sentence on charges of inciting hatred and separatism. “You are not convicting me. I am convicting you!” he reportedly yelled at the judge during his sentencing.

His main allegiance was not to any country or nation, but to a land. “There’s been a debate if he was more Kurdish or Turkish,” Kaya Genç, a young writer, told me at an Istanbul cafe run by one of Kemal’s old friends, the octogenarian photographer Ara Güler. “But maybe the best way to describe him is as Anatolian.” In geographical terms, Anatolia is that part of Turkey that lies to the east of Istanbul, the part that the poet Nâzım Hikmet once compared to the head of a horse galloping from far-off Asia into the Mediterranean. In Kemal’s world, it is Turkey’s soul.

Kemal was likely born in 1923—the year that modern, republican Turkey, the sole surviving rump of the Ottoman Empire, came into existence—in a poor village on the banks of the Ceyhan River near the plains of Çukurova. When he was almost 5, he saw his father stabbed to death in a mosque. In an interview, he recalled hearing him sing. He went to school, dropped out, and worked a couple of odd jobs; but he also wandered the nearby hills, picking up legends, poems, sayings, and jokes from the local villagers and the roving bandits, part of a tradition of oral literature left behind by Anatolia’s itinerant bards, mystics, and Kurdish epic singers (or dengbêj). “Banditry,” Kemal would later write, “enhanced my life.”

In his late teens, he moved to Istanbul, where he would find work as a journalist and eventually get married and settle down. But Anatolia followed him everywhere. “No writer can be a great novelist without his own Çukurova,” he once said.

One day in 1960, Kemal was riding a packed Istanbul city bus headed to Levent, a neighborhood in the north of town. At Taksim, the modern city center, four men got on. “You could tell by the way they were dressed they were villagers. They were young. Their eyes were green,” Kemal would write in Cumhuriyet, a Turkish newspaper. “And their shoes were covered in mud.”

From the back of the bus came a loud snarl. “Is that how Istanbul used to be?” a well-dressed, stylishly mustachioed man said, to no one and everyone at once. “You all know. People who dressed like that, they’d never board a bus at Taksim Square, they’d never even approach Taksim.”

As the man went on, winding himself up, complaining about the smell, the unseemly way country folk walked, and the damage that hundreds of thousands of recently arrived migrants had inflicted on his beloved, proud city, the other passengers’ heads began to bob in approval. The four young men, trying to make themselves disappear, huddled in a corner. One of them finally found the courage to confront the man in the back. Kemal stepped in before they could come to blows.

When the four men got off, Kemal did too and struck up a conversation with them. The result was a newspaper dispatch, one of his most prized, about a community of brickmakers; the toxic, fire-breathing kiln where they worked; the parched skin on their faces; their huge, blistered, disfigured hands; the villages they had come from; their first days in the city, hungry and homeless; the girls they had wanted to marry—assuming they’d ever save up enough cash—and their longing for home. It was just over 1,100 words long.

Many of Kemal’s contemporaries would have probably sided with the mustachioed gentleman at the back of the bus. “In the classic Turkish novel The Strange, an intellectual goes to a village and ends up hating all Turkish people because they’re all unenlightened, they all have beards, and they can’t speak any French,” recalls Genç. Even if the founder of modern Turkey and its first president, Kemal Atatürk, exhorted his citizens to see the peasant as the country’s “true master,” the plea often fell on deaf ears. In the early years of the republic, the average member of the Istanbul elite resented the villager as a wart on the face of a Westernizing, secular Turkey, as the hay clinging to its polished shoes. Kemal embraced him.

He did so without condescension. Throughout the 1950s, many of his peers, Turkey’s socialist realists, penned novels praising the state for bringing literacy and industry to the countryside. Kemal, though a committed leftist, never used his characters for political ends. “With him, you never got a sense of patronizing; there was no attempt at using people for the sake of a project,” says Genç.

What Kemal did write about was man’s struggle—against injustice, nature, and man. In Teneke (1955), it was the farmers who epitomized it, as they descended solemnly on the house of the newly appointed governor, their clothes caked in mud, after the rice planters flooded their village. In The Undying Grass (1968), it was the cotton pickers plagued by their blood feuds, the heat of the plains, and their overlords, comforted only by their saints and their myths. In Memed, My Hawk, it was a peasant boy who took to the hills, and to banditry, to fight a brutal landowner, avenge his mother, and save his beloved.

Kemal was far from the first modern novelist to write about Anatolia, but he was the first to give it a real voice. From the rich, mysterious, and violent world of his childhood, he brought with him to Istanbul a new language, hitherto unknown in Turkish literature, dense with local expressions and words. It was a language understandable to most Turks, but unusual enough to prompt Ali Püsküllüoğlu, a poet, to publish A Yaşar Kemal Dictionary (1974) of sayings, curses, proverbs, and spells.

Memed, Kemal’s first book, was a phenomenon from day one. “Kemal had taken the tradition of folk literature and converted it into the contemporary novel,” says Semih Gümüş, a writer and book critic. “It was a miracle.” The novel has since sold more than 1.2 million copies, a record in Turkey. Nobel laureate Orhan Pamuk might be the country’s most-talked-about author. Kemal remains its most loved.

If the language Kemal created remains alive after 60 years, it is because he never ceased speaking it fluently. “In all his 20-plus novels, his language has not significantly changed since Memed, My Hawk,” Gümüş says. “His life’s work,” he adds, “was one continuous book.”

Latife Tekin, like Kemal, was born into poverty and village life. By the time she began working on her first book, in the early 1980s, he was a giant among Turkish novelists. “I used to see him as something of an obstacle,” Tekin recalls. “‘With him around,’ I would start thinking, ‘how can you distinguish yourself—how can you write, where do you start?’” It was Kemal’s writing that helped her come up with the answer. Through his voice, Tekin says, she found hers: “I decided that I would write in my own language, the language I’d heard around me at home, that I’d write the truth.” She made her debut in 1983 with Dear Shameless Death, a magical-realist novel based on her childhood in Anatolia and Istanbul—a childhood, much like Kemal’s, abounding in folk stories and strange, unfathomable customs, populated by dreams, legends, and jinns. The book was to earn her a reputation as one of Turkey’s finest living authors. “We are all indebted to him,” she says of Kemal. “He inspired every Turkish writer who came after him.”

Kemal once told an interviewer that there were only two things he believed in, both of them “endlessly powerful, endlessly creative, endlessly changing.” The first was nature. In Turkish literature, Gümüş observes, nature tended to play a supporting role: “Our people’s relationship with [it] is not particularly strong. Our past is rooted in nomadism; nature was never a big part of our literary vocabulary. But Kemal’s descriptions of it were so rich and detailed, so real, it was something unprecedented in Turkish literature.”

Those descriptions were at times lengthy, but like his writing in general, rarely superfluous. If the plains and the hills and the woodlands could speak, he was there to interpret their words. “You had this feeling that he really knew what an Anatolian forest smelled like, how an animal moved in it, and what a character might feel inside it,” Genç says.

Nature, for Kemal, was much more than a bystander in the drama of human existence. “Deyirmenoluk village is surrounded by a plain of thistles. There are no fields, no vineyards, no gardens. Only thistles,” he wrote, setting the scene for his most famous novel. “One grows up, develops, matures according to one’s soil. Memed grew on barren soil.”

The only other thing Kemal believed in, he said, was people. In Teneke, a less-known book, he offered them some parting advice: “Struggle,” he wrote, speaking through the book’s hero, the wrath of the greedy rice planters bearing down on him. ”Until the end.”