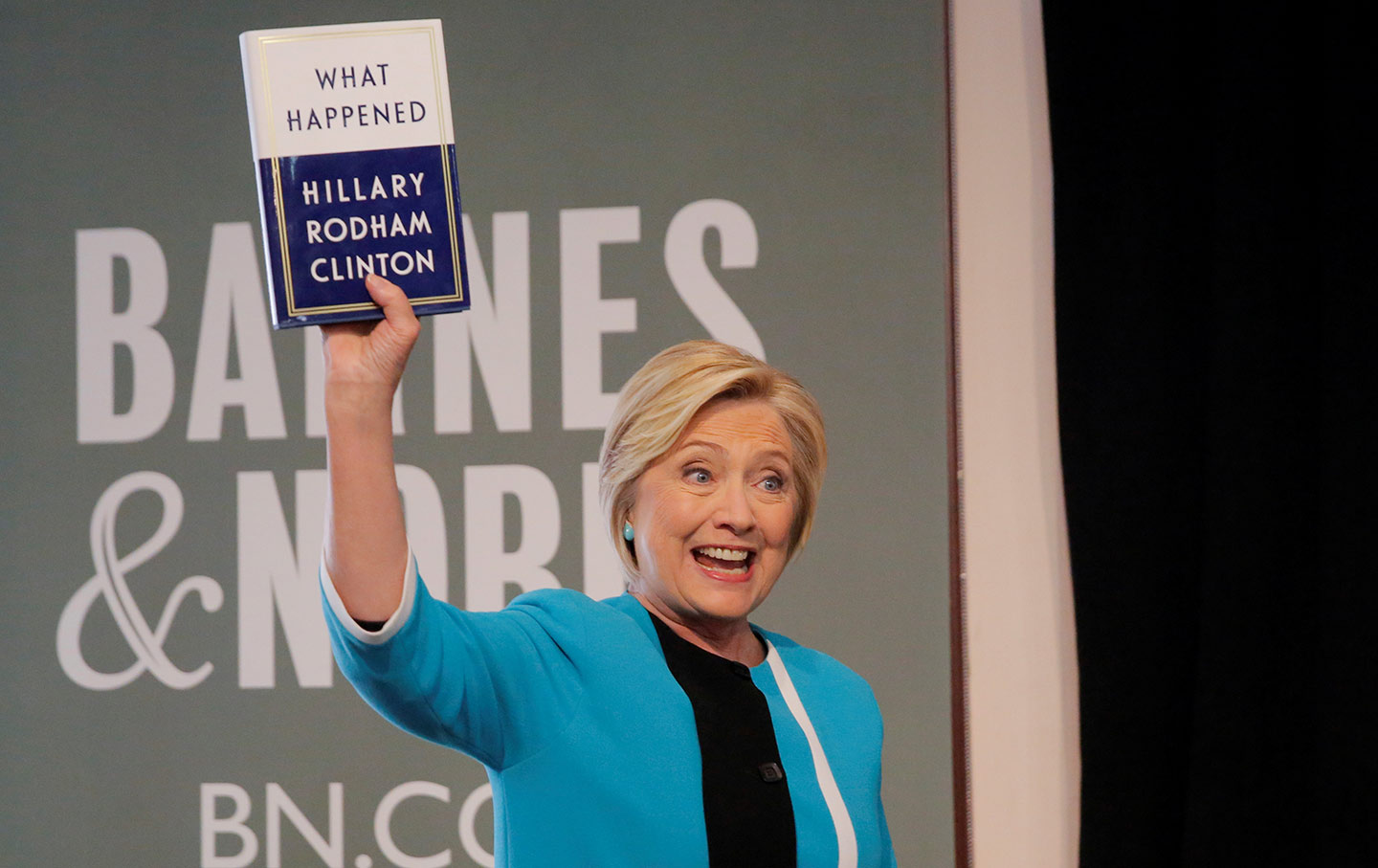 Hillary Clinton arrives for a signing of her new book, What Happened, in New York City, September 12, 2017. (Reuters / Andrew Kelly)

Hillary Clinton’s book-length reflection on the 2016 presidential race, What Happened, struggles to answer the haunting question of how a highly experienced candidate with a massive political machine lost to Donald Trump and his vile clown campaign. The book is less interesting when it talks about the campaign, and much more so when Clinton is assessing the future.

Clinton accepts responsibility for her loss, and allows that she might have “missed a lot of chances.” Most of the book, however, is about casting blame and settling scores: Putin did it, Comey did it, and so did Bernie, the media, Fox News, sexism, Clinton fatigue, Electoral College, partisan loyalty, voter suppression, and many other factors. With Trump losing the popular vote and drawing an political inside straight to win three critical states by 77,000 total votes, thus winning the Electoral College, any of these plausibly might have made the difference. But as Hillary admits, none helps explain how the contest with Trump’s bizarre candidacy was close in the first place.

Many chapters have a title describing a human trait or state of being: “Perseverance” and “Resilience” and “Frustration.” Missing is the trait that most bedeviled Clinton: credibility.

Clinton acknowledges the criticism that she didn’t have an economic message, but claims she talked about the economy in every speech. Her problem, however, was that many voters wouldn’t believe a word she said.

Part of this stems from her own admitted inadequacies as a candidate. Her “message”—poll-driven and focus-grouped to death—lacked authenticity. The book is full of 20/20 hindsight concerning what she woulda, shoulda, coulda done or said but didn’t. She wrote that she constantly suppressed her own instincts because of focus-group findings or staff cautions. Most revealing was the scene her publisher released as part of promo for the book: the debate where Trump acted like a “creep” stalking her across the stage. It was “one of those moments,” she wrote, “where you wish you could hit pause and ask everyone watching, ‘Well, what would you do?’ Do you stay calm or turn as say ‘Back up you creep.’”

Hit pause and poll the audience? Why not just react humanly? She was too disciplined, packaged, and cautious for that. Much to Hillary’s frustration, this contributed to the absurdity that, as Allen and Parnes put it in Shattered, Inside Hillary Clinton’s Doomed Campaign, their own reported version of last year’s campaign, “[Trump] could be genuine while lying; she came across as inauthentic even when she was telling the truth.”

Of far greater importance is the credibility problem that establishment Democrats suffer generally. Clinton’s loss can be treated as idiosyncratic, but under Obama Democrats lost over 1,000 state legislative seats and control of both the House and the Senate. Putin, Comey, and Bernie didn’t do that. Hillary isn’t to blame for that.

Voters have, sensibly, grown skeptical of politicians. They believe that elected officials are bought and sold and that they tell voters what they want to hear but act as their donors and powerful interests demand. After two “recoveries” that did not lift most Americans, many were looking for someone to shake things up.

For Hillary, this deep-rooted credibility problem was far more debilitating than the effects of aggressive Republican attacks. She had been on the political scene for 25 years, and a central player in two Democratic administrations. She was the candidate of the Democratic establishment, and presented herself as an experienced and practical politician “seeking to build on eight years of progress.”

As a result, she couldn’t escape “being pigeonholed as the candidate of continuity rather than change.” She attributed this to people’s widespread anger. She writes that “her instinctive response” when she meets people who are “frustrated and angry” is to talk about how we can fix things. “But in 2016 a lot of people didn’t really want to hear about plans and policies. They wanted a candidate to be as angry as they were, and they wanted someone to blame.”

But voters are looking for more than someone to blame. They want to know if a candidate sees them, understands their struggles, and is prepared to call out and take on those who rigged the rules against them. Detailed policy promises—think-tanked, poll-driven—don’t mean anything, unless the candidate can be believed.

Given Hillary’s history, overcoming their skepticism was virtually impossible. Trump made trade—and the shipping of good jobs abroad—a centerpiece of his appeal. Bill Clinton campaigned against NAFTA, but pushed to pass it in office and went on to pass most-favored-nation treatment of China and the World Trade Organization. Barack Obama claimed to be against those deals, but reverted to peddling more corporate trade deals, including the Trans-Pacific Partnership, right in the middle of the campaign. Hillary claimed to be against the TPP, but had celebrated it as the “gold standard” while secretary of state. Even if she were serious about getting tough on trade, who could believe her?

Trump railed against Wall Street, Goldman Sachs, and corrupt politicians. Hillary claimed she had a strong agenda for reforming Wall Street. But Bill Clinton had championed the disastrous deregulation of Wall Street. Obama had continued Bush’s policy of bailing out the big banks, while not prosecuting the banksters for what the FBI called an epidemic of fraud that led to the financial collapse. Hillary not only pocketed big bucks from speeches to Goldman Sachs and others; she also opposed Elizabeth Warren’s call for a new Glass-Steagall act and Sanders’s call to break up the big banks. Her insistence that she had a better plan to reform Wall Street fell on deaf ears.

Throughout the Midwest, communities were devastated from plant closures and job flight. Hillary promised a plan to get them back to work. But neither her husband nor Obama had done much for these communities. Voters had every reason to be skeptical.

Trump didn’t have any plans to speak of. But he was willing to savage his own party’s support for corporate trade deals. He mocked Hillary and his Republican opponents as corrupt politicians who didn’t have a clue. He promised that he would bring back jobs, take on China, and revive coal. He bragged about funding his own campaign. And he was just enough of an outsider that people believed he might actually try to shake things up.

For Hillary, voter skepticism was deepened by the heavy millstone of Clinton fatigue. This is less about the unending Clinton scandals—some invented, some self- inflicted—than it is about Clinton’s achievements. Hillary defends her husband’s presidency from the charge that it was about “small-bore initiatives such as midnight basketball and school uniforms,” and argues that “Bill’s impact on our party and our country was profound and transformative.”

But what kind of transformation? Clinton’s New Democrats came to office tacking to conservative winds. Twenty-five years later, many of his reforms and compromises turned out to be destructive: His embrace of harsh sentencing led directly to grotesque mass incarceration, particularly of young black men; his welfare “reform” ended with impoverished mothers with children getting less aid in the Great Recession; his deregulation of Wall Street opened the doors of the casino that blew up the economy; his embrace of austerity furthered a disastrous decline in basic public investment; his celebration of the United States as an indispensable nation and extension of NATO led to wars without end, and Hillary’s own Libyan misadventure; his tax and corporate policies contributed to our extreme inequality.

Hillary complains that she “never managed to convince some skeptics that I really was in it to help working families,” or to overcome the “false perception that I was a defender of the status quo.” To do that, however, would require far more than a file cabinet packed with earnest reform ideas. It would require, at the very least, a forceful analysis of how the economy got rigged against working people, who did it, and what she would do to take them on. That would require repudiating, in fact if not in name, much of her husband’s legacy.

Clinton’s claim to pro-worker populism was directly challenged during the Democratic primary. Clinton is bitter and churlish towards Sanders throughout the book. She clearly thinks it presumptuous that Sanders—not even a Democrat—would challenge her so fiercely in the primary. She argues he didn’t get in “to make sure a Democrat won the White House, he got in to disrupt the Democratic Party.” She accuses him of reacting to her proposals by promising bigger, bolder, and impossible ideas. She implies that he doesn’t believe we “should fight both for more equal economic opportunities and greater social justice.” In interviews promoting the book, she’s been even harsher, telling NPR that Sanders “didn’t support Democrats. He’s not supporting Democrats now.”

This is remarkably disingenuous. For someone who didn’t set out to win the Democratic nomination, Sanders came pretty damn close. He chose to run in the Democratic primaries rather than as a third-party candidate precisely to avoid the Nader problem. The notion that his agenda was a reaction to hers is risible: Sanders has been championing these ideas for years. The claim that Sanders is not “supporting Democrats” is preposterous. He endorsed and stumped for her. The most popular politician in the country, he’s been tireless endorsing and supporting progressive Democratic candidates across the country since the election.

Sanders-inspired activists are pushing to take over party structures from the local to the national level. They are recruiting and supporting insurgent candidates. Sanders is championing a bold agenda—most recently single-payer health insurance—that is gaining ever-greater traction inside the Democratic Party. While Clinton published this book about the last election, Sanders published Our Revolution, a guide to the future agenda, and introduced his “Medicare for All” bill.

Ironically, Clinton acknowledges the force of Bernie’s position when she looks to the future. “He was right that Democrats needed to strengthen our focus on working families,” she writes, adding that “Bernie deserves credit for understanding the political power of big bold ideas. “His call for single-payer health care, free college and aggressive Wall St reform inspired millions of Americans, especially young people.”

Clinton admits she’s come to a “new appreciation for the galvanizing power of big simple ideas” and she admits that “Universal programs are even more appealing that we previously thought.”

“Democrats should redouble our efforts to develop bold, creative ideas that offer broad-based benefits for the whole country,” Clinton writes. “We should be unafraid to kick the tires on transformative ideas.”

That’s good advice. If only she had embraced it as a presidential candidate.