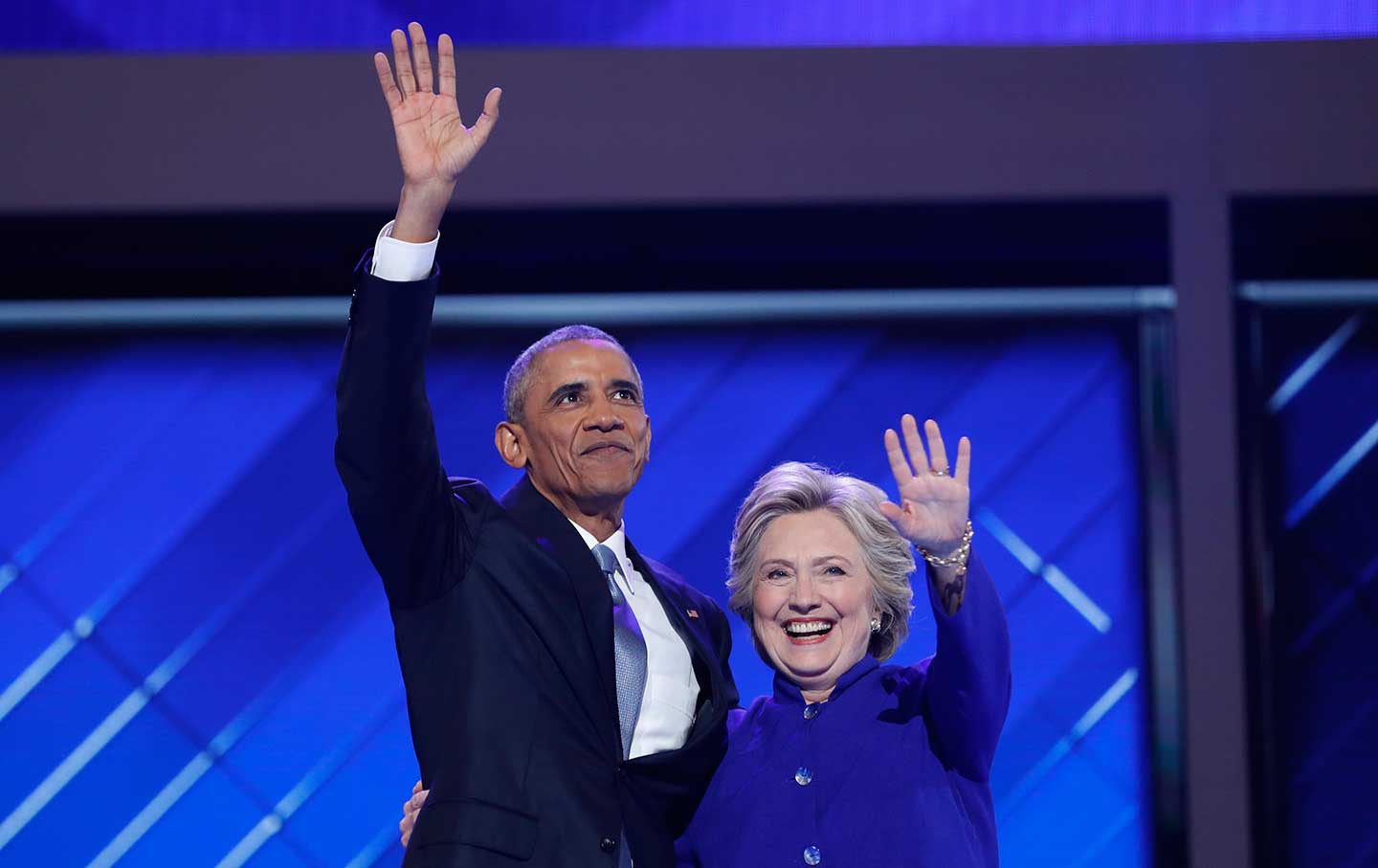 Barack Obama and Hillary Clinton appear onstage together after his speech on the third night of the Democratic National Convention in Philadelphia. (Reuters / Mark Kauzlarich)

Philadelphia—The last two nights of the Democratic Convention featured a political spectacle the nation has never seen: one powerful man after another wielding his powers on behalf of the first woman to be nominated by a major party for president of the United States. As Donald Trump urges Vladimir Putin to hack and distribute Hillary Clinton’s erased State Department e-mails, and ugly GOP crowds continue chanting, “Lock her up,” loyal men have come to her defense, not as though she were a damsel in distress but rather a female superhero colleague targeted by a particularly cruel and repellent villain.

Bill Clinton led the male testimonials on Tuesday night, ably gender-bending to pull off the traditional duty of first spouse. He gave voters an intimate glimpse of the would-be president’s achievements, competence, and decency. But since his wife has been effectively neutered by 25 years as a strong and much-attacked woman in politics, he also had to introduce her as lovable, telling us about the “girl” he fell in love with. Some journalists didn’t like the fact that he approached his task that way, talking about her thick blond hair and her long white skirt, but it worked. I, for one, enjoyed hearing about the time our next president’s water broke, a moment at the start of labor no mother ever forgets, but no other president has had occasion to remember.

Hands down, though, it was President Obama who did the best job of vouching for the readiness of his former rival to take his job, eight years after she tried for it and lost. “There has never been a man or a woman—not me, not Bill,” he said flatly, “more qualified than Hillary Clinton to serve as president of the United States.” Up in his box, Bill smiled and nodded in agreement.

Obama also seemed to be testifying to the basic decency and competence of the country and its voters, trying to make us realize we’re not the kind of electorate that would choose Trump over Clinton. After a long meditation on the values of love, honor, and hard work that his parents imparted to him, as Michelle Obama’s parents did to her (I was waiting for him to add “and as Melania Trump’s did to her,” but he’s not an asshole), he insisted, “These values haven’t gone anywhere. Still cherished by people of every party, every race, every faith.” He continued, “Fascists or communists or jihadists or homegrown demagogues will always fail in the end. We don’t fear the future, we embrace it.” Of course, the man he derisively referred to as “the Donald” is the “homegrown demagogue” who sows fear of the future. But Obama mostly talked about Trump by talking about Clinton’s very different strengths.

Vice President Joe Biden came out to the Philadelphia-perfect theme of Rocky, and pummeled Trump mercilessly. “His lack of empathy and compassion can be summed up in the phrase he’s proud he made famous—’You’re fired!’ Give me a break. That’s a bunch of malarkey!” Biden testified to Clinton’s character and tenacity, which mattered even more given the shady Maureen Dowd column that talked of his late son, Beau, telling Biden he had to run for president to advance “Biden values”—presumably superior to Clinton values. There has been tension between the two powerful Democrats over the years, especially after Biden felt squeezed to make a decision about whether he would challenge Clinton for the presidency. There was no trace of that Wednesday night.

Even former New York mayor Michael Bloomberg came out as a character witness for Clinton, a woman he also thought at least briefly of challenging to succeed Obama. Describing himself as a former Republican turned independent, he admitted that he didn’t agree with Clinton on everything, but he had no doubt that she’d be a far better leader than Trump, making a persuasive case to independents and undecideds.

“Together, let’s elect a sane, competent person,” he declared, to loud cheers from the crowd.

It’s vice-presidential nominee Tim Kaine who will be Clinton’s partner as she faces off against Trump, and he accepted his nomination with a charming, sometimes goofy speech. Along with introducing himself to the country, he took on the job of mocking Trump, doing a kind of unconvincing but still funny imitation of the way Trump punctuates his impossible plans and big lies with the phrase “Believe me!” It was silly, but you can also imagine it getting under Trump’s skin.

There were, of course, women onstage Wednesday night, memorably former congresswoman Gabrielle Giffords, who is still recovering from her 2011 shooting and has been a crucial Clinton partner on gun control. Likewise, Erica Smiegielski, the daughter of the principal killed in the Sandy Hook massacre, gave powerful testimony to Clinton’s leadership on that issue.

The president had a big finish, exhorting the crowd to “do for Hillary what you did for me. I’m ready to pass the baton. Summon what is best in us to elect Hillary Clinton. Show the world we still believe the promise of this great nation.”

As the crowd roared and waved signs saying “Thank you,” Clinton came out from backstage to Obama’s 2008 campaign song, Stevie Wonder’s “Signed, Sealed, Delivered.” They hugged a long time. Obama had indeed done what he could to sign, seal, and deliver the case for Clinton to the nation, and to turn over his coalition to his former rival and would-be successor.

Donald Trump’s campaign released a statement chiding the Democrats and the Clinton campaign. “Instead of dealing with reality, they spoke in cheap, petty terms beneath the dignity of a convention,” the statement read. Having covered the hellscape in Cleveland last week where Clinton was called “Lucifer” and Obama a Muslim, where delegates wore shirts reading “Trump that bitch,” it was funny to hear Trump to talk about “the dignity of a convention.”