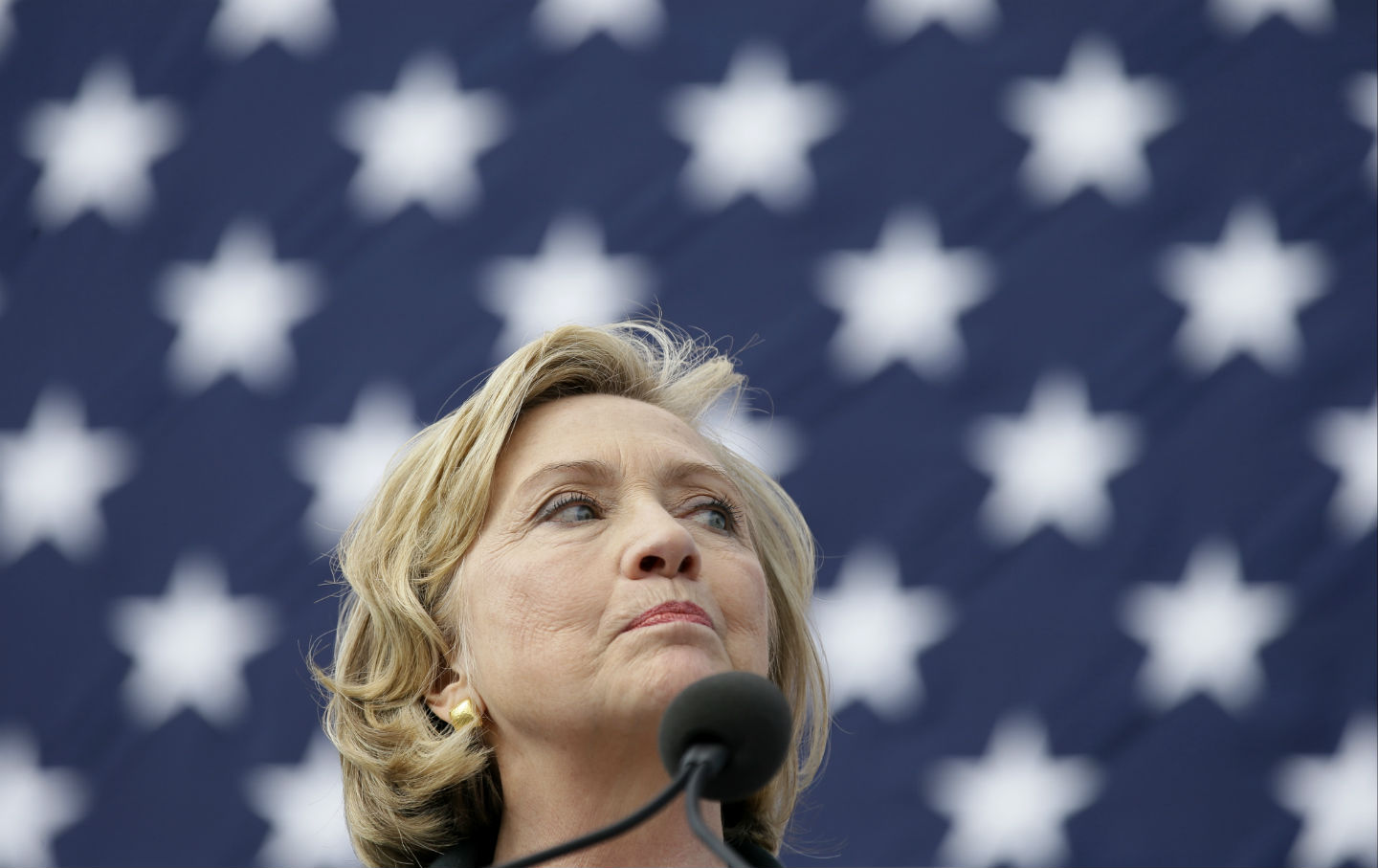 It has long been a truism of American politics that electoral success is impossible without genuflecting to the founders and the flag. This is always absurd, not to mention frequently ahistorical, as when Thomas Jefferson, who prescribed a revolution every 20 years or so, is toasted as the paragon of stable conservatism. In recent years, however, the tendency has reached new heights of idiocy. When he announced his campaign for the presidency last year, self-described “constitutional conservative” Ted Cruz compared himself to Patrick Henry, the Virginia revolutionist who fiercely opposed the Constitution in the debate over its ratification. “I have the highest veneration of those Gentlemen,” Henry said of the propertied elite who took it upon themselves to write a new, more creditor-friendly Constitution. “But…what right had they to say, We, the People?”

It is refreshing, then, that a candidate for the highest office in the land appears to possess an at least slightly nuanced understanding of the American founding and all its annoying complexity—including the class struggle that contemporaneous participants and observers understood to be at the core of the intense battle over it. The argument that American politics is and ought to be fundamentally anti-democratic appears to be the latest pin with which Hillary Clinton is trying to pierce the Bernie Sanders balloon.

In an interview last week with MSNBC’s Chris Matthews, who alley-ooped the former secretary of state by saying of Sanders, “You can call for a revolution but it ain’t gonna happen,” Clinton responded:

Our system is set up to make it difficult. Checks and balances. Separation of powers. Our Founders knew, if we were going to survive as the great democracy that they were creating, we had to have a system that kept the passions at bay. We had to have people who were willing to roll up their sleeves and compromise. We couldn’t have ideologues who were just hurling their rhetoric back and forth. We had to actually produce results. That hasn’t changed since George Washington.

First, let’s dispense with the contradiction at the core of this argument. Very simply, and incontrovertibly: The founders did not intend to create a “great democracy.” They were terrified of democracy, and of the people. That’s why they secretly gathered in Philadelphia in the first place: bands of angry and indebted Revolutionary War veterans were marching around the countryside in Massachusetts and elsewhere, threatening to shut down courts and to take over military arsenals if the state governments didn’t stop burdening them with oppressive taxes to pay off the wealthy bondholders who had snatched up promissory notes given to soldiers at the end of the war against Britain. Robbed both coming and going—by the weak federal government, who tried to create a new American aristocracy by giving military officers far more lavish pay than their men, and by tax-happy state governments in hock to those nascent aristocrats—the rebels demanded less taxation and more representation. The point of the Constitution was to give them exactly the opposite.

Respectable historians have long known this to be the case, but unlike her comments last month disparaging Reconstruction as regrettably disharmonious—a reading of history associated with resurgent white supremacists in the 20th century and long since debunked, most decisively by Eric Foner—Clinton’s claim that the founders intended to create a “great democracy” was scarcely noticed. By minimizing the accomplishments of the first truly multiracial democracy the world ever saw, the Dunning School did a lot of damage; by expunging class struggle from the origins of the republic, the fairy-tale view of the American founding has arguably done a whole lot more.

Then there’s the part about compromise as the great attribute of American politics. Is Clinton referring to the several 19th-century compromises that preserved slavery? Or does she mean for us to think of Abraham Lincoln’s attempts to bring the South back into the Union by proposing a 13th amendment to the Constitution—not the one ratified in 1865 that banned slavery, but the one in 1861 that would have enshrined it in the Constitution forever? How about the 1877 compromise that granted Rutherford B. Hayes the presidency so long as he pulled troops out of the South, ending Reconstruction? Well, we already know how Clinton feels about that one. It’s unclear who Clinton expects will be persuaded by this argument. The only possible explanation is that Clinton really does believe that these kinds of compromises represent the best of the American political tradition, and that the country ought to elect a president who promises more of the same.

Yet we must give Clinton-as-historian credit where due: There is, indeed, much support for the idea that the founders instituted checks and balances within the federal government not to prevent any one branch from dominating another—the standard grade-school explanation, which is to say, in America, the standard explanation—but rather to keep the passions of the people at bay, and this is why her citation of George Washington is so astute, and so revealing.

At the height of Shays’ Rebellion in Massachusetts, in the fall of 1786, Washington, in retirement at Mount Vernon, received a letter from his former lieutenant, Henry Lee, informing him that some of the rebel leaders “avow[ed] the subversion of [the government] to be their object together with the abolition of debts, the division of property and re-union with G. Britain.” Washington responded with words that one does not often find printed on coins or inscribed on monuments. Lee’s and others’ reports of the situation, Washington said, proved that “mankind left to themselves are unfit for their own government.” Clinton denounces Sanders as the latest in a long line of “ideologues…just hurling their rhetoric back and forth.” Washington, in his letter to Lee, condemned “the interested views of desperate characters.”

“Mankind left to themselves are unfit for their own government.” —George Washington

Those of Clinton’s and Washington’s stature and station will always dismiss advocacy for “the abolition of debts” and a more equitable distribution of property as mere “rhetoric.” The history of the United States is the history of their success. But this year may be different. “Democracy is a fragile organism,” Clinton told Matthews, the thrill, eight years later, now going up the other leg. That is true. It was true in 1786, when the delegates to the Constitutional Convention throttled democracy in the cradle, and it is true today, when a bipartisan political and financial elite, resembling no political force in our history more than the Federalists of the early republic, is terrified that, against all odds, real democracy—rule by and for the people—may be reborn.

Clinton’s passing comment about Reconstruction provoked a stampede of criticism by liberal writers who, thanks in large part to the work of historically literate journalists like Ta-Nehisi Coates and Jamelle Bouie, are increasingly well-versed in the debate over the legacy of the Civil War and Reconstruction. But her comment to Matthews received almost no attention whatsoever, despite the fact that this one actually goes to the core of Clinton’s argument for why she would make a better president than Sanders.

Two hundred and thirty years after the country’s first popular uprising, “desperate characters” are again on the move. As Clinton suggested, our system is “set up to make it difficult” for them. Both Democratic candidates, then, fully acknowledge that the system is rigged. One condemns it; the other proudly defends it. The oldest and most fundamental divide in American politics has returned.