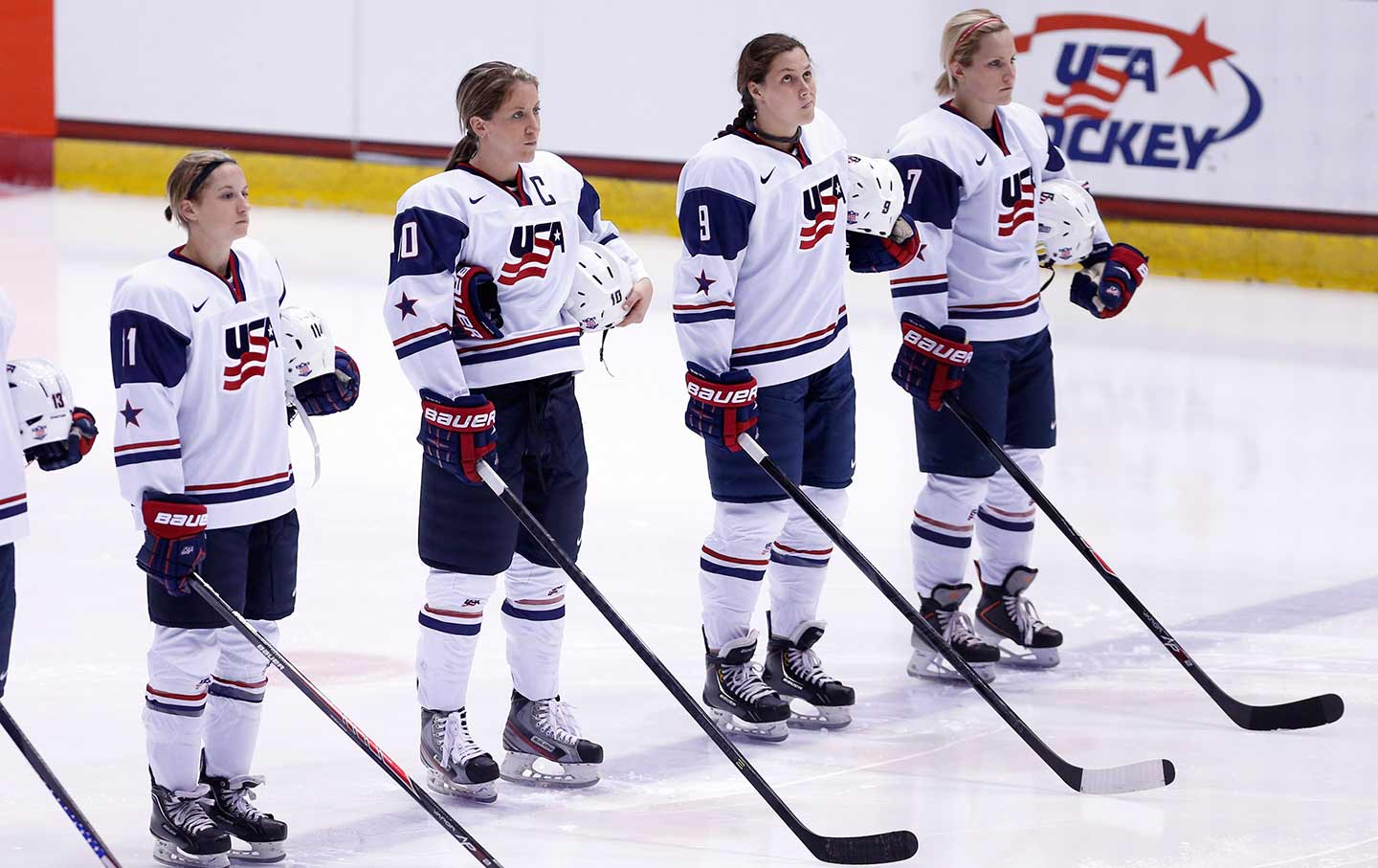 US women’s hockey players prepare for a game against Sweden on November 5, 2013. (AP Photo / Mike Groll)

The disrespect visited upon the US women’s national hockey team has been a cascade of contempt so incessant, it seems designed just to provide writing fodder for Rebecca Solnit. It’s not just the $20,000 in stipend pay for every four years of work. It’s not just the absence of  equitable support for issues as basic as travel accommodations and food. It’s not just the fact that this team has cleared every bar for success, winning silver in the 2010 and 2014 Olympics along with six world championships, and are still treated like an afterthought by USA Hockey.

It’s the insulting slights USA Hockey piles onto the injuries. It’s the fact that when the Olympic uniforms were unveiled before the 2014 Winter Games in Sochi, the men’s team was invited to the press conference and the women learned about the presser on television. It’s the fact that these newly minted jerseys listed the Team USA’s historic honors and left off the storied 1998 gold medal won by these very women. It’s the fact that USA Hockey has a sizable budget to develop youth hockey for boys, and offers only crumbs to aid the growth of girls’ play. After a year of trying to negotiate some kind of terms to remedy these issues, the defending World Champions are taking the only step they have left. They are threatening to strike and sit out the 2017 IIHF Women’s World Championship, taking place at the end of march in Plymouth, Michigan. In a shocking statement, released on the Twitter feeds of team stars Hilary Knight and Amanda Kessel, the players said the following:1

The members of the US Women’s National Hockey team announce that we will not be playing in the 2017 IIHF women’s world championship in Plymouth, Michigan, unless significant progress has been made on the year-long negotiations with USA Hockey over fair wages and equitable support. We have asked USA Hockey for equitable support as required by the Ted Stevens Amateur Sports Act. Specifically, we have asked for equitable support in the areas of financial compensation, Youth team development, equipment, travel expenses, hotel accommodations, meals, staffing, transportation, marketing and publicity. The goals of our requests are to receive fair treatment from USA Hockey, to initiate the appropriate steps to correct the outlined issues, and to move forward with a shared goal of promoting and growing girls and women in our sport while representing the United States and future competitions, including the Women’s World Championship. Putting on the USA jersey represents the culmination of many years of hard work and sacrifice that reflect our love of both hockey and country. In making these request, we are simply asking USA Hockey to comply with the law.2

Captain Meghan Duggan followed that up with a statement that read,3

We are asking for a living wage and for USA Hockey to fully support its programs for women and girls and stop treating us like an afterthought. We have represented our country with dignity and deserve to be treated with fairness and respect.4

They are also a link in the strengthening chain fighting for equity in women’s sports, following the US women’s national soccer team’s very public campaign for pay, resources, and safer working conditions. Sure enough, immediate solidarity arrived from US soccer star Alex Morgan, who tweeted, “From one #USWNT to another, we are behind you. Everyone help our USA women’s hockey team in fighting for what’s right. #BeBoldForChange.”5

They also received a solidarity message over Twitter from the person more associated with USA hockey than perhaps anyone on the planet: 1980 men’s captain of the gold-winning Miracle on Ice team, Mike Eruzione, who tweeted, “Good luck to the women’s US hockey program as they hopefully can come to an agreement with USA Hockey. You have my support.”6

While many people across the sports world and social media are expressing support for the hockey team, we have to also remember that their absence from the World Championships—the fact that it even arrived at this point—is understandably crushing for those who love the sport. Sports activist and Canada-based hockey journalist Shireen Ahmed sent me the following statement:7

This is so disappointing that the reigning world champions will not be playing—at home—for the IIHF World Women’s Championship. The fact that American women, the best in the world, are not being paid equitably is shameful. They are worth it. Like their soccer sisters, they are pushing forward with a fight they don’t want but must have. They play for the sheer love of the game but to be so blatantly disrespected is infuriating. This changes the level of competition of the tournament. I’m a Canadian women’s team supporter but my solidarity lies with the USWNT on this issue.8

As for USA Hockey, they are scrambling. They released an extensive statement—again providing marvelous content for Rebecca Solnit—detailing the bountiful largesse that has been handed to women’s hockey. “We acknowledge the players’ concerns and have proactively increased our level of direct support to the Women’s National Team as we prepare for the 2018 Winter Olympic Games,” said Dave Ogrean, executive director of USA Hockey. “We have communicated that increased level of support to the players’ representatives and look forward to continuing our discussions.”

I was able to get comment from team star Hilary Knight, who said, “We are disappointed in USA Hockey’s statement suggesting they are paying players $85,000. It is an incredibly misleading and dishonest representation of numbers when they know their monetary support of players doesn’t exceed $20,000 over a four-year period.”9

This struggle is beyond hockey. It’s about fighting for labor rights on a very unequal playing field. It’s about equity and respect in the sports world. It’s about writing another chapter in the odyssey of women in sports, an ongoing epic of a relentless and often exhausting battle. It’s a struggle where every push creates a ripple effect into other areas of athletic life, and even further. A victory for the champion US women’s hockey team is a victory that extends beyond the ice.  10