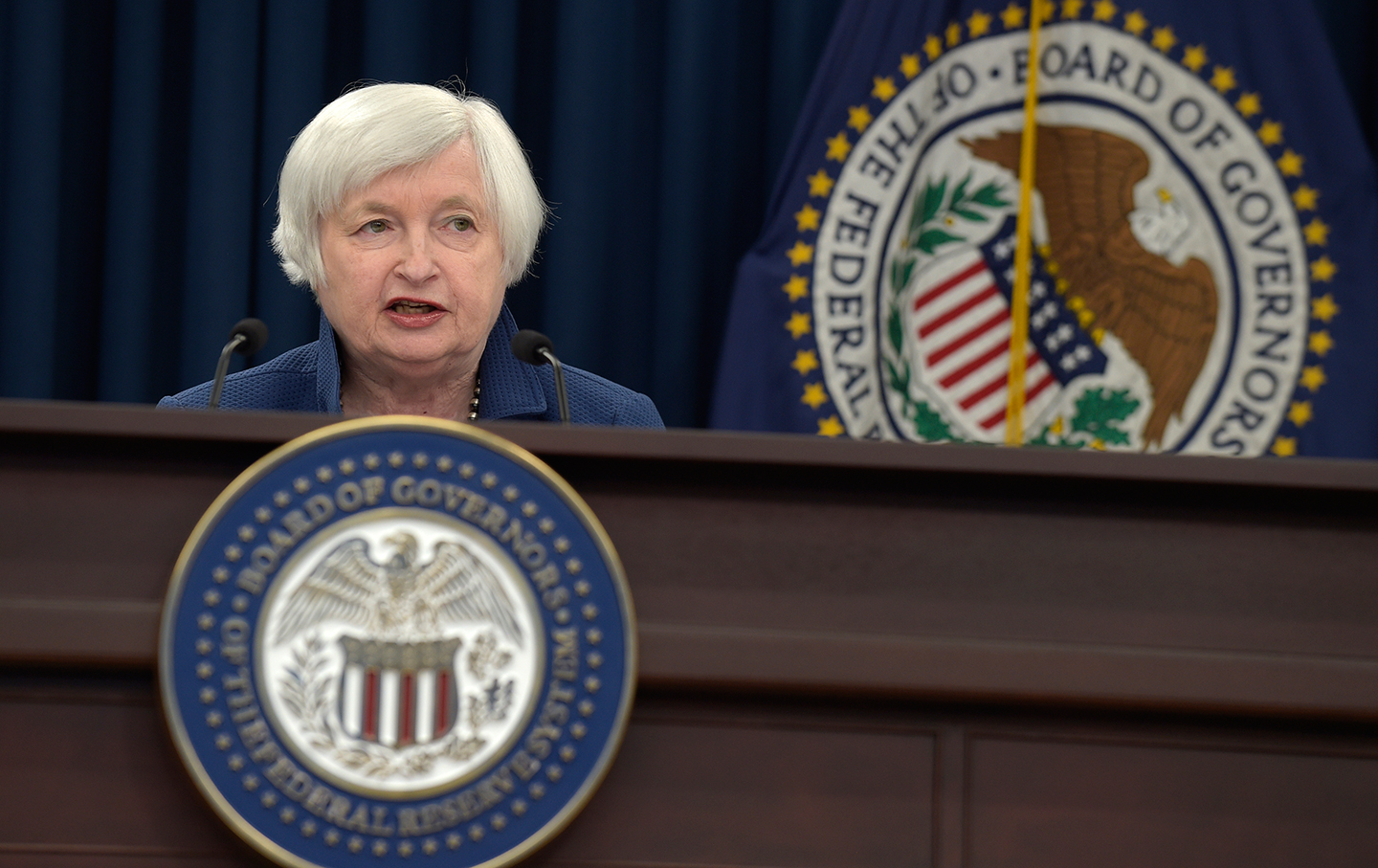 Janet Yellen’s central bank is cautiously tiptoeing toward creating what it claims will be a healthy new normal—the Goldilocks economy that is “not too hot, not too cold.”1

Toward that objective, the Federal Reserve once again raised short-term interest rates this week but only by a smidgen—a quarter of 1 percent. The Fed chairman intends to do the same again soon, hoping to restore a balanced financial system little by little.2

But don’t hold your breath waiting for a genuine economic recovery, the kind that generates stronger growth, abundant jobs, and rising wages. The big bad wolf is still in the woods, still stalking the fragile global economy. Yellen has so far managed to keep things going (albeit slowly) while avoiding the full catastrophe.    3

The present danger is not price inflation but a wildly overpriced stock market.

The present danger is not price inflation or rising wages—the Fed’s usual reasons for tightening credit to slow down things. The imminent threat now is the wildly overpriced stock market, where wishful bulls keep buying more shares. Everyone knows a “correction” is overdue (the Standard & Poor’s 500 index is at 2,381). But if the Fed tightens too fast, it could trigger a massive sell-off, resulting in collapsing financial markets around the world.4

So once again, the mysterious Federal Reserve is cast as the scapegoat and blamed by right and left for holding back prosperity. Yellen’s term ends next February, and we will soon be hearing political demands for a new central banker who will miraculously rescue the economy from the doldrums. President Trump will make the call.5

I am a longstanding critic of the Federal Reserve and its privileged insulation from genuine political accountability. The central bank was created in 1913 to give bankers a preferential role in setting the government’s monetary policy. That undemocratic arrangement continues to distort and ignore the broader public interest. Banking and finance are not a private realm that deserves to be protected from public accountability.6

But don’t blame Janet Yellen for the current dilemma. In the troubled circumstances created by the financial system’s collapse in 2008, the Fed was not the main obstacle to forceful corrective action; it was the elected government in Congress and the White House. In fact, Fed officials, in their awkward, hesitant way, not only introduced a variety of creative monetary tools to revive the economy but also tried to persuade the politicians to take more aggressive fiscal actions to promote a stronger recovery.7

The scandalous failure demonstrated by a lost decade of faltering government interventions was a bipartisan failure of our elected politicians. After Obama’s initial stimulus package of 2009, neither the Obama administration nor Republicans in Congress were willing to follow through with the continued aggressive stimulus—direct government spending on a massive scale—needed to get the economy out of the ditch. Congressional Democrats made some efforts, but never forced the issue in ways that would have built political support.8

A larger lesson is clear: It makes no sense that monetary policy should be governed separately from the government’s fiscal policy and the broader imperatives of economic life and society. In reality, these realms are interacting aspects of the same system. The experts know this, of course, but they respect the fiction because it is politically convenient. The public is injured, however, because this false separation leads to both policy errors and gross public ignorance.            9

The Federal Reserve’s ability to manipulate financial conditions is powerful but insufficient on its own.

Government gets things wrong—big mistakes that injure millions of innocent citizens—because the bankers and their friends at the Federal Reserve prefer to do their decision-making in semi-privacy.10

A more rational system would acknowledge the obvious—that monetary policy and fiscal policy together determine the economy’s operating conditions. If this reality ever became common knowledge, I’m sure the Fed and Congress, with the executive branch, would provide more balanced and public-spirited economic policy. The Federal Reserve’s ability to manipulate financial conditions is powerful but insufficient on its own. That’s what the Yellen Fed—and the Fed chaired by Ben Bernanke before her—demonstrated, through no fault of its policy-makers.11

The federal government does have the ability to step up and force-feed a stronger recovery with massive public spending that goes directly to consumers, workers, builders, and the many other elements of productive economic activity. This is what New Deal politicians learned the hard way during the Great Depression. It seems the country must now learn it again, because similar dangers of inertia are now stalking the global economy. The American political system has the ability to save itself, but that will require overthrowing the dominant political thinking about economics.12

As it happens, Donald Trump inherits roughly the same dilemma. Will he be any different? Trump has proposed, in vague terms, a trillion-dollar stimulus in infrastructure investments. When the Obama administration proposed modest efforts, hardheaded Republican right-wingers in Congress blocked it. Now Democrats could help Trump launch a serious stimulus program to overcome the reactionary resistance in Trump’s Republican Party.13

The point is, it is not just the Federal Reserve that needs to be reformed. Progressives also need to bang on the confused and conflicted political system—parties on both right and left. The alternative is to let the sodden economy drift along for another disappointing decade, feeding the anger and desperation experienced by people in their lives and communities.14