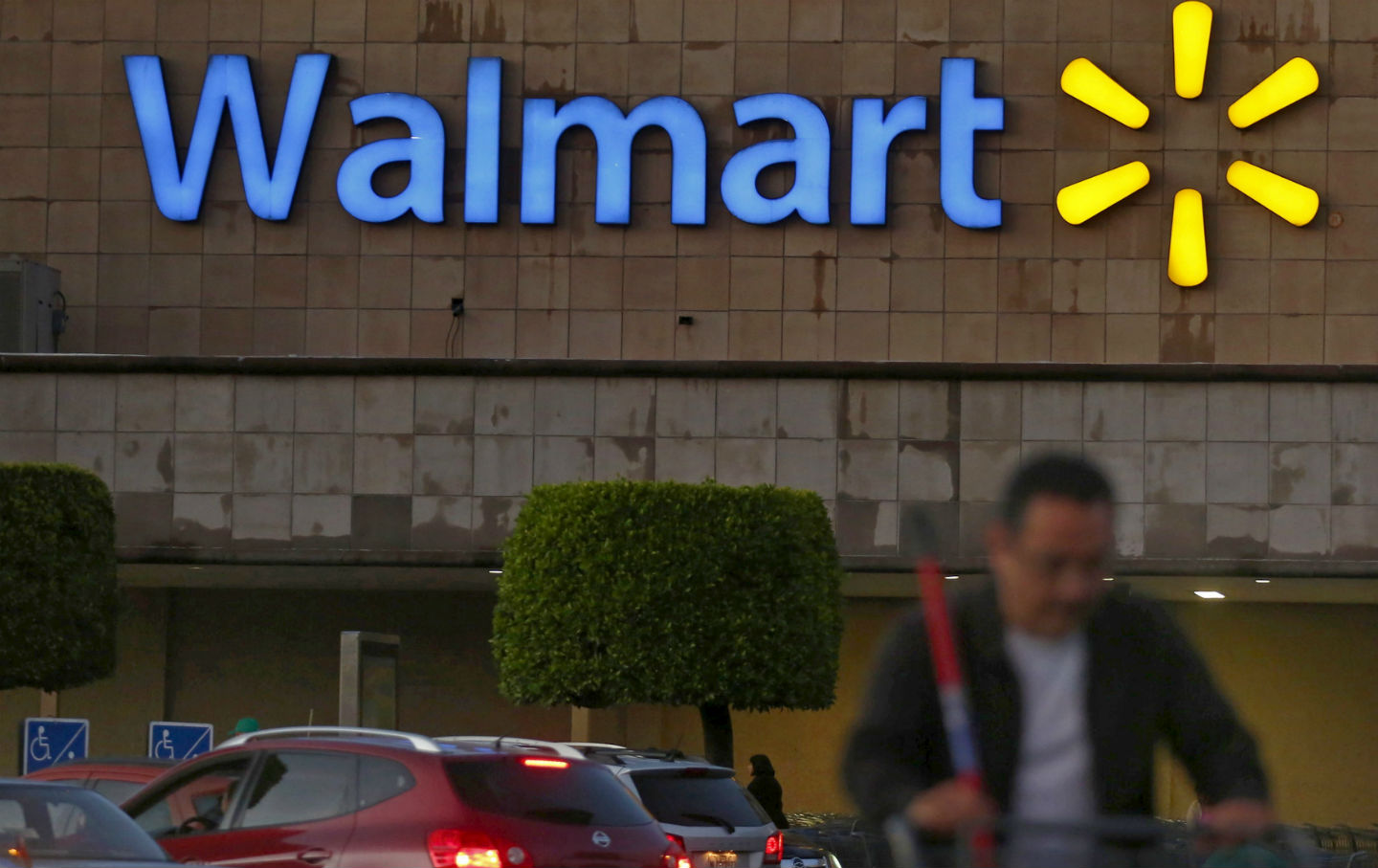 You probably paid a cheap price for those groceries at Walmart this week, but you almost certainly didn’t pay a fair price.

Walmart is a case study of how the “free market” can distort the value of a basic human need: Every price tag in Walmart’s food inventory—which accounts for a quarter of the nation’s grocery bill—is the product of agricultural subsidies, financialized commodities exchanges, and hyperinflated marketing. So to uncover the true cost of cheap groceries, the advocacy group Food Chain Workers Alliance (FCWA) followed the supply chain and uncovered violations at every link in the retailer’s “ethical sourcing” system.

Facing public pressure, Walmart has developed guidelines for ethical and sustainable sourcing, pledging that all outlets and suppliers “must fully comply with all applicable national and/or local laws and regulations…related to labor, immigration, health and safety, and the environment.” Specifically, the company mandates that suppliers follow legal protections for “health and safety of workers” and implement “measures for reducing air and water pollutants, energy and water usage, and waste.” The company recently launched a flashy “sustainability product expo” and rolled out new animal-welfare guidelines for livestock.

The human-welfare department appears to be lagging. While Walmart has come under fire for mistreating its store associates, the supply-chain workers are exploited in even more complex ways, with even less recourse against the company, as Walmart does not directly employ them.

The FCWA charges that Walmart is complicit in the systematic degradation of migrant workers at home and abroad. At the far end of the supply chain, Walmart’s giant market in farm-raised shrimp ties into exploitative fishing boats in the Pacific region’s infamous labor-trafficking system. Walmart profits indirectly from brutally enslaved and abused migrant labors, used to catch feed fish for the burgeoning aquaculture industry.

Walmart’s “savings” from cheap labor gets passed through its US supply chain, too: The federal government recently cracked down on a Walmart egg supplier for “discriminatory practices” in intrusive screening of immigrant workers. One major lettuce supplier, Taylor Farms, has been hit by a wage-theft class-action lawsuit along with scandals over alleged union-busting and abuse of migrant workers in California.

In 2012, Walmart had to cut ties to scandalized seafood processor CJ’s after workers complained of being forced to peel crawfish around the clock, and to suffer 80-hour workweeks, wage theft, and threats from the employer who had sponsored their guest-worker visas.

One such “blacklisted” worker, Martha Uvalle, told reporter Josh Eidelson that her boss had warned workers who challenged him, “I’ll send you back to Mexico.… You’ll never come back.’”

The combination of intimidation and market control runs throughout Walmart’s much-hyped “Heritage Agriculture” program for farmers in the United States as well as “emerging markets” of China and India. In 2010, Walmart announced a five-year plan to “sell $1 billion worth of local food sourced from 1 million small and medium farmers,” with potential growth in farmers’ incomes by 10 to 15 percent. But five years on, participating growers have reportedly not seen the promised bounty and complain of unfair contracting. Similarly, the report notes, Walmart dominates in a corporatized milk market that decimates small dairy farmers, leading to severe industry consolidation and price drops of as much as 40 percent for farmers.

Responding to the report, Walmart sent a statement to The Nation explaining that, “While there are complex issues inherent in the global supply chain, we bring together numerous stakeholders, NGOs and other private sector companies to help find solutions.”

FCWA, which promotes labor organizing across all food sectors, believes in systemic solutions at the grassroots. That means not boosting organics production at the expense of the wages of Mexican strawberry farm workers, and ensuring that cheap groceries for poor families in Bakersfield don’t come with the kind of hazardous waste Walmart has dumped around Los Angeles. The problem is that Walmart’s business model profits by maldistributing the social costs of mass production across an atomized food chain.

The FCWA calls on Walmart to redistribute resources up the supply chain by raising the hourly base wage for its direct workforce to $15. It can then spread those ethics through similar minimum wages for US workers at Walmart suppliers and “comparable living wages in other countries,” plus basic benefits like paid sick leave. And Walmart should support all workers’ right to organize and pursue collective bargaining, which the company has long suppressed, even in its own stores.

Of course, many of these demands could be satisfied if Walmart just followed existing law. Hence the central contradiction of “corporate social responsibility”: the concept of private-market voluntarism reflects the subordination of government to brands that put profit above the law. As the industry lobby presses for more tax breaks, corporate benevolence thrives as a manufactured solution to a crisis engineered by corporations. Ethics is reduced to a matter of noblesse oblige, not human rights.

FCWA Co-Director Jose Oliva says via e-mail, “Breaking labor and employment law has become part of the business model for these firms,” citing a “supply chain dominance” model at Walmart that “has pushed most of these suppliers to the breaking point where they’ve incorporated law-skirting and all-out law-breaking into their business model.” But beyond demanding social responsibility from Walmart, FCWA would support “a third-party entity that would have power independent of Walmart” overseeing the supply chain. Ideally, this would require the designated government regulatory agencies to be fulfilling their own legal responsibilities.

But could Walmart’s consumers have it both ways, retaining low prices and maintaining fair standards for workers? Oliva says this can be done by spreading around the company’s unethically sourced profits: “Pay fair wages and prices so that people can afford the good food. Just like Ford did in the 1930’s, pay your workers so they can afford a dignified life and you create an upwards spiral. Walmart’s profit margins can afford it.”