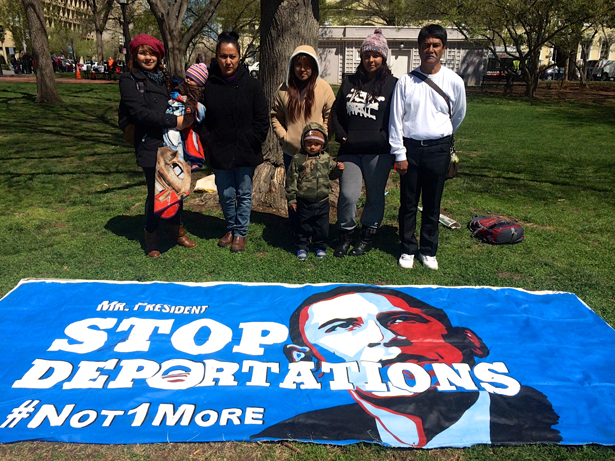 Ernestina Hernandez (second from left), Cynthia Diaz (center), José Valdez (far right), and other members of the Not1More Deportation campaign, who are on hunger strike near the White House in Washington, DC (Zoë Carpenter).

When José Valdez talks about his son Jaime, his eyes shine.

“He is one of the sweetest young men you’ll ever meet,” José said on Wednesday through an interpreter. “I don’t say that just because I’m his father. He’s a young man who likes to help people. He thinks about humanity. Anytime he sees something that’s uncomfortable he sees a way to try to help. He’s dedicated to study.”

It was a frigid morning in Washington, and José was shivering. He looked across Lafayette Park towards the White House. “I came to DC to ask that my son be let go from detention,” he said. For five days José fasted on President Obama’s doorstep, protesting his son’s treatment and the deportation of millions of other undocumented immigrants under Obama’s tenure.

With House Republicans refusing to move on immigration reform, activists have asked the president to use his executive authority to change the country’s deportation procedures. Of all the effects the broken immigration system on families, deportation gauges the deepest wounds, taking husbands from wives, sons from fathers, and often without due process. It’s also the area over which the president has the most power. But Obama has been reluctant to move before Congress, despite mounting pressure not only from activists but also from prominent members of his own party. On Tuesday, religious leaders who’d met with the Obama at the White House reported that he made it clear to them that he was still not planning executive action.

Though small, the ongoing hunger strike in front of the White House—part of the Not1More Deportation campaign organized by the National Day Laborer Organizing Network—reflects a swell of frustration within the immigrant community at the administration’s apparent unwillingness to act. It also illustrates the desperate stakes for the thousands of families at the mercy of Washington.

This hunger strike was not José’s first. In February he refused to eat for fifteen days in solidarity with Jaime, who had been detained during a traffic stop in Maricopa County and held for months at the Eloy Detention Center after his lawyer told him to plead guilty to a DUI charge he has said was inaccurate. Jaime was in the midst of his own hunger strike when, in the middle of the night on February 25, he was deported to Mexico. On April 1 he returned through the legal port at Nogales, Arizona, and asked for humanitarian parole; now he’s once again in limbo, at the Florence Correctional Facility. “It makes us sad, but it gives us the will to fight,” José said.

Jaime is not José’s only son. His two older brothers were deported, and one of them still lives in Mexico. When I asked José about the other, the light in his eyes spilled over. “The other is also in Mexico,” he said. “But he is not with us.” This middle son was murdered shortly after returning to Michoacán, a state on Mexico’s west coast wrecked by the drug wars.

“My first two sons, there was nothing I could do for them,” said José. “But my third, I’m going to make sure that he’s not deported again, and that he gets to come home.”

Ernestina Hernadez describes her husband as “a normal man,” committed to his tech work for General Plastics in Houston, Texas, where he worked for eighteen years. He rode bicycles and shared a sense of humor with their 13-year-old daughter, Melanny. In May of 2013, Manuel was asked for his ID after being pulled over. He was deported on his 50th birthday and now lives in Durango, not far from a tree where recently, he told Ernestina, the body of an 8-year-old boy was found hanging, his organs removed.

“That’s the country President Obama wants me to take my daughter to,” said Ernestina, referring to the impossible choice that deportation leaves with families: separate indefinitely, or reassemble a life together in country made bloody in no small part by America’s appetite for illegal drugs. “I would ask him, do I keep fighting? Or do I stop?”

Like Jaime, Ernestina’s husband was in the midst of a hunger strike when he was deported from the Joe Corley Detention Center in Conroe, Texas. Ernestina and José Valdez both believe the sudden deportations of their husband and son, respectively, were retaliation for their civil disobedience within the detention centers. Across the country in recent months hundreds of detainees have refused meals to protest their treatment within the detention facilities— many of them operated by private contractors like GEO Group, which runs Joe Corley— as well as within the immigration system more broadly. Hundreds of detainees on hunger strike in a GEO Group facility in Washington State were threatened with force-feeding last month. More than twenty were then moved into solitary confinement. Five busloads of detainees, including several of the strikers, left the center early Monday morning, activists say.

Ernestina said that Melanny’s schoolwork, her social life and her emotional health all suffered after her father was deported. “She gets really sad, and tells me that she wants to see him,” Ernestina said. “The day that my husband was deported she was shaking. She cried a lot. I was worried that she would get sick.” She continued, “When it happened, everything stopped. There isn’t anything left—it doesn’t seem like we have a future.”

But not having anything to lose has also emboldened Ernestina. Normally a quiet person, she says that by fighting for her husband and others like him, she’s “learned to talk. Staying quiet, nothing is going to be fixed.” She was one day into her fast in front of the White House when we spoke, and seemed calm and determined. She’d originally planned to leave on Saturday, but news of Obama’s comments to religious leaders had so angered her that she now planned to remain indefinitely, until she receives a response from the White House.

On a Saturday morning in May 2011, Immigration and Customs Enforcement raided Cynthia Diaz’s home in Phoenix and arrested her mother, Maria. Maria, who’d immigrated to the United States at 14, graduated from high school and community college and then started a small tailoring business, called the following afternoon from Mexico to tell her family she’d been deported.

Cynthia was 15. She learned how to cook and to clean, and took on her mother’s role for her younger brother while keeping up with schoolwork at an honors high school. Now she’s a student at the University of Arizona. The hole left by her mother lingers at the house where her father and her brother still live; when Cynthia goes home, she finds the kitchen littered with pizza boxes, the fridge empty. “We’ve been really unhealthy,” she said. Cynthia became active with immigration rights groups at the end of high school, and has been fighting for her mother ever since.

In March, Maria crossed back into the US as part of a campaign called “Bring Them Home,” in which several immigrants who’d been deported returned to request asylum. Two weeks ago she had her eligibility interview. With her mother’s fate uncertain, Cynthia came to Washington for the strike, against the wishes of her father who worried that her petite body couldn’t handle the stress. She hoped that somehow her mother might make it home in time for Mother’s Day.

The hunger strike was hard, Cynthia admitted. The spring weather swung between hot, sunny days and frigid nights. She was fatigued and had headaches. Speaking to her mother on the phone helped.

On Tuesday, after Cynthia had ended her strike, she received a call from her mother. She’d gotten the results of her interview.

“She passed,” Cynthia told me, as if she could not yet allow herself to believe it.