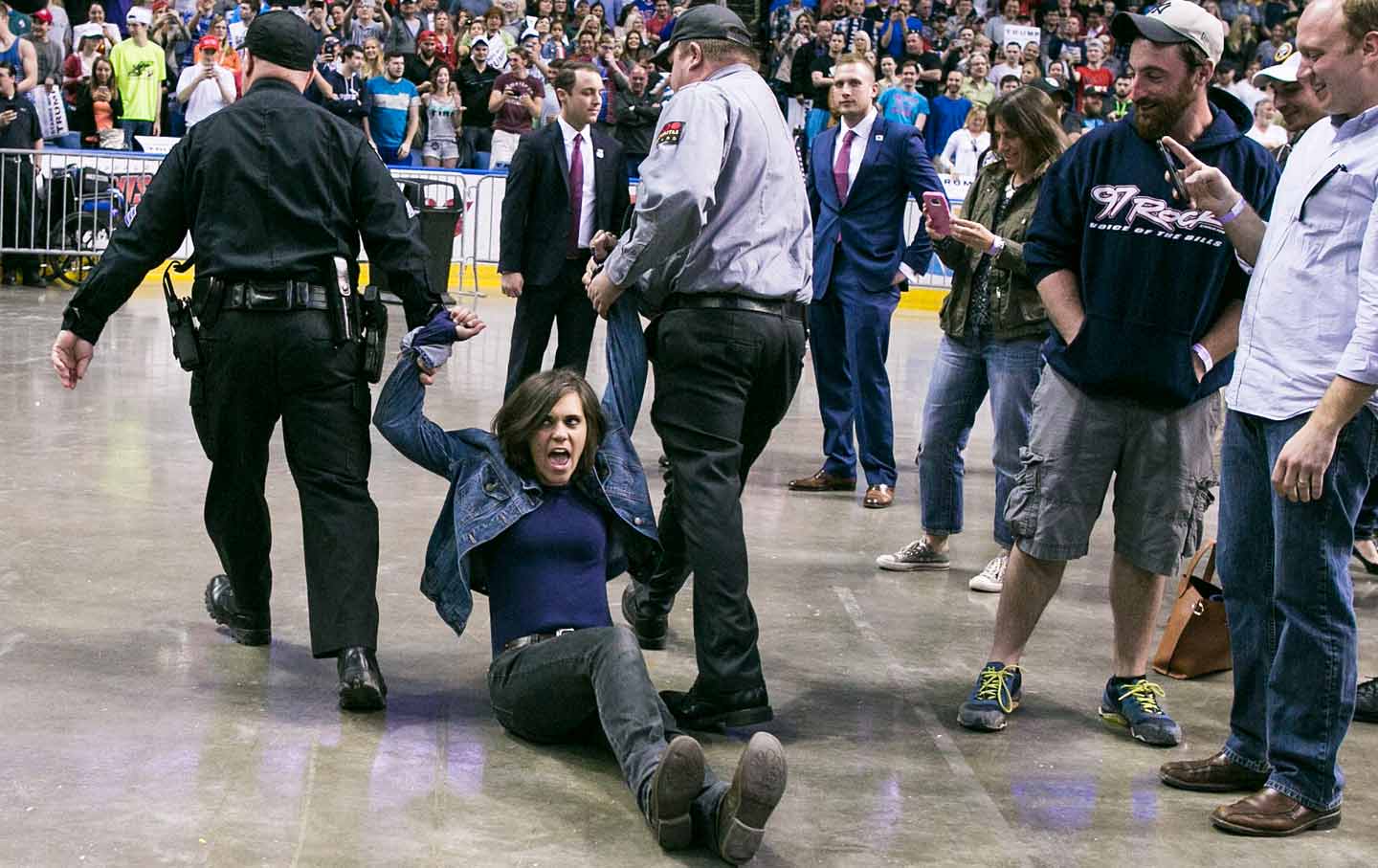 Buffalo, NY—The protests against Donald Trump on Monday weren’t the biggest he faced, nor will they dominate the next-day media coverage. Judging by early returns, that honor will go to Trump’s odd mistake of calling the September 11, 2001, terror attacks “7/11.”

But that doesn’t mean the protests aren’t important. As Trump travels the country during the never-ending Republican primary, he is continually activating dedicated resistance from activists who risk arrest, and worse, to deliver their message. That was certainly the case in Buffalo, where a large group of young residents, many of them black, engaged in civil disobedience aimed at disrupting one of the largest rallies of Trump’s presidential campaign.

The city was the perfect stage for Trump. Local businessman Carl Paladino ran for governor in 2010 with themes now recognizable as Trumpian: deliberate political incorrectness, articulated rage at elites, and a hard-right platform. In Erie County, which contains Buffalo, he walloped Rick Lazio in the Republican primary with over 90 percent of the vote.

During his warm-up speech for Trump in the First Niagara Center on Monday, where 11,000 people created a rock-concert atmosphere for the mogul, complete with an arena-wide wave, Paladino rehashed these same themes while exhorting the genius of Trump’s planned wall on the southern border.

“That wall means so many different things to us. It means an end to our acceptance of a media thinking for us and telling us how to act. It means what we’ve watched for the past seven years in Washington is disgusting, and we’re tired of it, and we’re not gonna take it anymore,” he said. Paladino directed the crowd to turn around and face the media pen at the back of the arena floor.

“Turn around and tell that to the press. Tell them how mad we are. You’ll notice that they put their pants on the same way we do, one leg at a time. There’s nothing special about those people,” Paladino thundered, as the crowd jeered the assembled local and national media. “That festering anger that we’ve been carrying with us for so long—and suddenly a guy comes on the scene who not only thinks the way we think but he speaks the way we think, and we know he will do what we think.”

In a brilliant marketing coup, Trump got Buffalo Bills coach Rex Ryan to introduce him and whip the crowd into a frenzy. And who better to stump for Trump than a football coach who has spent the past year bombastically promising wins that he can’t deliver? (The Bills missed the playoffs once again last year, for the 16th straight season.)

Trump promised a lot of wins—so much winning. “As soon as we beat Hillary Clinton, we are going to start, as a country, winning again. We’re going to win on trade, we’re going win with ISIS—we’re gonna knock the hell out of them fast,” Trump said, as the crowd roared.

Trump hit all the notes one would expect in a Rust Belt city ravaged by deindustrialization and free trade–related job loss. The state shed 377,000 manufacturing jobs just since the passage of NAFTA, and Buffalo was among the worst hit, though the bleeding started back in the 1970s. “You guys are being decimated…. In Buffalo we have to talk jobs,” Trump said. “We’re going to make the greatest trade deals ever made. We’re going to become so strong, so powerful, so rich we’re going to be so proud of our country again.”

Amidst this tailor-made scene for Trump, on the eve of the New York primary, the protesters made their voices heard.

Within one minute of Trump coming on stage, as he was bragging about making a billion-dollar offer for the Buffalo Bills in 2014, around 15 protesters locked arms and started chanting “No Trump, no KKK, no racist USA!” They locked arms and dropped to the floor, creating a difficult task for momentarily befuddled security staff.

Video of distuption at Trump protest: “No Trump, no KKK no racist USA.” They then sat in a chain on the floor. pic.twitter.com/5TIGL7hzRN

Erie County Sheriffs began clearing out the protesters, resorting to physical force after unsuccessfully pleading with the protesters to move. Trump had to momentarily stop his speech, berating the protesters and telling security to “get ‘em outta here,” but he had no choice but to resume his speech as the demonstration continued because it was taking so long to get the protesters off the floor. Officers were being directed on the scene by Erie County Sheriff Timothy Howard, who has personally endorsed Trump and suggested in 2013 that he would not enforce the gun control law signed by Governor Andrew Cuomo.

Only two of the protesters were actually arrested, for reasons that remain unclear. Whitney Yax, a protester who was not arrested, spoke with The Nation outside central booking in downtown Buffalo as she waited for her friends to be released.

“We noticed up to this point that other protests, when they were asked to leave, they left at some point. We thought: let’s refuse to leave and see how long we can make it last,” she said. “For me, Trump is coming here to Buffalo, to my city, where I was born and raised. He’s continuing to build his movement for racism, for violence, for white supremacy. I want to do whatever I can for as long as it takes to disrupt that.”

All of the protesters arrested inside the arena were white. But their larger activist group is definitely not: It’s just that the non-white members decided to demonstrate outside the arena instead of coming inside to disrupt Trump’s speech.

“A lot of the discussion was about how it’s the work of white folks to get white folks,” said Natasha Soto, one of the activists who stayed outside. “We know systems of oppression exist, and it’s not necessarily our job to convince people of our humanity and to respect us and treat us decently. It’s the focus of folks who look like that to do that.”

Instead, the black activists outside planned to sit down in front of the light-rail train leaving the arena after the rally. Police had forbidden parking within a mile of the First Niagara Center, so the train was the only way out for most of the attendees.

“We were going to block the train so that Trump’s supporters couldn’t go home, to represent the fact that we can’t rest as people of color in the sixth-most segregated city in the country. We were going to sit and not let them go home until we could rest,” said Shaketa Redden. The plan was foiled by a strong Buffalo police presence that lined the train line with wooden batons and pushed protesters away from the tracks.

The night before the rally, The Nation met with several of the activists who planned to block the train tracks. They were eager but clearly tense about what might happen the next night, and described frustration with a lack of activism and protest in a city rife with problems. They said many of their young friends had left, and noted that the average voting age in one of the majority-black City Council districts in the city is 61.

Many of the activists I spoke with shared the same feeling that protesting Trump on a Monday night in Buffalo was part of something much bigger. “We’ve seen it happen throughout history, we’ve seen it happen in the civil-rights movement. People were engaged in civil disobedience and actually putting their bodies on the line to change things,” Redden said. “This puts Buffalo in connection with the rest of the country, connected to all of our allies across the country—Black Lives Matter and people who fighting for black liberation.”

Update 4/26: Local activist Rhyson Hall made this video of the protest scene: