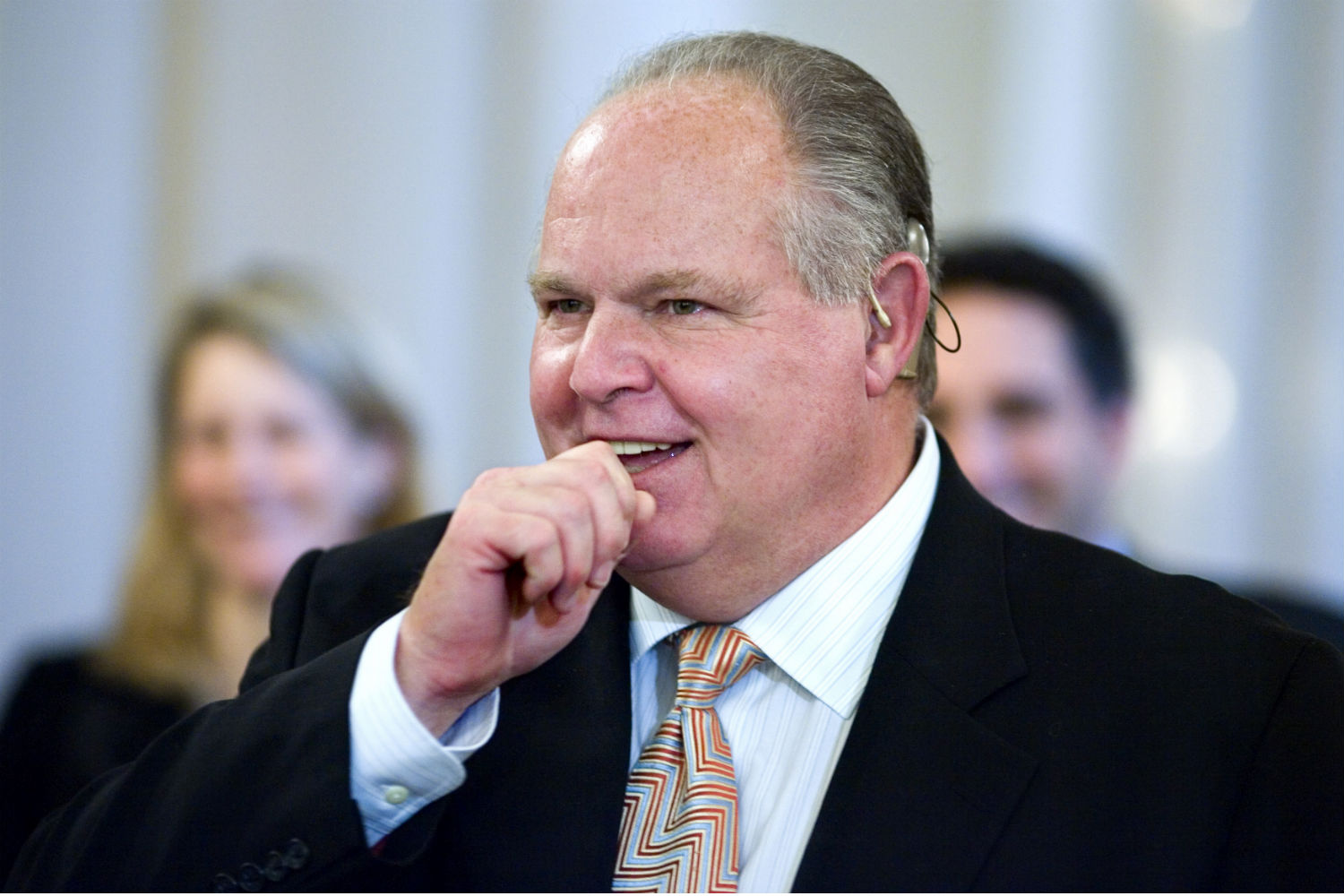 Editor’s Note: This story was supported by The American Independent Institute.

For years, women’s groups have bristled at Rush Limbaugh and his litany of inflammatory, sexist statements on women. The conservative radio host has referred to feminists as “feminazis,” Georgetown Law student Sandra Fluke as a “slut” and a “prostitute” and female cabinet members as “Sex-cretary of State” and “Sex-cretary of [Health and Human Services].”

But Limbaugh’s comments rarely cross the line for the Independent Women’s Forum, a group that time and again has staunchly defended the talk radio powerhouse. There may be a reason, other than a shared ideology, why the IWF has so often come to Limbaugh’s defense when other women’s groups have cringed at his utterances: money.

According to previously undisclosed tax documents acquired by the American Independent, Limbaugh cut a check in 2007 to the IWF for just over $273,000. Though I studied the past decade’s worth of tax records, it was impossible to determine how much more Limbaugh may have given in recent years. Since 2009, donors to the IWF began cloaking its contributions by running them through the right-wing’s biggest donor-advised fund, DonorsTrust.

That money may have been used to pay for IWF dinners honoring Nancy Brinker of the Susan Komen Women’s Foundation and Condoleezza Rice according to comments made by former IWF CEO Michele Bernard in March 2012. Bernard, appearing on MSNBC’s Up with Chris Hayes, said that Limbaugh has paid “several hundred thousand dollars out of his own pocket” to underwrite these dinners.

Limbaugh did not respond to requests for comment about the intended use of his contribution.

Since Limbaugh’s contribution, the IWF has loyally defended him on a range of issues after he’s made highly offensive remarks that few others supported. In 2007, Limbaugh waded into controversy by appearing to refer to Iraq war veterans critical of the war as “phony soldiers.” Limbaugh contended that he was only referring to persons falsely claiming to be veterans. IWF had his back. “[Democrats’] push for an immediate pullout of Iraq has been stalled. Tarring Rush Limbaugh as anti-American soldier [sic] helps with both problems: it satisfies their base, who has [sic] been disappointed with Congress’s inability to exit Iraq, and gives them an opportunity to say that they support the military in spite of the attacks on General Patraeus [sic],” wrote Carrie Lukas, the IWF’s managing director.

The IWF found itself in a difficult position in August 2011, when Bernard went on C-Span’s Washington Journal and criticized a 2009 statement from Limbaugh in which he stated, “I hope Obama fails.”

Bernard said to C-Span, “Rush Limbaugh…said he doesn’t want the president to succeed… it’s beyond explanation.” The IWF rushed out a statement defending Limbaugh’s controversial 2009 remarks, emphasizing that Bernard “is no longer affiliated with IWF, and her views do not reflect the views of IWF’s board or staff.”

“We at the IWF understand exactly what Rush meant when he said he hoped the President would fail,” said the statement, which explained the group’s support of Limbaugh’s comments.

“[The Obama] administration’s actions in the last two and half years have confirmed our worst fears, as government has increasingly meddled in what used to be known as the private sector, exacerbating our economic problems and dramatically increasingly our national debt. Of course we want the President to fail at advancing his Big Government agenda. That’s because we want the country to succeed.”

And in 2010, after Limbaugh served as a judge for the Miss America pageant, the IWF defended him when Fox News’s Gretchen Kelly confronted him with the fact that there are “critics of you in judging the pageant [who say] that you haven’t been a supporter of women in the past.” Megan Carl, an IWF junior fellow, wrote, “There are women around the globe who have not yet won the battle of equal treatment under the law, who are still in need of equal rights (human and legal). They deserve the chance to pursue happiness and to compete in a global marketplace. Fighting for their rights should be the next front in the women’s movement—not Rush Limbaugh.”

Limbaugh’s biggest controversy since 2007 came following his February 29, 2012, characterization of Georgetown University Law Center student Sandra Fluke as a “slut” and a “prostitute.” Fluke, earlier that week, had spoken in support of the government mandating insurance coverage for contraceptives.

Groups across the political spectrum condemned Limbaugh’s remarks, and Limbaugh, in a rare instance of walking back his rhetoric, apologized to Fluke. How did the IWF respond? Instead of going after Limbaugh, officials penned a series of attacks on Fluke. In March of 2012 alone, the IWF published nine posts criticizing Fluke.

Lukas tried to explain Limbaugh’s remarks in a March 7, 2012, column that began, “Full disclosure: I’m a regular listener to Rush Limbaugh. I enjoy his political perspective and humor, and am generally impressed with his treatment of his callers, which non-listeners might not know is overwhelmingly respectful and cordial, even when he disagrees with them on the issues.”

Lukas went on to say she knew what the talk show host was really trying to say. “From listening to Rush, I know what point he wanted to make,” Lukas said. “He wanted to highlight the absurdity of women, under the banner of feminism, who want to be seen as independent as they try to force other people to pay for their choices and lifestyle. Painting yourself as a victim for having to figure out how to buy your own contraception, especially when you are enrolled at one of the nation’s most prestigious law schools, is pretty difficult to mesh with the idea of true independence.”

Though Hays did offer some tepid criticism of Limbaugh’s crude name-calling, she used the opportunity to turn the outcry into an attack on other women’s groups.

“Although I in general get a kick out of Rush, I didn’t care for his crude remark about Sandra Fluke either. (I have a thing about chivalry.),” wrote Hays in a March 13, 2012, post. “But the feminist troika is calling for the FCC to suppress Limbaugh.” (The “troika” Hays refers to is comprised of Jane Fonda, Robin Morgan and Gloria Steinem, who teamed up to write a March 12, 2012, op-ed for CNN.com, calling on the FCC to “clear Limbaugh from the airwaves.”)

Despite Lukas’s reference to providing “full disclosure,” I could not find any instance in which Lukas, or Hays—or any current IWF official, for that matter—has ever publicly recognized Limbaugh’s financial support of the group. (Bernard mentioned Limbaugh’s role in underwriting IWF dinners after she had left the organization in 2010.)

Just three weeks before the Fluke incident erupted, Limbaugh spoke glowingly about IWF and its depiction of him as “Braveheart in a political sense.”

“Now, there was a piece today from the Independent Women’s Forum, Charlotte Hays. I am familiar with this group,” said Limbaugh on February 8, 2012. “Members of this group have often referred to me as Braveheart in a political sense…. They sorta created themselves as the alter ego of the feminazis. They appreciate strong men. They want strong men. They desire a role for strong men in relationships and in the world, in politics and all of this. They’re a good bunch of people.”

The IWF, founded in 1992, grew out of “Women for Judge [Clarence] Thomas,” an organization supporting Thomas against Anita Hill’s allegations of sexual harassment during his confirmation hearing. According to the group’s mission statement, the IWF aims “to expand the conservative coalition, both by increasing the number of women who understand and value the benefits of limited government, personal liberty, and free markets, and by countering those who seek to ever-expand government in the name of protecting women.”

It would make sense that a group with such a mission would attract conservative funders, and IWF has. A 2007 list shows that Limbaugh was the group’s single largest individual donor that year. Conservative megadonors Charles and David Koch contributed $125,000 via their subsidiary company Flint Hills Resources and another $250,000 through their Claude Lambe Foundation. Ken Kendrick, the managing general partner of the Arizona Diamondbacks Major League Baseball Team, and his wife, Randy, contributed $77,000. The IWF also received $392,000 in 2007 as part of the State Department’s $10 million Iraqi Women’s Democracy Initiative, a program intended to teach Iraqi women about democracy. All told, Limbaugh’s contribution accounted for 16 percent of the group’s $1.7 million in direct public support that year.

We can easily infer that when your biggest financial contributor in a particular year is one of the most misogynist racist voices in media and politics, it becomes a lot more clear that the independence in your name is specious at best,” said Jennifer L. Pozner, executive director of Women in Media and News.

“Despite [the IWF’s] claims of being a pro-women organization, Limbaugh’s contributions just underscore how regressive and anti-woman the project and mission of that organization have always been and continue to be,” added Pozner.

Neither Bernard nor the IWF responded to requests for comment about the contribution from Limbaugh.

Defending Limbaugh hasn’t been the only unpopular position the IWF has taken in recent years. Indeed, the group is no stranger to disfavored political opinions. In 2009, the IWF released a YouTube video claiming that “300,000 American women with breast cancer might have died” if government-funded healthcare had been available. And in 2013, IWF senior fellow Gayle Trotter told a Senate committee on new gun regulations that “guns make women safer” and labeled the AR-15 assault rifle “weapons of choice” for women. “Using a firearm with a magazine holding more than ten rounds of ammunition, a woman would have a fighting chance even against multiple attackers,” said Trotter.

Yet despite Trotter’s and IWF’s promotion of guns as tools to protect women against violence, the IWF has been an outspoken critic of the 1994 Violence Against Women Act. Following the VAWA’s February, 2013 reauthorization, the IWF blasted Congress, issuing a statement that read, “What concerns us most is VAWA includes no provisions for financial oversight, views violence more through an ideological lens than a practical one, erodes constitutional rights of the accused, and perpetuates the idea that society is hostile to women.”

Indeed, Limbaugh’s contribution to the IWF raises questions about the group’s role in defending the rights of women. “There must be some reason he gave that donation,” said Eleanor Smeal, president and founder of the Feminist Majority Foundation and former president of the National Organization for Women (NOW).

“[Limbaugh’s] a spokesperson for the right wing and these kinds of groups make the right look bigger. The whole thing about the IWF is they were formed to represent the majority that wasn’t NOW. They were a media project, they aren’t a grassroots project. This is a Washington based group to neutralize the women’s movement.”