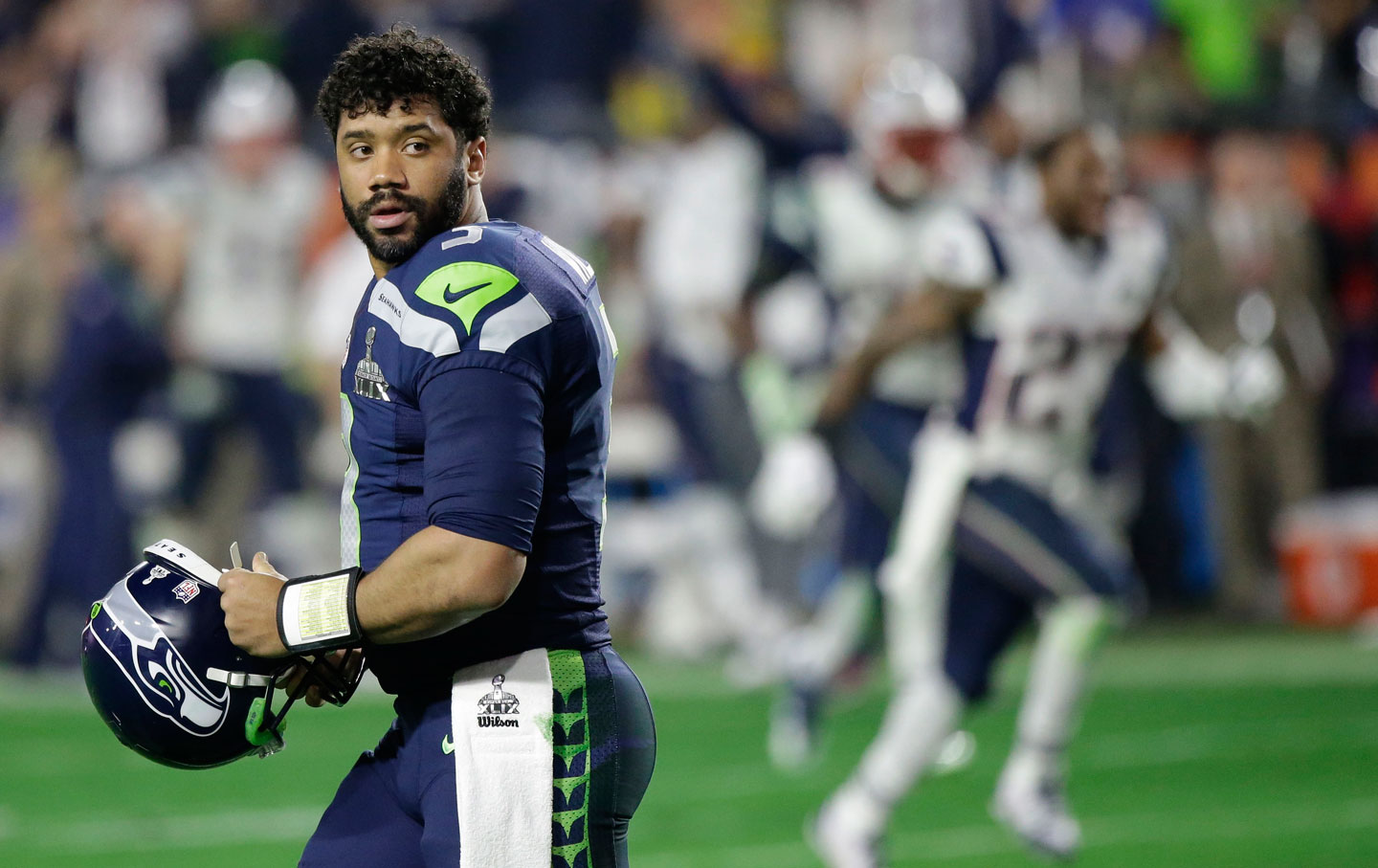 Seattle Seahawks quarterback Russell Wilson looks back after throwing an interception during the second half of Super Bowl XLIX . (AP Photo/David Goldman)

Aaron Rodgers, the Green Bay Packers’ All-World quarterback with Berkeley pedigree and long established hipster’s snark, threw some shade on Seattle quarterback Russell Wilson after Green Bay’s 27-17 victory on Sunday. In the post-game version of sub-tweeting. Rodgers commented that God “was a Packers fan tonight,” as he seemed to visibly fight a grin. Rodgers’s comments, subtle as a blowtorch, are being read as a direct response to the garrulously religious Seattle quarterback Russell Wilson’s comments after last year’s truly “miraculous” come-from-behind playoff win over the Pack when he said that a Higher Power made him throw four interceptions because, “That’s God setting it up, to make it so dramatic, so rewarding, so special.”

Rodgers, upon hearing Wilson’s comments in the wake of a bitter defeat, said, “I don’t think God cares a whole lot about the outcome. He cares about the people involved, but I don’t think he’s a big football fan.” Nine months later, Rodgers jabs back with a holy joust.

Without question, it is more than understandable that so many football players speak about God as if He (always “He” in the NFL) is the Big Coach in the Sky, scripting outcomes like Vince McMahon with a baggy sweatshirt and a headset. In a game when any play can be your last, when crippling injuries can often take place in the most random and undramatic of ways, when a lifetime of brain disease is a distinct possibility, it doesn’t take Thomas Aquinas to figure out why thinking there’s an angel on your shoulder could feel like a bonus.

Yet the locker-room incursions of groups like the Fellowship of Christian Athletes and Athletes in Action have turned college and pro football into religious spaces controlled by a very political strain of Christianity, one that demands that its adherents use their athletic platform to praise Jesus at every turn. These devout jocks are ascribed to having “character” and “intangibles” that less religious players would almost certainly not possess. (Think about the deification and continued opportunities of Tim Tebow, a k a “the Quarterback Who Cannot Throw.”) Players who were Muslim, Jewish, Catholic, or just irreligious have long told stories of finding themselves on the outside looking in.

Far from the fictitious “War on Christianity” bleated by those on the GOP debate stage, the nation’s most popular cultural product is a constant megaphone for a particular version of Christ, even though the stadiums are funded by the government and the network airwaves are—allegedly—for all of us. In other words, when it comes to football, there is no separation between God and the public square.

Hearing Aaron Rodgers give a little nationally televised pushback against the idea of a higher power being deeply invested in a football game is as satisfying as it is overdue. It also comes a month after the off-season story of Pro Bowl running back Arian Foster “coming out” as an atheist with a stirring 15-minute video he made for the organization Openly Secular. Yes, the 21st century’s loud and proud atheists can be some of the most self-satisfied boors on the political landscape. Comedian W. Kamau Bell tells a story in his stand-up of a white friend on Facebook who tells him that he knows what it’s like to be black because as an atheist he has faced oppression. Kamau responds, “Look, if Howard Zinn never wrote about you, then you aren’t oppressed.”

Yet this is not Foster. In the context of the sports world, his video confession was both risky and courageous. In it, Foster speaks about his longstanding fear of losing business opportunities or endorsements if he told people how he felt. “I think I’m at the point in my career now where none of that really bothers me, and I understand who I am as a person, and I believe that means more to me than the extra dollar.”

Foster, who visited Occupy Wall Street after the NFL players lockout of 2011, talks about going from San Diego to play in the Southeastern Conference and saying, “When I went to Tennessee, I was like the first person that didn’t believe in Jesus Christ that a lot of these kids have ever seen. And so they looked at me, like, I remember them asking me, ‘Do you worship the devil?’ and things like that and I’m like, ‘I don’t… I don’t worship the devil.’ And so we got into a lot of debates, a lot of them got very angry with me, a lot of them wouldn’t talk to me, and so you kind of feel that, but I think, we were stuck there together for four or five years, so, as time went on, they understood that I’m a pretty good human being, I just don’t believe what you believe.”

Foster also speaks movingly about why he decided to speak out, saying, “Whether or not you believe I’m going to hell for what I believe, like, I’m still here, and you still have to share this space and time with me. So, if Jesus was here, or if Muhammad was here, or whoever was here, like, I’m pretty sure he would want you to treat me kind. And if he doesn’t, that says a lot right there. I just want to treat people kind, to the best of my ability.”

That last part is important, because even though Foster says he was influenced to go public by comedian Bill Maher, he clearly rejects the brutal Islamophobia and contempt for religious people that Maher, Richard Dawkins, and adherents of the New Atheism profess. “My stance is more, let’s all try to figure it out together,” he says. “I’m not against you. I would love to know, just as well as you would. I know you know in your heart of hearts, you know, so does the Muslim, and so does the Buddhist, everybody knows in their heart of hearts that their god is the one true god, and I’m like, well, if there is, let’s find out. I’m okay with that.… so let’s scour the universe and see if we can find some evidence and some backing, and I’m okay with that, I’m open to all of that. I just think that our brilliance as a society is in our science. I really do.”

Foster is not the first NFL player by any means to be an atheist. Pro Bowl running back Robert Smith and the late Pat Tillman held similar beliefs. But Foster is the first to try and explain it in a way that tries to connect with his teammates, family, friends, and the public. The fact that this holds a widely recognized risk says a lot about the NFL and how we police the speech of these highly influential, young, mostly black athletes—it’s hard to imagine anyone would care if George Clooney gave a speech about being a secular humanist.

Yet whether in the form of Foster’s deep meditations or Rodgers’s jibes, this kind of pushback should be welcomed. There may be grand divisions over the belief that religion is either a force for a greater good or a fetter on humanity, but it would probably be healthy if we could agree that if there was a God, then this all-powerful force doesn’t care a great deal about football. More accurately, the baptizing of this sport in holy waters further obscures just how the sausage is made in the NFL. It’s a sport with a filthy underbelly that has never been more in the public eye. When calculating the brain injuries on the field alongside the boozing and bacchanalia off of it, and when considering that the NFL has colonized Sundays of all days, it is clearly nothing if not the devil’s workshop.