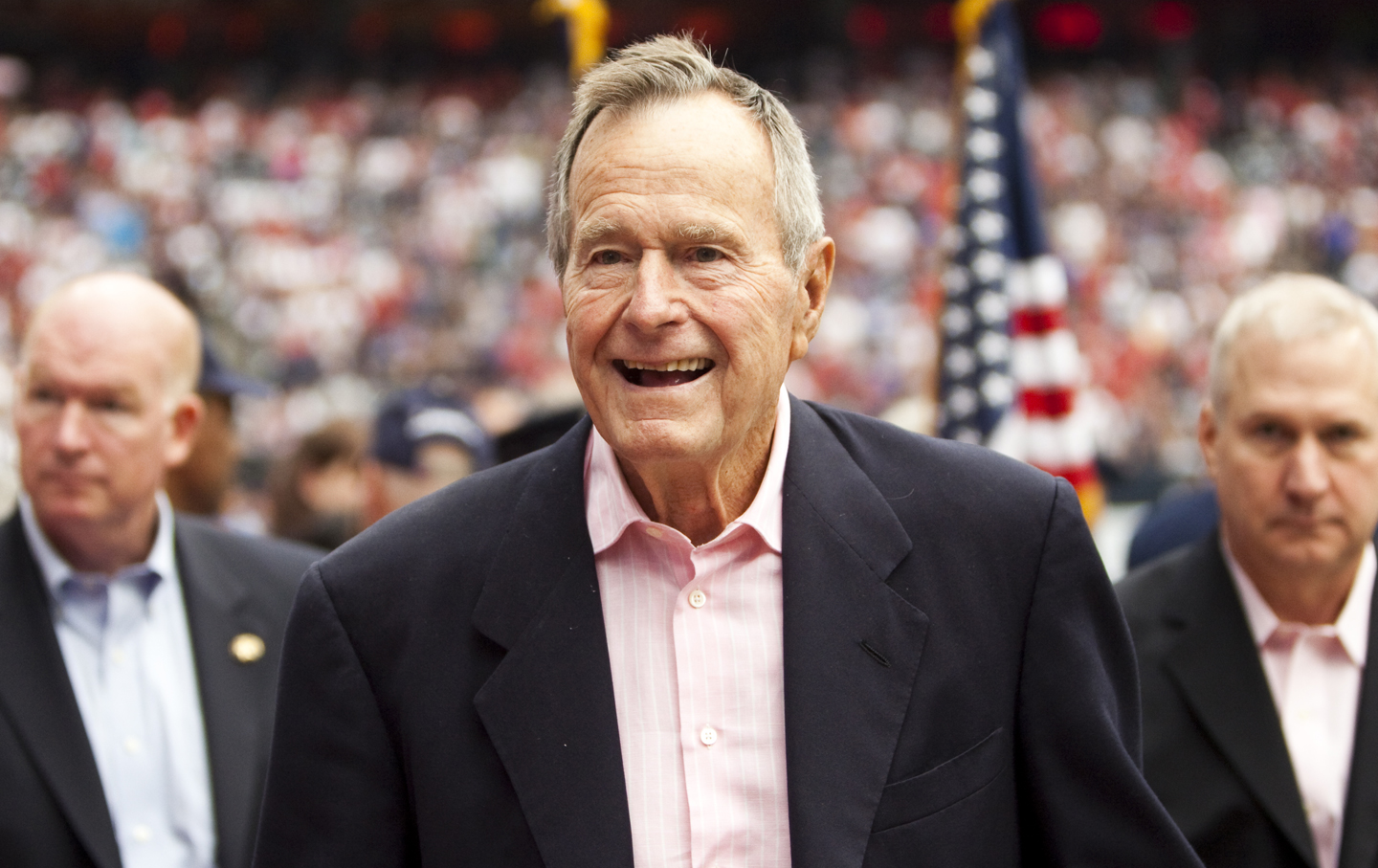 Harold Meyerson is executive editor of The American Prospect, and a regular contributor to the Los Angeles Times op-ed page. This interview has been edited and condensed.

Listen to Harold Meyerson on the Start Making Sense podcast.

Jon Wiener: The standard approach with George H.W. Bush is to start with the good things he did, and then mention that there were a few exceptions. We’d like to do it the other way around. What would you say is the worst thing George Bush 41 did as president?

JM: I think the worst thing he did was nominating Clarence Thomas for the Supreme Court. We will continue to suffer from that for decades to come. The second-worst thing Bush did was his last act as president: pardoning many of the Iran/Contra conspirators, in order to block investigation of his own breaking the law. That points the way for Donald Trump to follow his example by pardoning the people who might testify against him. Could you review what that was about?

HM: In December 1992, less than a month before he was to leave office, Bush gave full pardons to six former Reagan administration officials, including former defense secretary Cap Weinberger, presidential assistant Elliot Abrams, and national security adviser Robert McFarland, all of whom had been indicted and/or convicted of criminal charges by the independent prosecutor, Lawrence Walsh.

JM: People may have forgotten about the Iran/Contra scandal. Reagan, as president, had armed the Contras, a right-wing army that was trying to overthrow the left-wing government of Nicaragua. Then Congress passed a law banning all American aid to the Contras. The Reagan people, nevertheless, continued to provide arms to the Contras in secret, using money they got from selling arms to the Iranians, who, by the way, had been holding Americans hostage. The news of this secret got out, and that’s why a special prosecutor was appointed—to prosecute the people who had broken the law prohibiting aid to the Contras.

HM: Of course, Reagan said he didn’t know anything about it. That might have stretched plausibility, but it was certainly characterologically plausible for Reagan. Not so for Bush. There were notes that Cap Weinberger had taken, which mentioned that Bush was involved in planning this, that he’d been in meetings about secret funding for the Contra war, and Lawrence Walsh also went after Bush’s private diary, which also had some material on his role. But by pardoning Weinberger, Bush prevented a trial in which evidence of his own involvement in the scheme to break the law would have come out.

JM: After that, the special prosecutor Lawrence Walsh angrily declared, “The Iran/Contra cover-up, which has continued for more than six years, has now been completed.” The parallels to Trump are a lot closer than people realize.

HM: Yes. There’s no question that Manafort has material on Trump, and on Don Junior, on what they knew about Russian subversion of the election. Trump could fire Mueller, but the consequences would probably be impeachment by the incoming Democratic House. Or he could pardon Manafort, and maybe some other folks, and see if he can skate by on that—following the example of Bush 41.

JM: The Gulf War is considered by Bush’s admirers to be one of his greatest accomplishments, because he won such a decisive victory but nevertheless did not invade Iraq or try to overthrow Saddam. He said if we did that, the United States would have to rule Iraq, and that would be a disaster. Of course, his son did exactly that, and it was a disaster. But the conduct of the war should be a big issue. The Gulf War began with 40 days of bombing, including targeting vital civilian infrastructure: electric grids, water-treatment plants, food processing facilities. The bombing killed something like 10,000 Iraqis, and the ground war killed another 10,000—several thousand of whom apparently were civilians. 293 Americans died. The fighting on the ground lasted only 100 hours. Bush announced afterwards that he had put an end to “the Vietnam Syndrome.” What exactly did that mean? Was it a good thing to put an end to “the Vietnam Syndrome”?

HM: “The Vietnam Syndrome” was a term devised by Republicans in the decades after the Vietnam War when the Democrats, especially Jimmy Carter, thought going to war to preserve the imperium was not such a hot idea. This was cast by the Republicans as essentially a lack of patriotism, a lack of sufficient nationalism. So here was a desert war against an army that could be defeated quickly—preceded by that bombing campaign. The military always says “precision bombing” is clean and neat. But usually the bombs themselves are rather indifferent, once they’re dropped, as to where they explode. They are never as clean and neat as the Air Force, in particular, says they are. But Bush ran for reelection declaring that he had ended the Vietnam Syndrome and restored American power and honor. And then his son fought more wars in the desert, and they’re still going on.

JM: Let us name some of the things Bush 41 is credited for doing that were good. He signed the Clean Air Act, and the Americans With Disabilities Act. This was at a time when the Democrats had complete control of the Senate and the House. The vote on the Americans With Disabilities Act in the Senate was 91 to 6. In the House it was 377 to 28. So it wasn’t exactly a courageous thing for Bush to sign the Americans with Disabilities Act. And of course, Bush was president during the fall of the Soviet Union, and he’s given credit for working with Gorbachev during those years to end the Cold War. That culminated in 1991, with signing the Strategic Arms Reduction Treaty with Russia. How much credit should Bush get for the end of the Cold War?

HM: The Soviet Union was on its last legs by the time Bush took office. The time gap between the day he was sworn in and the fall of the Berlin Wall was nine months—so I don’t think he gets much credit for that. I do think that some of the most mistaken policies of the US government with the former Soviet Union have to do with the expansion eastward of NATO, while excluding Russia. But that was Bill Clinton’s doing, not George H.W. Bush’s.

JM: George Bush did one other thing that really was good: when he ran in 1980 against Reagan in the Republican primaries, he called Reaganomics “Voodoo Economics.”

HM: Yes! Reagan was advocating supply-side economics, arguing that you could cut taxes hugely and you wouldn’t run a deficit, because the economy would become so massively productive that more taxes would flow in. That, of course, was proven false during the Reagan presidency, and every subsequent Republican presidency, including Bush’s son’s and the Trump presidency, with the tax cut a year ago. You lower taxes on the rich, and the deficit simply grows. And there’s no evidence that it really boosts the economy. So, “voodoo,” indeed.

JM: Even though Bush told the truth about Reaganomics, he nevertheless got the Republican vice-presidential nomination. How did that happen?

HM: At that point Reagan represented only a faction of the Republicans, not the entire party. Bush in 1980 was the most plausible representative of the more old-line Republicanism. And of course Bush agreed to go along with whatever Reagan said; that’s the precondition for being vice president. When Bush agreed to accept Reagan’s offer, it was the last gasp of old-line, center-right Republicanism—or, more accurately, its surrender.