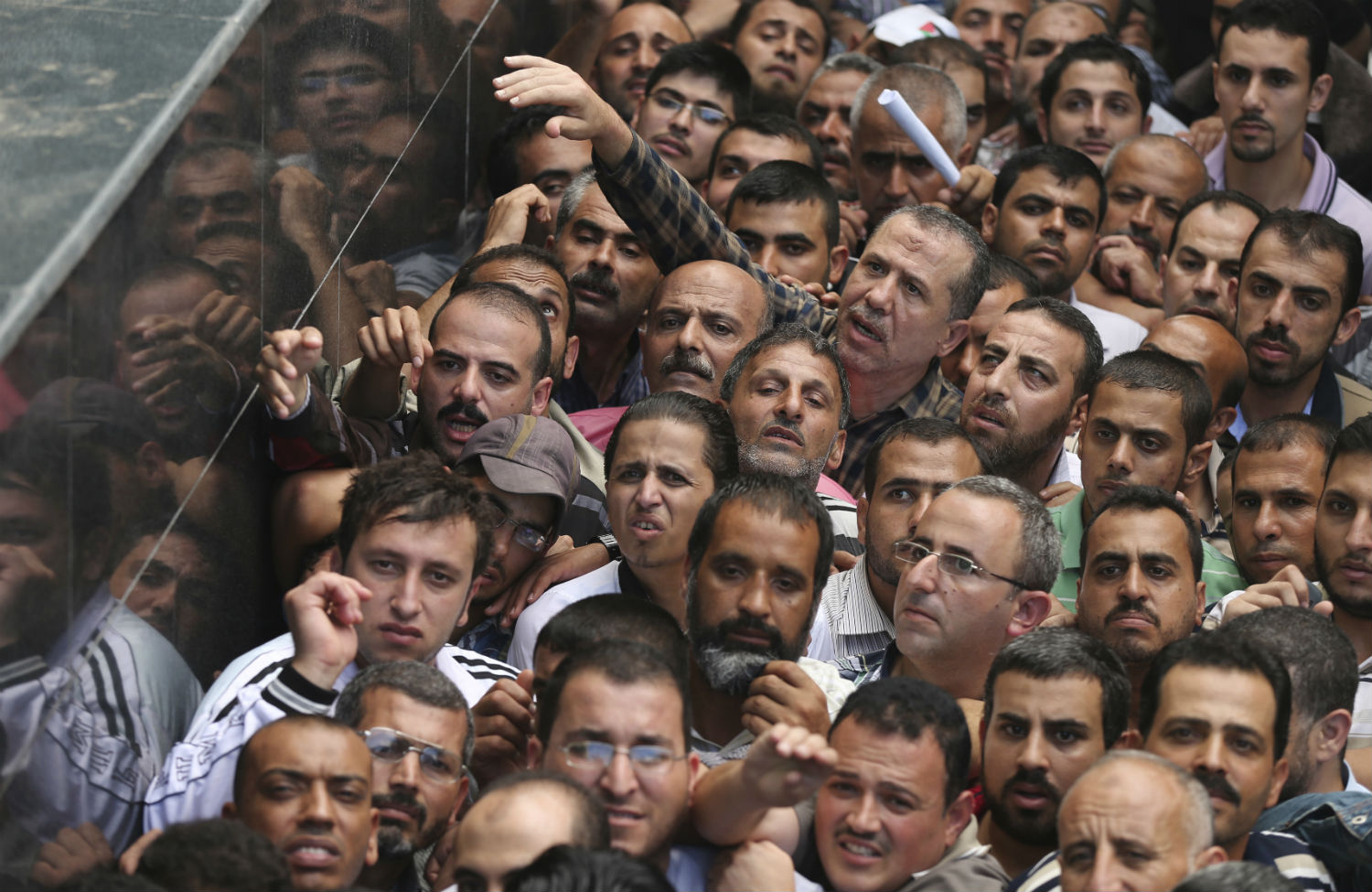 Palestinian civil servants wait to collect some payment after nearly a year without wages, outside a post office in Gaza City on October 29, 2014. (Reuters/Mohammed Salem)

For the past several weeks, a hostage situation has been unfolding in the Gaza Strip, but it’s not what you might expect: two competing political factions are warring for control of the bureaucracy. Government workers have for months been struggling in protest and paralysis as the Palestinian Authority (PA) and Hamas spar, upending several local agencies, including health, public works, women’s affairs and, perhaps ironically, labor.

For all the uncertainties surrounding the emergent PA-Hamas “unity” government, perhaps the most immediate political question for Gaza is, can they actually govern? The current labor tensions seem to reflect a tradition of Palestinian unions acting as an internecine factional battleground: sidelined local employees of the Hamas administration have gone without wages as the new unity government struggles to establish its operations and key services.

Last week, with labor unrest mounting, the PA announced that the public workers of Gaza (which has relatively high unionization rates) would remain at least nominally on the payroll. Meanwhile, Ma’an News Agency reported in Gaza City that former Hamas employees had started a hunger strike to demand unpaid salaries. Conflict has roiled over the question of backwages, as tens of thousands of Hamas workers—recruited after the faction took control of Gaza in 2007—have gone about seven months without income. As of this week, Israeli authorities continue withholding tax revenues, leaving workers to rely on partial stopgap payments.

Though communications out of Gaza are difficult, Mohammed Aruri, a former staffer of the Palestinian General Federation of Trade Unions who now works with the General Union of Palestinian Workers in Ramallah, tells The Nation via e-mail: “The political and economic situation in Gaza is complicated,” and “very hard to understand…especially after the 2006 election,” particularly from outside the Strip. When Hamas took control of the management of Gaza and hired its own civil servants, he explained, for many displaced former PA employees, “the government in Ramallah ordered them not to work with the Hamas government in Gaza and stay at home [while they] received their salaries every month from Ramallah.” But that labor limbo has again see-sawed.

Although some 24,000 employees received partial payments last October, no payment was issued to more than 15,000 workers in security-related jobs. At a sit-in outside Palestinian cabinet headquarters, Ma’an quoted union official Khalil al-Zayyan: “Our sit-in is peaceful and we do not want to destroy public property, but we will stay here until our members are recognized and their salaries paid…. We’ve had enough of the false promises. Either the government resigns or it takes all of Gaza’s responsibilities, like in the West Bank.”

The rising tensions have reportedly coincided with crackdowns on Fatah. Last weekend “several ATMs were smashed in several branches of the Bank of Palestine—intended as a warning to the PA lest it seek to pay the salaries of PA employees without paying the workers of the Hamas government as well,” according to The Times of Israel.

But Israel seems to be helping to solve that problem, perversely, by withholding some $127 million in tax revenues from the PA government in retaliation for President Mahmoud Abbas’s bid to join the International Criminal Court. While the West Bank was the primary target of the payment freeze, The Times of Israel reports that Gaza has also been affected. The combination of political chaos and economic paralysis, and recently, disputes over control of key border checkpoints have worsened humanitarian conditions. The population still suffers from chronic poverty, and the region remains heavily damaged from last year’s Israeli strikes.

Meanwhile, intractable political rifts between Hamas and Fatah have impeded both the postwar rebuilding of Gaza as well as the basic functions of the skeletal government. Earlier this month, The Jerusalem Post quoted Hamas spokesperson Mushir al-Masri as saying, “The government has given up its responsibility toward the Gaza Strip, especially the public employees…. Every day, the government proves that it is a government of division and not national consensus.”

Ramallah too has simmered with social and labor conflict. Ahmed Nimer reports in The Electronic Intifada that since November, government worker protests, strikes and detentions have erupted, and Abbas has waged a legal battle against the Union of Public Employees. But Nimer argues that with traditional political loyalties eroding, the historical role of organized labor as a grassroots political force could again be rekindled:

Labor unions have a good opportunity to regain their solid connections with the Palestinian public by becoming more democratic and holding elections once every two years (not based on party affiliation)…. The unions also need to break any unnecessary relations with PA figures, starting with Abbas.

And looming over all the chaos is the Israeli occupation that, on top of years of systematic economic siege, now holds Gaza’s recovery hostage with the ongoing blockade.

For the humanitarian workers seeking to rebuild Gaza, the land is still broken and neglected by internal as well as international politics. Raji al-Surani, director of the Palestinian Centre for Human Rights, told Middle East Monitor, “Four months have passed since the Israeli war on Gaza, but nothing has changed regarding the reconstruction, which has become an impossible mission.” Only a tiny trickle of the funds pledged for Gaza’s reconstruction by international donors has materialized.

Following vicious storms that have aggravated the strip’s punishing winter conditions, the United Nations Relief and Works Agency in Gaza reported recently, “unless the current situation changes, funds for cash assistance will run out in February.”

Against this backdrop, the labor struggles of the former Hamas workers may seem relatively minor, but they reflect the cruel state of limbo surrounding the unity government. The most modest steps toward full statehood at the United Nations have prompted diplomatic backlash from Israel, while overarching economic deprivation have left the reconstruction government stillborn amid geopolitical turbulence. Gazan workers hobble on with a defiant but despairing pulse of protest—the constant, tragic syncopation of life under siege.