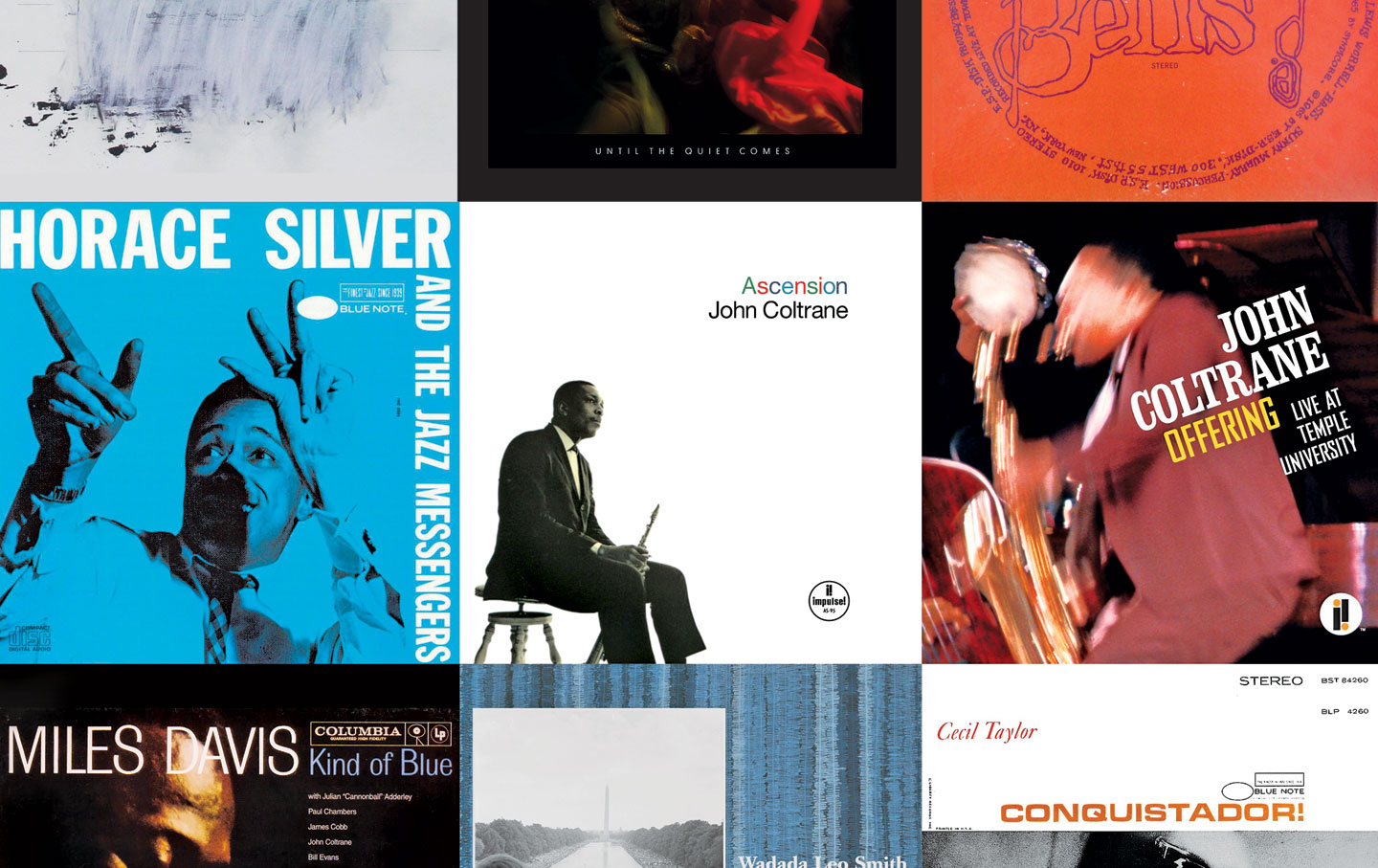 You’d think there was no possible universe in which a very white insurance executive and a very black musical renegade could find anything resembling common ground. And yet the inscrutable mysteries lurking beneath Wallace Stevens’s poem “The Man With the Blue Guitar” and the kind of anxious, ecstatic energy leaping from saxophonist Albert Ayler’s incantatory composition “Bells” converge at a single line in Stevens’s poem: “A tune beyond us, yet ourselves.”

Let’s pick up this conversation, arbitrarily, in a 1966 interview that Albert and his brother, trumpeter Donald Ayler, are having with Nat Hentoff, who asks how best to listen to the “free jazz” they’re playing. “One way not to,” Don says, “is to focus on the notes and stuff like that. Instead, try to move your imagination toward the sound. It’s a matter of following the sound.”

“You have to relate sound to sound inside the music,” Albert says. “I mean you have to try to listen to everything together.”

“Follow the sound,” Don repeats, “the pitches, the colors. You have to watch them move.”

“This music is good for the mind,” Albert continues. “It frees the mind. If you just listen, you find out more about yourself.”

Is Wallace Stevens nodding? Does he understand that these men with whom he might not otherwise have ever bothered to make eye contact on a street corner either in New York (where the Aylers blew their horns into infinite space) or in Hartford (where Stevens walked to work every day) are in tune with his blue-guitar player? I once dared to think such communion was possible, but I didn’t feel empowered to suggest it because political and cultural barriers wouldn’t let me. I dare to now. It’s a new century, after all.

Bear with me. Back when LPs ruled the earth, and I would play jazz music that was not in any way tethered to conventional rhythms or harmonies, there was always some older person—whether it was my father or one of his contemporaries—who, upon coming within earshot of an especially dissonant bar or two, would invoke variations of the following judgment: “Man, those cats sound… lost.”

For musicians to be deemed “lost,” their music didn’t necessarily have to be classified as “free jazz,” “avant-garde,” “far out” or simply “Outside.” In their collected correspondence, published in 2000 as Trading Twelves, Ralph Ellison and Albert Murray thought that the relatively accessible modernism of Miles Davis and Horace Silver in the late 1950s had strayed so far beyond the verities of the blues and swing that Ellison and Murray had embraced in their 20s that they, too, declared them “lost” souls. History being what we imagine it to be, I believed that such withering dismissals of progressive music would be worn away with time, as there would be more people like me—whether younger or older—who’d become so accustomed to such nontraditional sounds as to render the appellations “far out” and “avant-garde” as quaint as “gear” and “fab.” It’s nice to dream.

As far as some people are concerned, jazz isn’t just “lost”—it’s dead. Forget the distinctions between old and new, hot and cool, traditional and progressive, “Inside” and “Outside.” A Washington Post op-ed last August proclaimed that jazz was “boring…overrated…washed up.” This came days after The New Yorker put words into saxophonist emeritus Sonny Rollins’s mouth likening the sound of his instrument in full cry to that of “a scared pig.” The zeitgeist had worked itself into one of its intermittent exasperations with jazz, peering down at the music’s relatively low stature among its more lucrative peers as if to demand: “Are you still here?”

This revisionist spirit, part of what the New York Times jazz critic Nate Chinen would later deem jazz music’s “year of complaint,” may have emboldened Geoff Dyer—whose works include But Beautiful, a 1991 collection of evocative life stories of Duke Ellington, Charles Mingus and other jazz immortals—to write a blog post for The New York Review of Books titled “Catastrophic Coltrane,” through which he evaluates, from a mostly jaundiced point of view, Offering: Live at Temple University (Resonance), a recording of a November 1966 performance by John Coltrane’s second, more experimental quartet, which was re-released in September 2014. The piece represents a recent and prominent entry in an ongoing back and forth that may have started even before Coltrane’s death at 40, just eight months after the Temple appearance. The key question: whether the great tenor saxophonist’s bold forays into previously uncharted musical territory were propelling jazz music toward a transcendent state—or shoving it off a cliff.

Many passionate, often eloquent arguments have been made supporting one or the other contention. There’s no question on which side Dyer lands: he considers Coltrane to have arrived near life’s end at “a terminus, a brick wall, a dead end or, in the cosmic scheme of things, some kind of interstellar void.” In other words, as my dad’s friends might say, Trane was lost. A drag to consider, but given the recent evidence of what’s been characterized as “jazz bashing” in the mainstream media, the real issue at this point in the music’s history is whether anybody even cares whether free jazz, as Dyer wrote, “had run its course—come up against its limits—while the course was being run and the limits breached.”

I have had my own back and forth with the legacy of “free jazz,” and, much like the mainstream has done with the whole of jazz, I am sometimes ready to declare it a dead issue. Until, that is, I find myself once again caught up in, say, the sonic maelstrom of “Ascension,” Coltrane’s polyphonic orchestral abstraction, which will mark its half-century of existence sometime this year; or diving headfirst into one of Cecil Taylor’s extended, spontaneous piano solos, which sprawl and recombine into some new and unfamiliar shape with every encounter; or compelling my senses to engage once again with the keening, howling inventions of the ill-fated tenor saxophonist Albert Ayler, who—as with Coltrane, Taylor and other wild rovers of the Great Outside—sought to make something almost organic and living out of his determinedly unconventional improvisations.

Given that most of these innovations were forged in the 1960s, it’s tempting to think of them, as Dyer suggests, as belonging solely to their era, and thus with little to offer the twenty-first century. I’m not as sure of this as I used to be, especially given my recent encounters with artists and writers who still claim what was then considered “avant-garde” jazz as the foundation of their collective will to experiment, to extend their resources and push against their limits. Most of the painters I know generally prefer sounds that leap from the walls to goad their imaginations. Jackson Pollock, whose dripping-brush dynamics were often compared to the modernist sounds of bebop running concurrently along America’s post–World War II cutting edge, preferred listening to the mostly prewar jazz of Sidney Bechet and Fats Waller. Nevertheless, those sounds jumped and spiraled into his studio as willfully as the patterns he wrought into being. In so doing, he made art that resisted easy interpretation, indeed any interpretation whatsoever. It was the kind of art that to this day challenges people to find their own harmony, or connection, with its singular logic. For me, it has always been odd, at the very least, that white artists in most fields have often been encouraged (or, less generously, indulged) to stray outside the lines in pursuit of their own vision, while musicians of color have been scolded, even by their peers, for doing the same. Maybe this always happens in creative endeavors. I’m sure somebody somewhere declared Minimalism and Abstract Expressionism “dead ends.” Unless I’m wrong.Anyway, I can see forthcoming generations of “creatives” encountering avatars of progressive jazz music as “found objects” to make their own brushes and other implements move space and time.

There are reasons to believe such inspiration is already taking hold. Guitarist Marc Ribot has deployed some of the outer-limits compositions yielded by Coltrane and Ayler in a trio that includes Ayler’s onetime bassist Henry Grimes. Wadada Leo Smith, a key figure in the influentially experimental Association for the Advancement of Creative Musicians (AACM), was shortlisted for the 2013 Pulitzer Prize for his epic work for large ensemble, Ten Freedom Summers (Cuneiform), whose design and execution keep faith with the methodology of the 1960s avant-garde. And Offering, despite Dyer’s misgivings, surprised music-industry insiders by remaining in the upper reaches of the Billboard jazz charts for several weeks, despite being available only on LP and compact disc (and, as of this writing, still not available for digital download.)

I’m more reluctant than ever these days to daydream a world where people take the time necessary to work their way into music whose secrets aren’t easily accessible. But if you believe that nature abhors a vacuum (eventually), then perhaps you can imagine a time when the thick walls of white noise and sonic cheese processed for mass diversion will be breached by something that sounds, at first, like chaos, but then works its way into the zeitgeist. In more up-to-the-minute contexts, you have such intriguing players as Steven Ellison, a k a Flying Lotus, remolding rap, hip-hop, jazz fusion and electronic music into a form so distinctive and shape-shifting that all the old terminology, even “jazz” itself, may have to be tossed aside for a phrase or compound name we can’t yet conceive. What’s pried open by a Flying Lotus could make it more likely that future listeners won’t merely accessorize sound; they’ll follow it, watch it move, make something of their own out of the colors and the pitches. Just as the Ayler brothers once suggested.