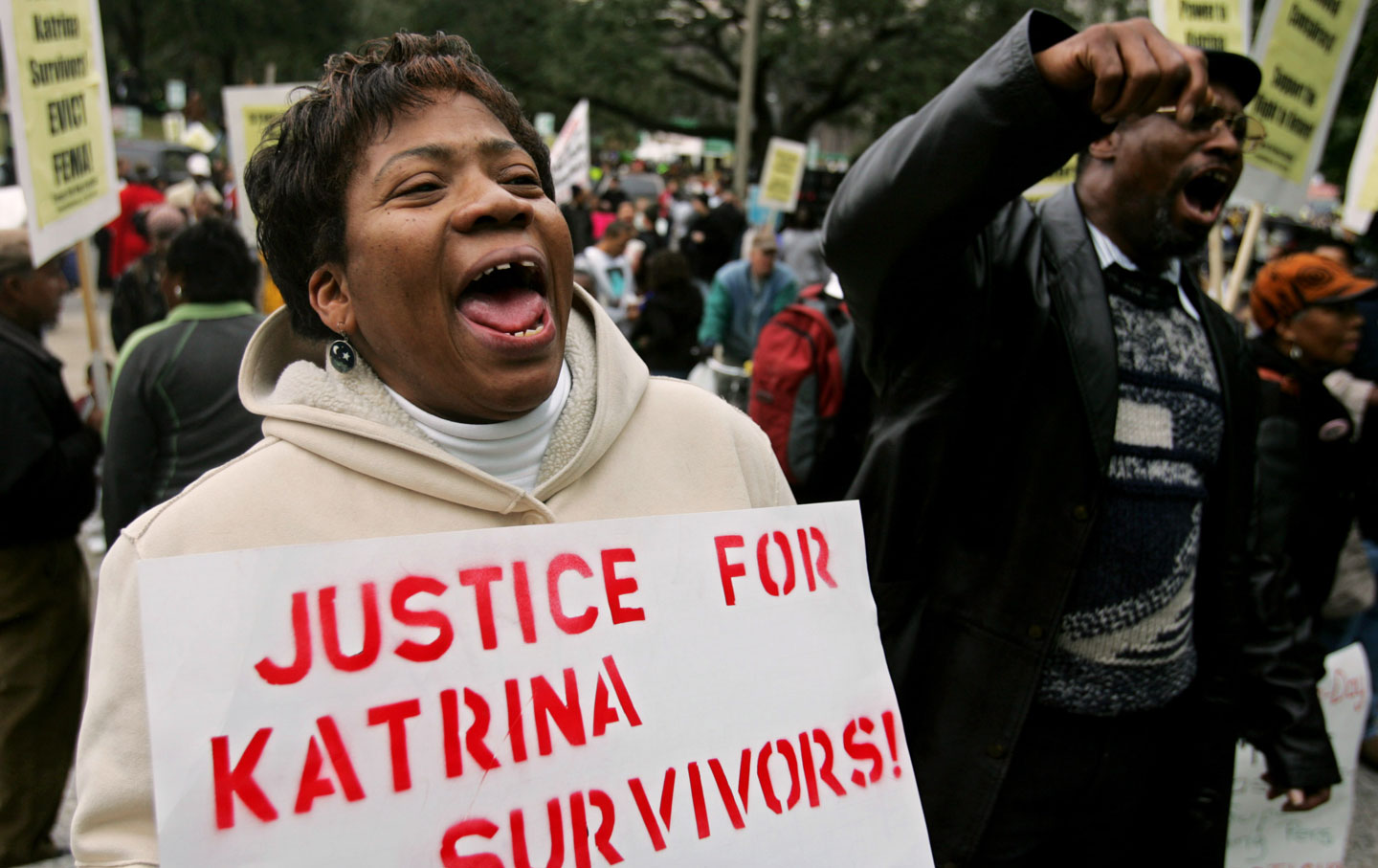 Black lives matter. America understands this as a movement rooted in the breathtaking sadness of George Zimmerman’s 2013 acquittal in the brutal murder of Trayvon Martin; necessitated by the enraging refusals to indict police officers in Ferguson and Staten Island for the murders of black men in 2014; and amplified by the unrelenting videos of black vulnerability and death out of South Carolina, Ohio, and Texas throughout 2015. These moments caused activists Alicia Garza, Patrisse Cullors, and Opal Tometi to assert that black lives matter.

But for us, James and Melissa, Black Lives Matter began as a public movement a decade ago, on August 29, 2005; and it was our neighbors, friends, beloveds, and coworkers who formed the first modern corps of Black Lives Matter activists. Before Trayvon Martin and Michael Brown and Eric Garner and Sandra Bland, it was more than 1,000 dead and hundreds of thousands of displaced New Orleanians who forced America to confront black vulnerability and to understand how that vulnerability indicts a system of national inequality.

The Rebirth of Black Rage

Why the Lower Ninth Ward Looks Like the Hurricane Just Hit

A Movement Lab in New Orleans

Hurricane Katrina did not hit New Orleans directly, and the city would have recovered swiftly from the extensive but manageable damage caused by winds and rain alone. But in the hours after the storm hit, several critical levees failed as powerful storm surges swept against decades of inadequate infrastructure. This part of the Katrina story is old and simple: By refusing to invest adequately in the public infrastructure needed to protect the most economically vulnerable and racially marginalized communities, the federal, state, and local governments left New Orleans open to massive devastation and long-term economic losses that affected every single neighborhood.

A decade later, we remain locked in maddening partisan battles as our public infrastructure crumbles beneath us—as if the consequences are irrelevant, or distant, or easily contained. ­Katrina already taught us that the fate of black lives cannot be separated from that of whole communities. Black lives matter.

Ten years ago, broken levees unleashed lake waters with frightening force and speed. In vulnerable neighborhoods, there was little warning and no means of escape. Stranded Americans waited for relief and rescue that did not come for days. The power went out, and the floodwaters rose. Food and water became scarce. The city’s shelters became centers of disease, hunger, and death. Despite aggressive and continuing coverage of the destruction on cable news, it seemed that the federal government refused to recognize what was happening in New Orleans. This part of the Katrina story cannot be forgotten: Video footage does not ensure justice.

Even though the disaster deepened before the nation’s eyes, black people were forced to publicly grapple with the question of whether they were American citizens worthy of fair treatment and swift help. The slow and militaristic response to black suffering was as visible in the Lower Ninth Ward in 2005 as it would be nine years later in Ferguson.

Tens of thousands of African-American men, women, and children were labeled “refugees,” as if the disaster had occurred not on American soil but in a distant country. The same media reported that armed, roving gangs of young black males opportunistically profited from the tragedy. Reports suggested that these men were stealing from electronics from stores, raping women trapped in evacuation centers, and trying to assassinate relief workers. Later evidence revealed that these reports were untrue. In fact, young black men were organizing to assist other survivors who were unable to find supplies: the elderly, the sick, and people with children. This narrative returned in the shaming disgust with which Ferguson protesters were met when their grief and anger exploded in the aftermath of Michael Brown’s death. Black lives matter.

On the Danziger Bridge, Americans encountered the deadly consequences wrought by police who frame unarmed black people in need of assistance as threats in need of elimination. It’s a lesson we learned again with Jonathan Ferrell, Renisha McBride, Miriam Carey. Black lives matter.

In the months following the disaster, black New Orleanians displaced by the storm demanded the right to remain enfranchised, to choose their own elected officials, and to set the course of their own destiny. Municipal elections arrived less than nine months after the storm. Many New Orleanians were still living in contingent, transient, and economically insecure circumstances, but they refused to allow that reality to keep them from the polls. They demanded absentee ballots, satellite voting locations, and extended voting hours. Long before the Supreme Court gutted the Voting Rights Act, unleashed a wave of suppressive laws, and forced activists to redouble their discursive and organizing efforts to protect the vote, the people of New Orleans showed that black votes matter.

Ten years ago, the people of New Orleans were faced, dramatically and intensely, with many of the economic, political, social, and racial issues that have come to define our national reality during this decade: unpredictable educational circumstances, devastated housing stock, sharply limited economic opportunities, acts of violent policing, and a system of criminal injustice.

Much recovery has come about since the flood. New Orleans has been ground zero for some of the nation’s most innovative, community-led examples of problem-solving. Asset-based thinking is inherent to the city. During these years, community-based nonprofit organizations, political activists, residents, students, and elders have created strategies for urban farming, housing and hospital construction, education reform (albeit controversial), neighborhood renewal, and artistic revitalization.

However, 10 years later, it takes no more than a 10-minute tour of the Lower Ninth Ward or a short drive through New Orleans East to know that success remains elusive. In these neighborhoods, homes remain unrebuilt. Crime is rampant. Businesses continue vacant. The public-education system is hard to navigate.

After Katrina, investment has been centered in New Orleans’s upper-income white neighborhoods. Ten years later, black residents protest the lack of focus and meaningful funds devoted to their neighborhoods. The moment that America’s collective attention shifted away from the Lower Ninth Ward, so did investment. If no one is looking, do lives matter?