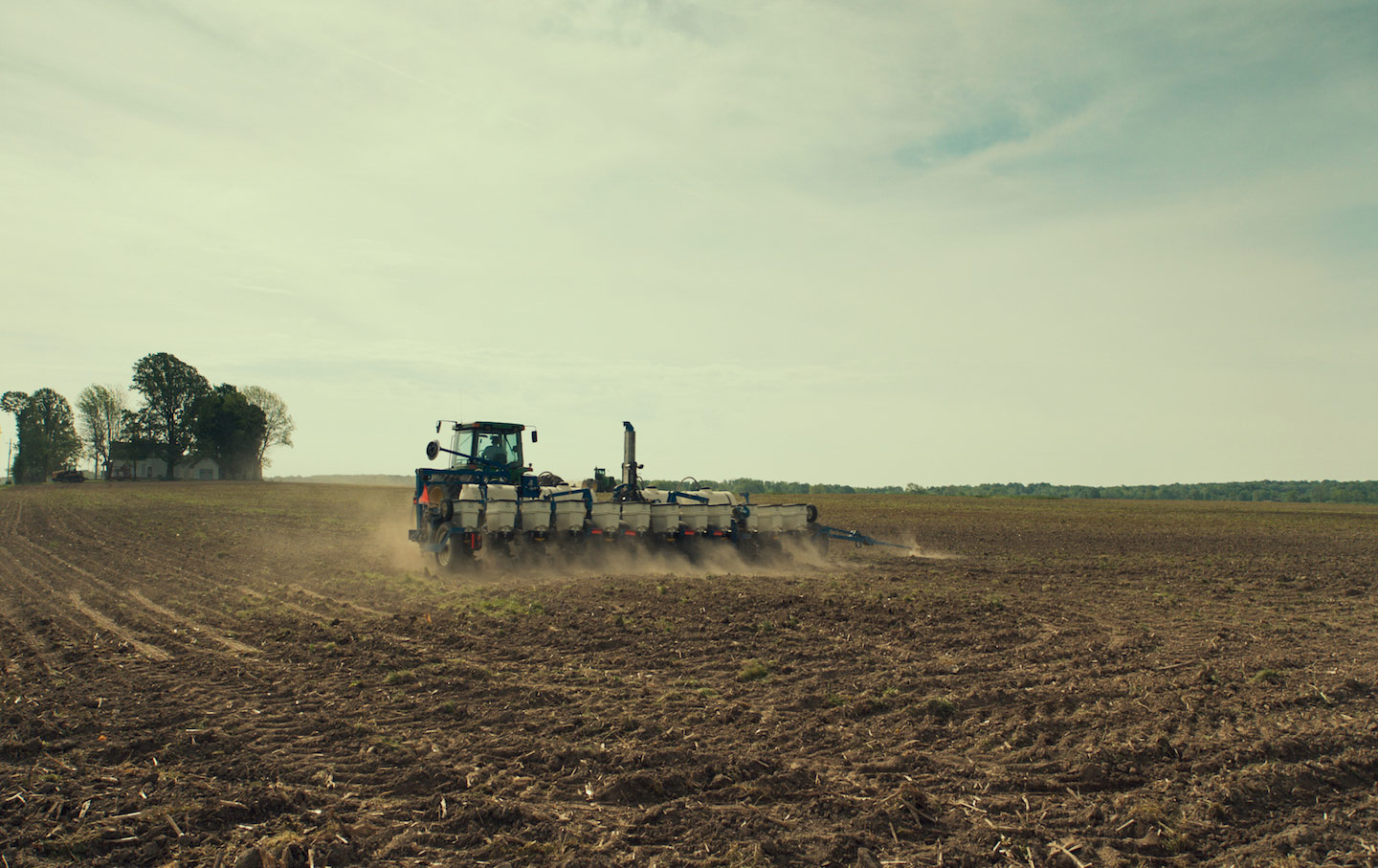 The farming town of Monrovia sits a bit southwest of center in the state of Indiana. The population, which numbers slightly more than 1,000, was reported in the most recent Census as 97 percent white. Median household income hovers around $64,000 a year; about 15 percent of residents live below the poverty line. Four houses of worship, all Protestant, dot the map. In 2016, 77 percent of the vote in Monrovia’s county went to Donald Trump.

You can learn none of this from Frederick Wiseman’s new documentary, Monrovia, Indiana, which played at the recent New York Film Festival and began its US theatrical rollout at New York City’s Film Forum. As in his previous 41 nonfiction films, Wiseman forbids himself the use of voice-overs, interviews, archival images, printed texts, soundtrack music, or any other means of imposing external information or an explicit argument on his subject matter. His job, as he sees it, is to give you something more enduring than data or opinions, and yet also more fragile and elusive: an idea, constructed of normally occurring sights and sounds, that you intuit as the whole of Monrovia.

Consider the carefully crafted illusion that the town’s main drag is compact enough to fit into a few establishing shots, and that Wiseman’s camera, sooner or later, pokes into its full array of storefronts. A little reflection will tell you that these forays aren’t truly exhaustive, but they feel close enough after you’ve passed some time with the people in Hot Rod’s Barber Shop, Café on the Corner, Dawg House Pizza, Slingers Tattoo, Red Barrel Liquors, Class Act Hair Studio, and even a place you’re not supposed to be able to penetrate, the Masonic Lodge, visited on a day when aproned officials honored a fellow adept for his 50 years of service. By the time Wiseman has added to this ensemble two or three meetings of the local planning commission, a baby shower at the Monrovia Festival Community Building, and a kitchen shift at the Main Street Bar and Grill, you have the feeling that you could get around the town center on your own, and would find most of the faces familiar.

As usual, though, Wiseman is less interested in faces than in the work that people do. He devotes whole sequences to processes like spraying a broad expanse of crops, encouraging a writhing crowd of pigs onto a transport, dumping truckloads of rattling kernels into an elevator, grinding and packaging meat at the supermarket, and cropping the tail of an anesthetized dog. I could go on—but then, I’d risk making it sound as though Wiseman flips through Monrovia as if he were thumbing through a catalog. Yes, he likes those successions of wordless, fixed-camera images, neatly arranged one after the other in discrete pops. But as scenes recur and a rhythm gets going, certain types of labor gain force as organizing principles in the film.

At the Movies With Stuart Klawans

I’ve already suggested one such theme: the cycle of feeding people, from the fields and pens to the deep fryer and pizza box. A second theme is education. Among the earliest scenes are two that characterize the instruction in Monrovia’s high school: a classroom lecture about the town’s history of success in men’s basketball going back to the 1920s, delivered to students who seem to expect this material to be on a test, followed immediately by a rehearsal for a school performance, in which a beaming girls’ ensemble chirps “Ja-Da” while executing choreography suitable for Jane Russell and Marilyn Monroe.

The school teaches praiseworthy uses of the flesh, while the churches (in Wiseman’s third principal theme) preach the eternal superiority of the spirit. He begins the film (after an introductory montage of agricultural views) in a Bible-study class, where the pastor speaks of Jesus’s promise to comfort the faithful throughout lives that will unavoidably be filled with tribulation. This scene eventually proves to be one-half of a frame, the remainder of which comes at the end of the film, with a lengthy funeral sermon delivered by a different minister. This man urges the mourners to rejoice that a 74-year-old wife and mother has gone home to Jesus—after which Wiseman proceeds to the cemetery for the singing of “Amazing Grace” and the backhoeing of some of Monrovia’s rich soil into the grave.

Some viewers might draw their sharpest conclusions about Monrovia’s mind-set not from these preachers but from the members of the planning commission, who worry that a housing development on the outskirts of town might “change the demographic.” Others will read much into an episode set in a shop bluntly named Guns & Ordnance, where the salesmen and browsers bypass the more utilitarian firearms to admire assault rifles and a handgun that dwarfs Dirty Harry’s. But as much as any other figures, the two pastors complete the physical, social, and political idea that Wiseman so immaculately builds up in Monrovia, Indiana. Here is a place literally rooted in natural processes yet imagining itself beyond the reach of nature, filmed at a moment when people linger over their nostalgia (for the likes of “Ja-Da” or hoops glory) while being steeped in anxiety about encroachments of the new.

That’s my impression, anyway, based on what Wiseman makes of the town. How Monrovia would represent itself, I can’t say. A local newspaper or radio station might give the beginning of an answer, as well as an opening for a dialogue with the world beyond the cornfields; but despite his impulse to be complete, Wiseman doesn’t turn up any such thing on Main Street.

It would be unfair to Ruth Beckermann to praise her new film, The Waldheim Waltz, primarily for what it tells us about the Trump era. And yet, while addressing a subject distant in time and place from Monrovia, Indiana, she speaks even more directly to our current situation than Wiseman does, while taking a diametrically opposite approach to documentary.

Her theme is the care and management of historical amnesia, and the rage that can erupt when its comforts are disturbed. The year of the presidential election in Austria, Beckermann was among those who stirred up an inconvenient past. Acting as both observer and participant—roles that, to Wiseman, would be incompatible—she began bringing her clunky new video camera to demonstrations against the Christian democratic candidate, former UN secretary general Kurt Waldheim, after the magazine Profil and the World Jewish Congress produced solid evidence of his Nazi past, which he, in common with many other Austrians, had long pretended did not exist. At first, using a tactic favored by our own administration, Waldheim and his supporters dismissed the revelations as a mere rehash of old, long-disproved rumors. But as more and more documents emerged and election day approached, the tone changed, both in the candidate’s public statements and on the streets. Waldheim, the veteran diplomat and smiling front-runner, recast himself as the victim of a partisan smear campaign, or worse—a vengeful conspiracy against blameless Austria itself, conducted by certain well-funded alien forces who are known to control the media.

Somehow, Beckermann keeps her blood from boiling as she revisits these shameless lies. Perhaps she manages to stay cool because she’s so fascinated by her own recorded images from 1986—which are brusque, immediate, and rapid—and takes such lingering, morbid pleasure in the period news footage she’s amassed. There’s something almost droll about her voice-over narration and her choice of straight-ahead jazz to underscore it. As she explains toward the end of the film, she was proud that an early handful of anti-fascist activists grew into a large movement, and she gives a keenly intelligent account of how they almost won. But she also looks closely at the victorious Waldheim and his supporters, who seem a little too familiar for comfort. Behold the fury of good, Christian people upon being told that no, they weren’t innocent victims.