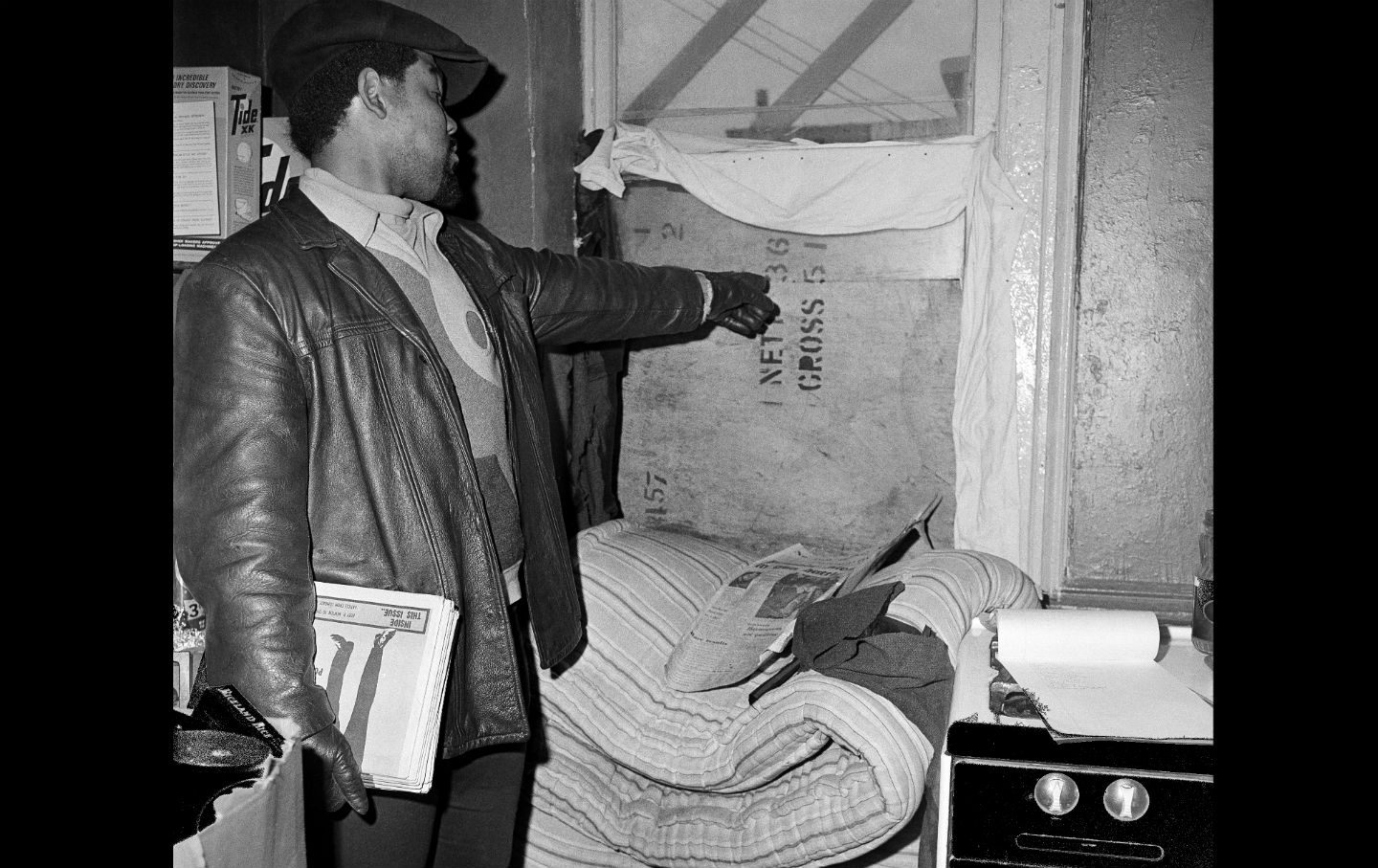 The scene at the Black Panthers headquarters in Chicago after a shootout in which two Panthers were killed in a police raid on December 4, 1969. (AP Photo/Edward Kitch)

December 4 marks the fortieth anniversary of the raid on a Black Panther apartment in which Chicago police shot and killed Fred Hampton in his bed. Hampton was the charismatic young chairman of the Chicago Black Panther Party, and under his leadership the party’s membership and influence had increased dramatically. The party had instituted a popular and expanding Breakfast for Children Program and a police accountability project. At the age of 21, Hampton was able to reach and influence gang members and welfare mothers as well as college and law students. Under his tutelage, the Panthers formed a coalition with Puerto Rican and white activists.

The response of the Chicago police and the ambitious Cook County state’s attorney, Edward Hanrahan, the likely political heir to then-Mayor Richard J. Daley, was to harass and arrest the Panthers as often as possible. The police even opened fire on Panther headquarters.

Six hours after the predawn raid on Hampton’s apartment, conducted by fourteen Chicago policemen armed with shotguns, handguns, a rifle and a .45-caliber submachine gun, Hanrahan went on TV to give the police version. He claimed the Panthers, and Hampton in particular, had opened fire on the police, who he said were innocently serving a search warrant for weapons, and that the Panthers continued firing despite several police attempts at a cease-fire.

I was the first person to interview the survivors in the police lockup, where Hampton’s crying and pregnant fiancée told me that after she was pulled from the room, police came in and fired two shots into Hampton and said, “He’s good and dead now.” The autopsy showed he had been shot twice in the head at point-blank range. My colleagues went to the raid scene, examined the bullet holes and found that the trajectory of all the bullets except one was from the direction of the police toward the Panthers. Later, an FBI firearms expert testified that more than eighty shots were fired by the police at the Panthers, with only one coming from a Panther. That one shot was fired in a vertical direction by a falling Mark Clark after he had been fatally wounded.

Two years after the murder, antiwar activists raided the FBI office in Media, Pennsylvania, and found and distributed documents that demonstrated that FBI chief J. Edgar Hoover was conducting a secret war on the left–the Counterintelligence Program, or Cointelpro. Its most aggressive and lethal tactics were used against the black movement, and the Panthers in particular. Cointelpro mandated FBI agents in cities with Panther chapters to “cripple,” “disrupt” and “destroy” the Panthers and their breakfast program and to prevent the rise of a “messiah” who could unify and electrify the black masses.

In 1969 I was a young, newly radicalized lawyer, one of the founders of a collective called the People’s Law Office, which represented the Panthers. After successfully defending the survivors of the raid against bogus criminal charges, we filed a civil rights suit against the police and the prosecutor, and later the FBI. My book The Assassination of Fred Hampton chronicles our long legal and political struggle to uncover the truth about the FBI’s role in the killing. After thirteen years of litigation, we proved that the raid was a Cointelpro operation. FBI agents in Chicago gave Hanrahan and the Chicago police a floor plan of Hampton’s apartment, which included the location of the bed where Hampton would be sleeping. They urged Hanrahan to conduct the raid and later took credit for it in internal documents. The FBI informant who provided the floor plan was given a bonus because his information was deemed to be of “tremendous value” to what one agent referred to as the “success” of the raid.

Noam Chomsky has called the murder of Fred Hampton “the gravest domestic crime of the Nixon Administration.” It is hard to imagine a more serious abuse by a government than the deliberate assassination of a citizen for his political beliefs and activity. But though we were finally able to reveal that Hampton’s death had been an assassination, it has never gotten the attention it deserves. The government’s cover-up and stonewalling basically worked.

Following Watergate and numerous revelations in the early 1970s about intelligence agencies run amok, the Senate’s Church Committee was formed to investigate such intelligence abuses as assassination plots and spying on US citizens [see Christopher Hayes, “The Secret Government,” September 14]. After documenting Cointelpro’s secret and illegal attacks on the left, the committee sought to guarantee FBI and CIA accountability by requiring Congressional oversight, including reporting of intelligence activities. The two strongest opponents of this oversight in the Ford administration were the chief of staff, Donald Rumsfeld, and Rumsfeld’s deputy, Dick Cheney. Together with Antonin Scalia, who was then head of the Justice Department’s Office of Legal Counsel, they persuaded Ford to veto legislation expanding the Freedom of Information Act to cover intelligence documents. Fortunately Congress overrode the veto.

Three decades later we are watching history repeat itself. In the 1960s the enemy was domestic dissent; today the enemy is international terrorism. In both cases, however, the right used fear to increase the powers of police and government agencies to operate in secret and with impunity. Cheney and Rumsfeld used 9/11 to beat back Church Committee restrictions on intelligence activities and reporting requirements. They encouraged intelligence agencies to spy on US citizens and to ignore international and US law forbidding torture and kidnapping.

In 1978 the Justice Department argued that FBI operatives were immune from liability for killing Hampton because they were carrying out government policy. An incredulous Judge Swygert asked the US Attorney if he thought they would be immune if they had given the police a gun and told them to murder Hampton. The government retreated from the “good German” defense at that point. In our own day, Attorney General Eric Holder has appointed a special prosecutor to look into the acts of torture carried out by CIA officers amid claims they are immune because they were carrying out government policy.

One lesson we should learn from the Hampton case is that although it’s important to put strong legal limitations on what police and intelligence agencies are permitted to do, that is not enough to prevent abuses. What’s required is accountability, in the form of criminal prosecution, not only for those who carry out criminal policies but for those who formulate them. Thus far Holder’s investigation is limited to those who carried out the policy of torture and may have exceeded its carefully hedged strictures. But the investigation we really need will look at the policy itself, which by all appearances was a criminal conspiracy by Cheney, Rumsfeld and a group of administration lawyers to subvert the Constitution.

Fred Hampton’s legacy should be our continued vigilance against government crimes and secrecy and our demand that officials be held responsible and criminally liable when they violate the law. This is about deterrence and equal justice, not revenge.