A poster of French President Emmanuel Macron is pictured behind a CGT union protester during a union meeting at a petrochemical factory where workers have been striking, December 14, 2019, in Martigues, southern France. (AP / Daniel Cole)

It’s probably not the sort of achievement he was looking for. But with his unpopular proposal to reform the country’s pension system, French President Emmanuel Macron has managed to do something that eluded his predecessors for nearly a decade: unite the country’s rival labor unions against the government.

Until now, left-leaning unions like the combative General Confederation of Labor (CGT) have been leading two days of nationwide protests and work stoppages, paired with rolling transit strikes that have won broad sympathy from the French population.

On Tuesday—the third day of national strikes—that will change: The General Democratic Confederation of Labor (CFDT) is joining in.

This is significant because, unlike the more radical CGT, this union has historically been moderate and keen to compromise, having backed other contentious reforms in the past two decades like measures to loosen labor laws and to rein in pension costs. It’s also the country’s biggest union. In short, its presence on the streets could spell trouble for Macron and what’s arguably his most ambitious reform yet. 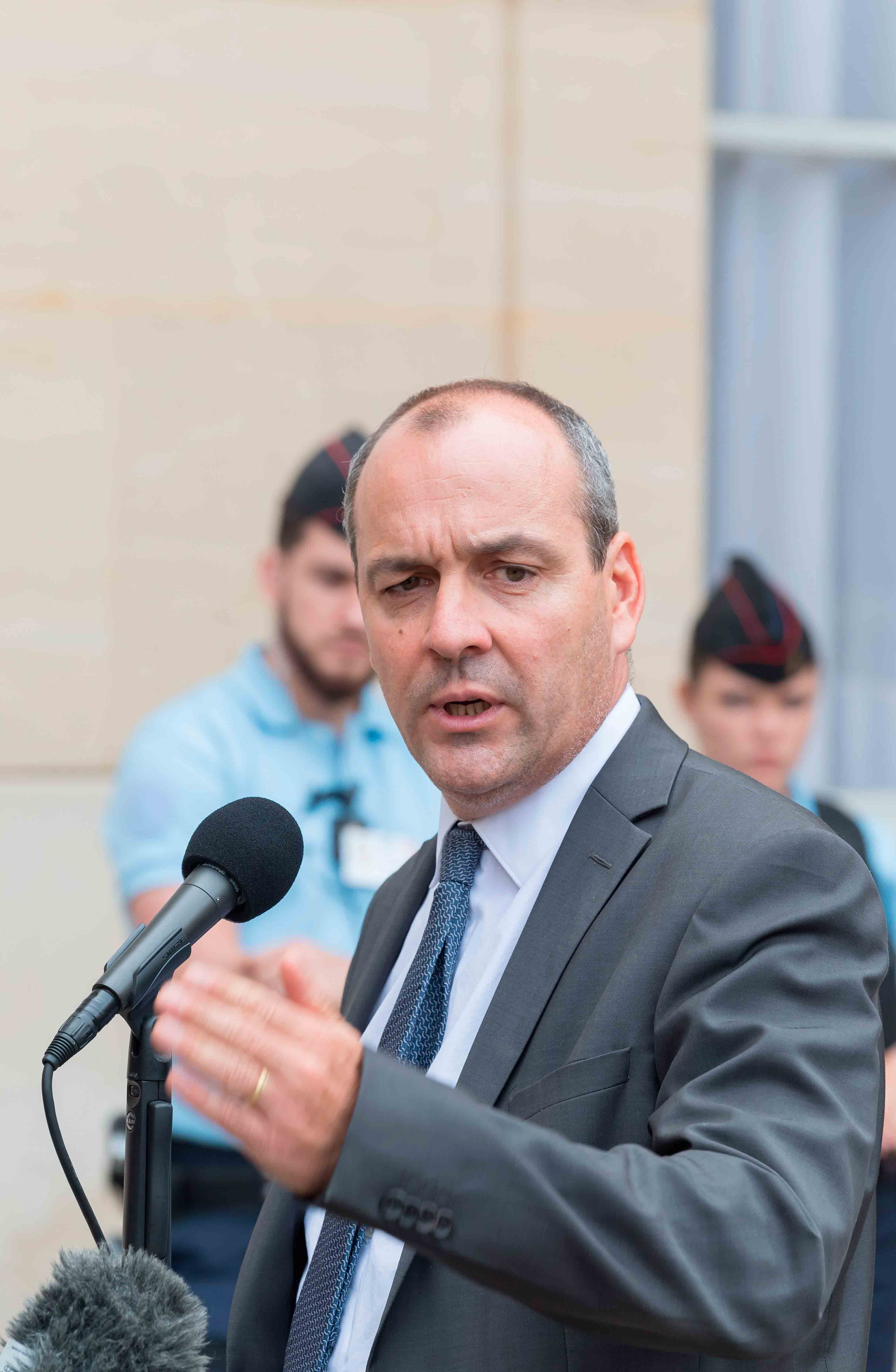 As the union’s president, Laurent Berger, explained, it wasn’t a tough decision. The government wants to effectively hike the retirement age, increasing the earliest possible age at which most workers can start collecting full pensions from 62 to 64.

“The government is trying to make people work longer,” Berger said in a recent phone interview. “That’s unfair. They’re arguing there’s a problem of financial balance [in the pension system], but there’s not really a problem of balance. There’s above all a problem of social justice.”

Still, unlike the CGT and others, the CFDT isn’t asking the government to toss out the entire reform. In fact, the union actually supports Macron’s professed goal of forging a so-called “universal system”: merging France’s 42 separate pension schemes into a single one. For months, the CFDT participated in negotiations with the government to that end, hoping its faith in dialogue and compromise would help produce a reform proposal to its liking. But as the 51-year-old labor leader and native of the western département of Loire-Atlantique explains, that goal also came with an important caveat.

Berger and his fellow CFDT leaders have been careful to distinguish between what they deem “systemic” measures to overhaul the system (which they do support) and “parametric” ones aimed at cutting costs (which they don’t). When the government unveiled a broad reform proposal earlier this year, then released further details last week, it appeared to include a mix of both. But while many expected the government to make some concessions to the strikers, it instead stood its ground on every key point.

“Since the government has proposed extending the retirement age for all workers, the CFDT is mobilizing to remove that part of the text, [but] not all of the reform,” Berger explains.

This critique isn’t particularly revolutionary. But given the confederation’s track record—and its strong preference for compromise over confrontation—it’s already having an outsize impact on the national conversation.

Over the past two decades, the CFDT stamp of approval has been pivotal to the fate of nearly every hotly contested reform, even when other unions like the CGT opposed them. That includes a sweeping retirement reform proposal in 1995 that was eventually withdrawn under protest; a separate retirement package in 2003; a national labor accord in 2013; reforms to overhaul collective bargaining under François Hollande in 2016; and finally, similar reforms to ease layoff procedures under Macron in 2017.

Its willingness to compromise has made the CFDT a highly valued interlocutor for governments of all political stripes; it’s also earned it predictable scorn from those further on the left. As one joke goes: “When slavery is reestablished, the CFDT will negotiate the length of the chains.”

Confederation leaders counter that they’re simply being pragmatic. They can also credibly claim that their vision appeals to French workers: There’s been a clear uptick in support in union elections over the last five years. (Under French law, both public- and private-sector employees organize polls to determine union representatives.) Berger, on his part, insists that the CFDT can, and does, mobilize when necessary—as in 2010, when it opposed President Nicolas Sarkozy’s ultimately successful effort to hike the retirement age from 60 to 62.

“The CFDT practices a form of trade unionism based on its capacity to advance a social critique of what’s happening in the workplace, and at the same time, to try to bring solutions and engage as much as possible in negotiation to put its proposals into place,” Berger said. “But when you’re not being listened to, trade unionism is also knowing how to react and to act through different means, notably mobilization and protest.”

He also has another critique of Macron’s governing style—one that’s shared not just by fellow union members but also by millions of ordinary French workers: that their concerns are being ignored.

“Since the start of [Macron’s] five-year term, in what they called Act I, there has been a lot of mistrust of what we call the ‘intermediary corps,’” Berger said, referring to interest groups that have historically negotiated with the French state like unions, local elected officials, and civil society broadly. “This July, they announced to us an Act II, saying, ‘We’re going to discuss things more, have more dialogue, and at the same time, we’ll take care of social needs.’ The first major reform that was done was unemployment insurance, in which purely budgetary logic won out, to degrade the rights of the unemployed.”

This squares with Macron’s broader plan of reining in what he considers a bloated public sector. The unemployment reform took effect last month, tightening eligibility rules on access to joblessness benefits, increasing state oversight of those on the rolls, and, in some cases, reducing aid itself.

“On retirement, it’s a bit different, because we can’t say there wasn’t dialogue,” Berger continues. “But we had the feeling that at the end, it’s always the same. One listens but one doesn’t understand the arguments. So decisions are taken that are kind of technocratic.”

Critics like social movement historian Danielle Tartakowsky, among others, have argued that Macron’s heavy-handed method has helped to fuel a broader sense of democratic malaise—one expressed perhaps most strongly by the Yellow Vests, the amorphous protest movement that erupted last November over a since-abandoned increase in the fuel tax.

“Today, France is a kind of paradoxical country. We can’t say the economic situation is all that terrible,” Berger said. “But we’re in a country that suffers from two very severe ills, I think. The first is the inability to imagine a new kind of development required by the environmental transition and technological revolution. The second ill is a very strong persistence of inequality, with a strong sense of resentment from the population with respect to certain people who they consider to be profiting [from the situation].”

As a trade unionist, Berger tends not to weigh in on electoral politics. However, in the most recent presidential election, he called on voters to reject the candidate of the far-right Marine Le Pen, and he still fears her party is far too great of a threat today.

“All of this creates a democratic climate that’s very degraded, where the worst temptation isn’t excluded. And the worst is the far right, the sort of populism that’s known in the United States.”

Unless Macron displays a willingness to listen to unions, negotiate in good faith, and concede to a retirement age of 62, not 64, before legislation is introduced in a cabinet meeting in late January, Berger says the CFDT is ready to strike again.

Then the CFDT will almost certainly be—yet again—in the streets alongside the rest of France’s labor unions. Its presence will make the movement all the harder for Macron to ignore.