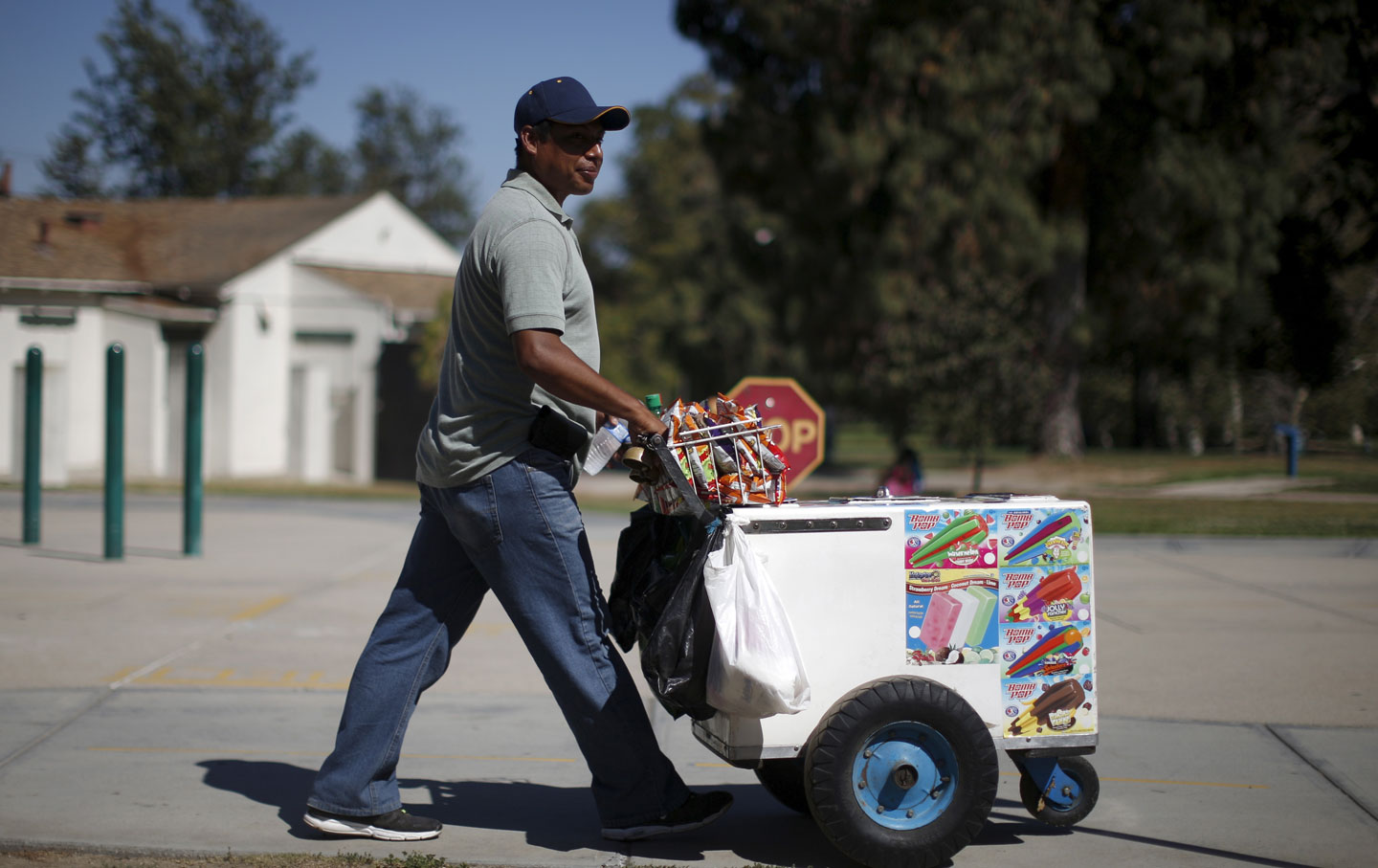 One of the strongest pillars of Los Angeles’s retail landscape isn’t a mom-and-pop storefront or a strip mall; in fact, it doesn’t even have a fixed address.

The city is peppered with about 50,000 mobile food vendors, Old World startups on wheels, catering to high- and low-brow tastes ranging from grandma’s tamales to fresh tropical fruits to rolling shaved ice pops. But this vital layer of the urban foodie firmament has long operated essentially outside the law. And now controversy is swirling over a proposal to provide a formal permitting scheme to legalize their “microbusinesses.”

Despite the fact that street hawkers have been plying their trade on the curb since long before many famed Downtown LA retailers set up shop, the city government often treats vendors as common criminals simply because they lack formal licenses.

The East Los Angeles Community Corporation (ELACC) has been pushing city lawmakers to set up a licensing program to offer vendors renewable permits (with fees ranging around $250), so they can operate in compliance with safety and commercial regulations, while supporting a classic cultural asset. But the debate is less about regulations than about the struggle for public space in a rapidly gentrifying city. Much of the opposition comes from the business community that supports the quasi-privatization of public space through Business Improvement Districts, which allow private corporations to subsidize localized municipal services (to spruce up, say, a select row of hipster boutiques). Larger retailers and developers see these sidewalk vendors—largely poor, immigrant or people of color—as a blight on their upscale commercial fiefdoms.

“An 85 year-old member who is a fruit vendor... has been arrested eight times in the last year for the same thing...”

ELACC says many local vendors have been slapped with stiff fines, harassed, even threatened with deportation, or had their equipment seized—and patterns of overpolicing seem to follow insidious socioeconomic shifts.

“We see harassment of street vendors as a direct form of displacement,” especially in working-class areas “where gentrification has totally strangled that neighborhood,” says ELACC’s Director of Organizing’s Mike Dennis. Landlords evict poor folks, police push out peddlers: “we have an 85 year-old member who is a fruit vendor; she has been arrested eight times in the last year for the same thing…. how are we treating our society when we’re criminalizing folks like that?”

While the business lobby may attack vendors as “freeloaders” who allegedly flout taxes and insurance fees, advocates say economic elites fail to realize that everyone benefits from enabling people to work aboveground. Currently, Dennis counters, “because there’s no legal avenue for a vendor to become a legitimate business, why would a vendor invest in all these things? Just by formalizing the practice you’re already going to incentivize and increase, across the board, good actors in the vending industry.”

According to a report by ELACC and the think tank Economic Roundtable, street food vendors (who work on sidewalks; notably, higher-capital food trucks are allowed to operate under different permitting rules) directly produce about $100 million from mobile food sales annually, with an additional ripple effect of $160 million in economic activity across the county. Moreover, rather than competing to undercut brick-and-mortar shops, vendors actually don’t encroach on established business’s turf but, rather, support established businesses by purchasing supplies from retailers like discount shops and supermarkets. Vendors could potentially generate an estimated $33 million in taxes, not to mention subtler knock-on public benefits in enhancing street safety, by keeping otherwise desolate walkways peopled and lively.

LA’s ascendant vendor community can study the checkered history of the Big Apple’s modern-day pushcart wars. New York City street vendors can operate with legal permits but have run into political pushback from pro-business factions, territorial restrictions, and cops hassling vendors over “quality of life” transgressions, like a halal cart parked too close to a crosswalk. Meanwhile, coveted vendor permits have become urban gold, thanks to an arbitrary citywide cap on the number of licenses granted.

Currently, SVP argues that for “permits (originally purchased from the City for $200) are now sold upwards of $20,000.” This hyper-inflated black market leads to subterranean, quasi-legal rental arrangements, turning vending’s entrepreneurial ethos into something akin to pavement sharecropping. “The whole point is that vending is a form of self-employment,” says Sean Basinski of Street Vendor Project (SVP) of the Urban Justice Center (where the author once interned). “You shouldn’t have to be working for someone else. So the more restrictions you have, the more likely that you’re going to have vendors who are working for others.… That leads to exploitation.”

Brooklyn “green cart” food vendor Kele Nkhereanye testified for SVP about how such limits undermine honest livelihoods: “Small business owners: what part of that statement don’t you understand? People need to support their families. Vendors are not just individuals, they are part of a family.”

SVP has mobilized thousands of vendors to push the City Council to lift the permit cap. The hope is that the campaign for fairer city or state licensing policies could, like the movement for New York’s Domestic Workers Bill of Rights, become a platform for elevating the rights of a laboring class that is by definition marginal and freewheeling.

“In whatever city across the country, around the world,” Basinski says, “it’s always really the same people who are opposing street vendors…. The people that have the land and have the power, versus the vendors, who don’t.”

Back in LA, Dennis says ELACC’s proposed legislation would avoid capping permits but provides “a phase-in approach,” which gradually expands the number of permits while the city prepares the infrastructure to absorb thousands of newly formalized vending businesses.

The activists’ central goal is channeling the peddler movement’s momentum to “craft the law in a way that works for vendor community,” instead of for business elites. In the struggle to democratize the streets, Dennis says, “They’ve got money, we’ve got lots of people. It’s kind of a classic David and Goliath Battle.”