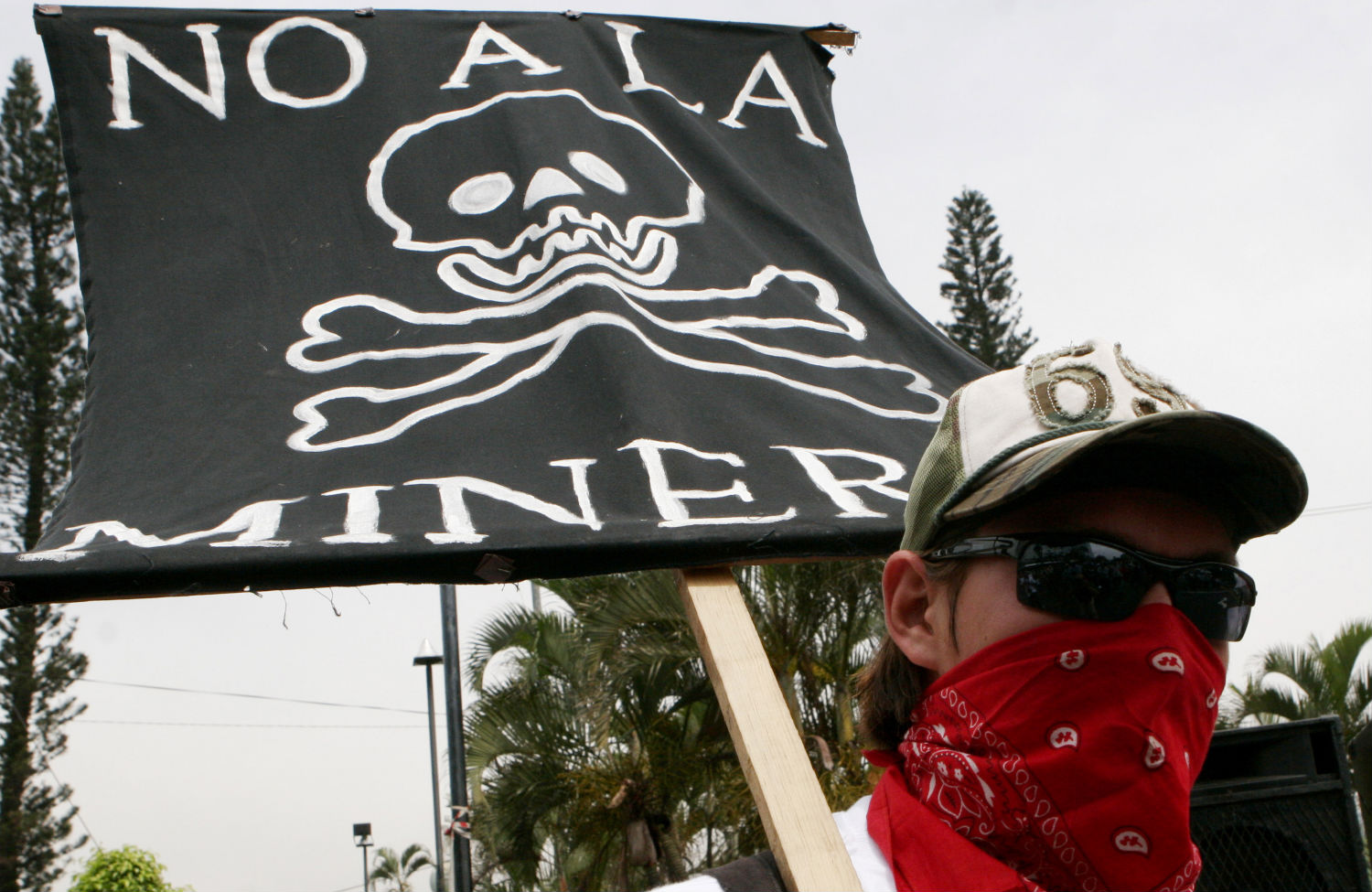 A protestor in El Salvador holds a sign reading "No to Mining." (AP/Luis Romero)

Nearly thirty years ago, the Wisconsin-based Commerce Group Corp. purchased a gold mine near the San Sebastian River in El Salvador and contaminated the water. Now, according to Lita Trejo, a native Salvadoran and school worker in Washington, DC, the once clear river is orange. The people who drink from the arsenic-polluted river, she says, are suffering from kidney failure and other diseases.

On September 15, Trejo and more than 200 protesters—including Salvadoran immigrants, Catholic priests, trade unionists and environmentalists—gathered in front of the World Bank to support El Salvador’s right to keep its largest river from suffering the same fate as the San Sebastian River. The event was co-sponsored by a raft of organizations, including the Institute for Policy Studies, Oxfam America, the AFL-CIO, the Teamsters, Friends of the Earth, the Sierra Club and the Council of Canadians, among others. Over the past few weeks, similar protests have taken place in El Salvador, Canada and Australia.

Mining for gold is not as neat and clean as the harmless panning many Americans learned about as kids. Speakers pointed out that gold-mining firms use the toxic chemical cyanide to separate gold from the surrounding rock, which then leaches into the water and the soil. And they use large quantities of water in the mining process—a major problem for El Salvador in particular, which has been described as “the most water-stressed country in Central America.” Confronted by a massive anti-mining movement in the country, three successive Salvadoran administrations have refused to approve new gold-mining operations.

That’s where the story should end. But it’s far from over.

An Australian-Canadian mining company, OceanaGold, is suing the Salvadoran government for refusing to grant it a gold-mining permit to its subsidiary, Pacific Rim. Manuel Pérez-Rocha, a researcher at the Institute for Policy Studies, explained the situation: “OceanaGold is demanding more than $300 million from El Salvador. They are saying, ‘If you do not let us operate in your country the way we want, you must pay us for the profits that you prevented us from making.’”

That sounds absurd, but it’s true: The company is claiming that under the Central American Free Trade Agreement, it has the right to sue the Salvadoran government for passing a law that threatens its bottom line.

El Salvador is now defending its decision to prevent OceanaGold/Pacific Rim from operating the El Dorado mine near the Lempa River before the International Center for Settlement of Investment Disputes, a little-known World Bank–based tribunal.

As several protesters pointed out, El Salvador’s decision is grounded in its need to protect its limited water supply. More than 90 percent of the surface water supply in El Salvador is already contaminated, and more than 50 percent of the country’s 6.3 million people depend on the Lempa River watershed for their water.

Francisco Ramirez, a Salvadoran who grew up in Cabañas, the department where the El Dorado mine would operate, spoke from experience about this reality. “If you look at the contaminated rivers in El Salvador, there are no fish left in the water. Not even toads, which are usually resistant to certain levels of contamination, can survive. We do not want that contamination to spread,” Ramirez proclaimed.

Ana Machado, a Salvadoran member of the immigrant rights group Casa de Maryland, another co-sponsor of the event, added: “The Lempa River is the main drinking source and an important source of livelihood for a majority of people in my country, including my family. They fish there. They clean their clothes there. If the company contaminates the river, Salvadoran life as we know it will end.”

Another Salvadorian immigrant and organizer with Casa de Virginia, Lindolfo Carballo, linked this lawsuit to larger struggles over sovereignty and immigrant rights. “This country created institutions to legally rob its Southern neighbor,” he said, referring to the “free-trade” provisions that permit corporations to sue governments over public safety regulations they don’t like. “And after they rob us of our natural resources, after they contaminate our water and land, they tell us that we are undocumented, that we are ‘illegals’ and that we have no right to be in this country. They have no right to throw us out of the United States if they are robbing us of the resources we need to survive in our own country,” he alleged.

John Cavanagh, director of the Institute for Policy Studies, explained the goal of the protest: “We are saying to OceanaGold: ‘Drop the suit. Go home.’ To the World Bank, we say: ‘Evict this unjust tribunal. It deepens poverty and stomps on democracy and basic rights.’” Cavanagh pledged to continue pressing the company to back down, promising that protesters would return to the World Bank in larger numbers when the tribunal makes its ruling in 2015.