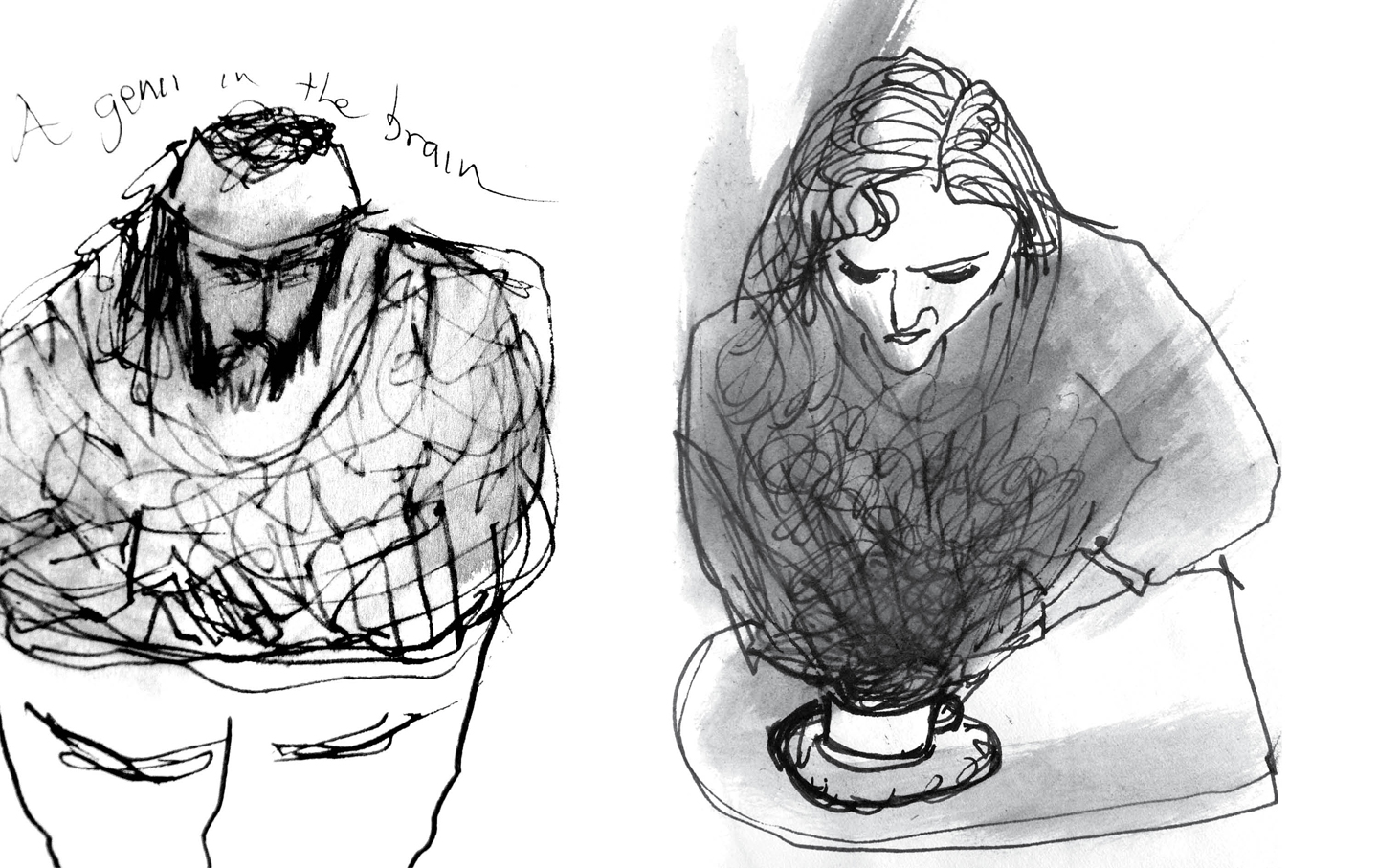 These excerpts are from his latest book, Writing Across the Landscape, to be published by Liveright, a division of W.W. Norton, this September.

If “God” still exists it’s here in the great brown cathedral of Rodez with its huge mass of Gothic glowering, its huge high square tower, its huge high dark interior at sunset, with the late brilliant light flooding through its high round rosé, the great Gothic vaults soaring inside, like any other old cathedral, yet with a gray presence in the high air, as if some Animator were actually still there—a medieval God it is, still existing, in the wrong century, cornered & refuged here, in all its illiterate, dark, tongue-tied peasant being. As if this huge dark fort of a cathedral were in reality a stone madhouse prison zoo of Dark Ages animals, lizards, reptiles, gargoyle primeval hounds & hyenas penned up here forever, still all screaming to burst out…. And those gargoyles outside…. roaring lions and ravens, like crying women extended from “windows”—flesh birds on them perched forever, very high up, and one great scream/roar heard from all these “blind maws,” medieval animals half-sprung out of high cages, croaking beast-women torsos sprung half-escaped from dungeon battlements in air, night zoo of Dark Ages trying to escape its eternal night, those speaking gargoyles, articulated primeval, blasted out of the Stone Dark, mute mocked-up humanity bleeding gray….

Just because some madman named Antonin Artaud once wrote some incomprehensible letters from here, I have to come & stop for the night….

There’s an eternal street fair going on in a great empty space at the bottom of the main boulevard, all the town out in the first dark of evening, wandering about among the lighted booths & barkers with their shooting galleries & spinning wheels of chance:

À Tous les Coups On Gagne
[A Winner Every Time]

Sign over a kids’ merry-go-round with little cars going around with children in them reaching for the big rag doll on a string the man in the booth keeps dangling on a rope over their heads.

as they go around, reaching & screaming for it, as the merry-go-round turns its valse triste of organ-grinder music in the night. While now, into the crowd in the center of the place, humps a hunchback, very well dressed, having jumped down from behind a barricade between two wagons in the dark at one side, and now hunching along in the crowd, surveying it with a proprietary air, which gives me the idea that He is the manager, owner and/or Animator of the whole show (so detached and dignified he is, as he hunches along, swinging this way and that)—le Patron of life itself directing all and calculating as he goes, having earlier planned out and planted the whole show, staking out the Fair Grounds like a great Trap & Lure, himself escaped from some gargoyle tower—bossu of the world, turning the whole show in his head like an organ-grinder turning a manivelle, a hump figure of Death himself, waiting & watching. For: “À Tous les Coups On Gagne.”

Along Michigan Boulevard, from the Water Tower to the Art Institute, there is a sense of tension in the air. A French woman at the desk of the Terra Museum of Art behind a sign saying “An American Revolution.” Two young black guys with bicycles leaning in a doorway, wearing plastic blazers emblazoned with “Cannonball Messenger Service.” The Tribune Tower, a vertically elongated Gothic cathedral with a quote from Ruskin incised on the floor of the lobby. A shoeshine boy sits on the sidewalk outside, his feet in the gutter.

The weather broke last night. For days, perhaps weeks, the heat had been building up, the drought stretched across the country, across the Midwest, enveloping Chicago in its desert embrace.

In the backyard of a brick house in Wellington Street, the palms in the leaden wind, under an overcast heavy with hydrofluorocarbons. One could hear the dry fronds of the palms rubbing together, like old spinsters rubbing their dry palms together. The wind blew but the clouds did not move. Sitting out on the wide wooden back porch, in the late evening, one could feel the pulse of the bone-dry city in the throbbing air conditioners and overhead fans and window ventilators that moved the parched air around and gave no relief. Now and then in the night, across the backyards of a dozen houses, one could hear a stray laugh or a fragment of a resigned word or two, lost voices under the moving palms. Once a burst of laughter fell out in the night but was immediately sucked up by the heavy night air like water sprinkled on a parched lawn.

It is now one in the morning, and the laughter is limp, as all falls into silence. At a bar across the backyard alley some male voices are trying to sing, and the heat smothers the sound before it can rise above the first floor. The palms move in the dry wind of the desert of Chicago.

On the way to the airport, the cab driver—an Iranian with a French accent in English—tells me, “Chicago is a killer city. The people are like beasts. They’re not humans, they don’t care about anything. I drive twelve hours a day, and the Mafia takes everything. You’re the first human I’ve talked to in a year.”

Chicago is a big silent tough woman in dark glasses sitting still in a rocking chair in a darkened house, waiting for the dawn.

Passed by the Bauhaus Museum and saw enshrined there the birthplace of soulless architecture…. And then the new Jewish historical museum, built by same architect who won one competition for the World Trade Center memorial in Manhattan. Designed to give you a feeling of disorientation, it does. Like a displaced Jew, you wander down twisting corridors with a red sign reading “Exit,” leading to cul-de-sacs or circular rooms.

There is an installation called “Falling Leaves,” which consists of heavy half-inch-thick iron disks, each the size and shape of a human head, with holes for eyes, ears, and mouth, but perfectly flat. About three layers of these are laid haphazard on top of each other on a cement floor of a very small rectangular room, and people are invited to walk over them. When I do, the heavy flat plates grind against each other with an iron thudding noise, as of feet in heavy storm boots.

Outside a large crow or raven, hidden somewhere in the high trees, cranks out his hoarse Nevermore!

In August Street where the galleries are scattered, we go into the Eigen Gallery to see the painting of Martin Eder. This exhibition is called his “Afterlife,” and the brochure says, “Drawn into the gallery space by music composed by the artist himself, we enter a completely different world.” But the place was silent as a morgue, like most all art galleries, and they said they weren’t playing the music because the birds outside in the trees were setting up such a racket.

And we passed on in the Auguststrasse, past a fat dog drinking beer out of a saucer in a café doorway. And farther on there were police guarding the door to a Jewish museum, and then one gallery recommended to us turned out to have totally blank walls in the ultimate postmodern statement.

And we sat down at an inside table in a big empty café and ordered white wine and beer and thought of our friends back home and thought how many roads must a man walk down and why are we on earth?

Meanwhile the trees outside were blowing in the wind sweeping in over the flatland from the North Sea. And there was no answer in it.

Feeling like one of the angels in Wim Wenders’s Wings of Desire, I’m sitting under the great dome in the Potsdamer Platz, having a Pilsner and watching the crowds pass by. I’m astounded by the sameness of all the faces, not all German, as if they were all poured from the same mold, the same template.

And I am as withdrawn as an angel observing life on earth, and how is it that I was so involved in it back then, good god, I am seeing myself walking by in another country, in another century, with the same expression of desires, never dreaming I might still take wing and fulfill them….