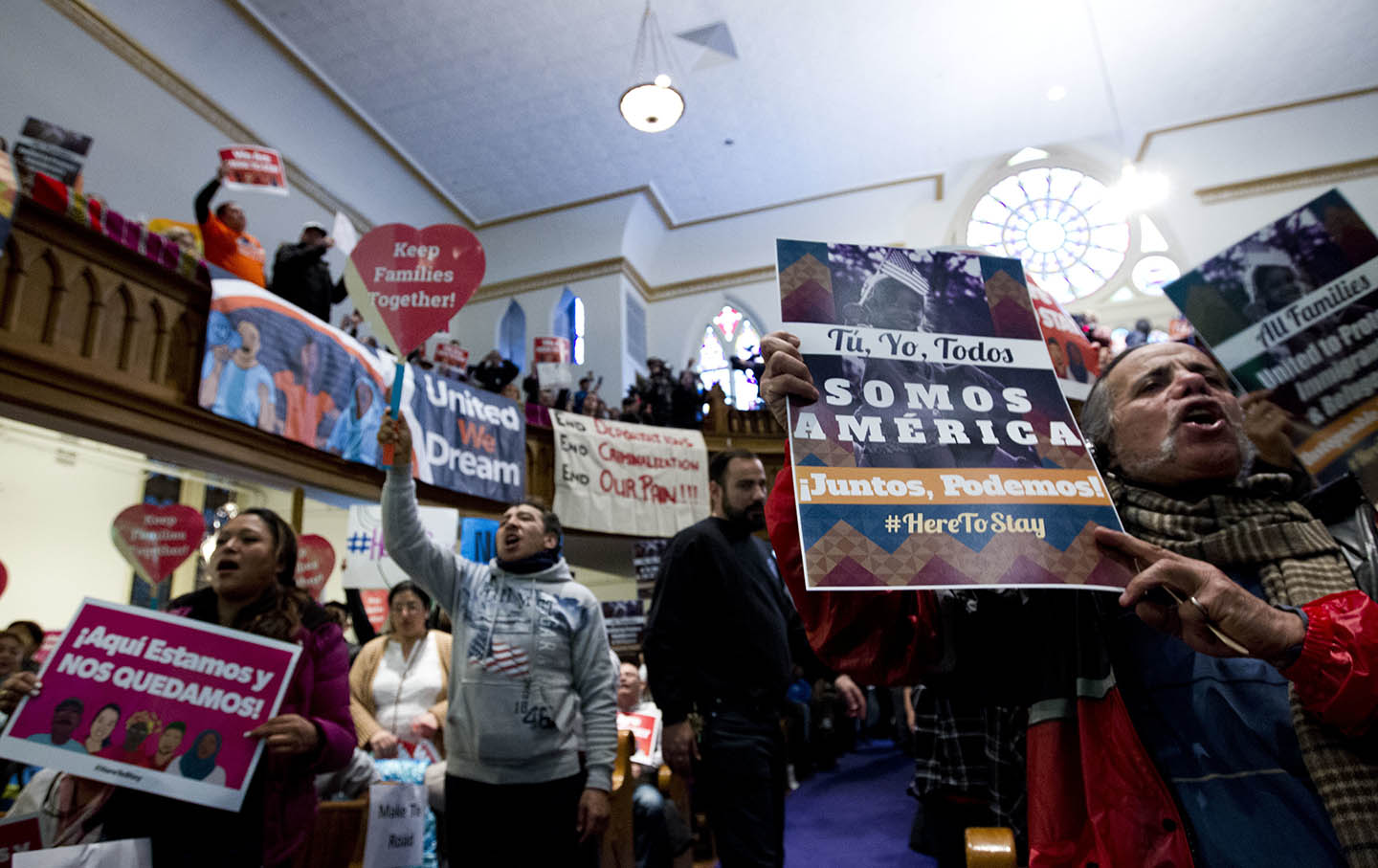 As soon as Donald Trump was sworn in as president on Friday, the clock started. Among his hundreds of campaign promises, one stuck out in particular to young immigrants: his pledge to immediately dismantle President Obama’s key deportation-deferral program, Deferred Action for Childhood Arrivals (DACA). Immigrants and the 752,000 undocumented young people who benefit from the initiative have been watching the minutes pass intently.1

“I have kind of two options. Option one: Be super scared because DACA can end any day,” Abril Gallardo, a 26-year-old who lives in Phoenix, told me on the eve of Trump’s inauguration. “Or,” she added, “the other option, which also includes all these things being taken away from me, but I use those to motivate me to fight.”2

I first met Gallardo in November, in the days leading up to and following the election. At the time, she spoke of her excitement at finally being able to transfer with her associate’s degree from Phoenix Community College to Arizona State University. She applied for DACA back when it was announced in 2012. The program grants two-year reprieves from deportation to young undocumented immigrants who clear a host of other hurdles (among them, criminal-background checks, longtime residence in the United States, and education requirements).3

In addition to temporary protection from deportation, DACA recipients are allowed work authorization and, depending on the rules in their states, eligibility for in-state tuition and even driver’s licenses. In her four years as a DACA recipient, Gallardo has taken full advantage of the program, moving forward with her education and her professional career. Today she’s a program director at a nonprofit called Living United for Change in Arizona, or LUCHA. Gallardo has also managed to save enough money for what she hoped would be a down payment on a home that she wants to buy for her parents.4

But DACA exists entirely at the discretion of the president, and can be dismantled without congressional approval. That precariousness, and Trump’s repeated campaign promise to undo it, have fueled a potent anxiety among young immigrants across the country and the people who love and depend on them.5

“Yeah, there is fear. But there is also strength and we know that no matter what happens we’re going to fight back.”

“All my different dreams, currently going to school, working, all of that that I have been building, being able to support my parents, being able to pay for my education, that stability can go away just like that,” Gallardo told me last week, just before the inauguration.6

Now, in Trump’s first full week as president, the fate of DACA is still up in the air. Immigrants and their advocates have been bracing daily for the very worst.7

DACA is the kind of short-term program that underlines the precariousness of executive actions, on one hand, and the perilousness of undocumented life on the other. With one stroke of a pen, the entire structure of Gallardo and hundreds of thousands of other people’s lives can be upended.8

How DACA Can End

Trump has several options for going about dismantling the program. The most dramatic would be to eliminate deferred action immediately, and with it, young people’s work authorization. However, says Tom Jawetz, vice president of immigration policy at the Center for American Progress, the Trump administration would be bound by some legal constraints that require that deferred-action recipients be given notification before their work permits are canceled.9

Jawetz cautions against seeing this option as a moderation, or as a more compassionate response than just canceling the program immediately. As it is, DACA recipients’ deferrals expire every single day—today, someone has to decide whether to spend $495 to apply to renew their status. United States Citizenship and Immigration Services, the agency that processes DACA applications, announced on Monday that it is still processing applications, and it will continue to do so directed otherwise by the new administration. But weighing whether to apply for a renewal, and pay the hefty application fee, becomes a new kind of personal gamble, since the Trump administration can rescind DACA at any time.

And for those who are first-time DACA hopefuls? Immigrant-advocacy groups have been generally discouraging those young people from applying. Attorneys and advocates I’ve spoken to say they have cautioned people to avoid handing over their personal information to the federal government if they haven’t already.

But as soon as DACA is eliminated, or every day that a DACA recipient goes without attempting to renew their status, life for hundreds of thousands of young people will change dramatically. “The consequences flow immediately,” says Kamal Essaheb, director of policy and advocacy at the National Immigration Law Center. Jobs, tuition, rent, car leases, all of those tethers to economic and personal stability are contingent on having DACA. Without it, they can disappear in an instant.11

Which brings Gallardo back to her own two choices: Just be “super scared,” or be scared and fight.12

“It took us a long time to fight for any kind of relief, and so I have hope that our community is going to use this time of uncertainty to come together for a shared purpose which is to protect ourselves and our families,” she said. “We’ve met with our [LUCHA] members, with other DACA-mented people, and yeah, there is fear. But there is also strength and we know that no matter what happens we’re going to continue to fight back.”13