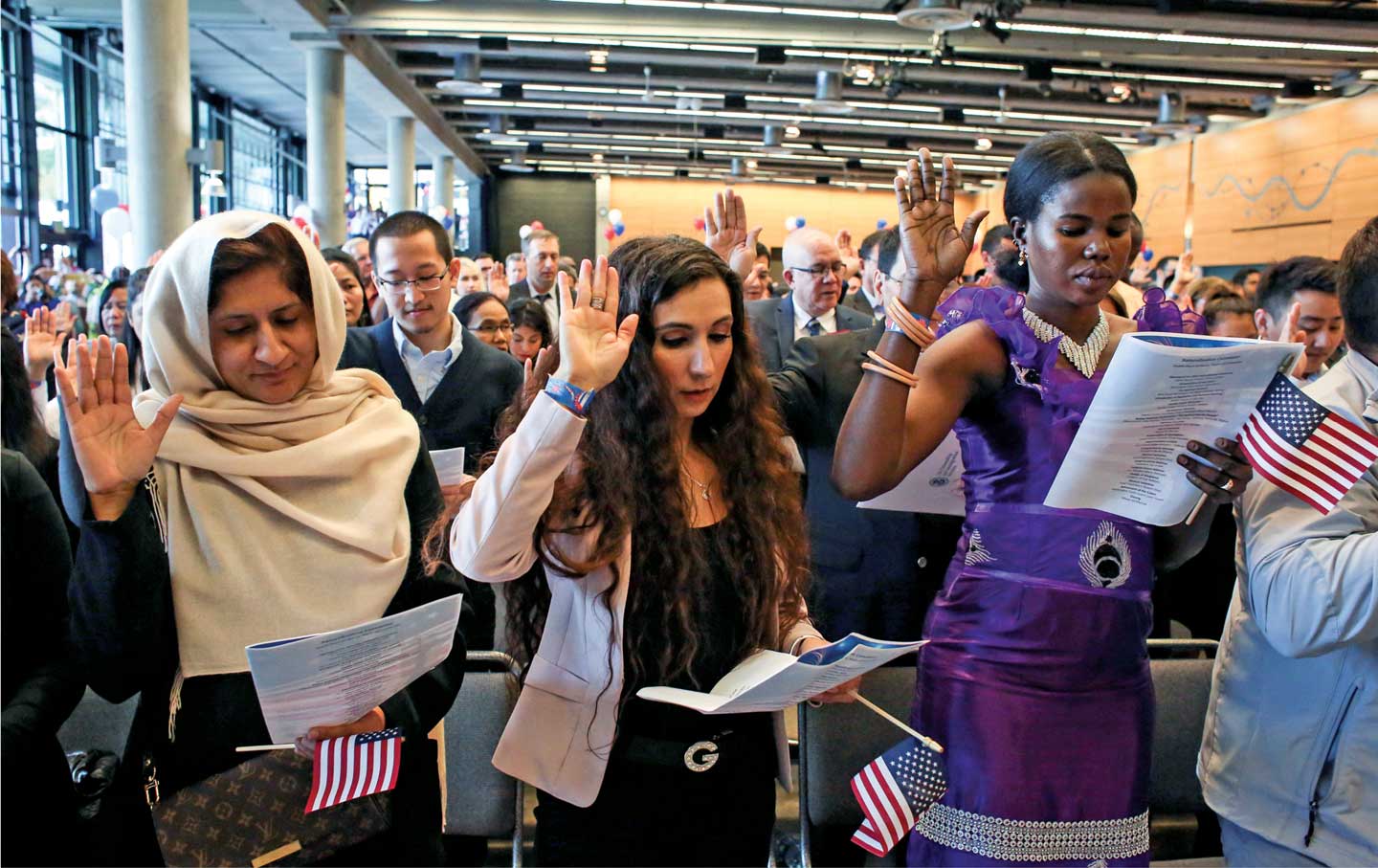 A new America: By 2065, nearly one in five US residents will have been born abroad, thanks to the 1965 immigration-reform law. (Reuters / David Ryder)

Donald Trump’s plans for undocumented immigrants  are what get all the headlines. There’s the wall, of course, and his promises to dismantle deportation-relief programs for undocumented young people, known as Dreamers. There are his proposals to detain and deport millions of noncitizens. But lurking behind the president-elect’s frightening promises to crack down on people who live in the United States without documentation is a much larger ambition: to slow the nation’s massive demographic change by curtailing our legal-immigration system as well.

“Within just a few years, immigration as a share of the national population is set to break all historical records,” Trump said during an immigration address in Phoenix this past August. The goal of his presidency, he continued, would be “to keep immigration levels measured by population share within historical norms.” He added that the country ought “to choose immigrants based on merit—merit, skill, and proficiency. Doesn’t that sound nice?”

The reference to “historical norms” was an unusually circumspect choice of words for the president-elect, but it’s a phrase that ought to worry many. What Trump’s hint meant was a return to an explicitly racist immigration system put in place in the 1920s.

David FitzGerald, a professor of sociology at the University of California at San Diego, described the thinking among early-20th-century US lawmakers, who were alarmed by the unprecedented waves of poorer, swarthier immigrants coming to the nation at the time. “There was a near-consensus among policy-makers of the day,” FitzGerald told me in a conversation this past summer, “that the more Northwestern European immigrants there were, the more they would improve the stock [of the US population]. And the more they were from Southern and Eastern Europe, [the more] they would degrade the stock and contribute to crime.”

So Congress created a system designed to curb immigration from Southern and Eastern Europe. Through a series of laws passed in the 1920s, lawmakers set annual quotas for immigrants from European nations. Using the 1890 Census as a benchmark, they capped the number of future immigrants from any given country at just 2 percent of the foreign-born population from that nation living in the United States in that year. Pegging the quotas to the 1890 Census was important, since it represented a time before the large flow of Southern and Eastern European immigrants to the United States commenced. Until the system was reformed in the 1960s, immigrants from the United Kingdom, Germany, and Ireland were entitled to fully 70 percent of the visas under this quota scheme, according to the Pew Research Center. What’s more, the Asian Exclusion Act of 1924 completely barred immigration from East and South Asia.

These policies had their intended effect: a precipitous drop in the nation’s foreign-born population, from a high of 14.8 percent in the 1890s to its lowest level on record—less than 5 percent—in 1970. These pre-1890/post-1920s levels are presumably the “historical norms” to which Trump was referring on the campaign trail. In short, he was pledging to halt the demographic trajectory that the country has been on since the 1970s. In 2013, 13 percent of the US population was foreign-born. Current projections suggest that by 2065, nearly one in five people in the United States will have been born outside the country.

Trump’s reference to “historical norms” is a phrase that ought to worry many.

But slowing this trend will require Trump to do more than simply deport people who are here without authorization: It will mean slashing the numbers of those who immigrate legally as well. As it stands, there are two main avenues by which people can apply to become US residents. The first is through family: reunifying with family members who are US citizens already living in the country. The second is through “merit”: by happening to have the education and skills deemed attractive by US employers. After the election, Trump again stressed which of the two groups he’d prefer the legal-immigration  system to serve.

“We’re going to have people coming in,” he told Time (in the same issue that anointed him “Person of the Year“), “but we’re also going to have them coming in based to a certain extent on merit.” That would mean inverting the current legal-immigration system. The immediate relatives of US citizens made up 41 percent of the roughly 1 million green cards issued in 2014. Those who came based on employer preferences? Just 15 percent of the total.

Trump’s perspective on immigration reform is troubling not solely because of its inherent elitism, or the way in which it reduces immigrants to widgets of labor, mere economic actors. It’s also one more plank in the far right’s direct attack on the civil-rights era.

Everything about Trump’s rhetoric and the cabinet he’s assembling suggests that the new administration plans to push an immigration-reform agenda in the Republican-led Congress that will mirror the far right’s approach to the Voting Rights Act. The 1965 Immigration and Nationality Act is the landmark law that replaced the discriminatory  national-origin quotas of the 1920s with a more egalitarian, family-focused system. There is widespread agreement that this law desperately needs an update: Its own system of allocating an equal number of visas to all countries has created an insurmountable backlog for those that account for the vast majority of applications, among other problems. Years’ worth of bipartisan efforts at reforming the system have failed. But Trump’s leading advisers and allies have articulated a “reform” agenda that would roll back, rather than update, the law.

When President Lyndon Johnson signed the Immigration and Nationality Act into law at the foot of the Statue of Liberty in October 1965, he acknowledged its racial-justice mission. The act “does repair a very deep and painful flaw in the fabric of American justice,” Johnson said. “It corrects a cruel and enduring wrong in the conduct of the American nation.”

And it is that correction, far more than the much-discussed presence of undocumented immigrants, that set the country’s enormous demographic shift in motion. White people will likely cease to be the majority in the United States by 2042.

Slowing demographic change by curbing legal immigration is one thing; stopping it is another.

So it’s perhaps not surprising that Trump has zeroed in on the legal-immigration system. His threat is more than just rhetoric: There already exists a clear blueprint for rolling back the 1965 law. Much of it comes from Senator Jeff Sessions, Trump’s pick for US attorney general, who has a long history as a hard-line anti-immigration zealot. In the last two decades, according to The Washington Post, Sessions has opposed nearly every immigration-reform bill that has included some pathway to citizenship for undocumented immigrants. But he’s also fought to curb avenues for legal immigration. In a 2015 op-ed for the Post, Sessions called the current system “the primary source of low-wage immigration into the United States.” He opened the piece with a wistful recollection of the era of the national-origin quota system, presenting it as smart policy-making that protected American workers.

Trump has also repeatedly consulted with Kris Kobach, Kansas’s secretary of state and an architect of Arizona’s notorious 2010 anti-immigration law, SB 1070. Kobach has also served as counsel for the legal arm of the Federation for American Immigration Reform, or FAIR, a far-right anti-immigration group that can be expected to play a prominent role in Trump’s Washington.

The federation released a position paper just after the election setting out its immigration-policy wish list for the new administration. In it, the group called on lawmakers to dramatically cut the numbers of those allowed to enter the country legally, decrying a system that admits “immigrants who already have family members in the country. We do not make immigration decisions based on whether or not an immigrant can contribute to our economy.” Lawmakers ought to “implement a  merit-based immigration system,” the paper urged.

Once a fringe group, the Federation for American Immigration Reform has now been brought into the mainstream of political discourse. The group has often been deemed too xenophobic and racist even for many conservatives. Its postelection position paper also included calls to end birthright citizenship, which was granted as part of the 14th Amendment; penalize sanctuary cities; expand the immigrant-detention system and aggressively prosecute the act of entering the country without papers as a felony; and further deputize local police to enforce immigration-law violations. Now its suggestions are likely moving straight to the president-elect’s ear via Kobach.

Slowing down demographic change by curbing legal immigration is one thing; stopping it is another. Already, more babies of color are being born in the United States than white babies. Between 2012 and 2016, 3.2 million US-born Latinos turned 18; these citizens make up the bulk of the Latino electorate’s growth. Fifty years after the immigration law that paved the way for the demographic remaking of the United States, it’s not likely that shutting down legal immigration will stop the changes now under way.