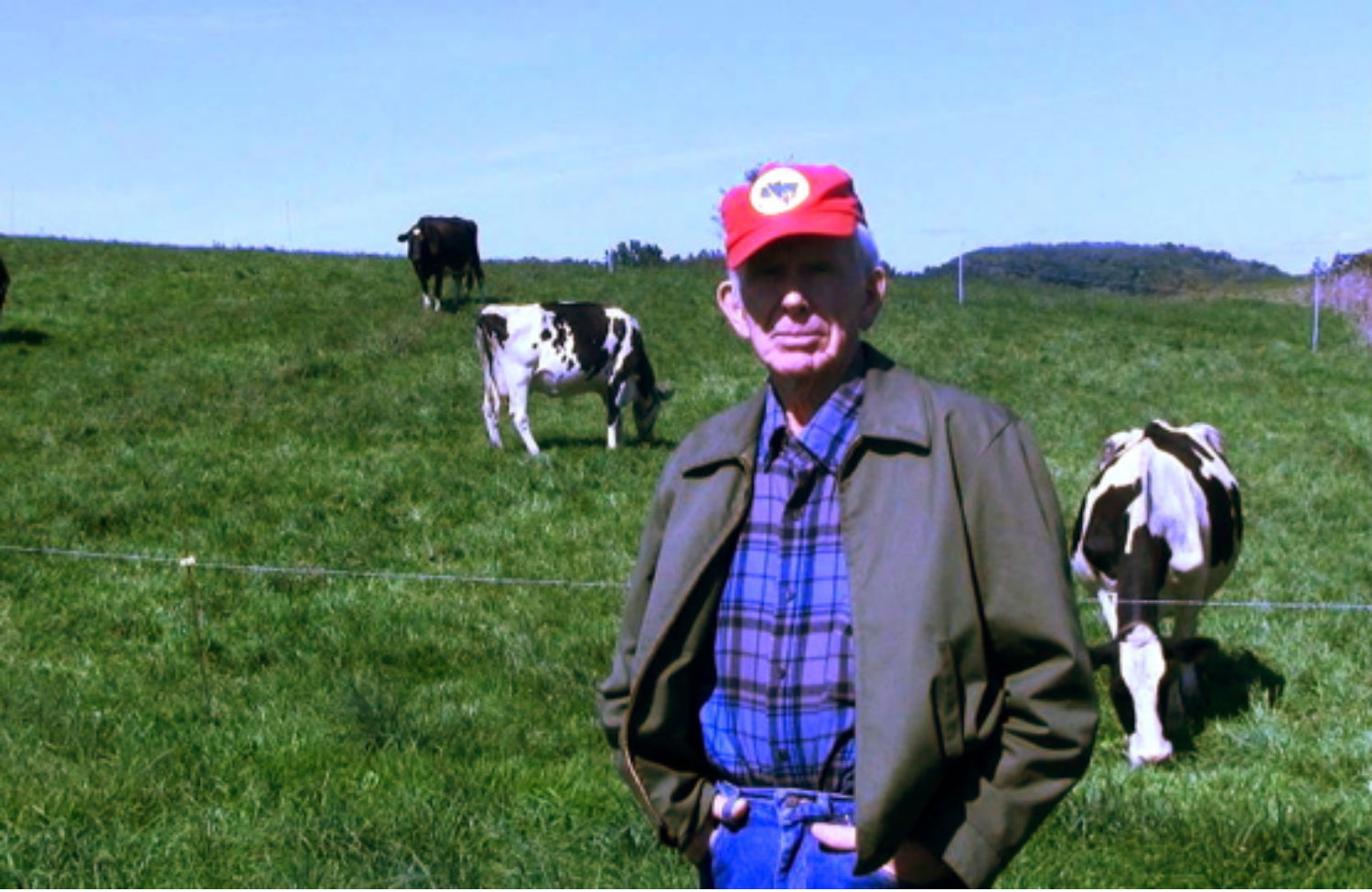 John Kinsman with his cows. (Photo courtesy of prwatch.org)

The roots of today’s outcry against corporate control of just about everything can be traced to the countryside—all the way back to the agrarian populist uprisings that reached their pinnacle with the 1896 presidential campaign of Nebraskan William Jennings Bryan. In the “Cross of Gold” speech that electrified the Democratic National Convention on that year, Bryan declared that “the farmer who goes forth in the morning and toils all day—who begins in the spring and toils all summer—and who by the application of brain and muscle to the natural resources of the country creates wealth, is as much a business man as the man who goes upon the board of trade and bets upon the price of grain.”

Rejecting the fantasy that prosperity extended from “the few financial magnates who in a backroom corner the money of the world,” Bryan dared to argue that the great economic, social and political contest “was a struggle between the idle holders of idle capital and the struggling masses who produce the wealth and pay the taxes of the country.”

The clarity that Bryan brought to the discourse was grounded in the frustration of farmers and small-town merchants with the unreasonable demands of distant bankers and grain processors. It transformed American politics, clearing the way for progressive reforms and a New Deal moment in which Franklin Roosevelt would announce: “We know now that government by organized money is just as dangerous as government by organized mob.”

As we celebrated the life and legacy of John Kinsman Saturday in the lovely Holy Family Catholic Church on a snow-covered hill above tiny La Valle, Wisconsin, I thought a good deal about Bryan and Roosevelt and the great populist farm activists of the past—folks like Mary Elizabeth Lease, the great Kansas orator who warned in the 1880s: “Wall Street owns the country. It is no longer a government of the people, by the people, and for the people, but a government of Wall Street, by Wall Street, and for Wall Street. The great common people of this country are slaves, and monopoly is the master.”

Lease was still alive, still agitating, when Kinsman was born in 1926 on his family’s farm near the village of Lime Ridge, Wisconsin. And Kinsman, with a remarkable yet seldom recognized circle of activists that included Nebraska’s Merle Hansen, built the bridge that carried the populist critique of corporate power through the twentieth century and into the twenty-first.

Kinsman was a dairy farmer—with a herd of thirty-six cows that he grazed on eighty acres—he always introduced himself as such. Yet he was, as well, an epic activist with deep roots in the Catholic social justice tradition and the civil rights movement of the 1960s. He was a pioneering advocate of the ideals that would come to underpin the international slow-food and food-sovereignty movements, and one of the great global organizers of popular resistance to the economic inequality and injustice that extends from corporate-defined and corporate-driven globalization.

Hailed by Grassroots International as “a pioneer of organic and sustainable farming in the United States and a tireless advocate for global food sovereignty,” Kinsman helped generations of younger activists come to understand the threat that corporate monopoly, oligarchy and plutocracy—words John regularly employed—posed to their health, their livelihoods and their democracy.

Kinsman’s knack for explaining in practical terms how corporate greed threatened sustainable farming, good food, safe water, small farms and small towns—as well as his passionate faith that the struggles of working farmers had to be linked with struggles for labor rights, civil rights and human rights—made him an international figure. As the founder and president of Family Farm Defenders, as the secretary of the National Family Farm Coalition, as a key leader of La Via Campesia, the largest international umbrella organization of farmers, fishers, foresters, hunters, gatherers and indigenous peoples, he was a definitional figure in the framing of a popular response to free-trade economics that placed profiteering above humanity.

It was not uncommon for John to milk cows in the morning and then get on a plane and fly to demonstrate with displaced farmers in Mexico, to sail with Greenpeace, to brief farmers from Mali about fights against Monsanto and the genetic modification of food, or to explain trade policies to the trade unions of Portugal. In 1999, when unions, environmental organizations and civil society campaigners organized in Seattle to block the World Trade Organization’s expansion of the corporate “free trade” model, Kinsman was at the center of everything that happened. Outside a McDonald’s in the city center, thousands of activists cheered as Kinsman and his friend José Bové, the French farm activist and former presidential candidate, distributed fresh cheese from real farms—and then explained how corporatization and globalization of food production threatened the livelihoods of the farmers who produced the safest, healthiest and most delicious food in the world.

That was classic Kinsman. Bringing farmers together with workers and human rights activists, making all the connections and explaining that what is at stake in any trade agreement is more than just money: It is the quality of the food we eat, the water we drink and the lives we aspire to. And he never stopped. In the last months of his life, John was organizing farmers to block the Trans-Pacific Partnership deal that President Obama and Republicans in Congress are now advancing. “As Congress considers the TPP, we need to express our opposition—not only to convince our elected officials that this will just lead to more economic chaos on top of the current crisis, but to also let our friends across the Pacific know that they are not alone in opposing free trade deals that are only designed to profit the 1 percent,” he explained. “Those of us in the 99 percent will end up losers if we do not…stop the TPP. We could ALL be winners if we worked together in constructive cooperation for a new global economic system based upon fair trade instead.”

That new system, with greater respect for democracy than corporate power, is still in the making. But when it comes to be, we would do well to remember the farmers like John Kinsman who planted the seeds and nurtured the dream.