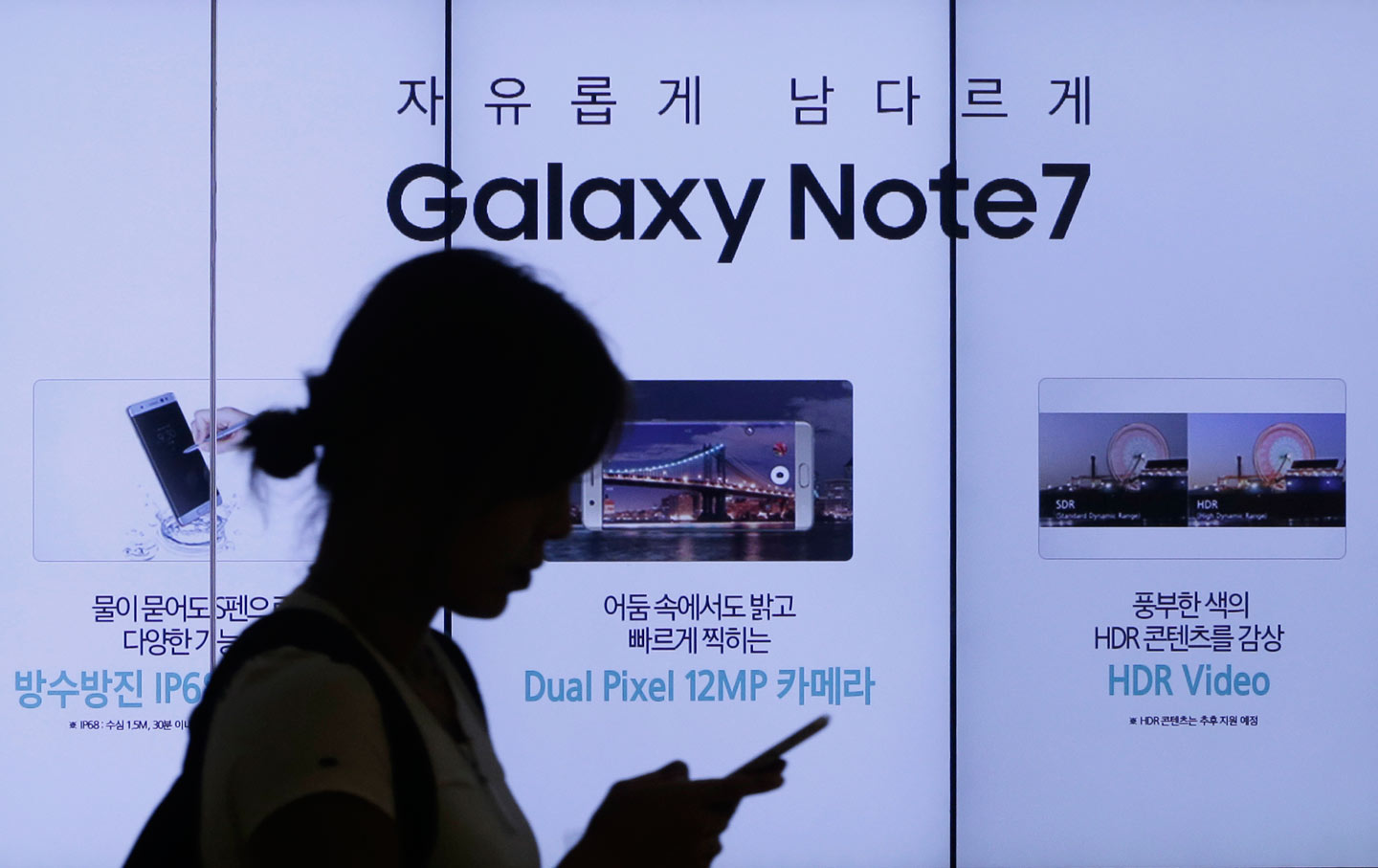 In recent weeks Samsung’s brand has undergone a series of spectacular and very public failures, with its flagship Galaxy Note 7 smartphone continuing to catch fire despite a global recall and failed effort to fix the problem. But exploding smartphones and botched safety recalls represent just the outer edge of the company’s crisis. The tech giant’s supply chain has long been fatally tainted, according to labor activists, churning out wage exploitation, chemical hazards, and mass labor abuses. So the retail quality-control issues fit perfectly with the wholesale degradation of workers’ quality of life.

Global unions are now mobilizing against Samsung’s “medieval” empire, which produces about one-fifth of South Korea’s export economy. Labor activists attribute many of the company’s alleged labor abuses to its strict no-union policy, which has been instrumental in suppressing wages and labor rights throughout its low-wage manufacturing network. Today, Samsung continues to be run in an idiosyncratically Korean form of business known as a “chaebol,” which operates as a family cartel that in turn controls the lives of tens of thousands of workers across four continents.

An analysis of the company’s supply chain, published by the International Trade Union Confederation (ITUC), examines labor practices at Samsung worksites in Brazil, Canada, China, Europe, India, Indonesia, Korea, Malaysia, Mexico, Philippines, Taiwan, Thailand, Vietnam, and the United States—all countries with vastly different economic structures, standards of living, and labor regulations—but all roped into Samsung’s multinational union-free zone, under a hyper-competitive manufacturing model of breakneck output and disposable gadgetry. Additionally, about 8,000 suppliers provide subcontracted labor under even more precarious conditions, according to the report, which leave workers with virtually no control over their wages, work schedules, or occupational safety conditions.

Economic “risk” is outsourced to subcontracted workforces in India and China, where labor is cheaper and corporate power is greased by rampant corruption.

One worker suicide documented in the report reveals the psychosocial alienation built into Samsung’s labor model:

On October 2013, Korean Metal Workers’ Union (KMWU) member Jong-Beom Choi, 32, self-immolated after being pushed into extreme hardship through targeted auditing…. The young leader committed suicide after being heaped with verbal abuse and insulting treatment just 100 days since the workers had formed a union. The KMWU said the same repression faced 1,600 other union members at Samsung Electronics Service Local.

The report quotes Choi’s haunting suicide note: “The whole time I worked at Samsung SVC was so hard for me. I haven’t been able to enjoy life being so hungry, and everyone’s struggling so hard that just bearing witness to this is also painful.”

The shock of Choi’s death inspired coworkers to take up his cause, spurring nationwide demonstrations and 41 days of strikes. Protest flyers distributed by the workers denounced the company for “a murderous number of hours and inhumane working conditions while our salary continues to decrease.”

To global labor advocates, Samsung’s reputation for oppressing workers and the growing scrutiny of its safety failures point to the company’s structural dysfunction and the need for corporate accountability, ITUC General Secretary Sharran Burrow says via e-mail:

Samsung’s record on labour rights and working conditions, and the problems with slow response to the recall of it’s products, are symptoms of a lack of concern for its consumers and its workforce.

Samsung’s dehumanizing business model isn’t limited to low-paid wage laborers; some of the flagship brand’s aspiring young professionals have reported suffering physical and mental brutalization, and some have not survived their jobs in Samsung’s high-stress work environment.

Labor advocates have campaigned around a series of mysterious illnesses afflicting semiconductor workers for Samsung Electronics recruited in the 1990s and 2000s. The mostly young women worked day and night shifts that would constantly rotate biweekly. But, despite the intensity of the work, they were never given proper protective gear or safety training, according to a Seoul-based victim advocacy group, Banolim (Supporters for the Health and Rights of People in the Semiconductor Industry), which has investigated 223 workers who claim they have, over their years working with hazardous substances, “developed a variety of blood disorders ranging from leukemia to brain tumors to multiple sclerosis. Of the 223, 76 have died.”

Other reported safety abuses include a deadly gas leakage in March 2014 that reportedly left one worker dead, and three worker injuries at a separate plant in early 2013 due to a hydrofluoric acid leakage.

Amid this hostile and dangerous workplace climate, labor advocates say, the company is invested in suppressing labor organizing at all costs. When workers have attempted to unionize, ITUC says their efforts have been deterred “through systematic surveillance, intimidation, dismissals,” and aggressive anti-union propaganda meetings.

The Philippines-based supplier NXP Semiconductors was accused of trying to illegally bust the union by firing workers who sought to organize, which eventually led to a formal dispute settlement through the ministry of labor. The report cites a PowerPoint presentation that directly instructs managers on how to crush unionization drives through intimidation and interference.

A young production technician, Max, recalls in a testimonial about attempting to form a union at Samsung’s Young Shin supplier factory, that after spending years barely scraping by on the minimum wage, working without adequate protective gear, the 34-year-old father said he tried to campaign for a union but was punished by being “put in other positions, like janitorial level. Mopping floors, removing rust off metal. Then cleaning outside the company premises. And then they dismissed me.”

Skilled manufacturing workers like Max are supposed to represent Asia’s rising young workforce—just the type of modern frontline workers who are expected to get a boost from multinational investments under the global free-trade regime, with trade deals like the Trans-Pacific Partnership. But, as Burrow argues, the aggressive expansion of manufacturing empires like Samsung’s must be counterbalanced by a systematic effort to organize its global workforce and implement broad labor standards:

Free trade has been built on a system that has allowed the oppressive model of supply chains to flourish because there are no rules—no floor of human and labour rights that underpin global trade. Where governments are cowed by corporate power they simply do not legislate for or develop compliance to protect even their own citizens.

Exploding gadgets are the embers of a long-burning labor crisis simmering under the gloss of Samsung’s brand. The liability of a defective smartphone model is eclipsed by the rot of an abusive business model.