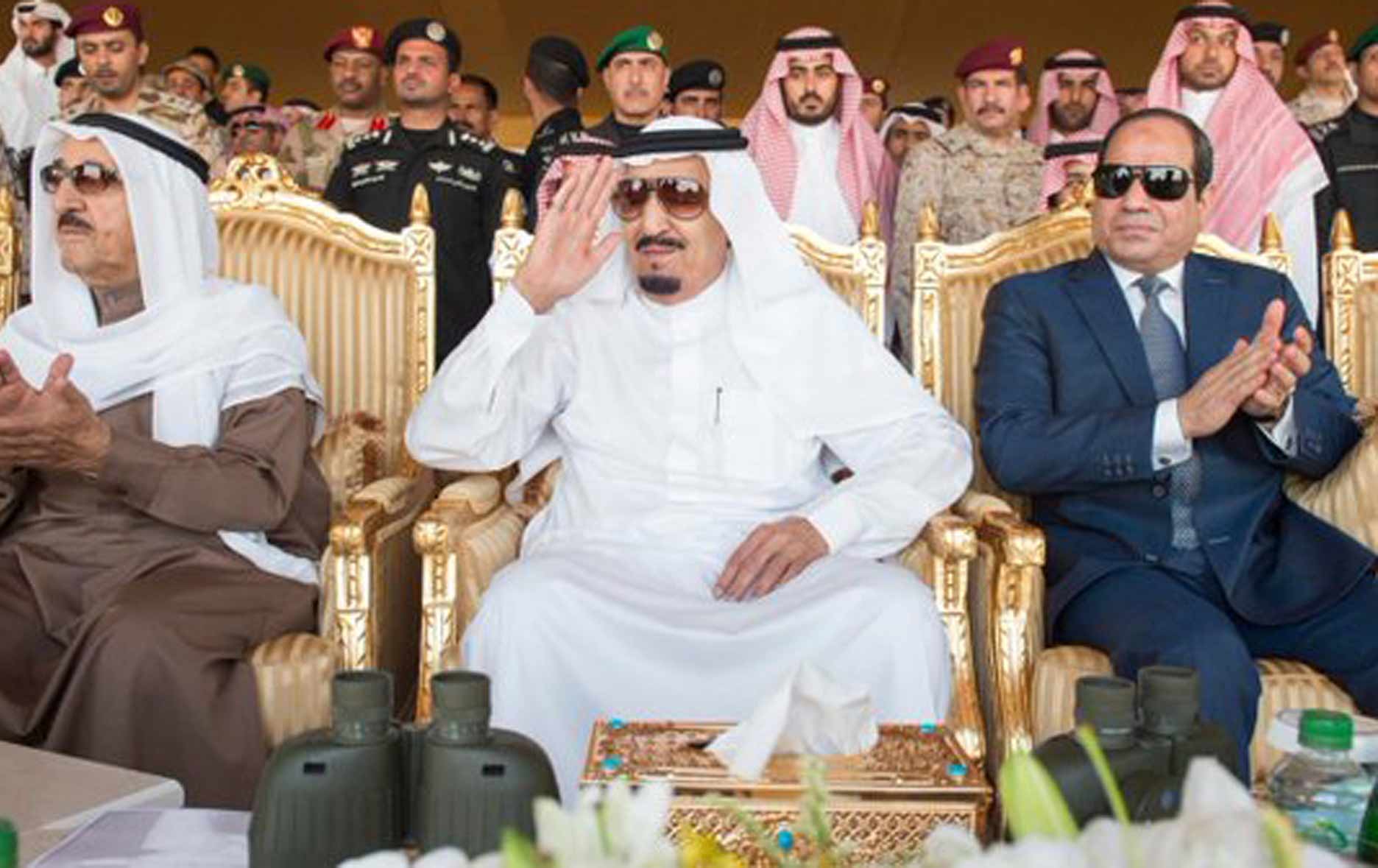 Saudi King Salman’s state visit to Egypt this past weekend announced more than the fraternal Arab solidarity he advertised in his speech to the Egyptian parliament. Egyptian President Abdel Fattah al Sisi’s agreement to cede two disputed Red Sea islands (Tiran and Sanafir) to the kingdom provoked outrage on Egyptian social media and a small demonstration in Cairo resulting in the arrest of the protesters. To many Egyptian youth, Sisi’s willingness to sacrifice Egyptian territory for Saudi largesse epitomized the opportunism of the counter-revolutionary praetorian state.

The visit was not as lucrative for Egypt as had been Saudi overtures in the past three years. The Wahhabi monarch announced plans for a bridge across the Red Sea linking Saudi Arabia and Egypt. He also pledged $1.7 billion in aid and the establishment of a $16 billion joint investment fund rather than large new strings-free aid commitments. Leaks in Riyadh suggested that the days of “free money” from Riyadh to Cairo were over.

The dramatic fall in the price of petroleum has halved the kingdom’s income. Moreover, last year’s pledges of $12 billion by three Gulf states have not resulted in desired changes in Egyptian foreign policy. The Egyptian officer corps declined to help intervene in Yemen, and the anti-fundamentalist nationalists in Cairo support Russia and the Assad regime in Syria, the opposite of Saudi policy.

After the officer corps’ 2013 overthrow of elected president Mohamed Morsi, leader of the Muslim Brotherhood, amid massive popular protests, Saudi Arabia and allies Kuwait and the United Arab Emirates pledged over $30 billion to shore up the shaky military regime in Cairo. At that time, they were eager to see the officers suppress the Muslim Brotherhood, which the royal families fear as a populist force insufficiently deferential to the region’s Establishments—a sentiment with which Sisi and his colleagues concurred. Egypt’s needs far outstripped that amount, however, nor has there been much transparency about how the money has been used. The Egyptian state does not offer much transparency in general. It is a military junta thinly disguised by constitutional trappings. Candidates were strong-armed not to run against Sisi in the 2014 presidential election, and parties were excluded from contesting 80 percent of seats in the 2015 parliamentary elections, ensuring the regime could easily divide, rule, and overwhelm the disorganized independents who formed the majority of MPs.

The most controversial thing about King Salman’s royal procession was the acceptance by Egypt of a fixed maritime border with Saudi Arabia, which implies the ceding of the islands of Tiran and Sanafir, which lie on the Saudi side of the agreed-upon line. Astride the Straits of Tiran, which control access to the Gulf of Aqaba, they gained strategic significance with the opening of the Suez Canal in 1869. Early 20th-century Egypt laid claims on them, based on Ottoman demarcations of the extent of its provinces. When the House of Saud conquered the Hejaz in 1926, it gained the territory that stretched up to the Gulf of Aqaba below Jordan, and maintained that the two islands belonged to it. After Israel was established in 1948, yet another claimant emerged. Saudi Arabia, then militarily weak, quickly arranged for Egypt to lease the two islands in 1950. The Arab nationalist regime of Gamal Abdel Nasser that emerged after an officers’ coup in 1952 revived earlier Egyptian claims.

Egypt’s position was that the Straits of Tiran are a bay inside Egyptian territorial waters rather than an international waterway (lying only six kilometers off the coast of the Sinai Peninsula), and it demanded that ships passing through it submit to an inspection, a demand in which the British government acquiesced. As Israel built its port of Eilat on the Gulf of Aqaba, it needed access to the Red Sea for its lucrative East and South Africa trade, and insisted that the Straits were the high seas and so Egypt must allow passage. In the 1956 attack on Egypt orchestrated jointly by Israel, Britain, and France, Israel captured Tiran and Sanafir. But President Dwight Eisenhower, furious at the premeditated war of aggression, which he maintained contravened the United Nations charter—and fearful that Egypt would be chased into the arms of the Communists—made Israel and its allies withdraw.

Nasser restated his position that Israel was not welcome to ply the Straits of Tiran in May 1967. Although his statement was not acted on, the Israeli leadership cited it as a casus belli in its attack on Egypt in June, and Tel Aviv again occupied the islands. The government of Menachem Begin returned them to Egypt in 1982 as a result of the Camp David Peace Treaty. A small US force was stationed on the islands as part of the ongoing US peacekeeping effort.

In the meantime, the price of petroleum quadrupled in the 1970s and Saudi Arabia emerged as among the wealthiest countries in the world. Late in the rule of dictator Hosni Mubarak, in 2010, Egypt and Saudi Arabia agreed on their maritime borders, and Egypt, eager for Saudi largesse, recognized Riyadh’s claim to the islands. Sisi’s formal recognition of Saudi sovereignty over them was, then, simply an implementation of the Mubarak plan.

Despite Sisi’s massive crackdown on dissent in the Egyptian press and in the blogosphere, during which thousands have been imprisoned, including youth leaders of the 2011 revolution, the ceding of the islands struck a nerve among the public and even among the elite that revived the fearlessness of the revolutionary period.

By Sunday evening 28,000 tweets had been sent with the islands’ names in a hashtag. Another hashtag referring to a character in an Egyptian film, #AwadSoldHisLand, garnered 128,000 tweets. An Egyptian joked that Sisi had had a sale on Egyptian islands: “Buy one, get one free.” Exiled comedian and regime critic Bassem Yousef tweeted a mock Sisi ad, “A billion for an island, 2 for a pyramid, and we’ll throw in some old statues for free.”

Even members of the usually supine elite were horrified. Constitutional jurist Nour Farhat came on television to say that the government does not have the authority under article 151 of the 2014 Constitution (crafted by appointees of Sisi) to relinquish national territory—even if other branches than the executive concurred and even if there were a popular referendum. Because Tiran had been taken by the Israelis twice from the Egyptian military, it is seen as territory that the armed forces had defended. The manager of the state-owned, Establishment newspaper al-Ahram, Ahmed el-Naggar, boldly said on Facebook that “elements of our national borders are untouchable.” The prime minister, apparently alarmed and desiring to give Sisi some cover, abruptly pledged that the measure would be voted on by Parliament.

Naturally, regime opponents such as the Muslim Brotherhood rejected what they called Sisi’s “concession.” Dissident leftist youth groups such as April 6, dissolved by the regime’s secret police, also criticized Sisi. A former presidential candidate, the leftist attorney Khalid Ali, said he rejected any concession of Egyptian territory. As noted, by Sunday evening a handful of protesters had been arrested in downtown Cairo on charges of disrespecting the president and of demonstrating without authorization.

The misstep on the islands came after months of controversy around the killing of a Cambridge graduate student of Italian extraction, Giulio Regeni, who was researching independent Egyptian labor unions. His body was burned and thrown in the desert near Giza, but enough of the corpse survived to show cigarette burns—the signature of Egyptian Interior Ministry torture. Last week, Italy withdrew its ambassador in frustration over the Sisi regime’s unwillingness to be transparent over its investigation. Egyptian youth have adopted Regeni as a symbol of their own persecution at the hands of reaction and counter-revolution.

The issue of conceding islands to Saudi Arabia, however, has the potential to provoke much more widespread opposition to the regime. Much of the Egyptian public genuinely welcomed Sisi in 2013 as a bulwark against instability and against the threat of a hegemonic fundamentalism. He and the other officers appear to have mistaken this yearning for order as carte blanche to institute another seedy and high-handed police state. It would be ironic if the new order were shaken by the disposition of two small islands about which the Egyptian public has probably not even thought for decades.