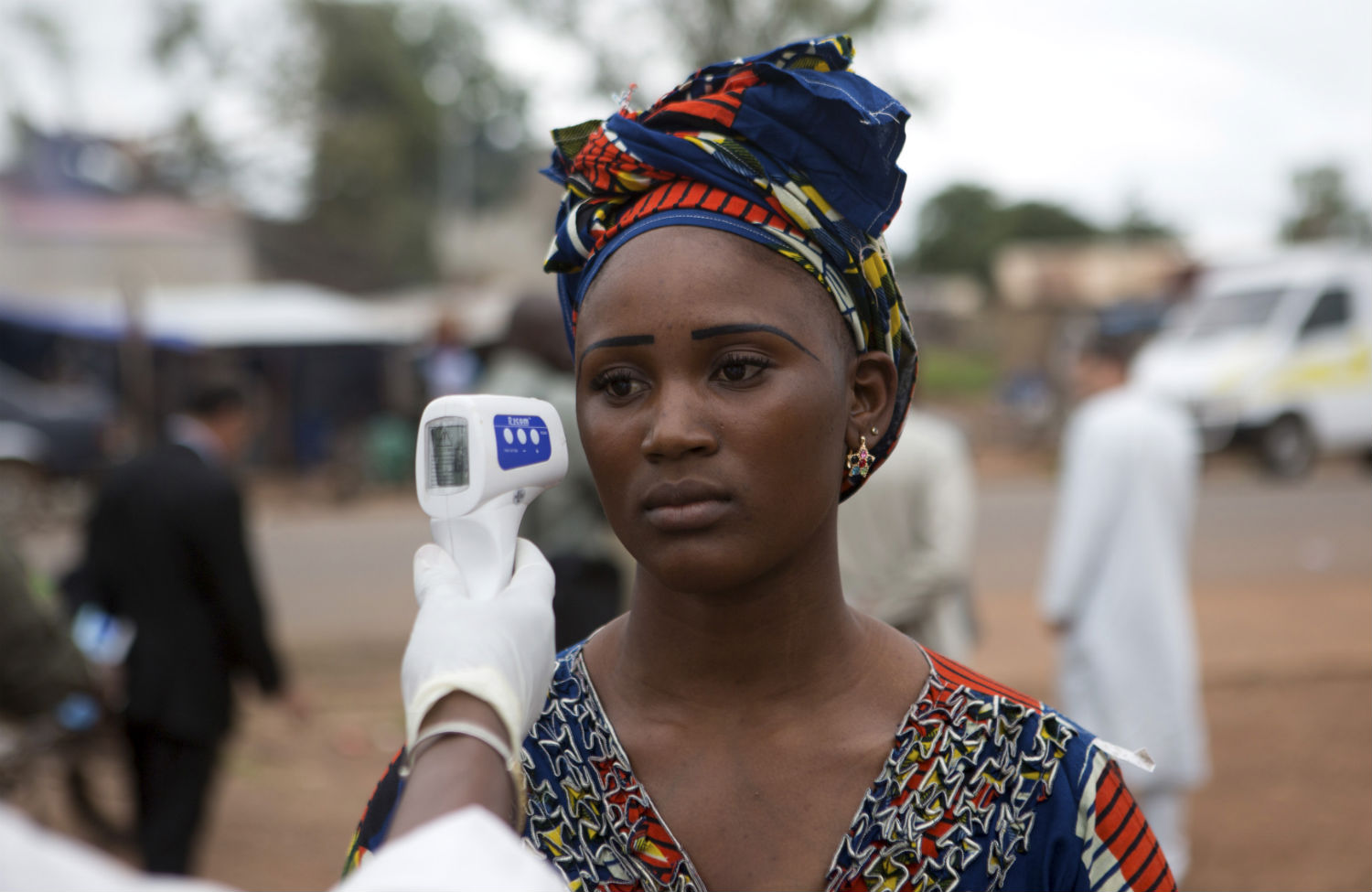 A health worker checks the temperature of a woman entering Mali from Guinea at the border in Kouremale, Mali October 2, 2014. (Reuters/Joe Penney)

As the body count rises in West Africa and the first patient dies on US soil, Americans can be forgiven for panicking about Ebola. But before we go into lockdown, let’s assess the real threat and remember why we have an epidemic in the first place.

Six months ago, Médecins Sans Frontières (Doctors Without Borders), the government of Guinea and some others (myself included) warned of the threat of an unprecedented epidemic. At the time, Ebola had already spread from Guinea to Liberia. Despite our efforts, on April 1, the United Nation’s World Health Organization (WHO), ostensibly the world’s leading public-health institution, insisted that the Ebola outbreak was neither an epidemic nor unprecedented.

On August 8, after months of denial (and the infection and evacuation of two American medics), WHO suddenly reversed itself and declared Ebola a Public Health Emergency of International Concern (PHEIC). This was the second PHEIC announced this year (the resurgence of polio was named one in May), but only the third since the concept was devised in 2005 (the other being for swine flu in 2009). The first child infected in this latest outbreak of Ebola died in December, but by the time WHO recognized the threat posed, the epidemic was out of control.

Something similar happened in Syria. Despite the shocking reappearance of highly contagious polio in May 2013, after it had been eradicated from the country eighteen years earlier, WHO didn’t acknowledge it until October 2013 and, as noted, didn’t announce the PHEIC until May 2014. Polio is spreading in Central Asia, Africa and the Middle East, and last week Pakistan’s number of polio cases reached a fourteen-year high. So much for WHO’s promises of eradication by the end of this year.

An earlier response might have stopped both diseases in their tracks, but in each case WHO denied the gravity of the situation for months. Even then, it emphasized the responsibility of each government to address its own public-health threat, although the state’s lack of health infrastructure was a major reason for the outbreaks in the first place. Indeed, in the case of Syria, it was the government that destroyed the hospitals and attacked the doctors in the opposition-held areas where polio broke out. Small wonder both of these global threats moved quickly across borders.

Part of the reason for this complacency is a “been there, done that” attitude toward infectious disease. Western doctors tend to believe we have discovered, isolated and conquered germs, and have moved on to more difficult non-communicable diseases like diabetes and dementia. As I was taught in medical school in the 1980s, public health systems to control communicable disease are part and parcel of the forward march of civilization. Infectious diseases, meanwhile, have been largely relegated to the poorest outposts (often in Africa), or those countries torn asunder by war. Indeed, WHO, which in recent years has been guided more by politics than needs, has been prioritizing rich-world maladies while its budget for infectious disease diminishes. It admits it could have acted earlier, but blames the delay on the lack of resources. Yet since when is common sense contingent on cash? Médecins Sans Frontières’s budget pales compared with WHO’s, yet it acted on the Ebola epidemic in a timely manner.

Now we are facing the cost of this waning of attention to communicable diseases. We know how to treat heart disease and hypertension, chronic lung disease and cancer, yet have forgotten how to diagnose polio, let alone treat it. Even WHO keeps saying that polio causes permanent paralysis, when in fact experienced practitioners like myself know that up to 50 percent can recover completely. Mia Farrow and Desmond Tutu are living examples. As for Ebola, there’s no money in it. It’s an African disease with a mortality rate that runs as high as 90 percent, we are told. Or is it? The mortality rate in countries with modern health systems could be more like 10 to 20 percent, or even lower. The truth is, we don’t know.

We do know that the rise of infectious diseases is directly related to the lack of basic public-health infrastructure in the poorest states on earth where they thrive. Beyond poverty, both of these epidemics are fuelled by human rights violations—much as HIV was—such as stigma, discrimination, and lack of access to safe water, sanitation, healthcare, essential drugs, education and food. Both epidemics are occurring in countries with long histories of brutal dictatorships and civil war, combined with either the deliberate destruction or neglect of healthcare infrastructure. As such, the WHO’s demands that countries must take responsibility for fighting the virus are unrealistic.

In Syria, the polio outbreak is a direct consequence of the Assad government’s first neglecting public health in the pro-democracy areas of northern Syria, including withholding essential childhood vaccinations, and then deliberately bombing hospitals and clinics as part of its scorched-earth approach to areas perceived as opposition strongholds. In Guinea, food insecurity led to the consumption of bush meat and bats that infected the first child last December. Lack of healthcare and medical personnel delayed the recognition of this disease, while misinformation fostered fear and stigma, driving the disease underground.

There is also a gender dimension. Girls and women are more likely to be infected by men who have recovered, because the Ebola virus is ejaculated in semen for up to seven weeks after recovery. Meanwhile, women are at higher risk as the majority of the healthcare workers are women—the nurses, the midwives, the cleaners—while women also tend to be the ones caring for the sick at home and preparing the dead for funerals. Pregnant women seeking antenatal care are more likely to be exposed to infected healthcare workers.

Then there are basic questions of global equity. The world only really paid attention to Ebola when two Americans (a) got sick, (b) were given an antidote inaccessible to Africans and (c) were evacuated from Africa (nineteenth-century healthcare) to America (twenty-first-century care). Flying doctors from the United States and France back home for First World treatment fosters mistrust—as it should—and raises questions of fairness. More than 4000 have now died from Ebola, but all of the infected Western healthcare workers have survived to date. These inequities reaffirm the view that the global public-health response is mainly about protecting the West.

For Ebola, the US government, which for better or worse means the US military, is well positioned to help, even though any blurring of the military and humanitarian increases the growing risk to aid workers operating in war zones. The Pentagon has the resources, logistics, communications and ability to scramble even while WHO dithers and denies. Understandably, US soldiers will be as fearful of Ebola as everyone else, given the hyperbole. But they are physically fit and without the co-morbidities that many West Africans face—bodies and bloodstreams that are already Occupied Territory by malaria, TB, parasites, worms and various other viruses. Beyond boots on the ground, the US navy could offer impressive resources in terms of ships easily converted into hospitals, naturally quarantined by water, and offering a simple solution to the three-week isolation required for those who have completed their tours.

At the same time, the rising threat posed by epidemics of infectious disease is at odds with the jarring reality of WHO’s inability to control these outbreaks. On WHO’s watch, not only has Ebola thrived to the point of a panic-inducing epidemic, with cases across several countries and in three continents, but polio, once on the verge of eradication, is making a global comeback and mutating into new and lethal mutations. Better leadership is clearly needed, as well as a global commitment to focus WHO on the parts of the world that need its help the most.

Closer to home, we must learn how to recognize not only Ebola but polio, measles and other diseases regaled to history books. Diagnosing these infections isn’t easy: no one comes into the emergency room with “I’ve got Ebola” written on their foreheads. To make it harder, both polio and Ebola start with “flu-like symptoms,” as do many other highly contagious diseases. Here in the United States, Mount Sinai Hospital dealt impressively with a suspected case of Ebola several weeks ago, yet a few months before that a woman with measles was missed twice in the same ER.

Finally, and perhaps most important of all, we should be investing in the public-health institutions in places like West Africa in order to prevent and, if necessary, respond more quickly to threats of communicable disease than a distant UN institution in Geneva. For most of us, infectious diseases have become an afterthought to be considered only when we go to the tropics on holiday; yet in our mobile, hyper-connected world, they are a clear and present danger for all of us. To counter them, we need a better commitment to healthcare, education, safe water, childhood immunization, sanitation and public-health surveillance—not just at home but also in the most vulnerable parts of our interconnected globe. Beyond responding to the Ebola crisis, the United States should lead the way in promoting public health systems in the most impoverished and neglected parts of the world. It’s not only the right and responsible thing to do but will also lead to universal protection from these global threats.