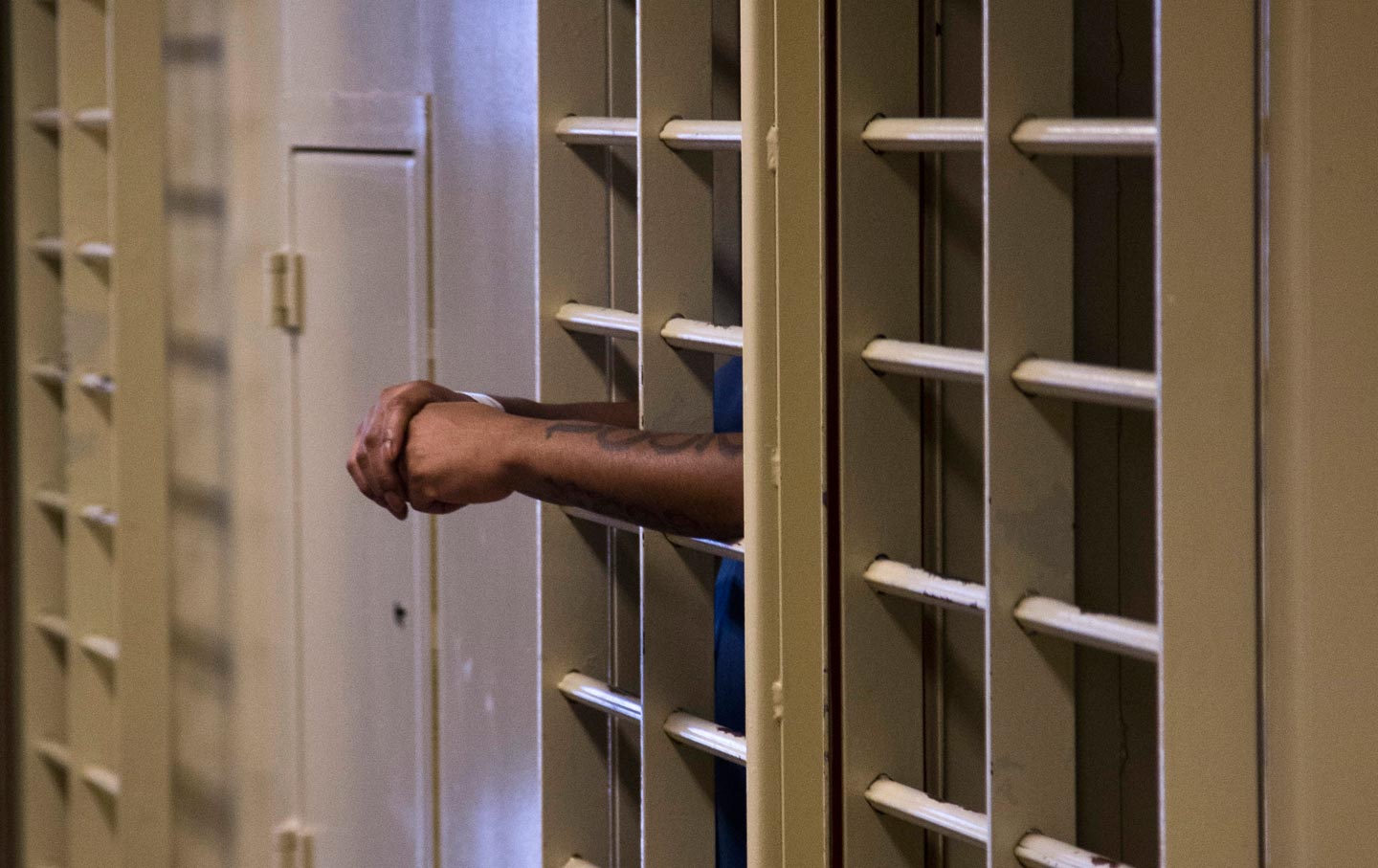 The hands of an inmate in a jail cell in Madison, Wisconsin. (AP Photo / Morry Gash)

On April 24, in a county jail in Milwaukee, Wisconsin, a 38-year-old black man named Terrill Thomas was denied water until he died of thirst.

Thomas was reportedly suffering from a mental breakdown when he was moved to the jail’s segregation unit and his tap water was shut off; six days later, inmates said that Thomas was still crying out for water. Other prisoners complained to guards, but nothing was done. Last month, the Milwaukee County Medical examiner ruled his death a homicide.

Thomas was awaiting court-ordered psychiatric examination when he died. According to reports from other inmates, he was behaving erratically, screaming nonsense, and stuffing balls of toilet paper into his mouth. When placed in a regular cell, Thomas caused his sink and toilet to overflow. That was ostensibly the reason he was moved to solitary confinement and his water was shut off. Put simply, corrections officers withheld Terrill Thomas’s only source of drinking water, killing him, because they didn’t want to clean up his mess.

As horrifying as Thomas’s death was, I believe it is symptomatic of a much a larger problem regarding water access in the United States today. We continue to fail in our duty as a society to provide every American with access to safe, clean drinking water. We have especially failed those that rely on us the most: the poor, the disadvantaged, and those in our collective care.

Events of the last two years have made this devastatingly clear. First there were mass water shut-offs in Detroit; then nefarious lead poisonings in Flint; and this month, dramatic protests against the Dakota Access Pipeline that many fear will contaminate the drinking water of nearly 18 million people. Twelve percent of Native Americans don’t have a safe tap or toilet at home. In fact, more than half a million US households, most of them rural, economically disadvantaged, and of color, still lack basic plumbing facilities. Now a 38-year-old black man suffering from mental illness is dead after corrections officers turned off his drinking water and ignored his pleas for help.

And he’s not even the first.

Thomas’s case, which has yet to trigger criminal proceedings, is the latest in a string of similar dehydration homicides over the past decade. Complaints citing denial of drinking water, many of them on behalf of prisoners with mental illness, have been filed in Virginia, West Virginia, Michigan, New York, and South Carolina. In an eerily similar case in Harrisburg, Pennsylvania, in 1992, prison officials cut off water to the cell of John Powell, a convicted rapist suffering from severe psychosis. Powell died of thirst after being denied water for 10 days.

Let’s be clear: Death by dehydration is torture. Over several days, the body’s cells shrink and its organs begin to fail, until the dehydrated person falls into a coma and dies. This physical pain is accompanied by unimaginable mental anguish, first as the person is robbed of their agency, then as they are gripped by a desperate fear for life, and finally as vessels carrying blood to the brain begin to rupture and delirium sets in. To treat a human being this way is shocking and barbaric.

The idea that every person has a right to clean drinking water is a basic cornerstone of social custom and law. The Geneva Conventions–which have been ratified by nearly every country on earth–require that prisoners of war always be provided water for drinking and bathing. Those rules represent hundreds of years of international custom and were a direct result of prisoner treatment by the Nazis during the Holocaust. Other legal norms, including the Standard Minimum Rules for the Treatment of Prisoners (1955) and the American Bar Association’s Standards for the Treatment of Prisoners, do the same.

Even developing nations with far fewer resources than our own recognize this. In 2011 a partner organization in South Sudan requested that my organization, DIGDEEP, fund a well in a prison near the Ugandan border. Inmates there were forced to collect water from streams and hand-dug wells, causing diarrhea, typhoid, fungal infections, and worms. The request came from the prison’s warden and his wife, who were horrified by the condition of the men in their care. An uneducated prison warden in one of the world’s least-developed countries understood by instinct what professional corrections officers in Milwaukee chose to ignore. (Ironically, the US State Department routinely criticizes other countries for failing to provide adequate drinking water to inmates, which it considers a “persistent and pervasive” humanitarian concern regarding detention abroad.)

We need to hold those responsible for Terrill Thomas’s death accountable for their crime. An example should be made in this case, one that sends a clear message to policy-makers, prison operators, and corrections officers: denial of drinking water to a person in custody is barbaric, unjustifiable, and illegal. But beyond this corrective action, we need to work as a nation to ensure that every American, everywhere, enjoys the human right to water.

Americans without access to clean, running water should get it. Americans who have clean water at home should learn to respect and conserve it, and have their access protected. Most importantly, those entrusted to our collective care—the elderly, the mentally handicapped, the economically marginalized, even the incarcerated—should be guaranteed access to this most basic stuff of life.

Our failure to guarantee every American access to clean, adequate water isn’t just a failure of governance; it’s a failure of society at large. As we continue to use more water per capita than any other developed country, the communities that rely on us here at home suffer unimaginably. The right to water is only as strong for you and me as it is for the weakest among us. We need to protect those who don’t have it, or we’ll eventually share their fate.