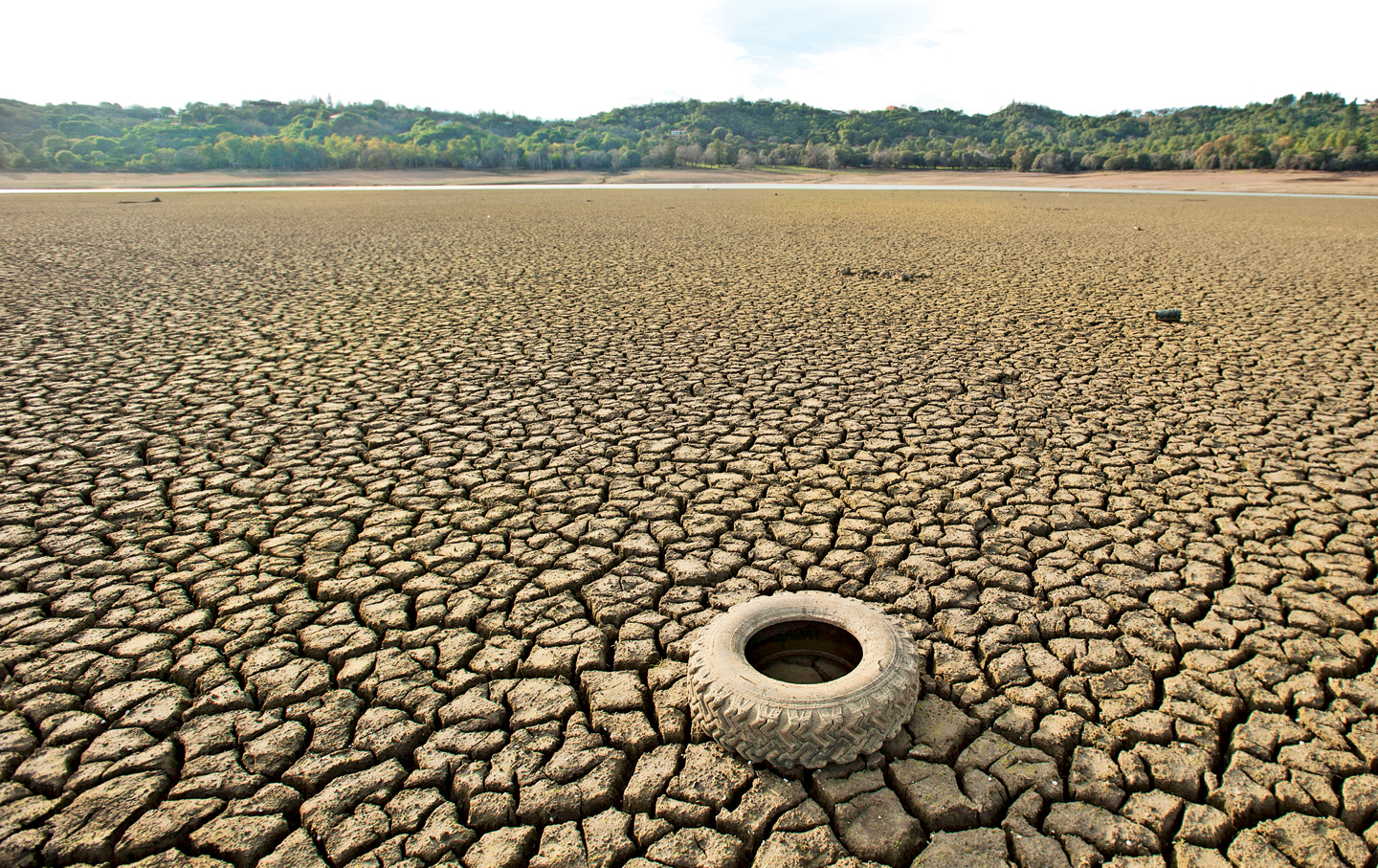 A tire rests on the dry bed of Lake Mendocino in Ukiah, California. (Noah Berger / Reuters)

The United Nations reports that we have 15 years to avert a full-blown water crisis and that, by 2030, demand for water will outstrip supply by 40 percent. Five hundred renowned scientists brought together by UN Secretary-General Ban Ki-moon said that our collective abuse of water has caused the earth to enter a “new geologic age,” a “planetary transformation” akin to the retreat of the glaciers more than 11,000 years ago. Already, they reported, a majority of the world’s population lives within a 30-mile radius of water sources that are badly stressed or running out.

For a long time, we in the Global North, especially North America and Europe, have seen the growing water crisis as an issue of the Global South. Certainly, the grim UN statistics on those without access to water and sanitation have referred mostly to poor countries in Africa, Latin America, and large parts of Asia. Heartbreaking images of children dying of waterborne disease have always seemed to come from the slums of Nairobi, Kolkata, or La Paz. Similarly, the worst stories of water pollution and shortages have originated in the densely populated areas of the South.

But as this issue of The Nation shows us, the global water crisis is just that—global—in every sense of the word. A deadly combination of growing inequality, climate change, rising water prices, and mismanagement of water sources in the North has suddenly put the world on a more even footing.

There is now a Third World in the First World. Growing poverty in rich countries has created an underclass that cannot pay rising water rates. As reported by Circle of Blue, the price of water in 30 major US cities is rising faster than most other household staples—41 percent since 2010, with no end in sight. As a result, increasing numbers cannot pay their water bills, and cutoffs are growing across the country. Inner-city Detroit reminds me more of the slums of Bogotá than the North American cities of my childhood.

Historic poverty and unemployment in Europe have also put millions at risk. Caught between unaffordable rising water rates and the imposition of European-wide austerity measures, thousands of families in Spain, Portugal, and Greece have had their water service cut off. An employee of the water utility Veolia Eau was fired for refusing to cut supplies to 1,000 families in Avignon, France.

As in the Global South, the trend of privatizing water services has placed an added burden on the poor of the North. Food and Water Watch and other organizations have clearly documented that the rates for water and sewer services rise dramatically with privatization. Unlike government water agencies, corporate-run water services must make a profit for their involvement.

And, as in the Global South, aging pipes and leaking water systems are not being repaired or upgraded by Northern municipalities, which have become increasingly cash-strapped as public funds dry up. It is estimated that the United States needs to spend $1 trillion over the next twenty-five years for water infrastructure. To pay for this in a time of tax-cutting hysteria, it is likely that the burden will fall on families and small businesses, pushing water rates even higher.

Climate change is another equalizing phenomenon. Melting glaciers, warming watersheds, and chaotic weather patterns are upsetting the water cycle everywhere. Higher temperatures increase the amount of moisture that evaporates from land and water; a warmer atmosphere then releases more precipitation in areas already prone to flooding and less in areas prone to drought. Indeed, drought is intensifying in many parts of the world, and deserts are growing in more than 100 countries.

Additionally, the relentless over-extraction of groundwater and water from rivers has caused great damage in the Global South and is now doing the same in the North. A June 2015 NASA study found that 21 of the world’s 37 largest aquifers—in locations from India and China to the United States and France—have passed their sustainability tipping points, putting hundreds of millions at risk. Stunningly, more than half the rivers in China have disappeared since 1990. Asia’s Aral Sea and Africa’s Lake Chad—once the fourth- and sixth-largest lakes in the world, respectively—have all but dried up due to unremitting use for export-oriented crop irrigation.

We need to change our relationship to water, and we need to do this quickly.

In Brazil, almost 2 trillion gallons of water are extracted every year to produce sugarcane ethanol. Cutting down the Amazon rain forests has dramatically reduced the amount of rain in the hydrologic cycle. Healthy rain forests produce massive amounts of moisture that are carried on air currents called “flying rivers” and supply rain to São Paulo thousands of miles away. The destruction of the rain forests and groundwater mining for biofuels has created a killing drought in a country once considered the most water-rich in the world. Not surprisingly, large-scale cutoffs and water rationing are taking a toll on millions of poor Brazilians.

The story repeats itself in the North. According to the US Department of Agriculture, the Ogallala Aquifer is so overburdened that it “is going to run out…beyond reasonable argument.” The use of bore-well technology to draw precious groundwater for the production of water-intensive corn ethanol is a large part of this story. For decades, California has massively engineered its water systems through pipelines, canals, and aqueducts so that a small number of powerful farmers in places like the Central Valley can produce water-intensive crops for export. Over-extraction is also putting huge pressure on the Great Lakes, whose receding shorelines tell the story.

There is some good news along with these distressing reports. An organized international movement has come together to fight for water justice, both globally and at the grassroots level. It has fought fiercely against privatization, with extraordinary results: Europe’s Transnational Institute reports that in the last 15 years, 235 municipalities in 37 countries have brought their water services back under public control after having tried various forms of privatization. In the United States alone, activists have reversed 58 water-privatization schemes.

This movement has also successfully fought for UN recognition that water and sanitation are human rights. The General Assembly adopted a resolution recognizing these rights on July 28, 2010, and the Human Rights Council adopted a further resolution outlining the obligations of governments two months later.

Working with communities in the Global South, where water tables are being destroyed to provide boutique water for export, North American water-justice activists have set up bottled-water-free campuses across the United States and Canada. They have also joined hands to fight water-destructive industries such as fracking here and open-pit mining in Latin America and Africa.

The most important defining feature of this movement is that it is based on solidarity. The same mix of issues confronts the Global North and South alike, and it’s only through respect and the sharing of resources, tactics, and information that we will bring water justice to communities around the world. Water activists increasingly understand that many of the assaults target indigenous lands, and that indigenous leadership and solidarity are key to the success of this movement.

It has now become time for governments around the world to step up and take serious action. It is utterly astonishing to me that, with the many (and growing) water crises across the United States, the issue of water does not come up in presidential campaigns. Energy, yes—water, no.

We humans have used the planet’s fresh water for our pleasure and profit, and created an industrial model of development based on conquering nature. It is time to see water as the essential element of an ecosystem that gives life to us all, and that we must protect with vigor and determination. We need to change our relationship to water, and do it quickly. We must do everything in our power to heal and restore the planet’s watersheds and waterways.

In practice, this means we need a new ethic that puts water and its protection at the center of all of the laws and policies we enact. The world would be a very different place if we always asked how our water practices—everything from trading across borders to growing food and producing energy—affect our most valuable resource.

Water must be much more equitably shared, and governments must guarantee access by making it a public service provided on a not-for-profit basis. The human right to water must become a reality everywhere. Likewise, water plunder must end: Governments need to stand up to the powerful industries, private interests, and bad practices destroying water all over the world. Water everywhere must be declared a public trust, to be protected and managed for the public good. This includes placing priorities on access to limited supplies, especially groundwater, and banning private industry from owning or controlling it. Water, in short, must be recognized as the common heritage of humanity and of future generations.

The global water crisis now unites us in a common struggle. Will its scarcity lead to conflict, violence, and war? Or it is possible that water will become a negotiating tool for cooperation and peace? Can it be nature’s gift to teach us how to better live with one another and tread more lightly on Mother Earth?

I surely hope so.