After the 2012 election, the Republican Party released a much-discussed “autopsy” report that concluded that the country is changing—becoming less white, less Christian, and more tolerant toward gays and lesbians—and that the party had to adapt to this emerging electorate to remain viable. Donald Trump’s election was driven by those who flatly—and angrily—rejected that conclusion.

It was the last gasp of a coalition in decline, and it was only possible due to interventions by the FBI, unknown hackers, and Wikileaks—and a fourth estate that was incapable of enforcing long-established norms of American democracy on a celebrity demagogue whose greatest gift is an intimate understanding of how to dominate the news cycle.

For years, conservatives had embraced the idea that they were losing “their” country—to immigrants, hyper-PC college kids, and liberal coastal elites who hated them—and Republicans promised that they could turn back the clock and “take it back.” It primed the pump for Trump’s promise to “make America great again.”

But the base that message appealed to was shrinking. Emory University political scientist Alan Abromowitz identified the most loyal Republicans as married white people who identify as Christian. “In American politics today,” he wrote in 2008, “whether you are a married white Christian is a much stronger predictor of your political preferences than your gender or your class—the two demographic characteristics that dominate much of the debate on contemporary American politics.” In the 1950s, white married Christians made up around 80 percent of the American electorate, but by 2004 that core group of the Republican base had fallen to just 40 percent of voters. They will continue to decline; fewer than one-in-five young voters are married white Christians.

It was that shrinking base that wouldn’t allow their party to evolve. As the country became more diverse, Republican congressional districts actually became whiter in 2012, and more conservative. Ryan Lizza identified 80 districts, representing about 12 percent of the voting population, that he called the “Suicide Caucus” because of their ability to “push the Republican Party into a strategic course that is condemned by the party’s top strategists” on issues like LGBT rights and immigration. In these districts, Barack Obama lost to Mitt Romney by an average of 23 points, and Republican representatives beat their Democratic opponents by an average of 34 points. They were insulated from the rest of the country. With a base riled up by conservative media and more fear of a Tea Party primary challenger than a general election defeat, the Suicide Caucus rendered the GOP’s autopsy report a mere footnote to the 2012 election.

So, caught between demographic headwinds and a base that wouldn’t let it adapt to them, the Republican Party had to set its sights on democratic pluralism itself. With control of a majority of state governments, they continued to pass laws making it harder to vote. A comprehensive study of the impact of strict photo-ID laws by researchers at UCSD found that they depress turnout by 8.8 percent among Democrats, but only by 3.6 percent among Republicans. GOP officials cite “voter fraud” to justify them, although that’s not really a thing. In unguarded moments, they often admit that voter suppression is their intent. Fourteen states had passed new restrictions on voting in time for the 2016 election, including Michigan and Ohio.

In January, Trump will become the second Republican in five cycles to lose the popular vote and win the White House.

We don’t know to what extent voter suppression swung the outcome in 2016, although Ari Berman reported that as many as 300,000 Wisconsinites didn’t have the necessary ID to vote, and Trump won the state by 27,000. We also don’t know the cumulative effect of the huge upswing in incidents of voter intimidation by Trump supporters, although it was clearly very ugly out there on Election Day.

And it’s not just active voter suppression. Republicans always rely on low turnout—they’ve held onto their congressional majority and won a number of state houses by dominating midterm contests in which around a third of eligible voters participate. If non-voters voted, the GOP would be hard-pressed to win anything outside of the Deep South. One in four Americans aren’t even registered to vote, and, according to an analysis by Sean McElwee, that group is significantly less white, and less Republican, than registered voters: 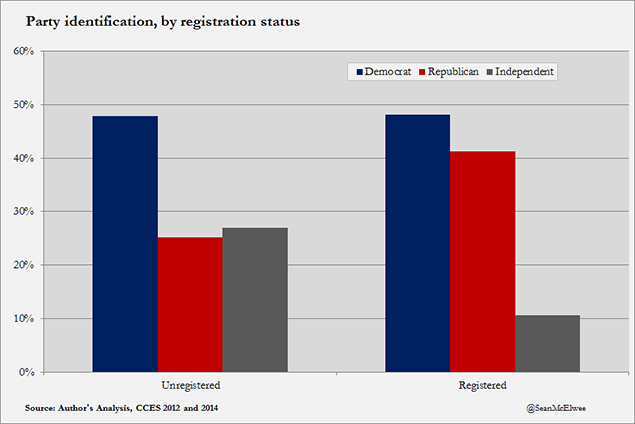 The United States is a country with 5 percent of the world’s population, and around a quarter of its prisoners. Six million people are barred from voting by voter disenfranchisement laws that became popular as a means of checking African Americans’ political power in the post–Civil War era. According to the Sentencing Project, 75 percent of them have served their time and paid their debt to society. They are taxed without representation.

Donald Trump didn’t win because his supporters were all racists, or welcomed his misogyny, although they did tolerate it. His nomination represented a backlash by a small group of voters that looked a lot like the alt-right. According to an analysis by Sean McElwee and Jason McDaniels, Trump’s primary voters held more negative views of Latinos, Muslims, LGBT people, and feminists than those who supported the other Republican candidates, and those differences were statistically significant. They also found that “attitudes about race and racial identity are stronger motivations for Trump supporters” than those backing the other candidates, while “variables connected to economic anxiety do not predict Trump support after other factors are controlled for.” Only around 13 percent of eligible voters participated in the GOP primaries, and 55 percent of them supported someone other than Trump. But in a fractured field, 45 percent was enough to make him the party’s standard-bearer.

After he secured the nomination, partisanship kicked in, and most Republicans simply voted for the Republican. According to the exit polls, 90 percent of self-identified Republicans supported him, down just three percentage points from Mitt Romney’s performance in 2012. Half of Trump voters said they had reservations about him.

Ultimately, Democratic turnout was down across the board by just enough to let Trump slide into the White House. Two weeks before the election, BloombergBusinessweek reported that the Trump campaign’s strategy to win despite the bleak polls was to “shrink” the electorate.

In the end, Clinton underperformed Obama among most demographics. Yet we shouldn’t give Trump too much credit—his campaign had an enormous amount of outside help. We can’t say for sure how much impact Wikileaks’ slow and steady release of internal campaign e-mails had, nor that of FBI Director James Comey’s October surprise, but we do know that late-deciders broke heavily for Trump in the key swing-states. The cumulative result was an election that may have been free, but certainly wasn’t fair.

Throughout a vitally important campaign, the media spent a ridiculous amount of time focusing on Clinton’s e-mails. The networks’ evening newscasts devoted three times as much time to the private server Clinton set up 10 years ago than it did to all policy issues combined. It was a process story, just like Trump’s refusal to release his taxes or Senate Republicans’ unprecedented blockade of Merrick Garland, Obama’s pick to fill the Supreme Court vacancy resulting from Antonin Scalia’s death. How would this race have ended if they’d devoted similar amounts of coverage to those three stories? Or if they’d covered the genuinely corrupt Trump Foundation with even half the zeal with which they covered Clinton’s?

Hillary Clinton was an unpopular candidate with a lot of baggage, but so was Trump, and it was all of these factors coming together that provided him the margin of victory. Like a modern airline crash, multiple systems had to fail. Trump won because he and his allies undermined an already broken democracy.

In January, he will become the second Republican in five cycles to lose the popular vote and win the White House. When all the votes are counted, he’ll probably lose by as many as 2 million. His party will control 55 percent of the seats in the House of Representatives, despite winning 50 percent of the popular vote as of this writing. In the current Senate, 20 million more Americans voted for the 46 members of the Democratic caucus than for the 54 Republicans who control the chamber. Cumulatively, Democrats are about 6 million votes ahead in the 33 Senate races decided this year, and are set to pick up one seat.

Trump will appoint a right-wing justice to the Supreme Court, filling a vacancy that those Republicans who lost their popular vote kept open for the better part of a year. That justice will join a conservative majority with two others appointed by the last president to lose the popular vote. It was that majority that gutted the Voting Rights Act and allowed red states to run wild with new voting restrictions. This is not how democracy is supposed to work.

Donald Trump’s presidency is illegitimate. But with a unified government, he’ll be able to undo most of the hard-fought achievements of the country’s first black president, who was twice elected by wide margins and is among the most popular outgoing presidents in modern history. It’s even worse than that—if Paul Ryan is able to fulfill his long-held dream of privatizing Medicare, Trump will unravel a decent chunk of the social safety net established during the Great Society era a half-century ago.

Trump’s election must serve as a wake-up call. Democrats and progressives need to organize voters full-time, and not just fly in during election years. Where they have power—and when they regain it at the federal level—Democrats need to focus on making our democracy work—they need to make Election Day a holiday, push automatic registration, advocate for more early voting and recognize that the Electoral College was established to preserve slavery, and needs to go. We need to restore felons’ voting rights after they’ve served their time. Democracy may be good for the party, but it’s also a vital principle that needs to be vigorously defended.

And in the short-term, small- and large-d democrats need to recognize that Donald Trump is not our legitimate president, and oppose him at every turn. Trump can’t be allowed a second term. This isn’t about partisan business as usual so much as fending off an existential threat to our pluralistic democracy.