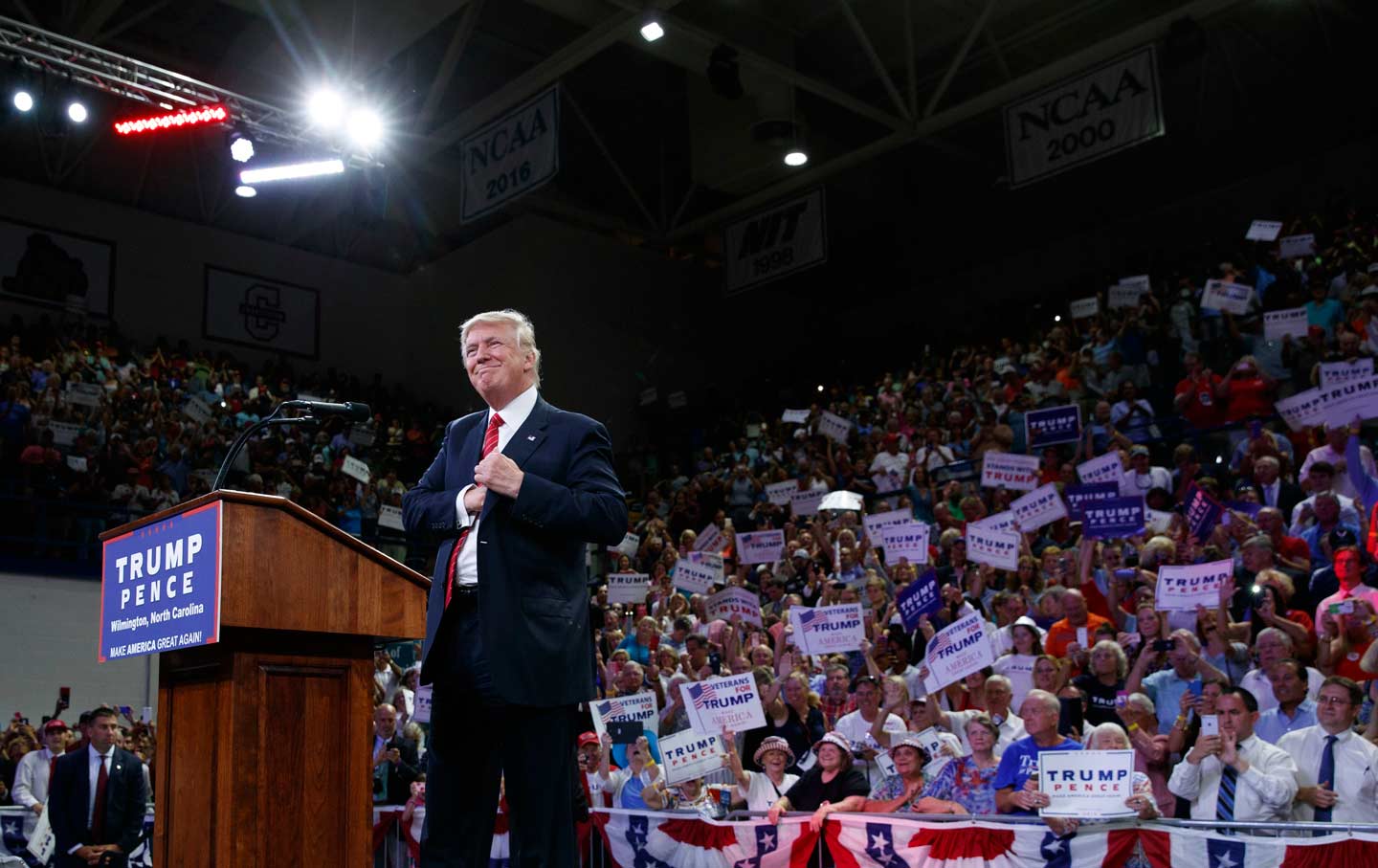 Republican presidential nominee Donald Trump at a rally at the University of North Carolina–Wilmington on August 9. (AP Photo / Evan Vucci)

At a campaign stop in Wilmington, North Carolina, on Tuesday afternoon, Donald Trump made an extemporaneous comment that appeared to suggest that Hillary Clinton should be shot to prevent the appointment of liberal Supreme Court judges:

The straightforward reading of these comments would be that he suggested assassination, if even in a joking manner. (Ending sentences in “I don’t know” is a common Trump locution after a joke.) It’s not totally clear whether Trump meant Clinton would be the target, or that he was suggesting shooting the judicial nominees or using arms in some other way to prevent them from taking a seat on the court.

Trump’s campaign immediately blasted out a statement that attempted to clarify his remarks. “It’s called the power of unification—2nd Amendment people have amazing spirit and are tremendously unified, which gives them great political power. And this year, they will be voting in record numbers, and it won’t be for Hillary Clinton, it will be for Donald Trump,” said Trump adviser Jason Miller. Trump was clearly talking about a hypothetical time after Clinton had been elected and was selecting nominees, however.

Regardless of what was in Trump’s head when he made the comment, there is little doubt that legions of his fans will take this as a suggestion of violence—Second Amendment solutions to government overreach is a common formulation among Tea Partiers and radical pro-gun groups.

Last month, Ben Carson—who has endorsed Trump—said on Fox News, “They’re always saying you don’t need a high-powered weapon to hunt deer. The Constitution is not about deer hunting. It’s about people being able to defend themselves from an overly aggressive government or an external invasion.”

When she was campaigning for the senate in 2014, now-Senator Joni Ernst said at an NRA rally, “I have a beautiful little Smith & Wesson, 9 millimeter, and it goes with me virtually everywhere. But I do believe in the right to carry, and I believe in the right to defend myself and my family—whether it’s from an intruder, or whether it’s from the government, should they decide that my rights are no longer important.”

In 2010, Nevada Senate candidate Sharron Angle caused a major controversy when she said, “If this Congress keeps going the way it is, people are really looking toward those Second Amendment remedies and saying my goodness what can we do to turn this country around? I’ll tell you the first thing we need to do is take Harry Reid out.”

Threatening violence against Democratic presidents is not new ground for many hard-right politicians either. Senator Jesse Helms famously said in 1994 that Bill Clinton “better have a bodyguard” if he were to visit any military bases in North Carolina. Earlier this year, Texas governor Greg Abbott tweeted that if Obama wanted “more gun control,” he should “COME AND TAKE IT,” along with an image of a cannon. Speaking about Obama at a Christian conference in June, Senator David Purdue prayed, “Let his days be few.” Following the shooting of police officers in Dallas last month, former Congressman Joe Walsh tweeted “This is now war. Watch out Obama.”

Even people close to Trump have been fairly explicit about assassinations. His former butler wrote on Facebook that Obama should be “hung from the portico” of the White House (actually, the “white mosque,” in his phrasing). A Trump advisor, Al Baldasaro, said last month that “Anyone that commits treason should be shot. I believe Hillary Clinton committed treason.” Trump gave Baldasaro a shout-out at a campaign stop earlier this week.

This long lineage of violent comments makes it irrelevant what Trump truly meant—it’s about what many of his supporters will hear, which is an amplification of the idea that guns should be used against a supposedly over-reaching or illegitimate government.

It’s frightening to recall that in 2012, when Trump briefly believed that Romney would win the popular vote but lose the electoral college tally, he tweeted a call for “revolution.” With his comments Tuesday, and recent assertions that the November election will be “rigged,” we are approaching an incredibly dangerous situation.