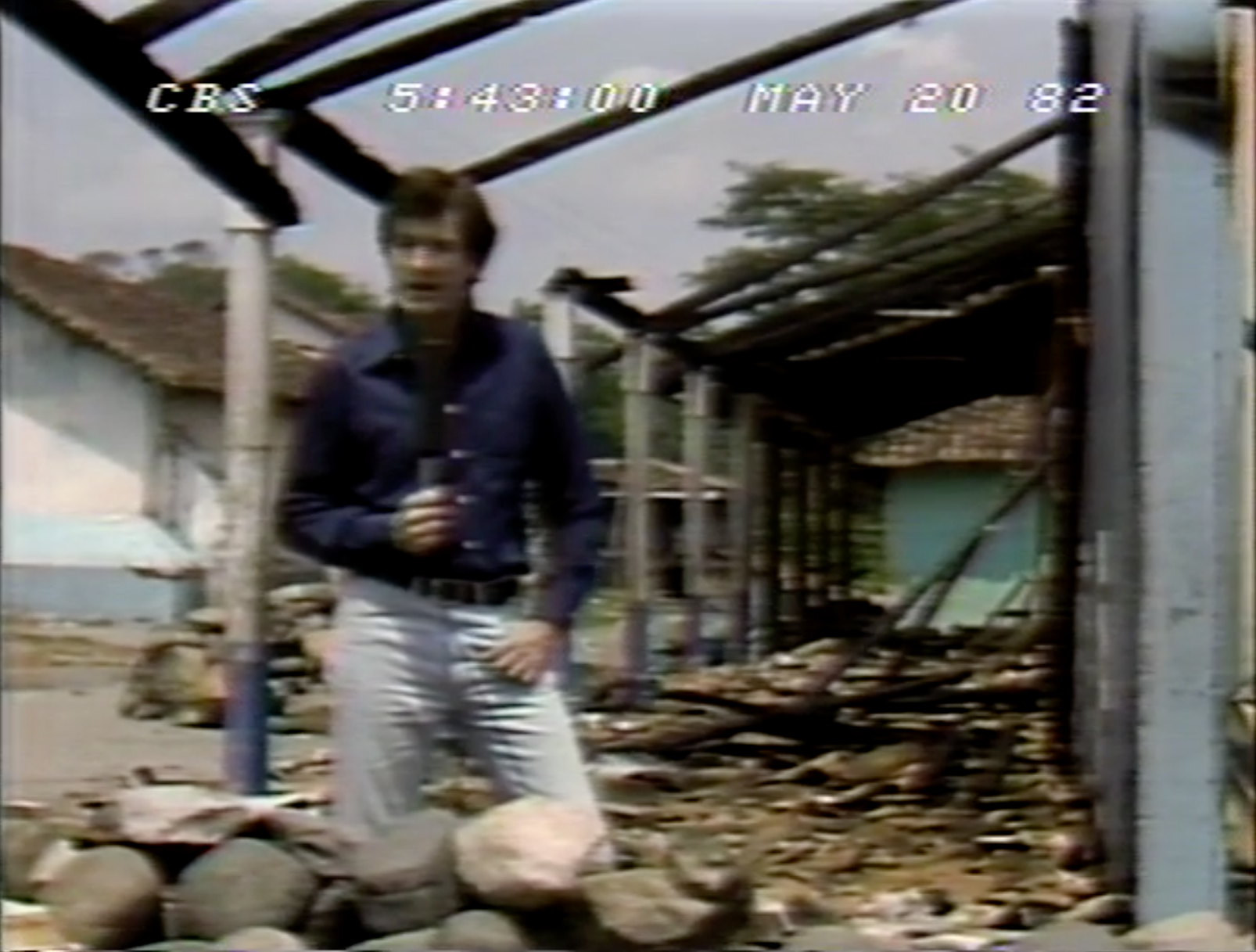 Before Bill O’Reilly was, well, Bill O’Reilly, he worked for a time as a foreign correspondent for CBS Nightly News, anchored by Dan Rather. O’Reilly talks about that period of his career in two of his books, and in both mentions that in early 1982 he reported from northeastern El Salvador, just after the infamous El Mozote Massacre. “When the CBS News bureau chief asked for volunteers to check out an alleged massacre in the dangerous Morazán Territory, a mountainous region bordering Nicaragua, I willingly went.”

El Mozote is a small, hard-to-reach hamlet. The massacre took place on December 11, 1981, carried out by US-trained Atlacatl Battalion, which was not just trained but created by the United States as a rapid response unit to fight El Salvador’s fast-spreading FMLN insurgency. The killing was savage beyond belief: between 733 and 900 villagers were slaughtered, decapitated, impaled and burned alive.

The story of the massacre was broken on the front page of The New York Timesby the journalist Raymond Bonner and in The Washington Post by Alma Guillermoprieto; both stories were published on January 27, 1982, and accompanied by photographs taken by Susan Meiselas. Bonner and Meiselas got to El Mozote, after hearing about the massacre, by walking for days in from Honduras. Guillermoprieto wrote about seeing “countless bits of bones—skulls, rib cages, femurs, a spinal column” poking “out of the rubble.” Bonner noted the “charred skulls and bones of dozens of bodies buried under burned-out roofs, beams, and shattered tiles.” Later, Mark Danner reported on the massacre in detail, first in a lengthy New Yorker essay and then in a book.

Aside from the brutality of the killing, El Mozote is distinguished by the fact that Washington moved quickly to cover it up. It was, in a way, the first massacre of the “second Cold War,” the Reagan administration’s drive to retake the third world; what My Lai was to the 1960s, El Mozote was to the 1980s (later, in 1989, Atlacatl would commit another infamous crime: the execution of six Jesuit priests, their housekeeper and her daughter).

In addition to describing the massacre, Danner documents the cover-up in detail: the US embassy in El Salvador immediately disputed Bonner’s and Guillermoprieto’s reporting, as did New Right organizations like Accuracy in Media. Thomas Enders, Reagan’s assistant secretary of state for inter-American Affairs, and Elliott Abrams, assistant secretary of state for human rights, denied the killing. Abrams said “it appears to be an incident that is at least being significantly misused, at the very best, by the guerrillas.” The Wall Street Journal called Bonner “overly credulous” and “out on a limb” and placed the word massacre in “scare quotes.” The Times sided with the critics, and Bonner eventually left the paper, after first being transferred to the business section.

O’Reilly doesn’t give an exact date for when he travelled to El Salvador, but he writes that it was just before the Falklands War. In other words, probably in March 1982, between the first reports of the “alleged massacre,” in late January, and Argentina’s early April invasion of the Malvinas. Here’s O’Reilly’s account, from his book, The No Spin Zone:

A few weeks after taking the CBS job I was flown to El Salvador to report on the war going on there at the time. I drew an assignment that sent me to the Morazán province in the mountainous northeastern part of that beautiful country. This was ‘Indian country,’ a place where the communist guerrillas (‘los muchachos’) operated with impunity. It was a dangerous place, and my crew—driver, producer, and cameraman—was not thrilled to be going there. It took us a full day to drive to Morazán from San Salvador, the capital city, because all the bridges had been blown up and we had to ford the rivers in our van. This was slow going, making us easy targets. Our only protection was a message painted in black letters over and over again on the sides of the van: periodistas—no dispare (Journalists—don’t shoot).

O’Reilly continues along these lines, emphasizing the danger he and his crew faced. He recounts being given the “local war news” by a Salvadoran army colonel: “The ‘muchachos’ had wiped out a small village called Meanguera a few miles to the south because its mayor was deemed friendly to the government. The atrocity had not been confirmed, though, because nobody in his right mind would go into the guerrilla-controlled areas.”

Note that O’Reilly doesn’t mention the massacre at El Mozote. He rather focuses on a supposed killing committed by leftist insurgents in nearby Meanguera (Meanguera, a municipal town center, is nine kilometers away from the hamlet of El Mozote). It is extremely unlikely that O’Reilly would not have known about the El Mozote massacre. Not only was it reported on in all the major papers, the Reagan administration’s denials had themselves become a story (The Wall Street Journal ran its attack on Bonner on February 10).

In any case, O’Reilly went to Meanguera and not El Mozote. Leigh Binford, an anthropologist who wrote a great book on the larger context of the massacre, tells me that “all of these municipal centers sustained attacks by the FMLN; they were, after all, where the repressive forces (National Guard or Treasury Police) were housed, and from which they had been making forays into the countryside over the course of at least a year to kill, harass, capture, and torture for some time.” So it is very possible that Meanguera was attacked by the rebels. But it certainly wasn’t “wiped out.” In other words, going to Meanguera in early 1982 would be as if Seymour Hersh, when he first learned of the My Lai massacre, decided to investigate events the next town over.

Here’s what O’Reilly writes in his book about his report: when he finally arrived in Meanguera, “the place was leveled to the ground and fires were still smoldering. But even though the carnage was obviously recent, we saw no one live or dead. There was absolutely nobody around who could tell us what happened. I quickly did a stand-up amid the rubble and we got the hell out of there.”

He continues to emphasize his courage (writing that a Salvadoran military official said that he had “cojones” for having travelled to Meanguera). Then, having made it back to San Salvador safely, he filed his story: “I explained that while a scorched-earth policy was clearly in effect in remote village—the evidence was right there on tape—it was impossible to say just who was doing the scorching. Could be the muchachos [that is, the guerrillas], could be the government. The ninety-second package contained great video and a fairly impressive ‘on the scene in a very bad place’ stand-up by yours truly.”

O’Reilly tells a version of this story in two different books, since it supposedly captures a key moment in his personal narrative, a moment when he stood up to the “liberal establishment”—that is, CBS News—and eventually becomes who he is today. His editor apparently didn’t broadcast the report until O’Reilly forced him to do so.

I’ve located the broadcast and there are a number of problems with how O’Reilly tells the story in his book.

First off, Meanguera isn’t “leveled.” There are some knocked-down buildings, and a bit of rubble in front of which O’Reilly gives his “impressive” stand-up. But most of the town seems intact. No “smoldering” fires are to be seen. “We saw no one, alive or dead,” he writes. But I counted at least eight people who looked like residents of the town in the broadcast, going about their business. Also, the clip makes clear that O’Reilly actually got a fly-over helicopter tour of the region by the Salvadoran army, to survey infrastructure damage caused by the rebels—so at least part of his harrowing journey into “Indian Country” was at an altitude.

But, more importantly, as Bonner and Guillermoprieto (and then, later, Danner and Binford) show, it was not “impossible” to say who was “doing the scorching.” The question is: Did O’Reilly intentionally deflect away from a war crime that implicated Reagan’s Central American policy, or was the deflection a result of his ignorance and laziness?

O’Reilly’s report captures the degeneration of post-Vietnam journalism. Bonner, Guillermoprieto, and Meiselas were operating under the old model, pioneered in Southeast Asia by correspondents like Neil Sheehan and Peter Arnett who questioned Washington’s version of events and did all that was necessary to get to the scene and get at the truth. In contrast, O’Reilly, whether he was whisked into Meanguera on a US-supplied helicopter or arrived overland, did, as he writes, a ninety-second “package”—a “stand-up” routine that largely confirmed the official story, as dictated by Enders and Abrams. Bonner was punished for his intrepidness. O’Reilly went on to transform cable TV.

In his memoir, O’Reilly said, of his reporting in El Salvador, that he “banished the fear from my mind.” “I learned a tremendous amount about the conflict and about myself. I could face a high-risk situation. It was a huge confidence builder.”