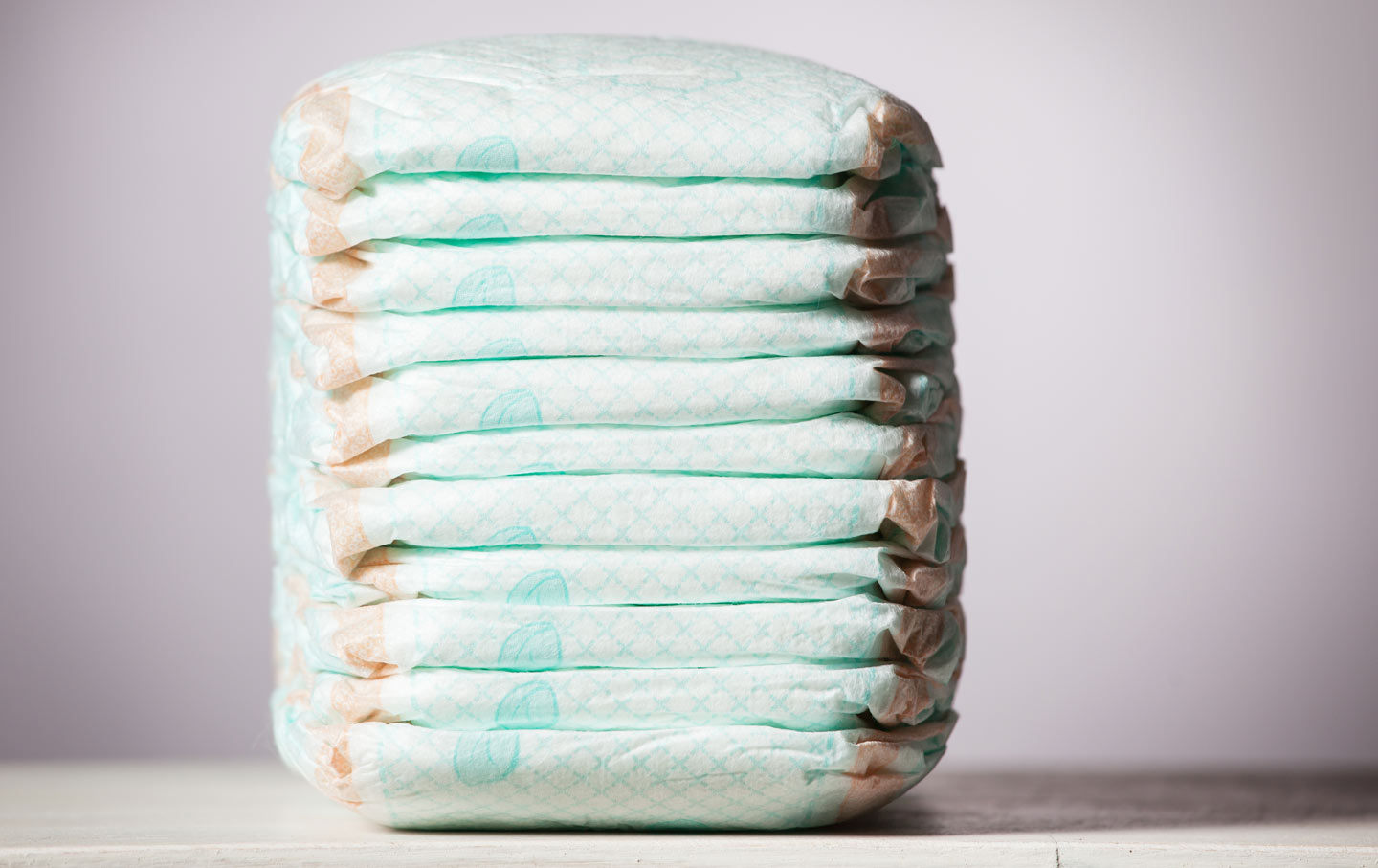 Washington officials might not agree on who deserves welfare, but it does manage to carve out a tiny soft spot for “women, infants, and children.” Even as other programs have been slashed, nutritional assistance for babies is one of the classic “milk for mother” entitlements that have generally survived the budget ax. Unfortunately, well-fed babies have to poop, and lawmakers don’t want to touch that.

Nationwide, diapers are persistently one of the costliest aspects of raising a baby, and like food, both cost and need are relatively inelastic; diapers cost parents about $70 to $80 monthly, averaging six to 10 diapers each day. But unlike food stamps, a federal entitlement, there’s zero government assistance for diapers.

Like breastfeeding and menstruation, taking care of diapers is seen as both redolent of an unsavory bodily function and a “woman’s problem,” to be handled privately, preferably out of public view.

Nationwide, diapers are persistently one of the costliest aspects of raising a baby.

But the welfare debate has grown more complex as women seek greater parity in the workforce and social policies are increasingly oriented toward addressing needs that the private sector fails to meet. A bill introduced last month by Senators Al Franken and Bob Casey, the Hygiene Assistance for Families of Infants and Toddlers Act, doesn’t lay out any money directly to subsidize diapers but would fund state pilot projects to help develop localized programs to provide diapers to families in need.

Currently about 5.2 million babies in the United States aged 3 or younger are living in households that struggle to pay for the basics, typically including diapers, according to National Diaper Bank Network (NDBN). Babies burn through about $940 worth of diapers annually—roughly a month’s rent or a year of cell-phone service. For the poorest fifth of the income ladder, about 14 percent of their wages, about $11,200 in 2014, went into diapers. According to a study published in Pediatrics, about 30 percent of mothers surveyed report struggling to pay for diapers—a greater level of need than the rate of food insecurity among children nationwide. But while hunger and poop are both facts of life, food stamps don’t cover the natural consequence of feeding your kids.

With nearly half of workers nationwide earning less than $15 an hour, and many ineligible for income supports and health insurance, a fresh diaper can become a luxury. Public healthcare programs do not address basic infant hygiene. While unmet diaper needs can be as unhealthy for kids as malnourishment, Medicaid (which typically provides prenatal care, childbirth coverage, and health-care for poor children) does not cover diapers except in cases of medically diagnosed incontinence. Yet inadequate changing can lead to costly medical problems like diaper dermatitis and urinary tract infections.

The nappy gap could be filled if parents simply had enough cash, but under federal Temporary Assistance for Needy Families (TANF), welfare-benefit levels have dwindled to barely cover housing, clothing, and food, so diaper needs remain ignored and, sadly, something that some overstressed mothers may try to scrimp on by going longer between diaper changes (rather than, say, skipping meals or getting evicted).

Unmet diaper needs can be as unhealthy for kids as malnourishment.

The dirty consequences go beyond the crib. The Pediatrics study showed that the prevalence of mental health issues were linked to reported diaper need. The diaper deficit was worse for “grandparents raising grandchildren and for Hispanic women”—perhaps reflecting social barriers facing elder caregivers and immigrant families. Researchers concluded that government assistance for diapers could be “a tangible way of reducing parenting stress, a critical factor influencing child health and development.”

Diaper deficits add chaos to the daily struggle of juggling multiple low-wage gigs and welfare bureaucracies, leaving little room for playtime, especially amid the indignity of forcing a baby to wallow in her feces. The situation might strike middle-class parents as unconscionable, but when a single mom comes home from a night shift to realize she’s out of Pampers and the next paycheck doesn’t drop for two days, desperate measures are needed. According to researchers, to cope with diaper needs, about one in 10 diaper-poor mothers “reported that they borrow diapers or money from family or friends…. Almost 8 percent of women reported that they stretch the diapers they have when their supply is running short.” A tiny fraction used charity, like a church diaper bank.

Alison Weir, NDBN Chief of Policy and Research says via e-mail, “The erosion of TANF benefits over the last 20 years is the most likely culprit for why so many families now find themselves without enough diapers.” (The work requirements of welfare reform also make it hard to find time to change diapers). Just a quarter of families with children get any benefits at all, as many previously eligible families have been pushed off the welfare rolls. Restoring even the paltry benefits of a generation ago would require a major influx of funding. Diapers could be funded through other programs, such as the federal Community Development Block Grant, but lawmakers have whittled away all but the most basic health, childcare, and food benefits.

One publicly supported diaper program, San Francisco Diaper Bank, distributes diapers through local Family Resource Centers under the CalWORKS welfare program, for children under 3 years old (separately, pending state legislation would provide a $50 diaper voucher for infants). But the routine of fetching a diaper ration becomes one more task that low-income parents struggle to manage. Weir notes that “take up of the program has been slower than expected,” in part, it seems, because the centers have limited operating hours, which often “conflicted with work or school schedules, so parents were not able to pick up the diapers.”

And instead of Washington picking up the bill, lawmakers argue breathlessly about protecting the sanctity of life on Capitol Hill. The national diaper gap reflects the patriarchal messiness of welfare politics; how many senators have ever changed a diaper? But honoring the sanctity of families struggling to make ends meet demands that we tackle the messiest end of all.