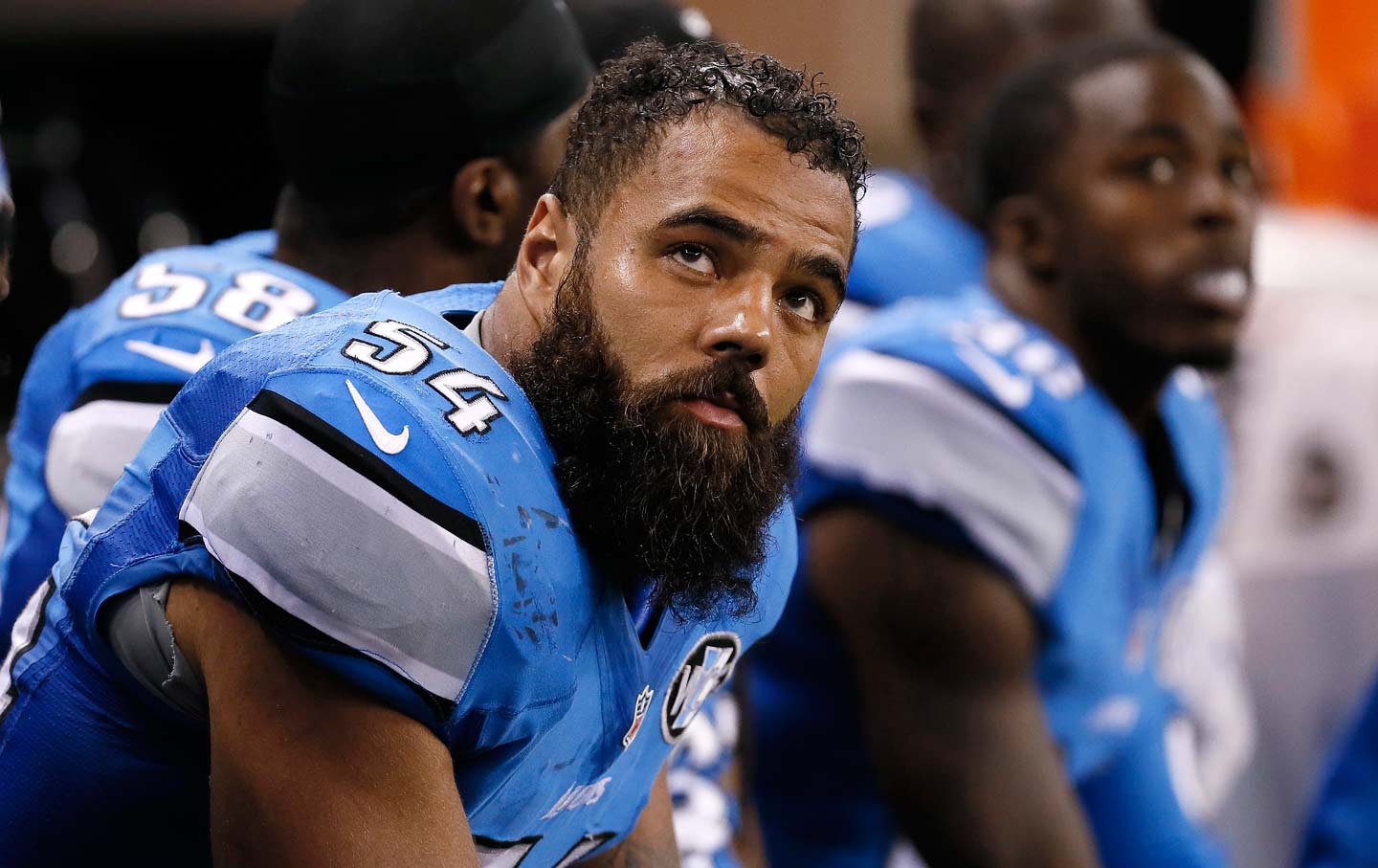 DeAndre Levy is a linebacker for the Detroit Lions who has been a stellar player since entering the league in 2009. But it was after the 2015 NFL season, in April, when his name became widely known, after writing an essay for The Players’ Tribune called “Man Up.” The piece was written on the heels of an announcement that Levy would be raising money to test 11,000 rape kits that were found in a warehouse, abandoned by Wayne County prosecutors.

The dehumanization and objectification of women are not issues that are specific to male athletes. They are societal problems. But they tend to be more associated with athletes in part because we are often idolized because of our athletic ability. In many ways, we’re considered models of masculinity, which is at the very root of a lot of these issues…I want to use my platform as an NFL linebacker to discuss how we talk about rape and sexual assault—because not enough men are.

I spoke to him about football and sexual assault. This is edited transcript. To listen to the full audio from my podcast Edge of Sports where I interview Levy, please click the link at the bottom of the piece.

Dave Zirin: What was your reaction when you heard that Donald Trump explained joking about sexual assault as being just “locker-room talk”?

DeAndre Levy: I don’t buy that. I feel like when you dismiss it as “locker-room talk,” the next step is dismissing the actual act. I think it’s something that needs to be addressed, something that we don’t really think about because it’s all normalized. It’s an idea that a lot of athletes have: entitlement—as Trump said—that you can do whatever you want when you’re famous.

A lot of athletes stepped forward to say that Trump’s boasts about sexual assault is not language they have ever heard in a locker room, but I know you think that it is more complicated than that.

Absolutely. I think, no one says “grab them by the pussy” or “you can do whatever you want, when you’re famous,” but that doesn’t take away from the way women are spoken of and referenced, not even just in the locker room, but also in predominantly male circles.

You had this great line in your “Man Up” piece, where you wrote:

It’s important for men, especially in a hyper-masculine culture that breeds so many assholes, to stand up and challenge the values that have been passed down to us. This is not just a woman’s problem.

It’s a great example of not being a bystander to rape culture. How would you handle it if, hypothetically, you had a teammate who spoke in the locker room like Donald Trump?

Secondly, you have to find a way to find out if this person is really doing this or not because if they are, then it’s not necessarily a one-time scenario. So, you have to see if there’s something really going on and try to take it to someone who can look into it and find answers.

When I was at school there were a lot of things going on that I never thought to question or see as a problem because it was so normalized. There were two specific instances where I would hear guys talking about things that happened, laughing and joking, even sharing photos.

Back then, at 18, I was unable to identify it as sexual assault. That really kind of sticks with me from a guilt standpoint. My lack of understanding and lack of education as a young person, a young male, shouldn’t be revealed in college. We need to prepare our boys better so they can go into these situations so we can stop things from happening. I think a very, very important part of why I’m writing and speaking out is to educate. Let’s bring awareness to this. Let’s teach our young boys better, instead of just teaching our women what not to do, which is asinine. We have to teach our boys. We have to let them know that they’re a part of culture, but they don’t have to be a part of that culture.

I can say that I never had an explicit conversation about the concept of “consent” until I was, maybe, 18 or 19 years old.

I didn’t really hear it until maybe my senior year of college. There’s a lot of things happening that don’t necessarily have to happen. It’s one thing to bring outsiders in to talk about, or see a commercial. But it’s very, very different to see men that you know, calling it out because we have so many men that hold it up and support it, like Donald Trump.

How would you handle it, if your team signed someone with a documented history of violence against women?

It can be tough. You don’t want to jeopardize your job with the team, but for me, I would have to question management and I would have to bring attention to it on a broader scale. I would also talk to the guy, try to get his side of the story, obviously you want to make a fair judgment. The problem is that right now we really don’t have a way to solve it. I don’t think suspending a person is necessarily a way to solve it, or labeling them an offender. We have to sit down and fix these problems with these people.

[But we can’t] prioritize a person’s ability to play football and sport over humanity. Like, he can help us win, but he’s a shitty person, so we’re keeping a shitty person within the culture. We are telling him it’s OK, we’ll still sign you and pay you.

This clearly hits you in a place that’s way beyond “this is my issue as an athlete.” Was it really just the fact that you were at Wisconsin and started thinking about this stuff or are there any more personal reasons why this sticks with you so hard?

It’s not just what I witnessed in college. It has also affected people that have been close to me. Throughout my life, there have been numerous people that have secretly suffered and you don’t even know about it. You don’t even realize it. I think once you see how prevalent of a problem it is and how we respond to it and how we treat survivors and people who are assaulted, it’s sickening. It’s kind of that you have to answer ‘Why do you want to stand against sexual assault and domestic violence?’

You contacted me, during Domestic Violence Awareness Month in the spring, and said “Let’s do an interview in October during Breast Cancer Awareness Month when players are wearing pink gear.” Why do you think it’s so important to center this discussion of domestic violence and sexual assault right when the NFL is doing this sort of very friendly for the cameras, everybody wear pink, “we love our female fans” kind of a moment?

That’s kind of the extent of the relationship with female fans from the NFL. We can sell them a bunch of pink gear in October and everything is all right. But it has to challenge the NFL. No doubt, breast cancer is something that’s very important that affects many women as well. I don’t want to make issues compete by any means, but imagine if we had guys wearing all purple [the color of Domestic Violence Awareness Month] and it keeps that conversation there, puts it in a kid’s head. That would open up the door for us to educate and let them know that a lot of things they hear, that they can challenge that. Once they’re educated and they can understand what it is, it gives them an opportunity to identify and stop it.

You’re partnering, right now, with the Detroit Hustles Harder clothing line to sell T-shirts that say simply, “Our Issue.” Can you explain what that means?

It’s just to open the conversation. People will see it and say, what’s “Our Issue”? Well, let’s talk about domestic violence and not dismiss it as a women’s issue but [take it on] as our issue, specifically as men and broadly as a society. All the money, right now, is going to Enough SAID to fund and process rape kits. Detroit had a backlog of 11,000 rape kits found in a warehouse in 2009.

It’s already tough enough for people to report. It’s under-reported for many reasons, and when they have the courage to go and report and try to have justice sought, it should be received. We have to do everything we can do to make sure that we’re affirming that we care about this issue.