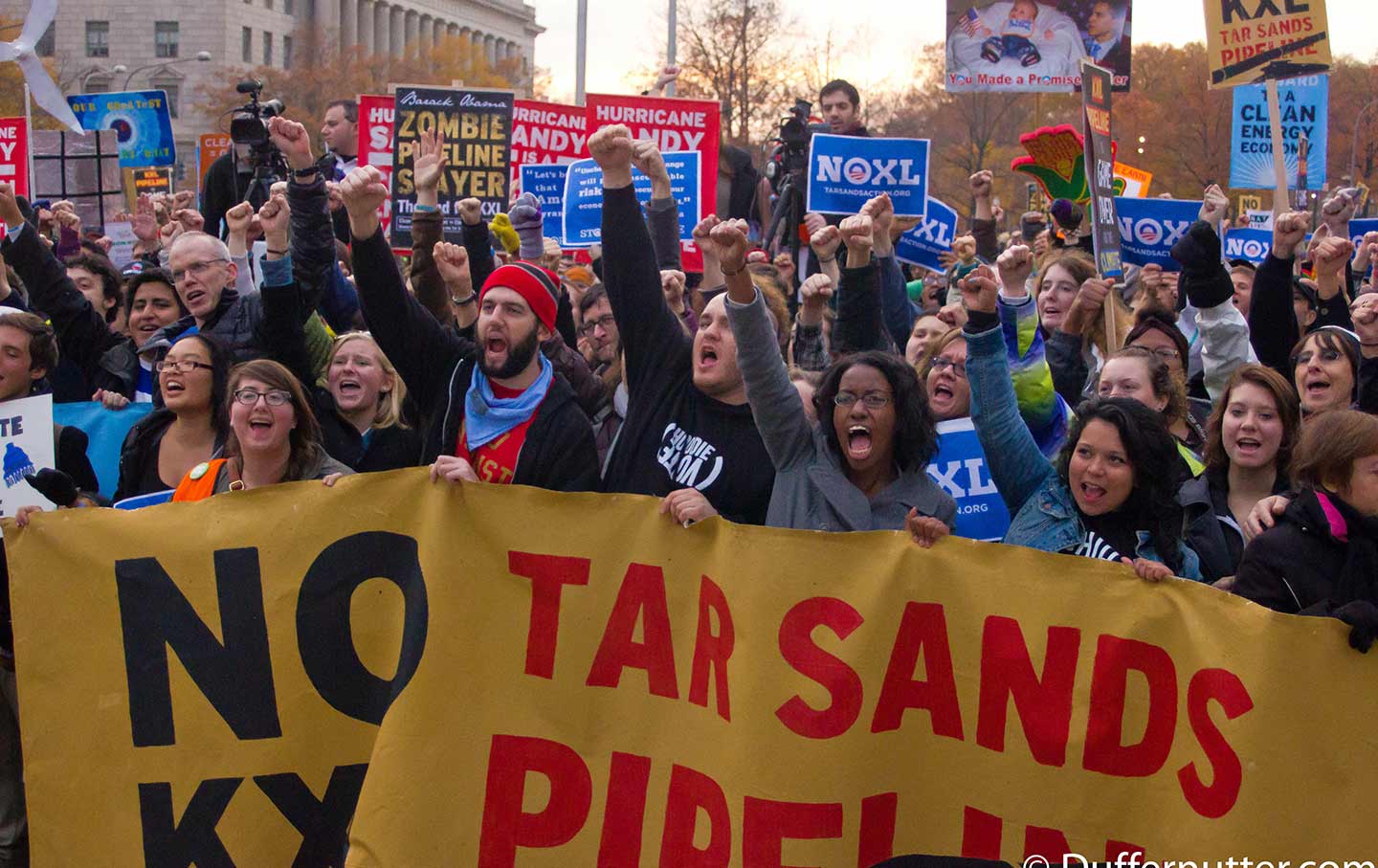 On Tuesday, most Senate Democrats voted “present” when Senate majority leader Mitch McConnell put forward a resolution on the Green New Deal, and four voted against it. The best way to combat McConnell’s attempted troll would have been to support the resolution, and it’s shameful senate Democrats backed away from a bold solution to climate change advanced by Representative Alexandria Ocasio-Cortez and Senator Ed Markey. Even Ocasio-Cortez urged senators to vote “present,” citing a lack of hearings, and Markey did so on his own resolution.

People want bold action on climate. In new polling from Data for Progress and 350 Action, we found that the Green New Deal policies to prevent further buildup of fossil-fuel infrastructure, as well as candidate pledges to refuse fossil-fuel contributions, have strong support among American voters.

We asked respondents if they would support or oppose a proposal “prohibiting new fossil fuel plants and pipelines when there are clean, renewable alternatives available?” Fifty-six percent of respondents support the policy as described, with only 26 percent opposed. We also tested a “Green New Deal,” which was described to respondents as a policy “in which the Federal government creates jobs and invests in low-income communities building energy efficient infrastructure, replacing lead water pipes, and updating America’s energy grid.”

We also tested support for rejecting fossil-fuel money. We found that 49 percent of voters support such a pledge and just 19 percent oppose it. Thirty-two percent don’t know or are undecided on the measure—suggesting that there is still room for activists, opinion-makers and lawmakers to move the public against the fossil fuel corporations that have polluted our planet, discourse and democracy.

These three policies: a Green New Deal, and end to fossil-fuel infrastructure and no more fossil fuel money in politics, should be a litmus test for all 2020 Democrats—and some, like Senators Kirsten Gillibrand, Bernie Sanders, Elizabeth Warren and Washington Governor Jay Inslee, have risen to the occasion, signing onto all three climate commitments. (All those senators still voted ‘present’ this week.)

The Green New Deal frame is popular because it signals ambitious federal climate action against polluters, along with transformative clean energy investments that would center working people and front-line communities victimized by extractive industries. Climate-justice advocates have successfully pushed for the inclusion of language that includes mandates to invest in low-income communities and to recognize and strengthen tribal sovereignty. This frame captures a sea change in climate activism that builds out a way to decarbonize the economy while uplifting the longstanding leadership of grassroots activists and their fight for economic, climate, and environmental justice across America.

The Green New Deal would commit the United States, for the first time, to the international standard of Free Prior Informed Consent, ensuring that development is done with full respect to Indigenous and treaty rights—which would avert the injustice perpetuated by projects like Keystone XL and Dakota Access.

Environmental justice leaders have urged a “just transition” for the communities polluted and left behind by the fossil-fuel economy. And that includes fossil-fuel workers who would benefit from investments in clean-energy jobs. Also, there’s help for those that live in the pathways of exhaust, lead-infested waterways and homes adjacent to plume-pumping factories.

While political leaders in Washington are hitting the snooze button, nationwide grassroots leaders, rooted in the Jemez Principles for Democratic Organizing, are pushing measures and community organizing agreements to move the nation away from fossil fuels and toward clean energy solutions while creating jobs and justice for working families and frontline communities.

The NY Renews coalition has been advocating for a Green New Deal style piece of legislation, the Climate and Community Protection Act, that is among the most ambitious climate policies moving at the state level, including legally enforceable mandates that target all emissions sources, including buildings and industry. It also includes guarantees that investments will be directed to low-income front-line communities.

Together, organizers in Buffalo, New York, and in Washington State are seeking to bring labor, environmental and racial-justice groups to form political alliances to get proposals that center climate, jobs, and justice introduced and passed. Of course, the spending power of dirty-energy lobbyists and donors looms large. But the Green New Deal seeks to recharge the people powering these efforts on the ground in cities, towns, and communities across the country.

Congress should embrace bold ideas for federal policy action and channel the energies of this remarkable grassroots organizing. With a decade left to take action on perhaps the greatest challenge in human history, the sexagenarian Senate should know better. We must untether ourselves from the morally bankrupt fossil-fuel industry’s clenched fist suffocating our present and our children’s future.

We can stave off the destruction of our planet while setting out to transform the economy to work for all of us. The Green New Deal resolution is not meant to become law. It’s meant to establish broad principles that challenge the orthodoxy of can’t-do attitudes, in the face of a totalizing catastrophe that is—from Puerto Rico to Pine Ridge—already upon us.

Senate Democrats have a mandate to pursue a Green New Deal—the numbers are clear. Their ginger backtracking imperils all of us. They should do their job.