If 84 percent of the people who voted Democratic in 2016 come back out and vote Democratic again in 2018, Democrats should be able to reclaim control of the House of Representatives. There is also a narrower path to recapturing control of the Senate, but that’s a topic for a future column (spoiler alert, the Senate path requires massive investment in and mobilization of Latinos in Nevada, Arizona, and Texas). The results of the special elections in Kansas and Georgia have highlighted the path to victory in House races, but in order to seize this opportunity, progressives must focus their time, energy, and money on organizing and mobilizing core Democratic voters rather than squandering precious time and resources trying to convince Trump voters of the error of their ways.1

Democrats need a net pickup of 24 House seats to retake control, and there are 23 Republican incumbents in congressional districts that were won by Hillary Clinton in November. There are another five seats where Clinton came within 2 percent of winning. Those 28 districts hold the key to retaking control of that chamber.2 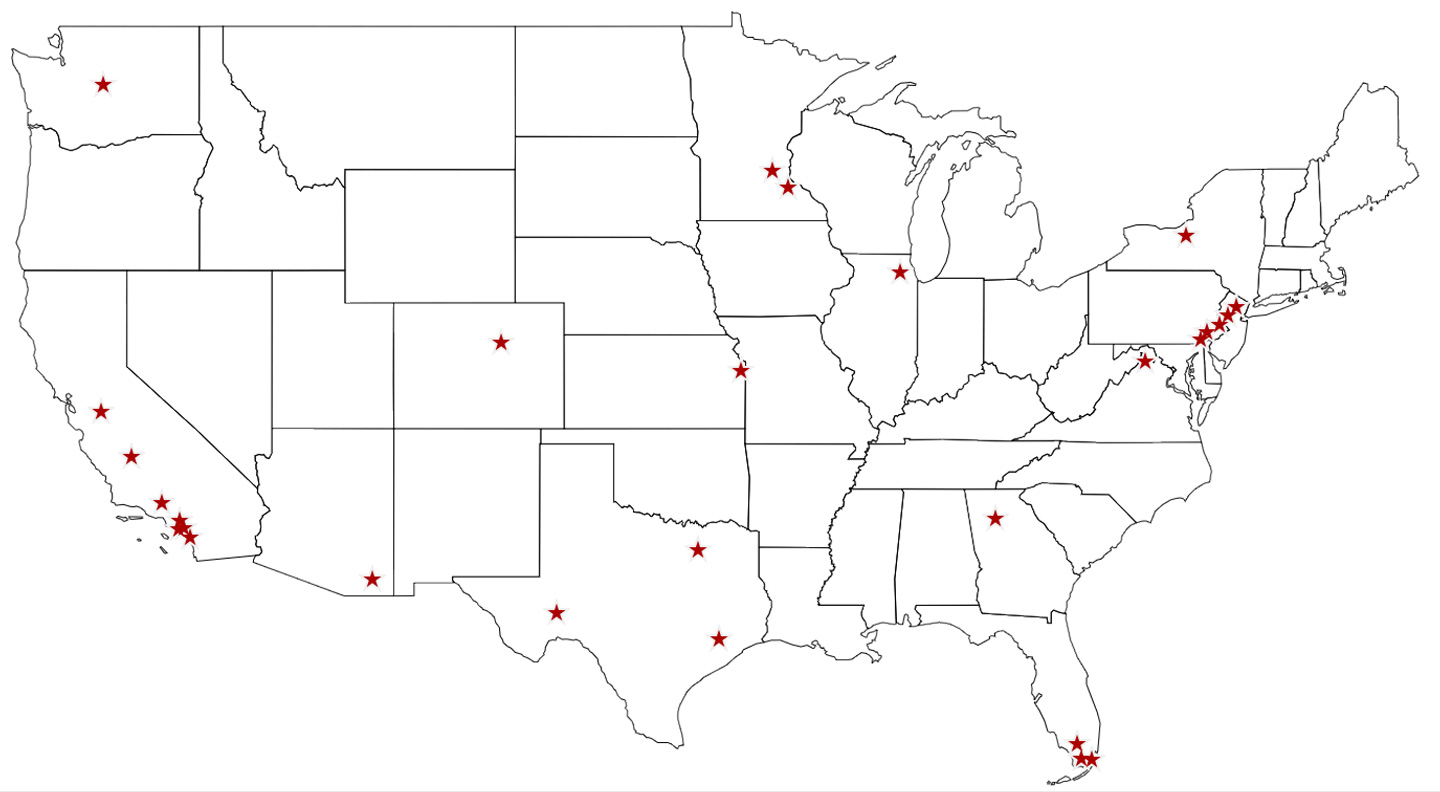 The opportunity of the hour stems from the fact that the party that holds the White House historically has frequently had lower turnout in the midterm elections that immediately follow the presidential election. This makes sense; it is easy for complacency to set in after your team has won the biggest prize in politics. Conservatives and Republicans got what they wanted in 2016. They no longer have the bogeyman of a black man in the White House, and the fury of opposition is not present to the degree it was when they came out in large numbers to voice opposition to all things Obama.3

The diminished enthusiasm of Republican voters became markedly apparent in the recent special elections for vacant House seats in Kansas and Georgia over the past two weeks. In Kansas, Republican voter turnout declined by 62 percent while Democratic turnout fell just 32 percent. In the Georgia special election the following week, the pattern persisted with Republican turnout dropping 51 percent, twice the falloff of Democratic voters whose participation receded by just 25 percent.4

This combination of out-of-power-party motivation and in-power-party complacency is consistent with historical trends. During the midterm election of 2006, when George W. Bush was president, Republican voter turnout dropped by 20 million people from the number that turned out for the prior presidential election. Democratic turnout dipped by just 10 million people, flipping enough seats for Democrats to take control and make Nancy Pelosi speaker of the House. Similarly, when Democrats won the White House in 2008, the subsequent midterm election saw 26 million Democratic voters stay home, while Republican turnout dropped by just 7 million.5

The path back to power in 2018, then, requires massive mobilization and organization of those Democratic voters who cast ballots in 2016. At its most basic, the task is getting enough Democrats to vote so that that number is greater than the number of Republicans who vote. Simple as this sounds, it is a concept that eludes many pundits and consultants.6

The results in both of the recent special elections were surprising to many journalists who thought that Democrats didn’t have a chance in what had historically been reliably Republican districts. But the conventional wisdom is founded on faulty analysis and an incorrect understanding of percentages.7

The essential mathematical concept that a shockingly large number of people in politics fail to understand is the difference between percentages and raw numbers. Reporters see that Tom Price, a Republican, received 60 percent of the vote in 2016 in the Georgia’s Sixth Congressional District and quickly conclude that the district is conservative. Percentages, however, are only of limited analytical utility (for example, if a stock price increases by 10 percent, that means a whole lot more to somebody who has a billion dollars of that stock—a $100 million increase in wealth—than it does to somebody who only has $100 and gets a bump of just $10).8

What the percentages masked in Georgia is that while the Democrat only received 38 percent of the vote in that district in 2016, that 38 percent equals 125,000 people. If Jon Ossoff had gotten 97,000 votes in the first round, we would now be calling him congressman (and we may yet have that pleasure if his campaign mobilizes the core Democrats in the district in June). As it was, Ossoff received 92,000 votes and nearly pulled off the outright win.9

This situation of high Democratic turnout making seats competitive enough to flip will replicate itself across the country heading into the 2018 midterm elections. If Republican turnout does fall significantly—as it has in the special elections and as it did during the last Republican presidential administration—then Democrats have a golden opportunity. Presuming a Republican decline of 36 percent—as occurred in 2006 during Bush’s presidency—then Democrats only need to get, on average, 84 percent of those who came out in 2016 to vote again in 2018.10

The following table shows the precise percentages of the 2016 Democratic voters necessary that would have to come back out and vote again in order to flip each of the 28 districts that are in reach in 2018.11 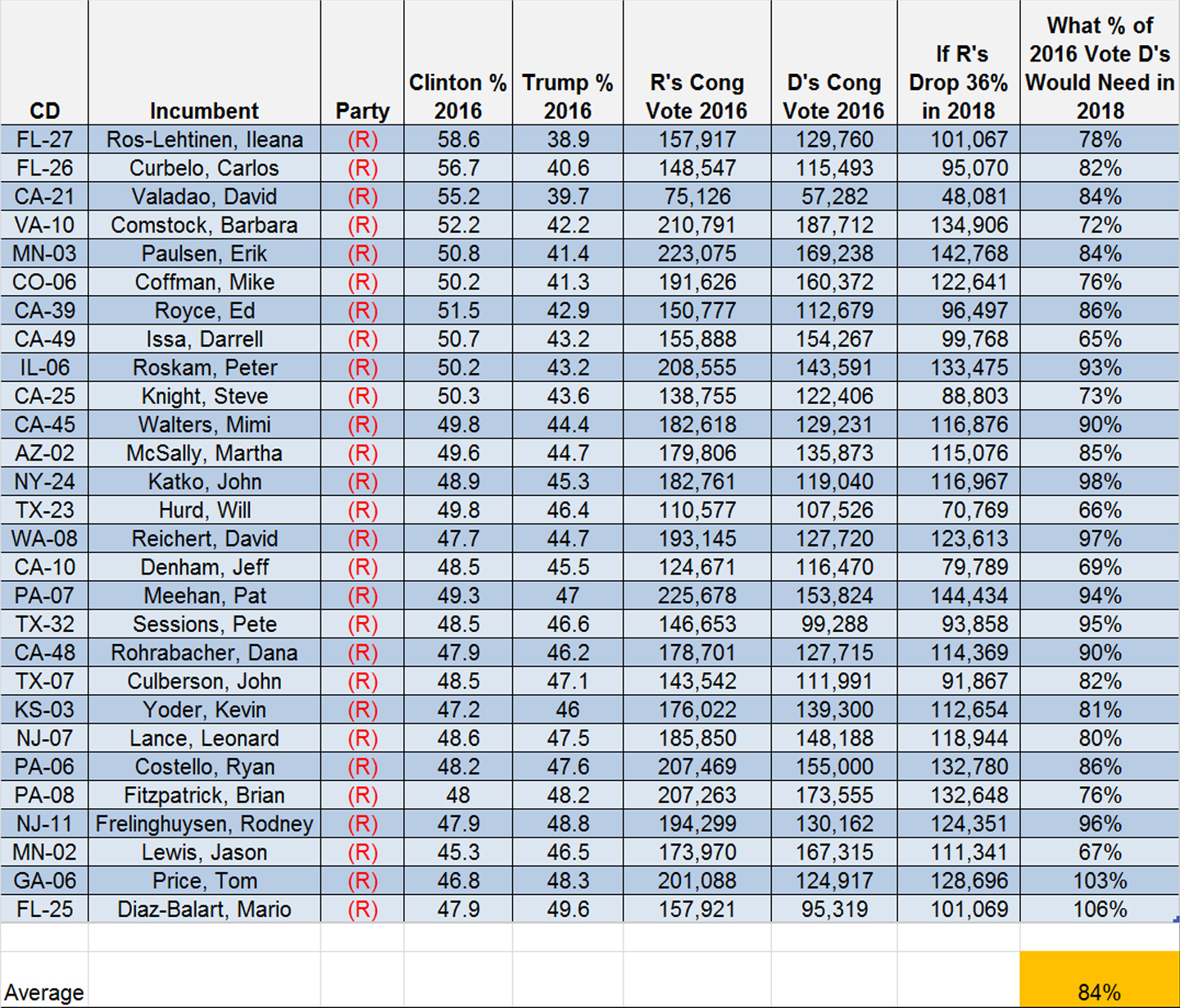 You will note that in this lower-turnout scenario, in 26 of the districts—more than the number needed to take back control of the House—Democrats don’t need to win over one single Trump voter in order to take back each of these seats. It is completely a question of whether we get the Democrats who voted in 2016 to come back out again in 2018. Furthermore, in many of these districts, there are tens of thousands of eligible people of color—the most Democratic voters of all—who are not registered to vote. Each one of those voters of color who is registered and mobilized gets us one step closer to victory.12

The DCCC, the DNC, Indivisible, NextGen Climate, and every other progressive organization and individual activist trying to figure out “what can I do?” should support efforts to ensure high Democratic turnout in 2018 (and in the upcoming 2017 special elections). Such is the strategic imperative, indeed the moral imperative, of any and all who seek to seize control of the House of Representatives from the Republicans who are hell-bent on destroying the planet and imperiling most of the people on it.13