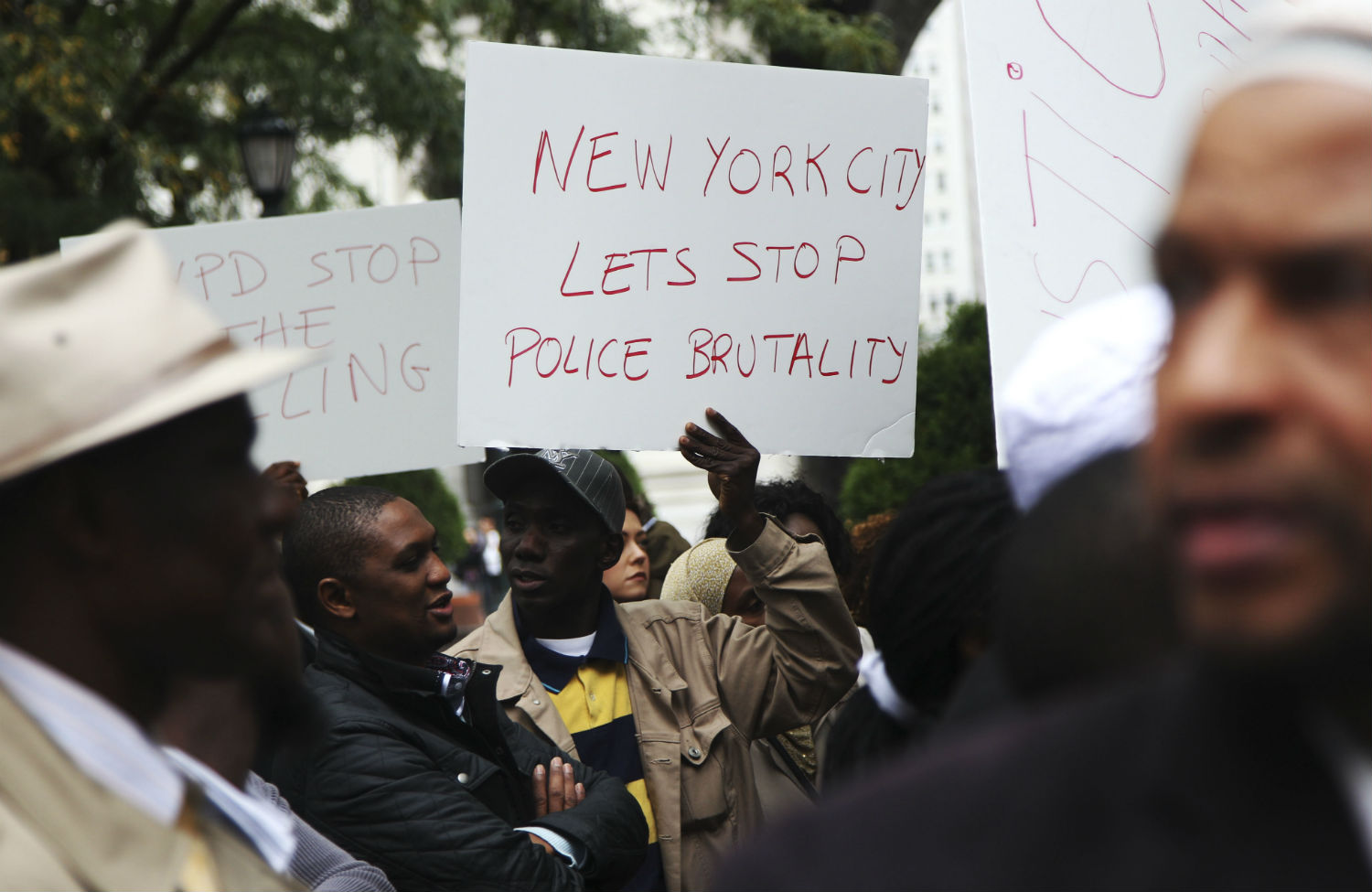 Protesters at a rally against police brutality in 2012. (AP Photo/Seth Wenig)

No one should have to bury a loved one because of violence.

That goes for the families of Oscar Grant, Trayvon Martin, Aiyanna Stanley-Jones, Renisha McBride, Jordan Davis, Islan Nettles, Eric Garner, and Wenjian Liu and Rafael Ramos, the two NYPD officers killed on Saturday in Brooklyn. Ismaaiyl Abdulah Brinsley, the man who shot Liu and Ramos, traveled up to New York City from Baltimore, where earlier that day he shot his ex-girlfriend, Shaneka Thompson, in her home (Thompson is expected to survive). After shooting Liu and Ramos, Brinsley went to a nearby subway station and killed himself.

The entire chain of events is tragic. Brinsley’s heinous actions have been condemned from all corners. But that hasn’t stopped some people from placing the blame for Liu and Ramos’s death on the current nationwide anti-police brutality movement, flying under the banner “Black Lives Matter.”

“There is blood on many hands,” said Patrick Lynch, president of the Patrolmen’s Benevolent Association, “from those that incited violence under the guise of protest to try to tear down what police officers do every day.” Former New York City mayor Rudy Giuliani, in an appearance on Fox News, said, “We’ve had four months of propaganda starting with the president that everybody should hate the police. The protests are being embraced, the protests are being encouraged. The protests, even the ones that don’t lead to violence, a lot of them lead to violence, all of them lead to a conclusion. The police are bad, the police are racist. That is completely wrong.”

The organizers responsible for the anti-brutality protests—which began in the wake of the August 9 killing of Michael Brown by (now former) Ferguson police officer Darren Wilson in Missouri, grew after a grand jury decided not to indict Wilson, and grew larger still when a grand jury in New York voted not to indict Officer Daniel Pantaleo for the July 17 killing of Eric Garner—reject these connections. In a statement, a group of organizers known as Ferguson Action said:

We are shocked and saddened by the news of two NYPD officers killed today in Brooklyn. We mourned with the families of Eric Garner and Mike Brown who experienced unspeakable loss, and similarly our hearts go out to the families of these officers who are now experiencing that same grief. They deserve all of our prayers.

Unfortunately, there have been attempts to draw misleading connections between this movement and today’s tragic events. Millions have stood together in acts of non-violent civil disobedience, one of the cornerstones of our democracy. It is irresponsible to draw connections between this movement and the actions of a troubled man who took the lives of these officers and attempted to take the life of his ex-partner, before ultimately taking his own. Today’s events are a tragedy in their own right. To conflate them with the brave activism of millions of people across the country is nothing short of cheap political punditry.

In a separate statement, #BlackLivesMatter echoed those sentiments and added:

At the heart of our movement work is a deep and profound love for our people, and we are rooted in the belief that Black people in the U.S. must reassert our right to live be well in a country where our lives have been deemed valueless. Together, we champion a complete transformation of the ways we see and relate to one another.

Our movement, grown from the love for our people and for all people, will continue to advance our vision of justice for all of us. Let’s hold each other close as we work together to end violence in our communities—once and for all.

The rhetoric Lynch, Giuliani and others employ only reinforces the message protesters have been trying to get across. Lynch and Giuliani can see the tragedy of Liu and Ramos’s deaths, but do not extend that same sympathy to the families of those killed by police officers. The lives of officers Liu and Ramos are held up as more valuable than the lives of Garner, Brown and so on. That’s the reason the protests must continue, despite Mayor Bill de Blasio’s call for them to be suspended.

But also, you’d have a hard time convincing me that the reason Lynch and Giuliani mourn Liu and Ramos is because of their humanity. By all accounts, Liu and Ramos were well-liked members of their community, but that’s not what has inspired Lynch to attribute the violence that killed them to nonviolent protesters. Liu and Ramos were police officers. Their jobs represent institutional power. The protests are a challenge/threat to that power.

The protests are not meant to be a challenge/threat to the lives of police officers, which is why it is disingenuous to link the actions of Brinsley to the movement. Activists, organizers, protesters involved in this fight for justice are not looking for more blood in the streets. They are seeking an upheaval of the American system of racism.

And yes, that directly implicates the police. The police are a violent and racist arm of oppression. That’s not because every person hired to be a police officer is a violent racist. It’s simply the job they’ve been given by the American people.

The rejoinder to that assertion is typically some form of “not all police are bad/there are good cops.” There are certainly good people who are police officers. But good people sign up to do terrible jobs every day. They don’t, however, deserve to be killed for doing so.

As such, we all should mourn the deaths of Liu and Ramos, as well as send supportive energy to a recovering Shaneka Thompson, whose shooting has been lost in all of this. But that mourning doesn’t mean we become less critical of the police as a violent and racist tool of oppression.