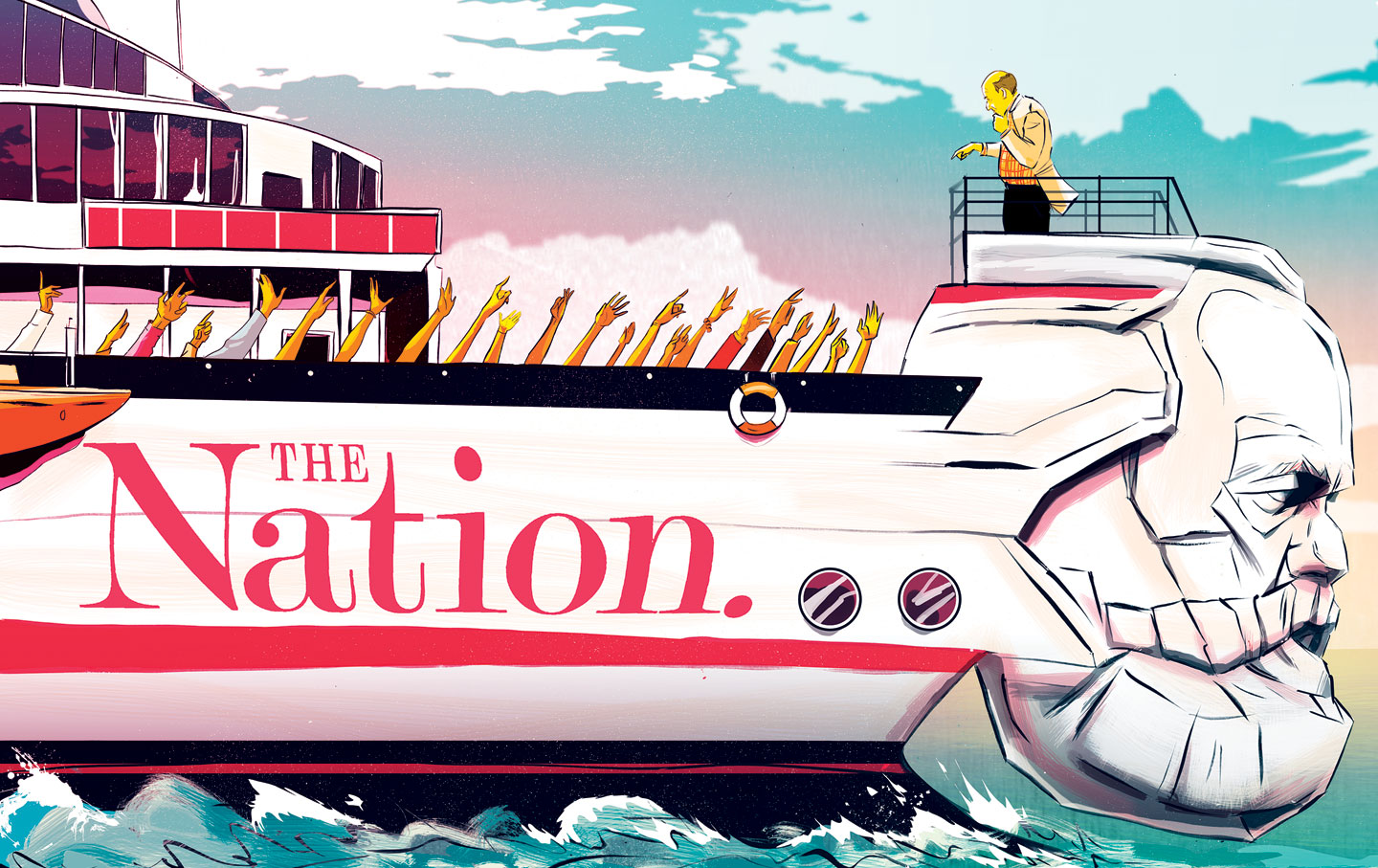 On a Nation cruise, the maritime adventure I usually refer to as “Lefties at Sea,” I used to take it for granted that some of the guests were not completely comfortable with my presence as a panelist. Although I’ve been writing for The Nation since 1978—that’s when the then-editor became known as “the wily and parsimonious Victor S. Navasky” for offering me a per-column fee of “something in the high two figures”—there has always been some feeling among longtime subscribers that I am not completely, well, on board. For years, after all, I answered questions about why I wrote for The Nation by saying, “It’s the closest magazine to my house.” In my column, I pointed out that The Nation is published only every other week during the summer months, even though the downtrodden are oppressed every day of the year. On a television talk-show once, I recalled an exchange I’d had with a newspaper reporter who, during the promotional tour for a collection of my Nation columns, asked me to describe the magazine.

“Pinko,” I said, after some reflection.

“Surely you have more to say about it than that,” the reporter countered.

“Yes,” I replied. “It’s a pinko magazine printed on very cheap paper—the sort of magazine where, if you Xerox one of your pieces, the Xerox is a lot better than the original.”

A week or so later, I got a ferocious letter from a Nation reader who had been outraged that I would say something on national television that gave comfort to the enemy. I wasn’t surprised. I’d always taken it for granted that one portion of the readership was troubled not only by my smart-aleck remarks, but also by the suspicion that I was the sort of person who had let the agony of the Scottsboro Boys fade from his memory. As a stand-in for those readers, I included a character in my column called Harold the Committed, who was always asking me whether I’d like to see the world as we know it destroyed in a nuclear holocaust (“No, not really, Harold”) or suggesting that one of my daughters go to the Greenwich Village Halloween Parade as “the dangers posed to our society by the military-industrial complex” (“Harold, I don’t think we have anybody at home who can sew that well”).

But the 400 people who actually went on the first Nation cruise—which was also the first cruise I attended as one of the panelists—did not appear to be angry with me at all, except for the woman who upbraided me over my failure to call on her when, as the moderator of a panel, I had asked for questions from the floor. “Why don’t you people ever call on anyone in the balcony?” she demanded, confronting me as I left the stage. “What is your bias against the balcony?” Ever since then, in the spirit of the political discussions common to Nation cruises, I’ve thought of the people she represented as the balconistas or “the balconite faction.”

I’ve had a similar paucity of vitriol directed at me on the cruises I’ve gone on since. Although the wily and parsimonious Victor S. Navasky (or “the Old W&P,” as his intimates now call him) has retired as editor of The Nation, he continues to preside over the annual cruises. If the cruise-ship passengers he snares are a fair sampling, Nation readers are nowhere near as solemn as Harold the Committed.

They laughed when another panelist, the late and sorely missed Molly Ivins, referred casually to the comfortable group gathered before her amidst the faux luxury of the cruise ship’s theater as “the vanguard of the proletariat.” On another occasion, they at least chuckled politely when I said that in speeches around the country, I used to describe the circulation of The Nation as “600 librarians and eight unreconstructed old Trotskyites”—although a considerate fellow panelist took me aside afterward to explain that the reason some people in the audience might have seemed puzzled rather than entertained by my remark was that, in the sectarian disputes of the 1930s, The Nation and the Trotskyites had, in fact, been bitter enemies. (I was grateful for that information, although I’ve since begun to wonder about the identity of all those codgers who approached me after speeches and explained their loyalty to The Nation by saying, in the friendliest sort of way, “I’m one of those eight unreconstructed old Trotskyites you mentioned.”)

The audience did not seem offended when I said, as a way of taking note of the chest congestion I was contending with while trying to moderate a panel: “I want to reassure everyone on one point. When someone gets a respiratory ailment in a closed, air-conditioned environment, the first thing that comes to mind, of course, is Legionnaires’ disease. You should know that I phoned the headquarters of the American Legion, in Indianapolis, this morning, and they informed me that this crowd would not be allowed to have Legionnaires’ disease. Maybe Abraham Lincoln Brigade disease.” That evening, by chance, I sat at dinner with a man who actually had fought in the Abraham Lincoln Brigade.

He turned out to be someone who had some good stories and some strongly held political views—a description that fits a lot of the people I’ve met on the cruises. Shyness and reticence are not rampant among them. When the moderator of a panel calls for questions from the floor, just about every hand in the room seems to go up—the sheer number of hands being waved was my excuse, feeble as it must have sounded, for not calling on the woman who upbraided me—and often the only interrogatory aspect of the “question” is a tagged-on “Don’t you think?” These days, when I’m serving as moderator, I’m always careful to call first on someone in the balcony. Having learned my lesson, I have no desire to incur the wrath of the balconistas.