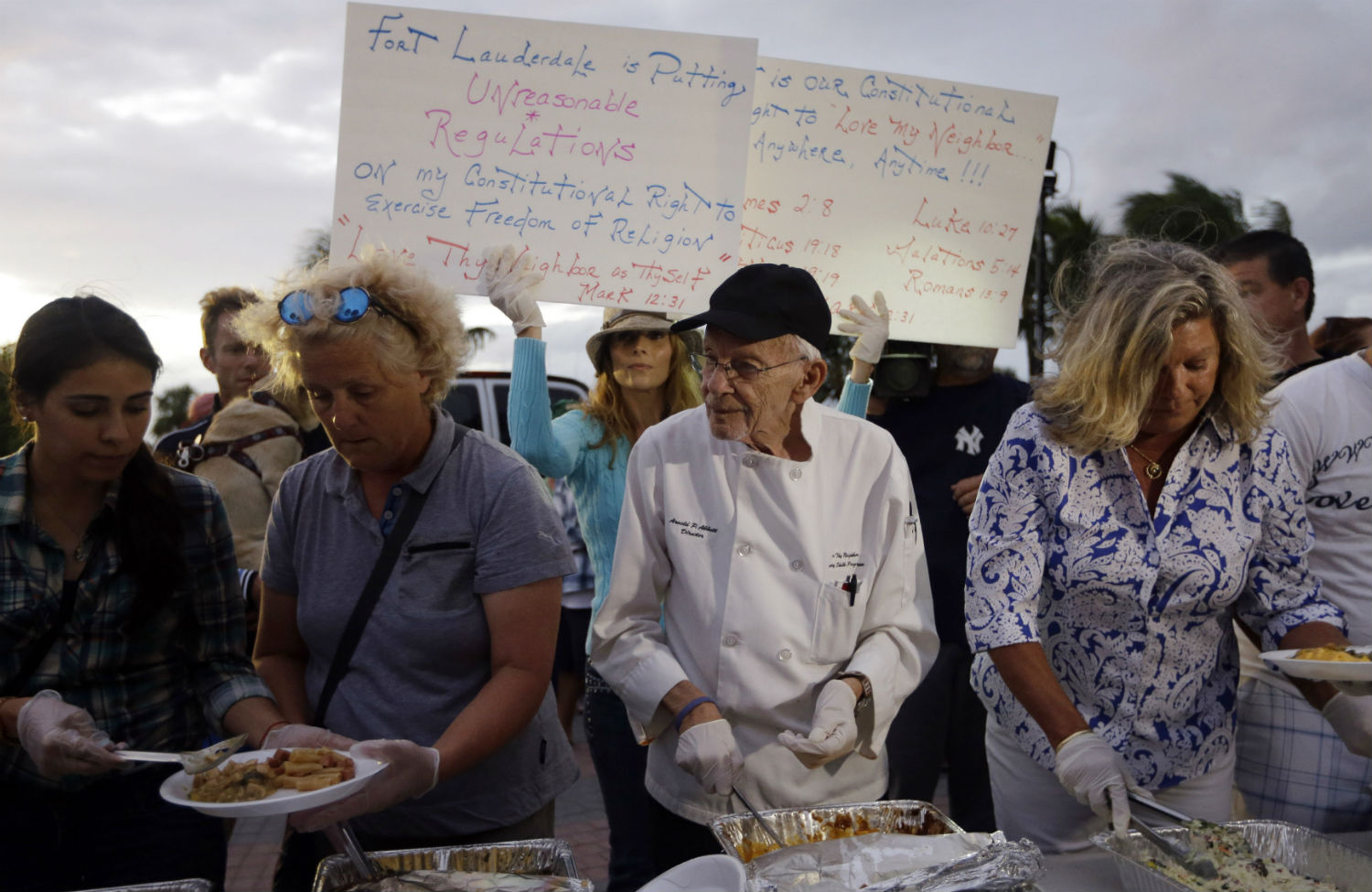 Homeless advocate Arnold Abbott, 90, serves food to the homeless with the help of volunteers on November 5, 2014, in Fort Lauderdale, Florida. (AP Photo/Lynne Sladky)

Governing public space often boils down to basic social discipline. Some cities try to reduce littering by removing trash cans—thus limiting people’s options for tossing garbage in public. And some cities now apply this rationale to homelessness: by passing laws that bar homeless people from public places. Fort Lauderdale has taken this social engineering to its logical extreme by restricting “food distribution,” effectively giving those who help the homeless no place to feed them—because all that free food only encourages public displays of hunger.

But Fort Lauderdale’s Food Not Bombs activists say the real crime is a ban on acts of public generosity. The punk-inspired grassroots group just bit back with a lawsuit fighting for their right to engage in weekly demonstrations to promote peace and social welfare, and to illustrate this communal ethos by distributing morsels to bystanders in need. They assert that their modest gesture in Stranahan Park is an exercise in free expression.

Fort Lauderdale’s ordinance restricting food distribution in public was passed last October in an effort to, according to city officials, manage use of the park, deter behavior that “enables” homelessness and to “ensure food safety and health”—evidently by keeping free food safely out of the hands of the hungry.

But the city made international headlines by nabbing an activist with a local organization, fittingly called Love thy Neighbor, as they distributed meals. The 90-year-old humanitarian Arnold Abbott proclaimed at the time, “you cannot sweep the homeless under a rug…. There is no rug large enough for that.”

According to a survey of more than 180 cities by the National Law Center on Homelessness & Poverty, anti-homeless laws pervade urban spaces nationwide. Roughly a third of cities barred public “camping,” for example, up 60 percent since 2011. Restrictions range from prohibiting sitting on sidewalks to imposing steep fees or regulations that effectively criminalize actions of charity groups, often using antiseptic “quality of life” terms (a tent pitched under a bridge becomes an unauthorized “camp”). Palo Alto has banned sleeping in parked cars. Mobile has imposed zero-tolerance on “aggressive panhandling,” which could involve just “request[ing] a donation from a person standing in line…no matter how mildly the request was made.” Last year, ThinkProgress reported, Fort Lauderdale authorized police to bust people who “store possessions” on public property—suggesting that homeless people don’t deserve to have what little they carry with them, let alone “quality of life.”

As the turf war over the commons moves from park to courtroom, Fort Lauderdale Food Not Bombs and members Nathan Pim, Jillian Pim, Haylee Becker, and William Toole argue on First Amendment grounds that the law curbs their free expression by barring the symbolic act of food sharing.

Lead counsel Kirsten Clanton, with Southern Legal Counsel, tells The Nation the group’s protest are political actions by showing “they believe that our society can end hunger and poverty if our resources are directed from the military and war towards meeting basic human needs, like food…. they share food with anyone who is hungry, as an expression of that political message. And the city has now said that is now a crime.”

The lawsuit claims Fort Lauderdale’s ordinance amounts to a de facto ban, as it goes beyond a regular permit or fee regulation, and explicitly and unjustly establishes prohibitive conditions on community groups that make it impossible to lawfully distribute food (e.g., only to strangers, not friends):

The Park Rule requires “written agreement” to share food, but lacks any process to obtain it or standards to guide decisions about whether to grant or deny permission and under what conditions. Revealing the lack of even any rational basis for this regulation, the same park rules allow picnics to take place without City permission.

The underlying question is what exact social harm to the city, which boasts of offering alternative programs to aid the homeless, is posed by these gatherings (which involve displaying signs and items with “anti-war and human rights messages” in addition to giving out free food). The police crackdown ironically speaks to the principle behind Food Not Bombs: our society spends too many resources on violent institutions instead of on caring for people.

And the point of these actions is to use the park freely, Clanton says, because the park is “a traditional public forum…a place that’s naturally open for us to express our First Amendment rights. There really has been a war on homelessness that has been targeted at moving homeless people out of public space. And that’s happening in Fort Lauderdale…and all over the country.”

The message is actually just a reiteration of the reality inscribed on the transient bodies strewn about local streets and shelters. Many of Broward County’s homeless (estimated at about 2766 or 900 unsheltered a day) are people who suffer from substance-abuse issues, mental illness, or emotional damage from trauma and war. Many homeless families are unable to secure affordable housing and are often shut out of the crowded shelter system.

The law’s very logic, activists say, is based on narrow regressive assumptions about how the act of sharing food is not really just a community service but somehow a perverse reward for a poor lifestyle choice. (The ordinance states that free-food provision “by its very nature” has “serious objectionable characteristics.”)

In seeking to reduce homelessness by restricting community groups seeking to alleviate and raise consciousness about the issue, the city is erasing evidence of suffering and rendering the homeless themselves invisible. It’s a mode of urban demographic control hearkening back to the Victorian and Progressive Era “vice” and “nuisance” regulations based on notions of bourgeois propriety, which evolved into policies that pushed the poor to society’s physical and psychological margins, and deepened patterns of segregation.

But the poor will always be with us, even when we try not to see them. The city’s activists aren’t just feeding the needy; their political action deliberately employs public space to lay bare the hypocrisy of a modern city harboring barbaric poverty at its core, revealing the scourge of inequality eating at the edges of the public square.