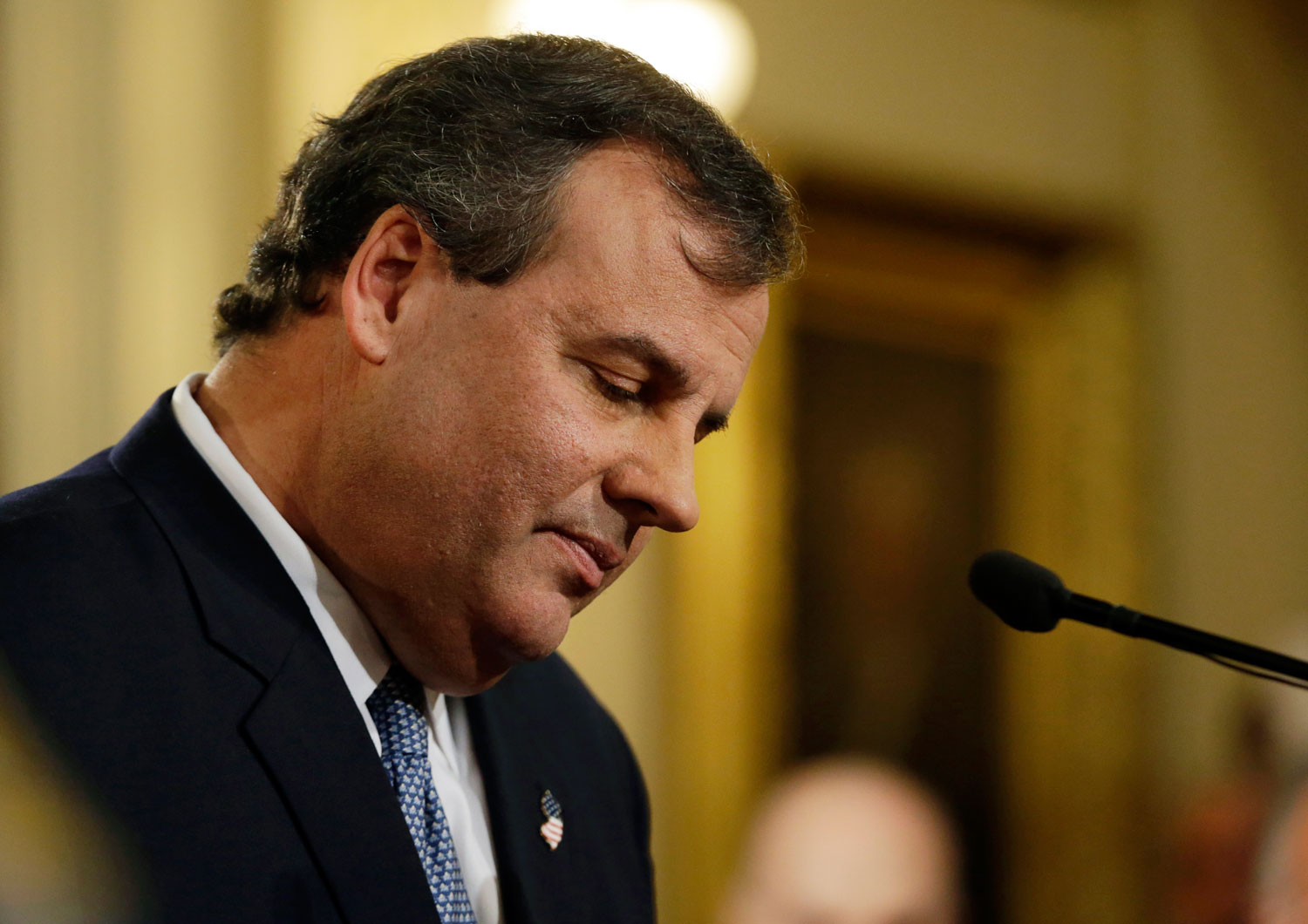 New Jersey Governor Chris Christie mounted what the New York Daily News aptly termed a “pathetic” defense amid the growing scandal arising from the abuses of power that gridlocked access lanes to the world’s busiest motor vehicle bridge. In the wake of his claim that he had been “betrayed” by his closest aides, his campaign manager and his appointees, there were still some politicians and pundits who imagined Christie might be a presidential prospect. But as Thomas Kean, a former New Jersey governor and a Republican elder statesman who was once Christie’s mentor, said, “You look at [his governing style] and ask, do you really want that in your president?”

The ultimate answer will be no. Even before the September lane blockages in Fort Lee were recognized as an act of political payback, it was clear to anyone paying attention that Christie had earned what 2013 Democratic gubernatorial nominee Barbara Buono referred to as his “reputation for utilizing the levers of power to exact political revenge.” National Democrats let Buono down in her challenge to Christie, failing to provide her with the resources and support that might have opened up a real debate about the governor’s abuse of power. These days, however, there is growing acceptance that Buono is onto something when she says, “He’s somebody who wants to lead our nation and be the chief executive over the largest, the most powerful, military force in the world. And he can’t be trusted to manage the busiest bridge in the world.”

Whether Christie is simply a bad manager who hires horribly, or a far more seriously flawed figure, is the subject of intense debate. As New Jersey Senate majority leader Loretta Weinberg said several days after the governor’s marathon press conference, “The issue has grown, and the unanswered questions have multiplied.” Weinberg, a Democrat, represents the region that was gridlocked and has taken the lead in demanding a full inquiry. New Jersey’s Senate president, Steve Sweeney, was wise to name the veteran legislator to lead a bipartisan special Senate committee with subpoena power and a charge “to get to the bottom” of the scandal. The New Jersey Assembly has moved to expand an already opened probe, and the US Attorney for New Jersey has launched a “preliminary inquiry.” These state and federal investigations, along with belated media scrutiny, should reveal a good deal more about Christie. Whether or not his aides and allies ever face criminal charges or the governor himself becomes even further entangled in the scandal, it is hard to imagine that the revelations will improve an image so tarnished that Bruce Springsteen is singing parody songs about New Jersey’s payback politics.

Those who make apologies for Christie imagine that as long as it can’t be proved that he gave the order to block the bridge, the governor will remain a GOP front-runner among the church deacons of rural Iowa and the hockey moms of southern New Hampshire who vet party nominees. But the apologists are clinging to a fantasy that is rapidly degenerating into absurdity. This is about much more than partisanship or ideology. As they get a fuller sense of Christie, voters on the presidential campaign trail can be expected to reach the same conclusion as Richard Aregood, the Pulitzer Prize–winning former editorial page editor of the Philadelphia Daily News and the Newark Star-Ledger, who laughed off Christie’s claim that he was betrayed by his staffers and appointees. “Humbug,” wrote Aregood. “They were his people doing what they believed was his will. If they were incompetents, they were his handpicked incompetents, with whom he was perfectly content until the heat rose on his personal backside.”

The open question is whether this is what Americans want in their governors. That issue extends beyond New Jersey. Governors are presidents on a small scale. Or perhaps not so small—just as America has stumbled in recent decades toward what Arthur Schles- inger Jr. called an “imperial presidency,” many states have seen the power of governorships expand exponentially. Governors shape and implement budgets with bottom lines in the hundreds of billions; they oversee vast bureaucracies; they often play central roles in the gerrymandering of legislative and congressional districts. Because of the decline in media coverage of statehouses, governors frequently work their will with scant scrutiny. But make no mistake, they do work their will.

Christie bragged in November, when he took over as chairman of the Republican Governors Association, that “all across America, Republican governors are doing what Washington can’t.” In hindsight, that reads like an invitation to an inquest; and even as the Bridgegate scandal exploded, there were reports that the office of the inspector general of the Department of Housing and Urban Development would investigate the use of Hurricane Sandy recovery funds to pay for New Jersey tourism ads that featured the governor and looked a lot like Christie campaign commercials. But it’s not just Christie who has used and abused a governorship for political purposes. Nor is this merely about the old-school politicization of office still practiced by governors of both parties, who routinely slap their names on signs announcing new projects and appoint underqualified retainers to top jobs. The governors who were swept into power by the “Republican wave” elections of 2009 and 2010 arrived with an expansive vision for how to use their authority, often exercised in conjunction with GOP-led legislatures, to shape a politics of reward and punishment.

Many of the new governors, including Wisconsin’s Scott Walker, Ohio’s John Kasich and South Carolina’s Nikki Haley, were veterans of the American Legislative Exchange Council, the corporate-funded “model legislation” machine that has for decades preached that state government can be used to consolidate conservative power. This background, along with a campaign-finance landscape that has made governors increasingly reliant on money from national conservatives and corporate interests, has fostered a take-no-prisoners political ethic. Following the lead of Christie—who’s been a favorite of conservative donors like the billionaire Koch brothers since his initial election in 2009—Republican governors elected in 2010 immediately went after the teachers, public employees and trial lawyers who were organized to defend public education, public services and the public’s right to hold corporations to account.

In states like Wisconsin, Ohio and Rick Snyder’s Michigan, they attacked collective bargaining rights directly. Only the most naïve observers missed the point that this was all about politics—that in the aftermath of the Supreme Court’s Citizens United ruling in 2010, freeing corporations to spend lavishly on elections, public sector unions were among the few groups with the resources to challenge the corporate agenda and the politicians who serve it. There was an equal measure of politics in the move by Maine Governor Paul LePage to eliminate that state’s decades-old same-day voter registration law; in the steps taken by Kasich’s Ohio allies to restrict early voting; and in the broad advocacy by Republican governors for restrictive voter-ID laws and a host of other measures that used the power of government to warp electoral processes and lock in partisan advantages. Florida Governor Rick Scott repeatedly sought to purge voter rolls in a manner that the nonpartisan Citizens for Responsibility and Ethics in Washington (CREW) noted “was found to disproportionately target minority, Democratic and independent voters.” Pennsylvania’s Tom Corbett even went so far as to entertain a scheme to rig his state’s approach to the Electoral College so that a presidential candidate who lost the popular vote there—more than likely a Republican—could still get the most electoral votes.

A number of GOP governors have come under scrutiny for restructuring economic development initiatives to limit transparency and aid allies. Maine’s LePage has faced a federal inquiry into whether he pressured state Unemployment Compensation Commission hearing officers to be more favorable to the businesses he says he represents. Georgia’s Nathan Deal has been accused of obstructing a state ethics commission investigation into charges of wrongdoing on the part of his campaign. Former aides to Wisconsin’s Walker have been convicted after inquiries into the abuse of public posts for political purposes. CREW says Corbett has “turned Pennsylvania’s state government into a favor mill for campaign supporters.”

Despite the best efforts of Barbara Buono, Christie was given a pass by too many Democrats and too many pundits in his re-election campaign last year. That casual approach to questions regarding the abuse of power should not apply in 2014, as governors like Corbett, Deal, Kasich, LePage, Scott and Walker face re-election. Voters deserve a higher standard of ethics from the politicians who serve them—and an alternative to the politics of reward and revenge.