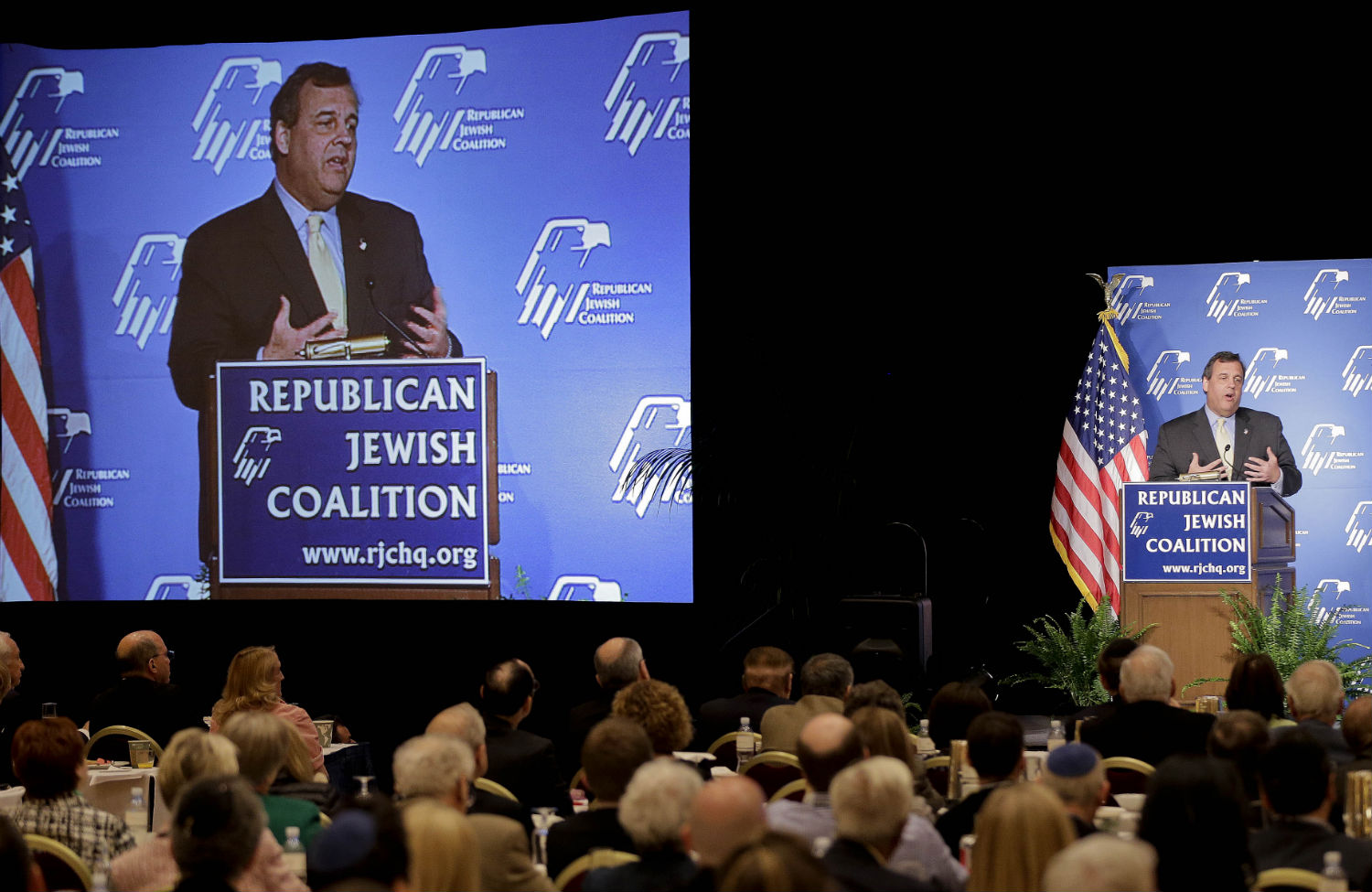 Hat in hand, three governors—and a former governor—went to pay homage to Sheldon Adelson at the meeting this past weekend of the Republican Jewish Coalition—“under the watchful eyes of a few hundred powerful Jewish donors,” as the Washington Post so delicately put it. Since the vast majority of American Jews vote Democratic, and pretty much always have, the “Republican” Jewish Coalition consists of a panoply of hawks and neoconservatives, none more hawkish than Adelson, who once called for the United States to drop a nuclear bomb on Iran to scare its leadership. But because Adelson may spend more than $100 million in 2016, the're all competing in "the Sheldon Primary."

And it was Christie, as regular readers of Christie Watch know, who had the most to prove. Christie arrived in Las Vegas for the RJC meeting following the release of a report by a law firm that he hired, Gibson Dunn & Crutcher, which the New Jersey governor touted as having cleared him of all wrongdoing except, perhaps, not knowing what his nefarious aides were up to.

Before heading west, Christie held his first news conference on Friday afternoon, the first time he’s met with the press since January 9, more than eleven weeks. (At the end of the news conference, Christie said, addressing the media: “I’d like to say I missed you. But I didn’t.”) From the tenor of that news conference, it’s clear that Christie believes that the path is now open for him to resume the national campaign that he’d intended to have started at the end of 2013, following his 60-percent-plus reelection win in November. Going forward, Christie said, the tangle of scandals surrounding Bridgegate and misuse of Sandy aid “will be a very small element, if it is any element at all.” And Christie added that outside of the New York-New Jersey region, where there is still intense interest in the scandal story, in the rest of the country no one cares. “There is significantly less interest around the country…than there is in this region,” he said. And in Iowa? “They love me in Iowa.”

Of course, the going is still tough for Christie, with the latest NBC News/Wall Street Journal poll finding that Christie’s personal rating is just 17 positive and 32 percent negative.

Before taking questions, Christie announced that one of the albatrosses hanging around his neck was gone. David Samson, the chairman of the Port Authority of New York and New Jersey, had resigned, Christie said. Since 2002, Christie and Samson have been close allies. That year, when Christie started as US attorney in New Jersey, Samson was New Jersey’s attorney general, and they bonded. Over the next decade, the two men increasingly drew closer, and in 2009 Samson ran Christie’s transition team, along with two other important players in Christie World: Jeffrey Chiesa, who’d been a law partner of Christie’s two decades ago at the firm Dughi & Hewit, and who’d served for years under Christie at the US attorney’s office; and Michele Brown, another assistant US attorney under Christie. Both Chiesa and Brown would get top jobs in the Christie administration, and Samson, of course, was named chairman of the Port Authority. In that post, he was able to work an inside/outside operation, overseeing billion-dollar PA contracts on projects that his firm, Wolff & Samson, represented. (Chiesa, who’d been a Wolff & Samson attorney earlier in his career, is back at the firm, along with Lori Grifa, a highly political lawyer who was Samson’s chief of staff when he was New Jersey attorney general in 2002. Grifa was a senior official in the Christie administration before going back to Wolff & Samson, where she’s been at the heart of the wheeling and dealing involving Wolff & Samson and the PA.)

Now that Samson is gone, Christie hopes that politicians, investigators, and the media will stop barking up that particular tree. But that’s unlikely. The current US attorney in New Jersey, Paul Fishman, has subpoenaed Samson, and there will be continuing inquiries about his role not only in Bridgegate but in the various conflicts-of-interest his firm was allegedly involved in. At least, from Christie’s point of view, Samson is out of the limelight.

In Las Vegas, Christie and the others—Scott Walker of Wisconsin and John Kasich, plus former Florida Governor Jeb Bush, who’s getting increased attention, says Fox News—all seem to have kowtowed to Adelson’s special brand of foreign policy hawkishness. But Adelson, who singlehandedly financed Newt Gingrich’s quixotic bid for the presidency in 2012, has declared his intention this time around to support a mainstream Republican candidate—such as Christie, Bush, Walker or Kasich, all of whom had private one-on-ones with Adelson—rather than someone from the GOP’s lunatic fringe: Rand Paul, Ted Cruz, et al. But the acid test is for someone who’ll join Adelson on his pro-Likud crusade vis-à-vis Israel and, more generally, adopt a warlike stance abroad. Toward that end, Dick Cheney and John Bolton also had high-profile roles at the RJC event, and Bolton blasted “the rising tide of neo-isolationism in the Republican party”—a comment aimed squarely at Paul. (It might have been aimed at Cruz, too, but no one really knows what the Tea Party ideologue thinks about anything except Obamacare, which he’s against.)

Christie, who’s hawkish in his way, is hardly an expert on foreign policy. (Of course, both George W. Bush and Barack Obama did not know anything about world affairs when they were elected.) In any case, when he addressed the public part of the RJC affair, Christie committed what counts as a gaffe in the weird world of pro-Israel hardliners, when he called the West Bank and Gaza “occupied territories.” Of course, that’s exactly what they are, but pro-Likud hardliners prefer the term “Judea and Samaria” when referring to the West Bank, since they believe—or pretend to—that the West Bank was given to the Jews back in Biblical times. But, later, in his knee-bending meeting with Adelson, Christie said —according to the Jewish Telegraph Agency—that he “misspoke when he referred to the ‘occupied territories.’” That apology ought to be worth at least a billion dollars from Adelson.