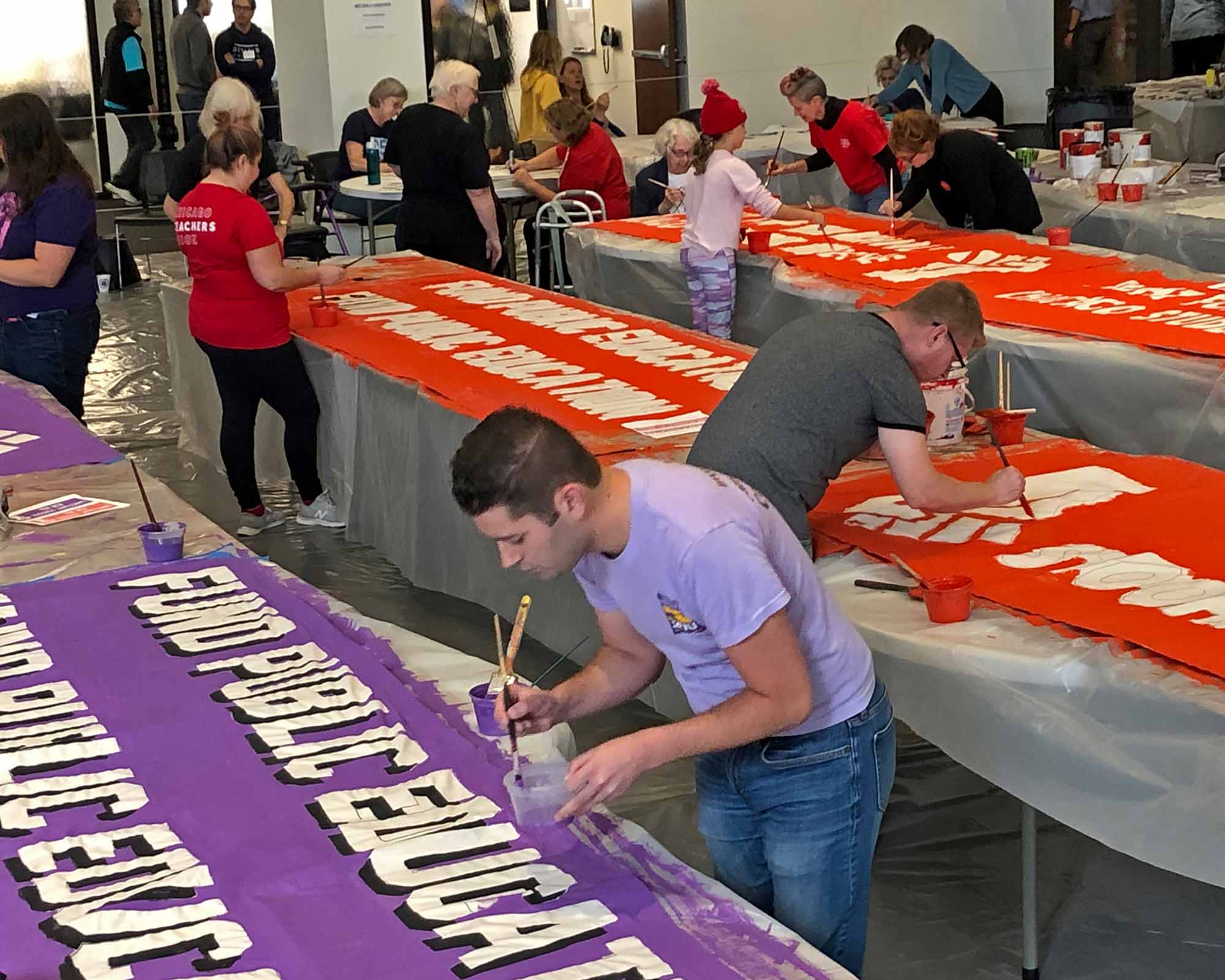 William Estrada was inking the silk screen in front of him in the Chicago Teachers Union (CTU) hall, but he was thinking about what he wouldn’t see when he was back in his classroom on Monday.1

“Teachers and parents have to fight for very simple things that we shouldn’t have to fight for, like materials or chairs and tables,” he said, speaking of one of the everyday challenges at schools like Telpochcalli Elementary School on the city’s Southwest Side.2 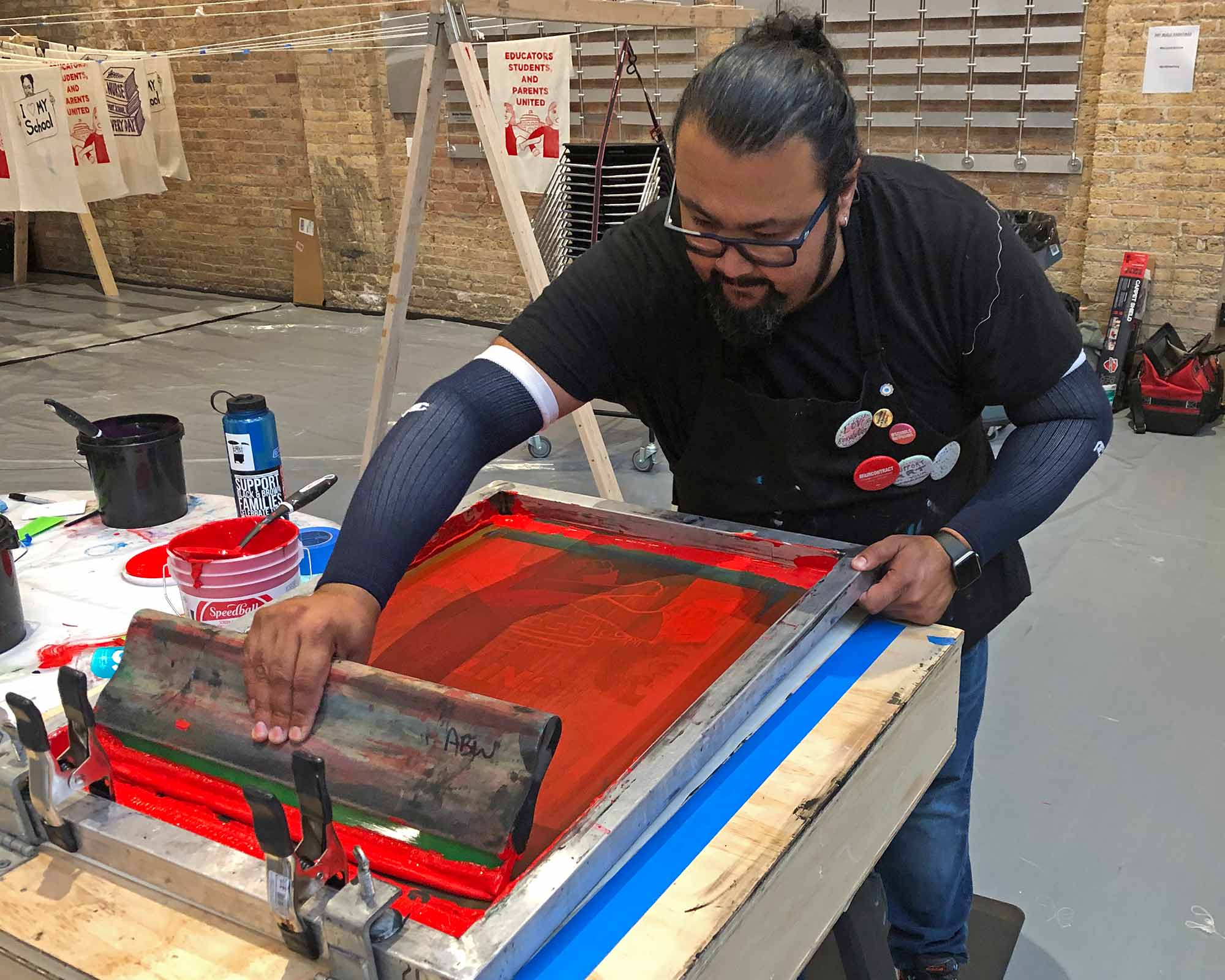 Estrada teaches visual arts to classes as large as 36 students, and he doesn’t have enough chairs to go around, much less supplies. “The chairs that we have in my classroom, we actually got them out of storage from other schools that closed down because we didn’t have enough money to buy them ourselves,” he says. “We want to make sure we’re given the resources that we need in order for us to do our job and to support the students and the needs that they have.”3

Estrada was making silk-screened signs with the slogan “Educators, students, and parents united” at an “art build” held by the CTU and Service Employees International Union (SEIU) Local 73 to produce banners and signs as their contract battle with Chicago Public Schools (CPS) comes to a head. The two unions have set a strike date of October 17 that could put 35,000 workers on the picket line.4

The slogans on the banners draped across tables and taped to walls testified to the unions’ determination that this contract battle not be about wages and benefits alone but getting what the CTU has been insisting on since its historic 2012 strike: “The schools Chicago students deserve.”5 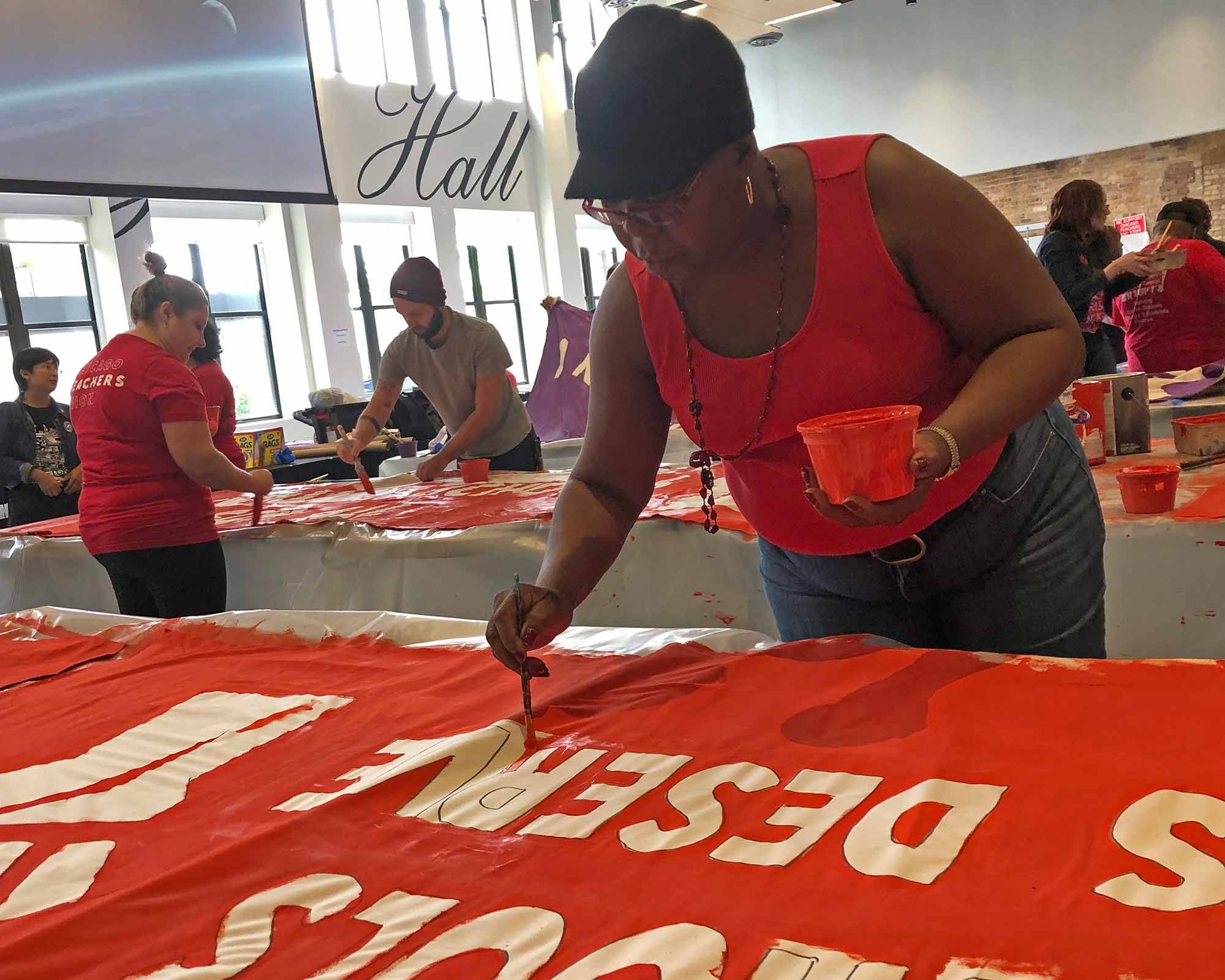 Delphine Hill paused from painting that very slogan on a street-size banner to talk about another all-too-typical problem at Bouchet Academy, where she is in her 29th year as a teacher’s assistant. Students at the South Side elementary school come in suffering the effects of trauma and violence, but “they have to wait days or weeks to see a social worker,” she said. “That’s why we need a social worker in every school, five days a week. And a nurse assigned to every school.”6

The CPS is woefully understaffed in these positions. Barely one in five schools has a librarian, for example, and the shortage is mostly on the South and West Sides in predominantly black and Latino neighborhoods. The CTU wants a commitment to adequate staffing written into the contract, along with enforceable caps on class sizes.7

Chicago’s new mayor, Lori Lightfoot, ran for election on a promise of transforming public schools, including hiring hundreds of people for support staff positions. But she and school officials say they won’t put their promises in writing—because they don’t have to. A 1995 state law that put the CPS under mayoral control places draconian restrictions on what public school unions in Chicago, unlike every other school district in the state, can negotiate beyond pay and benefits.8

The union members at the art build would tell you salaries are an important issue—and the CPS’s offer not quite as generous as Lightfoot makes out—especially for lower-paid paraprofessionals like Maurice Brownridge, a special-education classroom assistant at Cassell Elementary School on the far Southwest Side. He is a member of SEIU Local 73, which points out that the average yearly salary of the special-education classroom assistants it represents barely reaches the level classified by the US Department of Housing and Urban Development as “very low income” for a family of two in the Chicago area.9 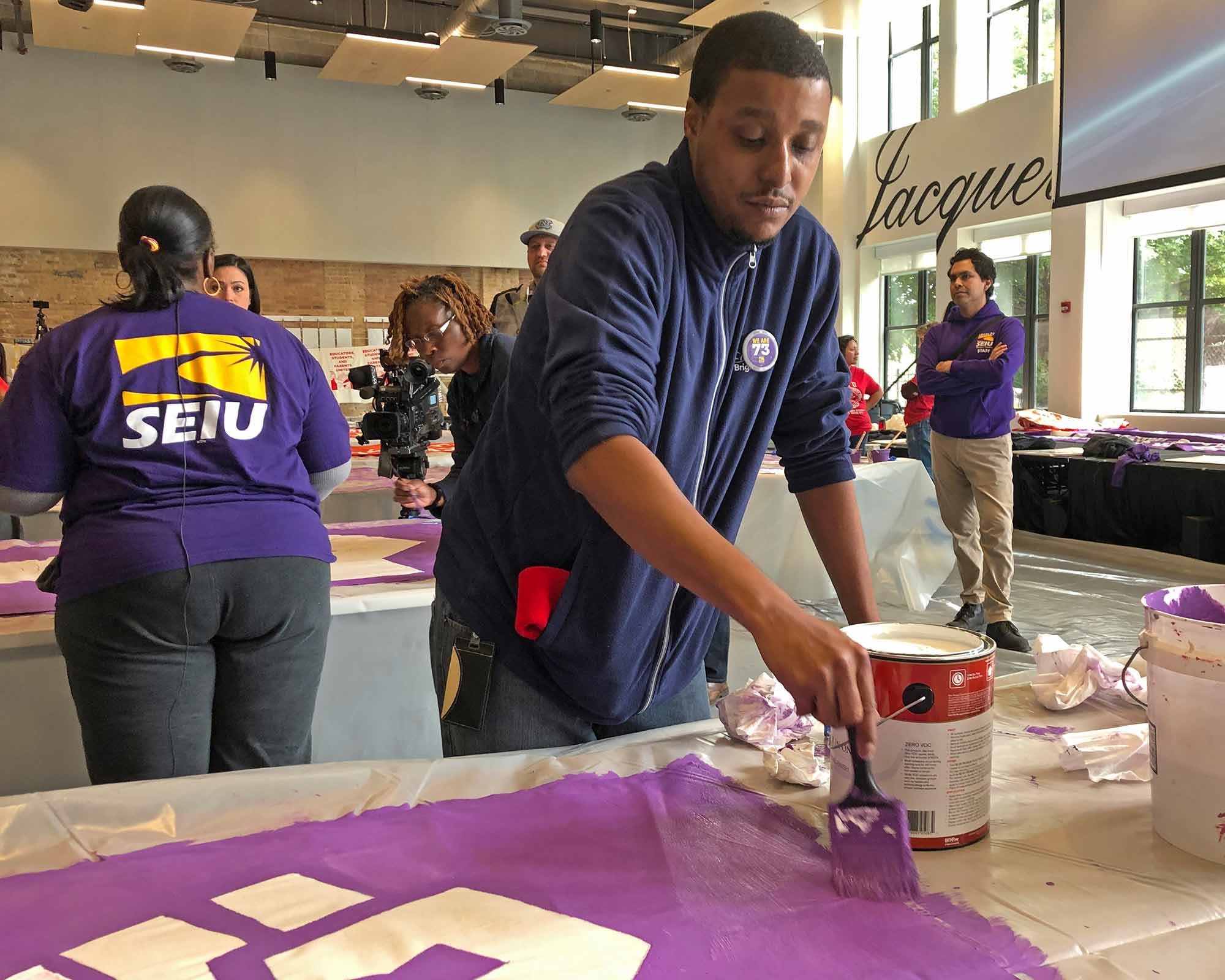 “Will I keep doing this job?” Brownridge said as he finished up a banner painted in SEIU purple. “I love working with kids. But can I afford to keep doing this?” Still, he said, “we’re fighting not just for more pay but for the students and just for respect.”10

Respect was on the mind of Kitty Conte as she put the final touches on a placard—this one featuring her version of the famous image of a school of little fish united to go after a big fish that she labeled “Lori.” Like other CTU members, Conte, a 27-year visual arts teacher at Ravenswood Elementary School was angry about the city’s proposal to take away prep time, a hard-won achievement of the 2012 strike.11 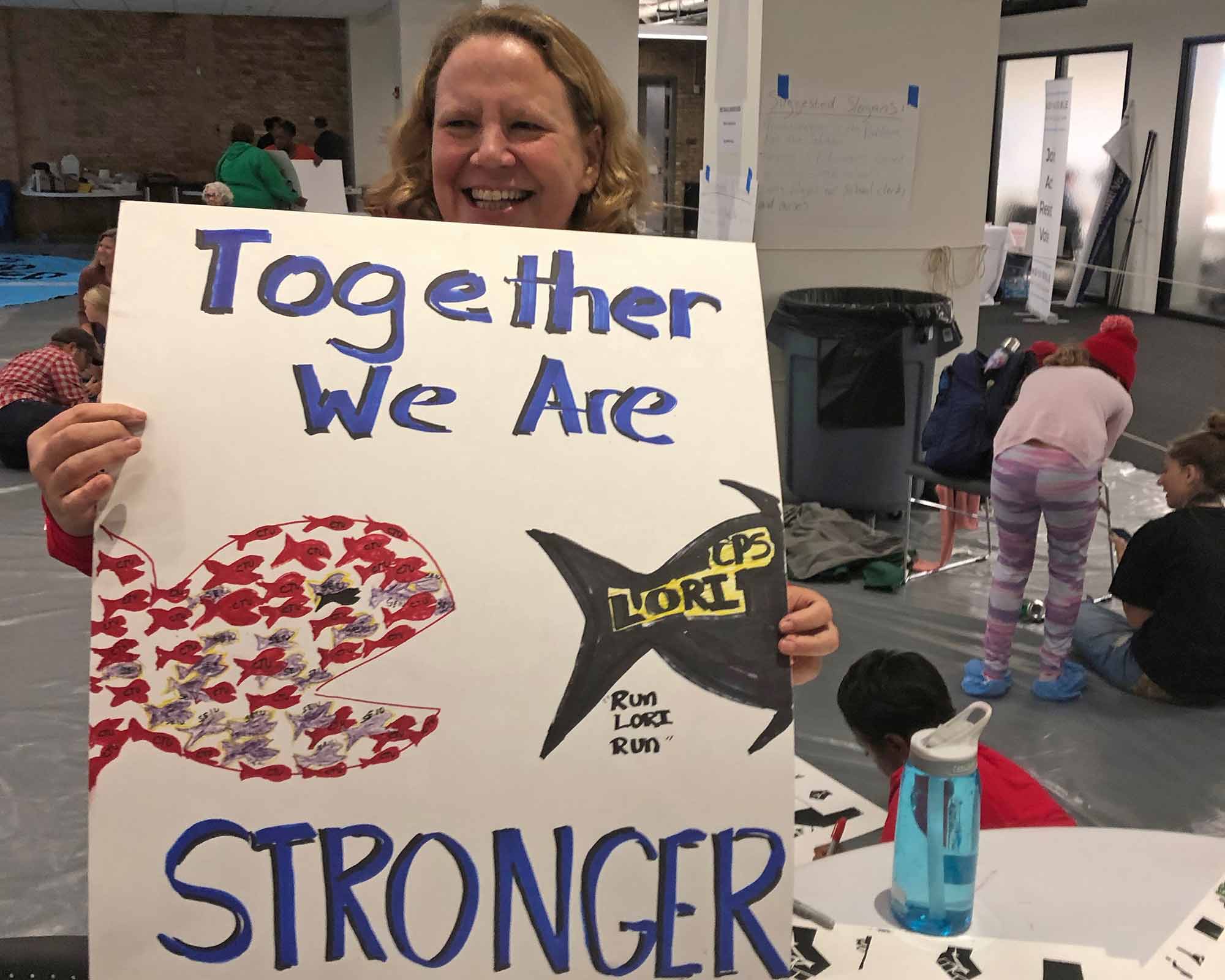 Conte ticked off the tasks that take over her prep periods and lunchtime, too, saying, “We e-mail parents. We plan field trips. We wash paintbrushes. We grade papers. We clean up after kids. We deal with social and emotional issues for kids who need our help outside of classroom time. That’s where I spend most of my time—with students who need a safe space because playground’s not fun for them. So they’ll be in my room doing art or whatever. And I’m fine with that. But you start to count the number of hours you’re doing stuff like that, and then you think, ‘Why would they take prep away from us?’ I mean, I’m here at midnight hanging artwork for a show. I don’t understand why they have such distrust in us.”12

Tsolkeyah Dixon, a special-education teacher at Hyde Park Academy High School on the South Side, was wondering what happened to the mayoral candidate who said she was “going to see to it that these things change, but now it seems like, ‘Whoa, not so fast, not just yet.’”13

Dixon was helping to paint the CTU’s logo, side by side with the SEIU’s, on another giant banner. “Help us help those students,” she said, summarizing the unions’ appeal to the mayor. “I don’t think that’s too much to ask for. Ms. Lightfoot had wonderful teachers in her life. She’s able to be in the position she is now because of teachers, because somebody believed in her and supported her. That’s the same thing that CTU teachers are asking for every other student.”14 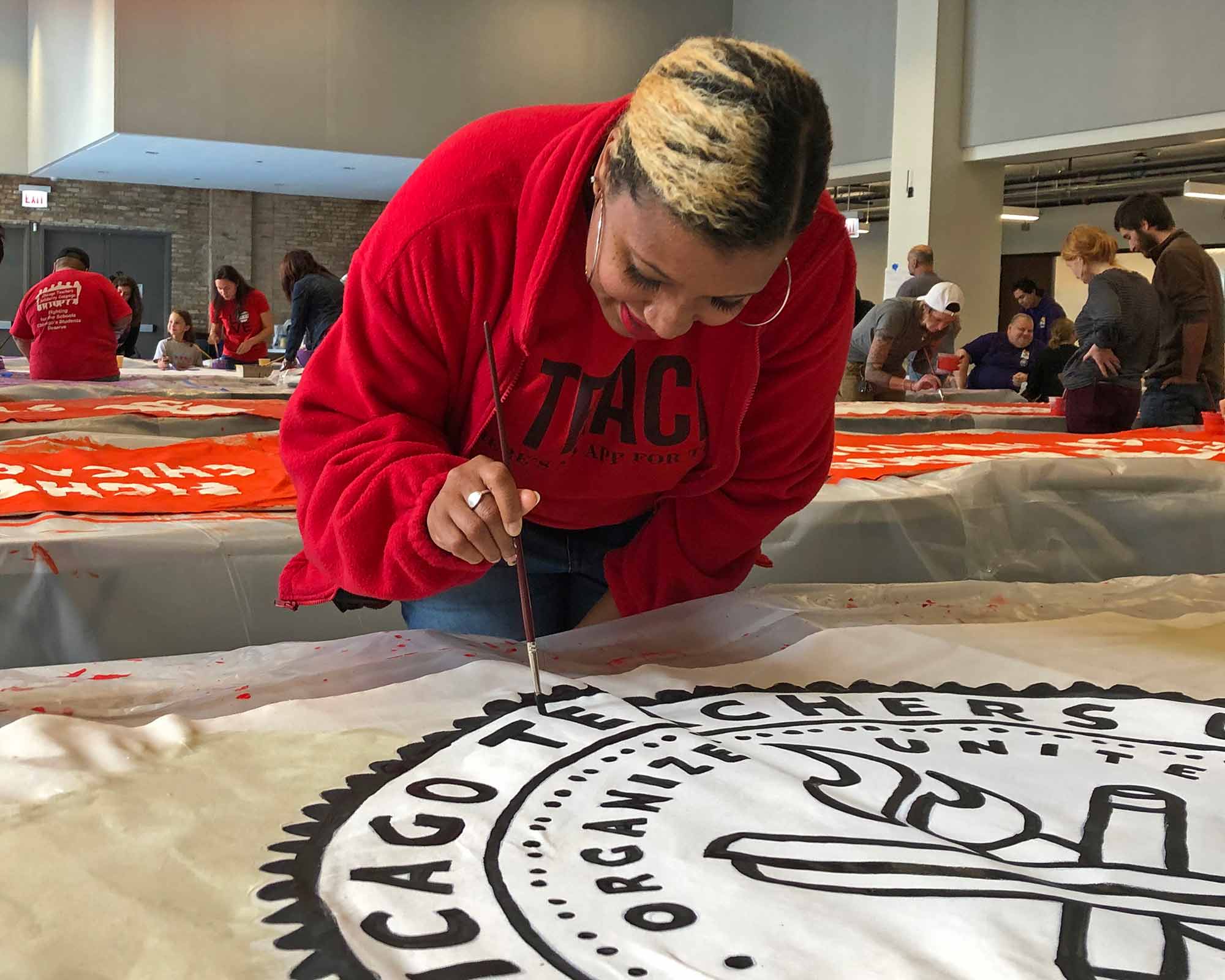